Welcome to Khagol Mandal, Gateway to the Cosmos

The International Astronomical Union recognised the efforts of this group, based in Mumbai, and gave them a grant for their pioneering ‘Astronomers on Foot’ programme. 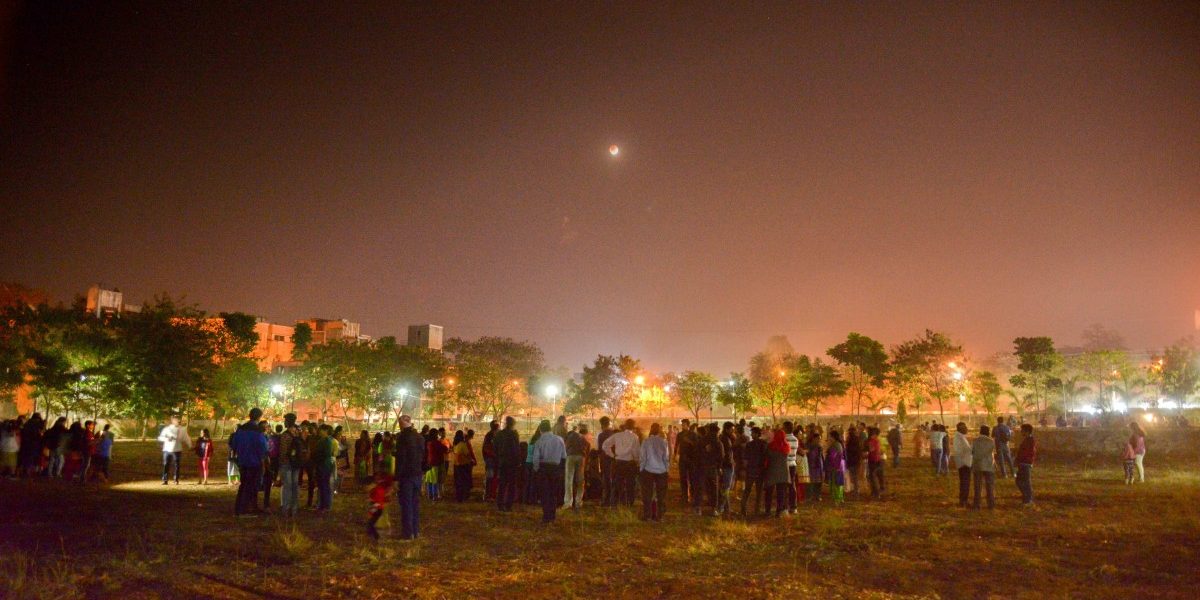 Every Wednesday evening, a group of people meet at Sadhana Vidyalaya in Sion, Mumbai, to consider matters relating to the sky. This meeting, from 6.30 pm to 8.30 pm, gives them a glimpse into the movement of planets and stars, meteors and comets, and the many ways in which they’re studied.

On Sunday evenings, another similarly inclined group meets at the Vidya Prabodhini School in Nashik from 6 pm to 8 pm.

These meetings have been taking place since 1985, when a group of friends got together and formed an organisation called Khagol Mandal. Its mission is to popularise astronomy. Earlier this year, the International Astronomical Union (IAU) recognised this group’s efforts and gave them a grant for their ‘Astronomers on Foot’ programme.

“Khagol Mandal was set up by a group of six people led by Dilip Joshi,” to Abhay Deshpande, the group’s honorary coordinator. “Four of them were from a non-science background, and two of them from science. We provide a forum where people can interact with each other, bringing their queries and discoveries and discoveries about astronomy, they can listen to lectures, go on trips where we see the sky through the telescope, and have questions answered by scientists.”

He said that about 25 people regularly attend its Mumbai meetings and around 40, the ones at Nashik. Khagol Mandal also conducts “dozens of programmes and sky shows” attended by numerous others.

The astronomers on foot

When they first began, Khagol Mandal was active in six different centres: Mumbai, Thane, Panvel, Dombivli, Badlapur and Nashik. In 1995, they merged the centres in the Mumbai region, and the one in Nashik extended its activities to areas adjoining the district.

In this setup, they have identified the coastal belt of Ratnagiri and Sindhudurg districts as the focus of their ‘Astronomers on Foot’ programme. They also plan to cover the tribal areas of Malegaon and Nandurbar. Members of the group say  they have drafted the roadmap to achieve these objectives, not surprising given they’ve been active for  three decades.

Step one is to identify trainees at  schools, NGOs and other institutions. These people will be trained to  handle telescopes and make popular science presentations. Once they’ve completed these lessons, they’ll ‘graduate’ to basic astronomy classes. Finally, they will be  prepared to conduct their own sky shows and lecture demonstrations.

One measure of Khagol Mandal’s impact is the way it has changed the lives of the people involved with it, especially after they first learn about astronomy as students.

According to Deshpande, 18 have completed their PhDs (in the sciences) after they first began participating in the group’s activities. Deshpande himself started attending the meetings soon after he completed class X, and when Khagol Mandal was only four years old.

After joining, he became more interested in physics and he went on to get an MSc in theoretical nuclear physics. He became a research scientist for the Government of India in 1997 and started working as an accelerator physicist. He finally completed his PhD in Japan.

“There are many of us who joined as basic volunteers when we were students and went on to undertake long-term study and research,” he said. “Our focus is to understand what is happening around us, not just the maths or the physics.”

To this end, Khagol Mandal also helps organise classroom lessons, where students learn physics and astrophysics, calculate the planets’ positions and movements and understand the astronomical foundations of certain festivals. All of this is more informal, and interactive, and deliberately steers clear of  dry theoretical lectures. “This is what keeps the younger volunteers engaged and curious,” Deshpande added.

Archana Pai, an associate professor in IIT Powai’s department of physics, agreed. She became involved with Khagol Mandal during her days as an undergraduate in the 1990s. “It provides a platform for students interested in astronomy to interact with each other and at times with experts in the field of astronomy.” 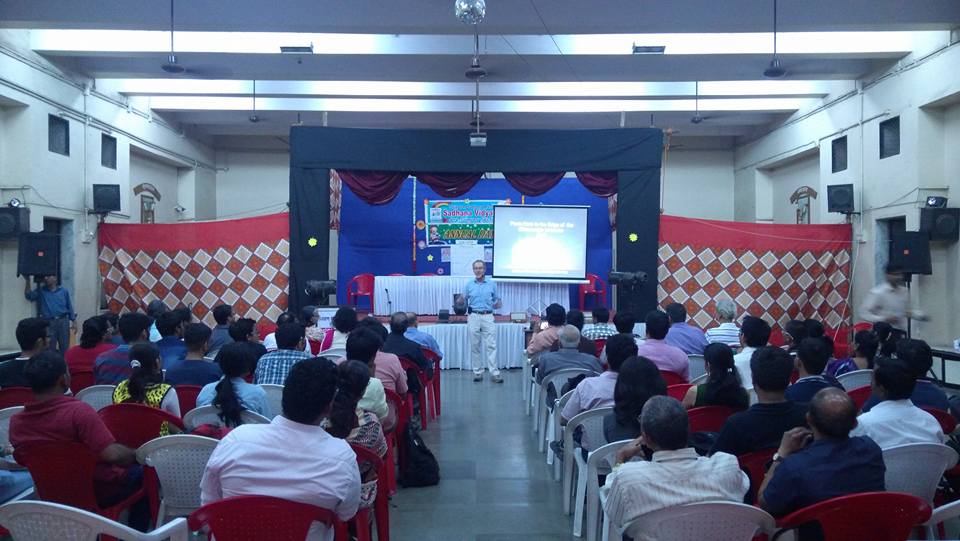 She used to go on stargazing trips – organised by the group – in Vangani, near Karjat, first as a learner and then as a volunteer. “I enjoyed all those star parties,” she said. “As an outcome of those sessions, I started getting more and more curious about our universe” – ultimately paving the way for her to become a scientist of gravitational wave astronomy.

Because of the way it has structured its programmes, Khagol Mandal also helps its members become better public speakers, event managers and telescope operators.

Sunit Jadhav, a 21-year-old BSc student, said that the group’s courses like  “basic astronomy and spherical astronomy have helped” him academically. “I would say we are definitely part of a learning process, with activities that increase our interest in theoretical and observational astronomy.

“I believe very strongly in popularising science and it’s wonderful that I have been encouraged … and given the opportunity to do my part at Khagol Mandal.”

Seen another way, Khagol Mandal’s informality has allowed the group to get the  people’s attention for reasons other than astronomy as well.

“One group is very interested in photography. They want most of all to see through the telescope and observe the shapes and sights of space,” Deshpande said. Astrophysics concepts and lectures don’t appeal to them. Another group is very interested in the positions of the planets and stars, and to calculate their changes. We do not discourage any such special interests.”

Because they’ve been around for so long, the group’s members now count  many professional astronomers in their ranks, as well as scientists working in other fields. And  “these people bring us the latest information and insights”.

This way, Khagol Mandal nurtures  what begins as a passing interest in astronomy into a greater engagement with science at multiple levels.

Also read: Tribal Astronomy in Ancient India and the Stories in Our Stars And when the IAU grant comes through, it will mark the first time Khagol Mandal will have received money – from any source. “We are still looking into the process of receiving it,” Deshpande said.

The group’s emphasis has remained since 1985 on participation, so while they do charge a nominal fee to participate in some of their programmes,  many others are free. The group’s founders have also agreed that seeking funds could dilute their purpose.

They take telescopes along to every programme they conduct in different sites, and usually complete around 100 programmes between October and May. These include lectures, talk shows and sky shows. About 40 of them are only on astronomy, and about half of those are conducted overnight.

Khagol Mandal also has pride of place in the certificate course on astronomy at the University of Mumbai, since 1994. Out of 30 lectures delivered in this course every year, at least 18 are by Khagol Mandal speakers.

In fact, they also respond to every call they receive from various institutions, such as the Marathi Vigyan Parishad, to set up telescopes to observe  celestial events like meteoroid showers, planet transits, eclipses, etc. And these events are open to all. phenomena.

Lessons about taking science to the people

Taking scientific knowledge into communities often evokes new challenges. Of late, even august events like the Indian Science Congress have witnessed clashes between  the claims of India’s ancient scientific self-sufficiency and the manner in which modern science has evolved in the West.

At Khagol Mandal, where people with different levels of knowledge about different things, and even different interests, congregate, their questions are handled with care. 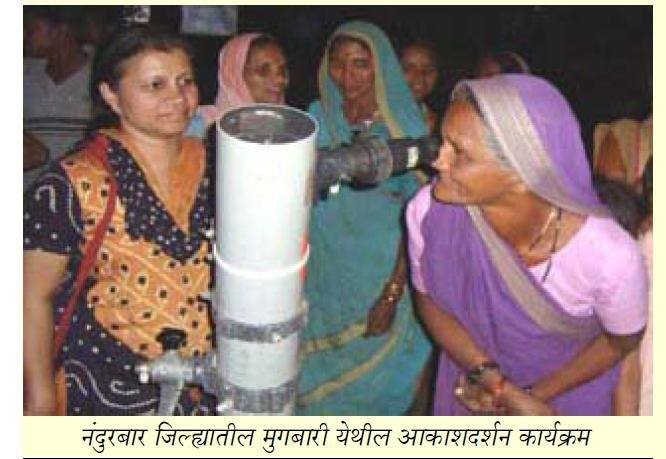 “We don’t attempt to correct anyone’s perception or argue against their beliefs in our programmes,” Deshpande said “We only explain what we have understood in a scientific sense. Occasionally, people do ask us awkward questions or show a clear preference for something not based in science.”

But such occasions are actively prevented from becoming confrontational “In our view, confrontation only produces negativity.” They’re careful about not disrespecting traditional knowledge either. And “by consistently emphasising the scientific and logical, we hope for more long-term changes in people’s thinking”.

Meanwhile, Khagol Mandal deals with people from rural and tribal areas through its activities in the Nashik region. These people may be illiterate but tend to be very knowledgeable about living with nature. The activities are coordinated by Milind Babar and Sujata Babar, both of whom have spent many years working with communities at the grassroots.

Nashik is surrounded by tribal settlements in three directions, and many Khagol Mandal programmes take place in semi-urban or rural areas.

“When we started astronomy activities in Nashik, we were keen to take these activities to the tribal areas also. This is because we wanted to share what we know and learn from them also,” Sujata said. “We don’t consider ourselves only as givers of knowledge. It is a two-way process.

She recalled a story from 1996. “We were preparing to sight the Hale-Bopp comet,” expected to be visible from the next year, “and were giving slideshows and talks to build awareness, when members of the tribal community spoke to us.

“We realised that they already knew about comets. Similarly, when we mentioned the Orion constellation, called ‘Mruga’ in Marathi, they said the tribal name for it was ‘khatla’, or ‘patla’, which means a cot.” She said that that actually sounded more appropriate “because that’s how it looks”.

Sujata said they made sure they remained constantly aware of the fact that adopting the wrong attitude could effectively alienate the tribal communities. It wasn’t like the conventional teacher-student relationship but more akin to a teacher-teacher one:  ““I always feel that people have their own logic, they have some knowledge of astronomy, and whatever knowledge they have, we have to build on top of that by sharing our own.”

“We are all learning.”

With their gaze turned towards the sky and their feet firmly rooted in the ground, the amateur astronomers of Khagol Mandal show an increasingly divided world a better way to learn together.