We Know Roundworms Inherit Knowledge. Now We're Starting to Find Out How.

The idea that changes in the nervous system can have consequences beyond one's lifetime raises as many philosophical questions as scientific. 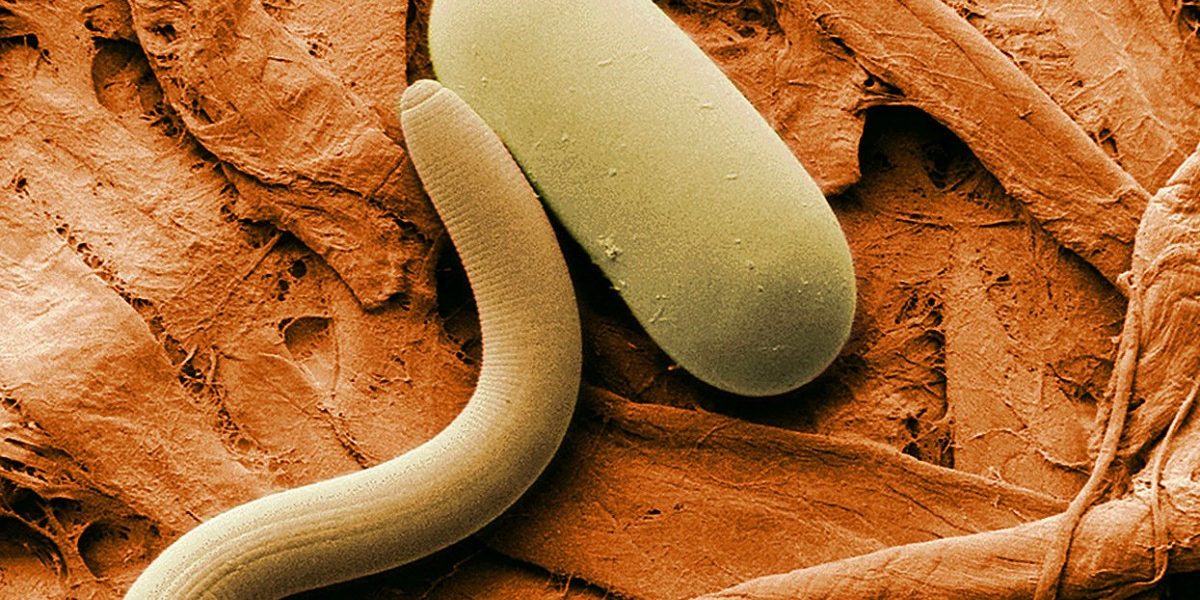 A scanning electron micrograph of a soybean cyst nematode (a type of roundworm) and its egg. Photo: USDA

When August Weismann’s The Germ Plasm: A Theory of Inheritance was published in 1892, there was controversy. The book contains the first description of the Weismann barrier: the purportedly strict barrier between germ cells, i.e. sperm and eggs, and the other cells, a.k.a. soma, accompanied by the notion that changes to the soma didn’t affect the germ cells.

Biologists hotly contested this idea for many years, but with more experiments, scientists began to find that Weismann was right. In fact, the Weismann barrier is today encapsulated in the so-called second law of biology.

And over the last few years, scientists have been chipping away at this central tenet.

They have found that different forms of stress can influence an individual’s germline. Why, studies in roundworms have even shown that these nematodes are able to inherit the memories of their ancestors over many generations.

A new study, by Oded Rechavi of Tel Aviv University, Israel, and his teammates looked at whether changes in the nervous system of roundworms could affect its germline. He and his team found that the Weismann barrier was being breached by short sequences of RNA called siRNA.

siRNAs are molecules that fine-tune how genes are expressed in a cell. In roundworms, a protein called RDE-4 synthesises siRNA. Following usual notation, the gene that enable the creation of the RDE-4 protein is called rde-4.

To check whether neuronal activity affected the germline, Rechavi and his team engineered roundworms that expressed rde-4 only in the neurons, nowhere else. This effectively meant these worms would make siRNA only in their neurons.

When they checked the gonads (the tissue which contains heritable information) of these worms, they found that around 1,000 siRNAs had been altered as compared to the control worms and 189 of them had been inherited down till the third generation.

To make sense of how these siRNAs were affecting the genes, Rechavi and co. sequenced the worms’ mRNA, an intermediary molecule between genes and the protein the genes code for. They found that 124 germline genes had been hit in these engineered worms; of them, five had been inherited up to their grandchildren.

They also observed an interesting pattern between the engineered worms, which expressed rde-4 only in the neurons, and worms that did not express rde-4 at all. The engineered worms were good at foraging for food at higher temperatures – i.e. they could withstand environmental stress better – than the control worms.

This unusual behaviour had to have had something to do with one of the five affected genes, and their attention turned immediately to a gene called saeg-2. saeg-2 has been known to be associated with foraging behaviour in roundworms.

They found that the worms with no rde-4 expression were producing no siRNA. This in turn left the saeg-2 gene to be over-expressed, which in turn led to poor foraging.

Rechavi’s team found that the descendants of the engineered worms had inherited the siRNAs from their ancestors.

This study follows in the steps of previous ones where scientists have found that worms’ behaviour can often be inherited across generations.

For example, Coleen Murphy, a geneticist at Princeton University who also studies transgenerational inheritance in roundworms, has found that when a worm learns of a way to avoid a certain pathogen, its descendants also inherit that knowledge.

When asked if the worms’ responses to the pathogen in her study could arise in the nervous system, Murphy told The Wire, “Our process does clearly involve neurons, since it’s a learned avoidance that is passed on.” She continued, “Right now, it’s difficult to know if the nervous system responses [Rechavi’s] group found are completely independent or are instead a sub-part of the overall process that we are examining.”

These studies raise important questions related to evolutionary survival. A worm born knowing that it should avoid a harmful pathogen has better chances at surviving than another worm that is yet to learn it.

But Rechavi is more cautious. “We shouldn’t fall into the old teleological trap,” he said, referring to the philosophical principle whereby an entity’s property or behaviour is explained in terms of its ultimate purpose as interpreted by humans (e.g., “god gave us eyes so we can see”). The worms can also inherit information that isn’t useful for their survival, maybe even counterproductive. “Organisms can’t predict the future,” Rechavi said, but “the nervous system is unique because it can plan, so if this planning works well, it might be adaptive.”

“There are many big questions to study still; for example, to what degree is the mechanism we discovered in worms conserved in other organisms, and in mammals in particular,” he added.

The idea that changes in the nervous system can have consequences beyond one’s lifetime raises as many philosophical questions as scientific.