New roads in Pune, Kolkata, Vijayawada, Coimbatore, Mumbai and other cities have left their people increasingly disconnected, and rendered themselves friendlier to cars than to pedestrians. 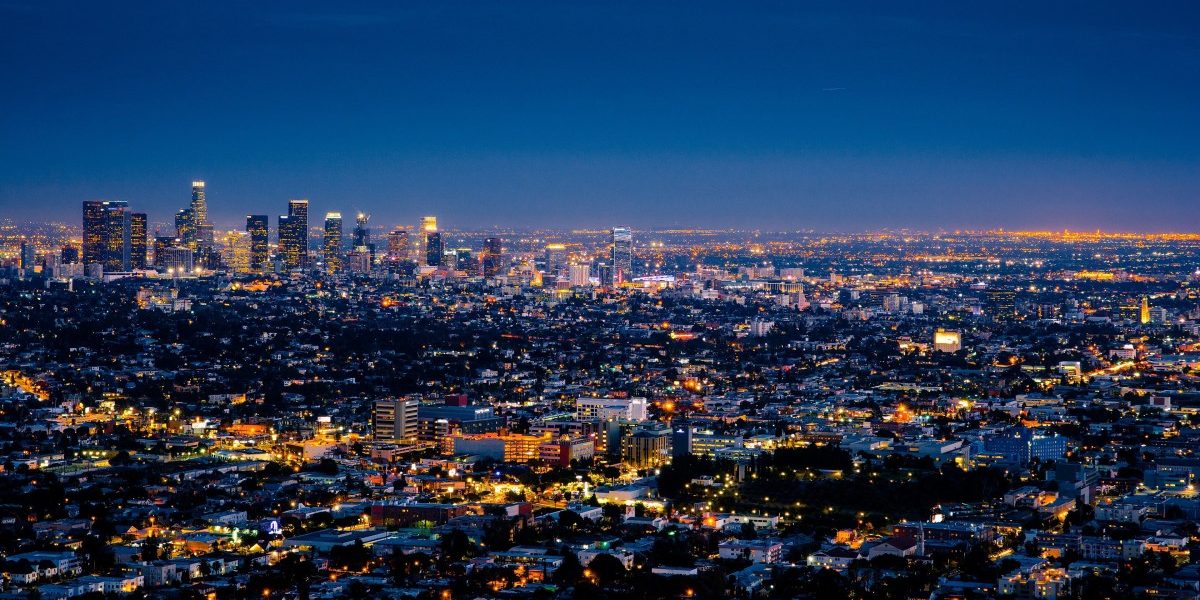 Not using space efficiently, such as by building sprawling cities that optimise neither for distance travelled within nor time spent not stuck in traffic jams, could be a climate offence. Photo: Henning Witzel/Unsplash

Bengaluru: In August 2019, the Intergovernmental Panel on Climate Change released a landmark report on land-use change around the world, discussing the many connections between the way humans have used Earth’s surface for various purposes and its increasing temperature, a.k.a. global heating.

Through these relationships, the report recalled an oft-forgotten factoid: of all the resources available to humans, land is the most precious because it’s the most limited. There are of course vast tracts still potentially available to commercialise but there’s no way we can step on them without disastrous consequences for ourselves, nor is there a way for us to get more land (short of inducing tectonic changes).

This is why, and how, not using space efficiently or, worse, wastefully, could be a climate offence – all the way from using large cars to transport as few people as possible to building sprawling cities that optimise neither for distance travelled within nor time spent not stuck in traffic jams.

India itself doesn’t need any reminders: every winter, its national capital region (NCR) is smothered in a thick blanket of smog. Irrespective of the extent to which vehicular emissions contribute to this nightmare, the people’s health is more endangered the longer they are forced to spend outdoors. Many Indians also acknowledge that right now it’s the NCR, but soon enough, it’s also going to be other regions because even if Delhi is plagued by a unique combination of pollution sources, the underlying problems – urbanisation, industrialisation, wanton ‘growth’, consumption and waste generation – are everywhere, just manifested in different forms.

A new study suggests the first of these cities could be Pune, Kolkata, Vijayawada, Coimbatore, Mumbai, Kozhikode and Singrauli.

The study itself evaluates the urban sprawl of various cities and countries based on the extent to which new roads laid in these places since 1975 are disconnected. In other words, with the length of roads laid as a proxy for urban growth, the authors – from McGill University, Montreal and the University of California, Santa Cruz – have been able to calculate a ‘disconnectedness number’ based on how the roads ease, or worsen, intracity commuting.

“There is no disagreement with the paper – that newly developed areas have disconnected road networks,” Raj Bhagat Palanichamy, a GIS and remote-sensing analyst with the WRI India Ross Center, Bengaluru, told The Wire. “Most of India’s urbanisation has been unplanned, which is the root cause of the issue.”

It’s not a single point of failure, either. “The pace at which new services have been provisioned in newly urbanised areas” has been slower. Palanichamy added that the World Resources Institute India, where he works, also came to the same conclusions as the study in projects “where we’re trying to intervene and find solutions to complete the road network – a lack of which is causing traffic-related issues.”

Of the 174 cities that topped the study’s unenviable list, 13 are from India (including the seven listed above), with a total population of 48 million people in 2011. Pune is at #15 (next to Sao Paulo), Kanpur at #158 (comparable to Tokyo), and the others are nearly evenly spaced in between. Suva in Fiji and Caracas in Venezuela are at the top.

Building on another study they were part of in 2019, the authors centre their analysis on a number called the street-network disconnectedness index (SNDi). The SNDi in turn combines the extent to which streets intersect, the relative number of grid cells, dead-ends and other road-specific features, the circuitousness of unique routes and density. The authors then drew from multiple data sources to piece together a global SNDi map, including government records, Landsat satellite imagery, the European Commission’s Global Human Settlement Layer, the Atlas of Urban Expansion, etc.

All together, a higher SNDi does not necessarily imply that the corresponding city is larger but more specifically that its growth is inefficient because it’s sprawling.

So how much is the world sprawling? 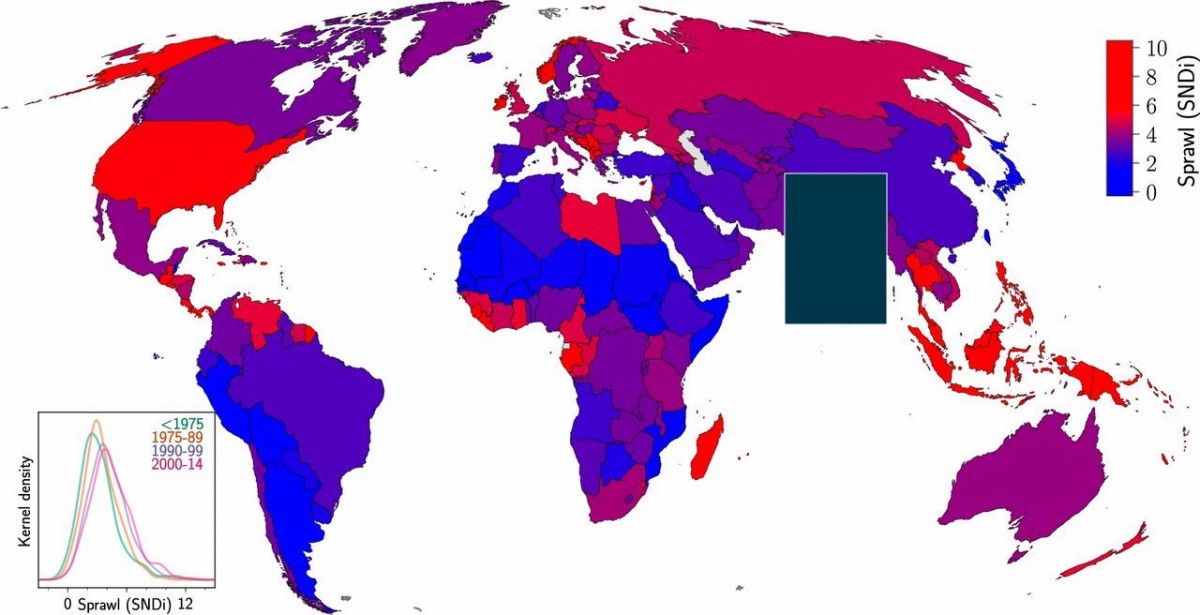 The Wire has masked the map of India because the depicted boundaries don’t conform to the map required by law. Its shade in the original map is quite similar to that of Tanzania. DOI: 10.1073/pnas.1905232116

Two features stand out immediately. First, the US is the largest high-SNDi country by far; countries that are just as red are all small, not even medium-sized. Second, of all the island countries, Japan not only has the lowest SNDi but also that its SNDi is far lower than the apparent average. Both these extremes are the result of common factors, especially the most common mode of transport.

The authors write in their paper, published on January 14, 2020, “That the US stands out for its disconnected streets comes as no surprise given the large literature on its automobile-oriented development patterns.” A higher SNDi implies broadly that in, say, one hour, an individual can visit fewer locations in a given area than using a road network with lower SNDi. People prefer traversing lower SNDi networks via car than by cycle or walking to be able to visit the same number of locations in the same period, thus also increasing pollution.

A common type of network in India was found to be the broken grid, typified by incomplete paths, open grid cells and a staggered arrangement that renders blocks whose edges and intersections don’t line up very well. Middle-class aspirations in the form of more and larger gated communities, office complexes and other greenfield properties in suburban areas share some of the blame. 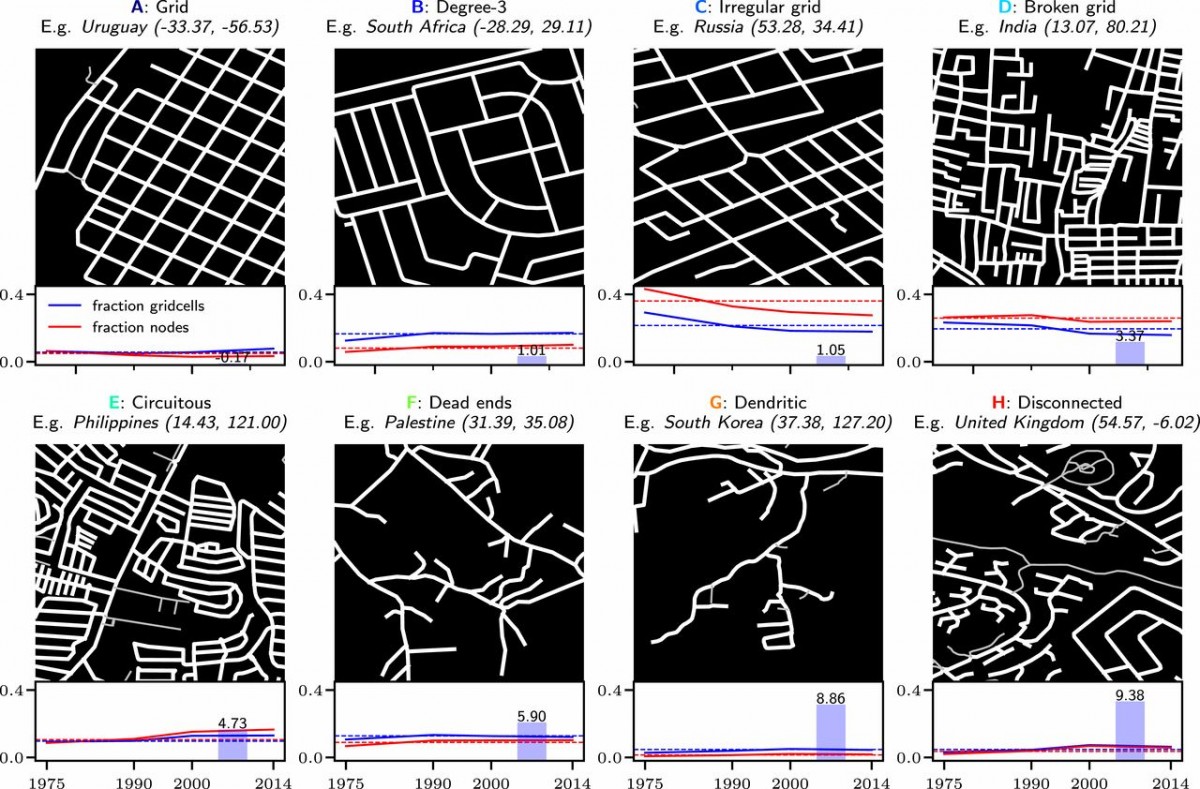 The authors also note that while India and China had a similar SNDi in 1975, India has since been becoming less connected. Part of the answer lies with how India’s road network has been growing: with longer distances participating in fewer intersections and getting involved in circular routes. As a result, both India and China are becoming more sprawling but the data suggests India is getting worse faster.

The second important detail pertaining to India’s growth is that the country’s SNDi rose gently between 1975 and 1989, then sharply until 1999, and then continued to rise at nearly the same rate until 2013 (where the study’s data ends). The other very populous countries with similar expansion trends include Brazil, Russia, Bangladesh and Indonesia.

However, Palanichamy signalled caution vis-à-vis the authors’ map of choice: OpenStreetMap (OSM), an open-source, crowd-sourced project in which volunteers add geographic data to a common map – like a Wikipedia for cartography. Because OSM is crowd-sourced, it’s more accurate in places where there are bigger crowds.

For example, this is how Jalna, Maharashtra, looks on OSM versus Google Maps – an example Palanichamy provided: 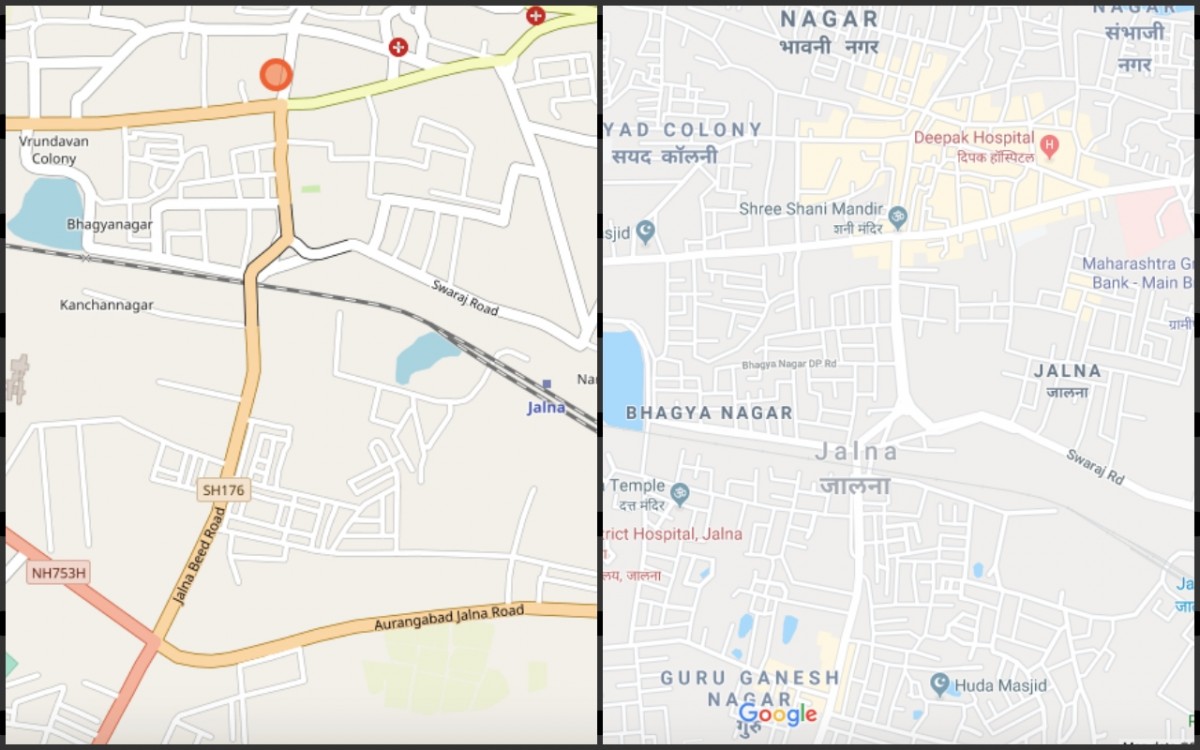 Thus, “the methodology of this study is likely to have overestimated the crisis in India,” he said. OSM “is relatively incomplete in newly urbanised areas, rural areas” and other places where internet connectivity is inadequate, so fewer volunteers get online from there. And since “the [map’s] completeness varies with country, locality and also between cities, a comparative study might not be very accurate.”

Finally, even if Indian policymakers decide to institute corrective measures – i.e. to reduce sprawl, improve connectedness and favour pedestrian movement – they must do so right away because they can’t change the layout of existing road networks, and new networks have a tendency to replicate the preexisting structure. In effect, cities that have been growing in a sort of haphazard manner become with time a tsunami of disorder.

The data – especially from Japan in the developed world and Latin America in the developing – suggests urban sprawl is not inevitable. “Their experience suggests that building connected streets can achieve not just environmental goals, but can also contribute to vibrant, economically prosperous urban centres,” the authors write.

Indeed, it’s not a coincidence that poor urban planning adversely affects both social and environmental wellbeing. Planners have argued that well-designed cities should, among other things, ensure people of all genders can be equally safe and productive, and produce opportunities for people to meet and enjoy recreational activities. A city navigable especially, if not only, by cars cannot support either outcome.

However, there’s a caveat. The city can’t simply build roads in a ‘business as usual’ scenario and then link up loose ends with walkways or cycling tracks – or even just keep building, period. A study published in 2018 found that more roads further fragment the living spaces of urban fauna, so animals need to move around more to find the resources they need.

Harini Nagendra, a professor of sustainability at the Azim Premji University, Bengaluru, called this “an excellent example of hard tradeoffs” and speculated that there might not be an easy solution.

“If we connected roads in the manner this study suggests, we will impact rare species and those that like to stay away from humans and traffic” but then also “improve overall animal and bird health, assuming traffic moves more smoothly and pollution levels go down.”

Additionally, cities’ dark roads and buildings trap heat to cause the urban heat-island effect, which will only get worse if the cities build more roads and more buildings next to those roads. “This is the bit this study does not speak of – but we all know that in the political economy of the real world, this will happen,” Nagendra said. “When it happens, the heat-island effect will ensue, changing the microclimate in parts of the suburbs and in areas formerly protected from these effects, leaving all species worse off.”

If anything, “public transport has to be the way to go to reduce emissions, not building more roads,” she concluded.