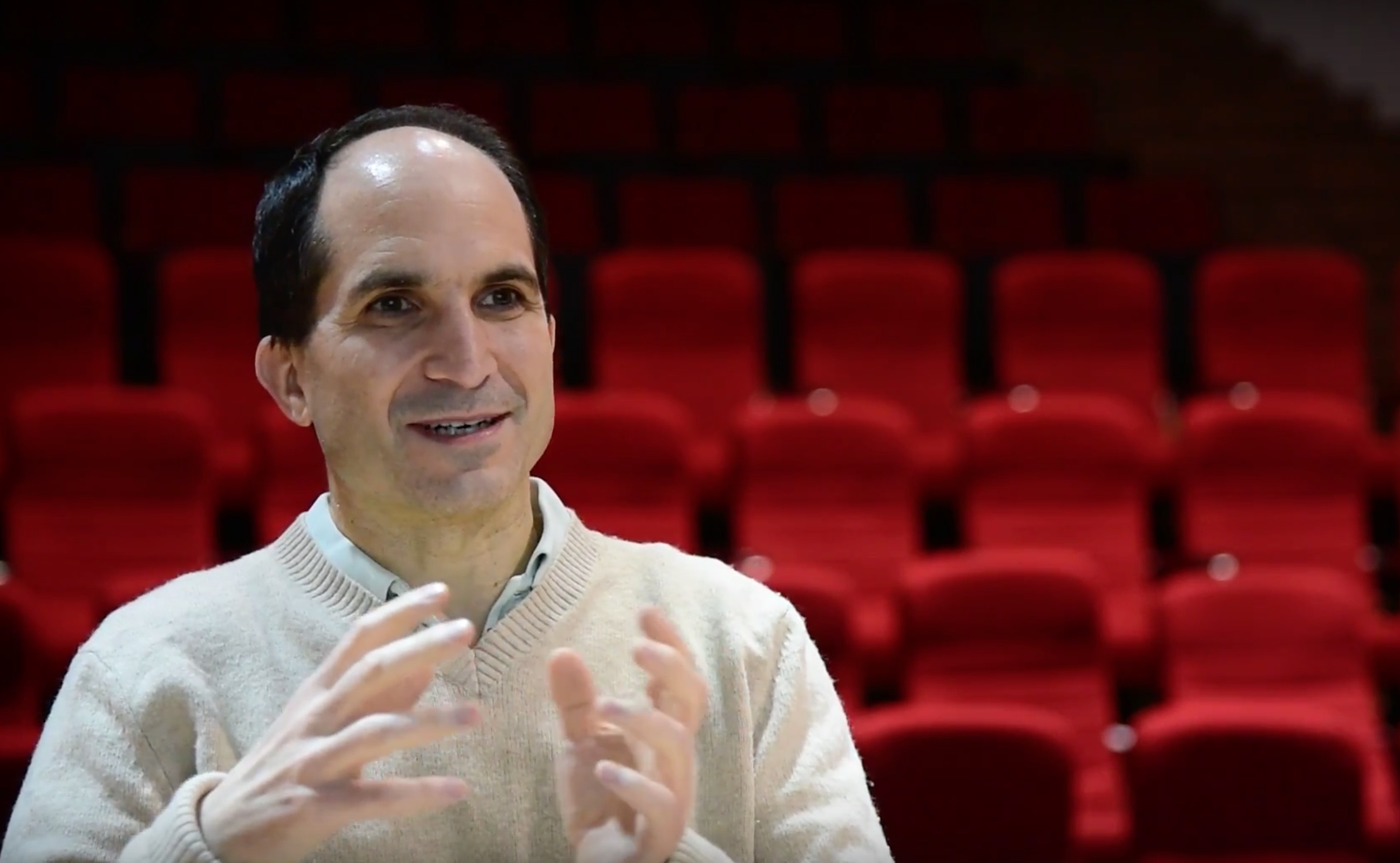 Juan Maldacena is a theoretical physicist at the Institute for Advanced Study, Princeton, and one of the most highly regarded string theorists of our time. Of the many discoveries attributed to him, perhaps the most famous is the AdS/CFT correspondence. It is a mathematical toolkit that has spawned investigations into an array of interesting problems in physics, such as bulk reconstruction (where physicists construct spacetime using information available on its boundaries – somewhat like judging how a fruit is on the inside using what you see on the outside) and holographic models of condensed matter systems. Apart from this, Maldacena has also worked to provide a resolution of the black hole information paradox. He was recently at the International Centre for Theoretical Sciences, Bengaluru, where Nithyanand Rao caught up with him for a chat on behalf of The Wire.

The video and text are both presented in full. The video was transcribed and laid out by Shreya Gautam. The text has been lightly edited for clarity and style. The editor’s notes and insertions are in square brackets.

To begin with, can you give us a sense of what it is like to be a graduate student in physics in the 1990s. What are the questions that interested you at the time?

By the way what is interesting is that many of us in the class were interested in this area, and there was some excitement that a super-collider was going to be built [the Superconducting Supercollider]. But then it was cancelled, so that was disappointing at that time… Yeah, there were interesting questions, some anxiety about whether we would get jobs after, you know, things like that. I think that’s a constant for most graduate students who start out but in the end it worked pretty well for us.

So you were interested in string theory even before you arrived at the US?

Yeah, yeah, I was a bit interested, when I got to the US I looked around at what the things are to do but I decided to continue in this direction.

I think it was well received. I think many people had the feeling, “Oh, you know, how could I have missed it,” and they realised that it’s probably true and then they started working on it. They found more evidence for the relationship and found other applications, so… I mean, there were some people who were trying to probe it and say, “You know maybe it’s not true for this or for that,” but then eventually once various subtractions were overcome, you gain, and people gained more confidence in it.

Having been one of the most active areas of research in the area of physics in the last 20 years or so, would you say there are still aspects of AdS/CFT correspondence that are still not quite fully understood?

Yeah, I think the basic translation between the boundary– So the AdS/CFT correspondence relates a gravitational system that lives in the interior of some spacetime with some particles or some quantum interacting system that lives on the boundary, and the basic translation between the two variables is not understood. I mean, some aspects are understood and you can compare some calculations, but the general translational formula between the two is not clearly understood. This becomes even more confusing when you have black holes and you want to describe the interior of the black hole [from the exterior], and then there are even bigger confusions.

So you just mentioned black holes, one of the things that you have been working on in recent years is resolving the so-called firewall paradox and your work with Leonard Susskind on what’s called ER=EP. If you could briefly tell us what the paradox is and how you and Susskind propose to resolve it.

This paradox is a form of the information paradox. It arises when you think that you have the complete description of the black hole as seen from the outside, that is unitarity respects the principles of quantum mechanics.

[Editor’s note: A switch, for example, can have one of two states at a time: ‘on’ or ‘off’. In quantum mechanics, however, the switch will be allowed to have a linear combination of the two possibilities: some amount of ‘on’ together with some amount of ‘off’. Let’s call these amounts ‘a’ and ‘b’; a and b are complex numbers. According to the Born rule, |a|2 + |b|2 must always equal 1, where |…| is the modulus operator. The requirement of unitarity is that, even as the system evolves in time, |a|2 + |b|2 will always equal 1.]

[Editor’s note: In the 1970s, Stephen Hawking found that the amount of heat a black hole can carry at a given temperature – called its entropy – is directly proportional to its outer surface area. The surface is called its horizon. He also found that a black hole emits this heat out of its horizon in the form of radiation, since called Hawking radiation.]

In quantum physics, there is a principle called the monogamy of entanglement, where you cannot entangle something with two different things, whereas [our calculations assert] that you could. So that’s the paradox.

You think you cannot describe the interior, that the interior perhaps cannot be smooth. So Susskind and I pointed out the fact that when you have two entangled systems, they could be connected through some kind of wormhole. And if that were the case, then you entangle the black hole with some other system [in the universe] and they could be connected with some kind of wormhole. Then the interior of the black hole would be in the future of the system that the black hole is entangled with. Now, the principle of the monogamy of entanglement does not hold when two systems are causally connected [i.e. one system controlling the behaviour of another across spacetime, through the wormhole].

So when you have something here and something in the future, then those two things could [together] be entangled with something else – so that’s not the problem. But this is not a complete resolution of the paradox because it doesn’t say how the black hole’s interior is constructed.

Yeah, you could think this might apply but we don’t know how it applies and exactly what the framework is. One possibility is that, since we live in this expanding universe, there is this theory that in the far future describes everything but it is a not very practical theory for us because we are not living in the far future.

You mentioned the name of Hawking radiation. It has often been said that string theory can explain Bekenstein-Hawking formula for the entropy, and that this constitutes a major success of string theory. Could you explain how this came about and what it is?

Yeah, so Hawking radiation shows that black holes have a temperature, and [we know that] systems that have a temperature have an associated entropy. And so when you calculate the entropy [of a black hole], you find that it is the area of the black hole’s horizon. The goal is to explain this microscopically.

The first calculation was done by Andrew Strominger and Cumrun Vafa. What they did was to consider a special class of black holes, called extremal black holes. In these black holes, you can lower the Hawking temperature almost to zero. These black holes [have] certain symmetries, called supersymmetries. You can change parameters in this theory and transform the black hole into another object called a d-brane, which is something simpler to understand, whose number of states you can count explicitly. So that was the first strategy for the first calculation. And it gave Strominger and Vafa an answer that coincided with the area [of the horizon].

Many areas of research, especially topics that are ‘hot’, go through certain fashions – certain topics become more interesting than others, and people pursue them. Do you think it’s a cause of concern in string theory when people follow fashionable topics and not focus on apparently unfashionable ones?

Well, yeah, there is a certain advantage to fashions, in the sense that they focus the attention of the people and you can all work together, and talk to each other, and not work in isolation. There is also disadvantage in the sense that sometimes it’s good when some groups of people invest in a certain research action for a long time and get some really non-trivial results. So I think, in a healthy field, it is important to have a balance… Ideally you would like people to follow different research avenues and talk to each other, find common aspects and learn more.

String theory has led to insights in many allied fields, including mathematics and condensed matter physics. Do you think in the near future, there will be other areas of research where string theory could throw some light?

Let me add something to the previous question first. I think the extent to which fashions are followed today is less than when I was a student. For example, because the community was smaller then and it was more possible that everyone did the same thing. Now, I think string theory is very wide and there are many different aspects and they are all being followed.

Now going back to your second question – well, it’s hard to think what new thing it could be used for. In fact, in the past, when it was initially applied to condensed matter, we thought it was a big stretch. But then it was a fruitful application, and so I don’t know. I think in mathematics, string theory hasn’t been applied too much, and there might be some interesting applications.

But in some ways, string theory is not formulated in a way that leads to very sharp mathematical statements or the kinds of statements that mathematicians are usually interested in. Maybe in the future, someone will find the right perspective and will be able to use it for mathematics.

But in more immediate terms, you don’t see string theory being applied to any particular problems?

Well, I think holography has many things in common with artificial intelligence, for example. I think the idea, for example, of having a complex system and the immersions of a bulk that summarises the correlations and statistical properties of the system, and the idea of entanglement built in spacetime and describing space time using tensor networks – they all have many features in common with the idea of taking some complex patterns and trying to describe them using neural networks. I think there is some vague similarity between these two things. At least in the name, they both have ‘networks’!

But I think it goes beyond that, I think there is probably something in common… I mean the details are quite different, so I am not saying it’s obvious. It just might be an area where one might see some interesting developments in the future.

So the final question from my side. Physicists have often been known to say that spacetime is doomed. What does that mean?

You have a quantum system on the one hand, and spacetime seems to be like an emergent property. It’s not fundamental but seems to emerge from correlations present in the spacetime. Spacetime is like a representation of a complex state.

From this point of view, the quantum system is more fundamental, but I am not sure if this is the right interpretation.

I would say maybe there will be developments in the future where spacetime will also play an important role. For example, in this area of ER=EPR, spacetime is displaying some features that are harder to see using quantum mechanics. You get a very interesting picture for quantum teleportation using wormholes – which is sort of a little more interesting than the one you get in abstract quantum mechanics.

Edited by Vasudevan Mukunth, with thanks to Madhusudhan Raman and Anupam Ghosh and Shantaraj, ICTS.