What're the Possibilities for Life Around the Universe's Most Common Stars?

When all the Sun-like stars have died in few tens of billion years from now, red dwarfs will be the only remaining stars in the galaxy. And exoplanets orbiting them might be the only options for life to take root on. 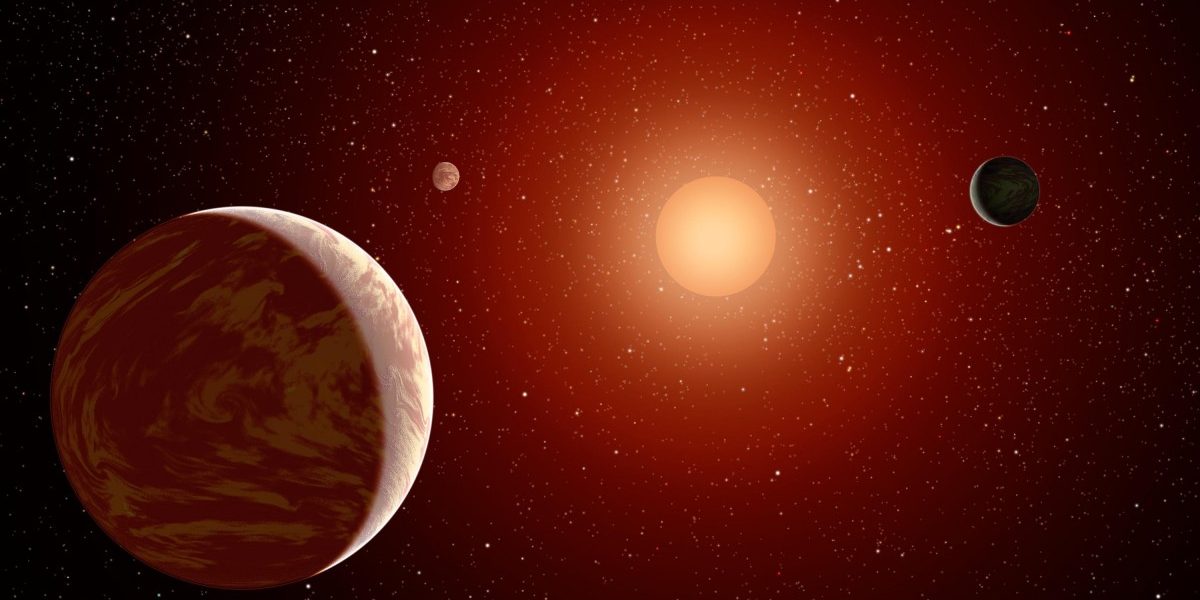 Our search for exoplanets has exploded within the last decade, a period in which we have found them in the thousands. While the initial discoveries were mostly of Jupiter-like giant planets, the more recent ones have unraveled several Earth-like worlds as well.

Earth-like only means that the planet is terrestrial (i.e. rocky) in nature and has enough mass to hold on to an atmosphere. By that definition, Venus and Mars are also Earth-like. But when we do speak of Earth-like worlds, we are more interested whether life (as we know it) can exist on them.

The stars that these exoplanets orbit play an important role in determining habitability – and red dwarf stars among them have seemed particularly promising. Red dwarf stars are the most common type of stars in the galaxy, making up 75% of the stellar population. They are expected to live for more than a trillion years, thousands of times longer than stars like our Sun.

As a result of their ubiquity and longevity, red dwarf stars are of great interest to planetary scientists, who have since been asking: What are the odds that there are planets orbiting red dwarf stars? How many of them are habitable? If so, can they sustain life for longer cosmological periods, like Earth has? And what are the chances that intelligent life exists on such planets?

In 2014, researchers using the High Accuracy Radial velocity Planet Searcher (HARPS) and the Ultraviolet and Visual Echelle Spectrograph (UVES) instruments in Chile estimated that there should be at least one planet orbiting every red dwarf. Shortly after, the exoplanet Proxima b was discovered orbiting Proxima Centauri, the star closest to our Sun. Proxima b is a potentially habitable Earth-like planet, and Proxima Centauri is a red dwarf, located only 4.3 lightyears away.

In 2017, astronomers discovered seven Earth-like planets around the star TRAPPIST-1, about 40 lightyears away. Three of these planets are in the star’s habitable zone. The same year, HARPS discovered another potentially habitable planet, Ross 128b, around the star Ross 128, 11 lightyears away and not dissimilar to Proxima b (from what we know so far). This artist’s conception shows what the TRAPPIST-1 planetary system may look like, based on available data about their diameters, masses and distances from the host star. Caption: Nature; credit: NASA/JPL-Caltech

It seemed like the HARPS/UVES estimate was coming true. But there was a catch: the stars themselves.

Red dwarf stars are smaller, cooler and emit much less energy than Sun-like stars. So if a planet had to be in its red dwarf host-star’s habitable zone and have a surface temperature suitable for life, it would need to be much closer than Earth is from the Sun. As such, all the habitable-zone exoplanets mentioned above are too close to their stars and such proximity has critical implications. Comparison of the orbit of Proxima b around Proxima Centauri, a red dwarf star to that of Mercury around our Sun. Credit: ESO/M. Kornmesser/G. Coleman

First, it means that these planets are likely tidally locked: one side of the planet always faces its star and the other side is in constant darkness. The star-facing side could get hot enough to boil water – while the ‘dark side’ could get cold enough to freeze it. The only hope for life on such planets would then be the twilight zone – along the line dividing day and night, where the temperature could be moderate. However, large temperature differences between one side of the planet and the other could give rise to strong winds, with potentially massive storms blowing from warmer to cooler regions. Planets close to red dwarf stars will be tidally locked the same way the Moon is with Earth, having only one side of it exposed to the planet. Credit: Smurrayinchester/Wikimedia Commons, CC BY-SA 4.0

And these might just be the least of these (hypothetical) aliens’ problems. Between 2003 and 2012, NASA’s GALEX mission observed multiple red dwarf stars in the ultraviolet part of the electromagnetic spectrum. It found that these stars ceaselessly produce flares like our Sun, some of them much stronger. They are accompanied by the emission of large amounts of high-energy ultraviolet and X-ray radiation. Such flaring could strip a planet’s atmosphere away in fewer than a billion years. This is what scientists think happened to Mars as well (where the rate of atmospheric loss was a bit relaxed).

Because the exoplanet has to be closer to its red dwarf star to be in its  habitable zone, the atmosphere loss is accelerated. It has been estimated that these planets could lose their hydrogen and oxygen (and thus water) in about 10-100 million years. Additionally, ultraviolet radiation can penetrate a planet’s atmosphere and damage any existing, terranean life-forms.

Red dwarf stars are also known to produce mega-flares thousands of times more powerful than their solar counterparts. They are common when a red dwarf star is just born. The adverse surface conditions as a result of the radiation from these mega-flares might even prevent life from arising in the first place. 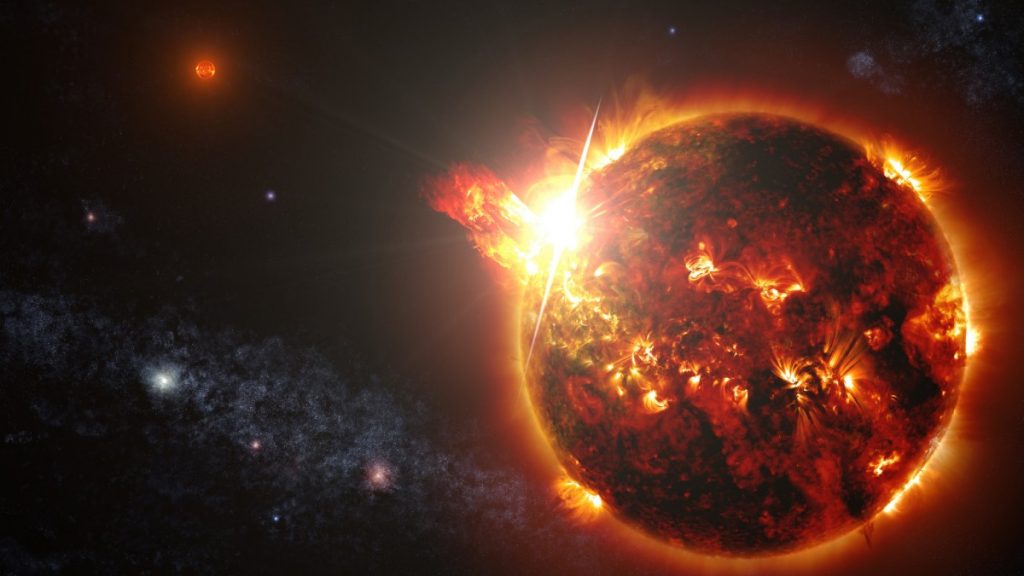 All these factors considered together suggest that the planets orbiting red dwarf stars are likely to be water-poor hellscapes. But as it turns out, planetary simulations have suggested that ocean worlds are possible as well. On these worlds, water makes up over 1% of the planet’s mass (compared to the ~0.01% on Earth). Then again, having too much water can lead to an unstable climate. Researchers at the Tokyo Institute of Technology suggested in 2015 that planets around red dwarfs are less likely to have an Earth-like water content and more likely to be ocean/arid worlds.

To put it in a tweet’s length: bad news any which way you look.

Fortunately, there have been some silver linings. For example, the Hubble space telescope has been able to find that the outer, more massive planets in the TRAPPIST-1 system may have retained their water instead of losing it all.

In 2013, researchers at the University of Chicago and Northwestern University suggested that planets tidally locked around red dwarf stars could have substantial cloud cover on their star-facing sides. Clouds reflect starlight and can keep planets cooler while also caging the planets’ infrared radiation to keep things warm enough to support life. So if the planet has a substantial atmosphere, the heat can be distributed more evenly among both hemispheres. 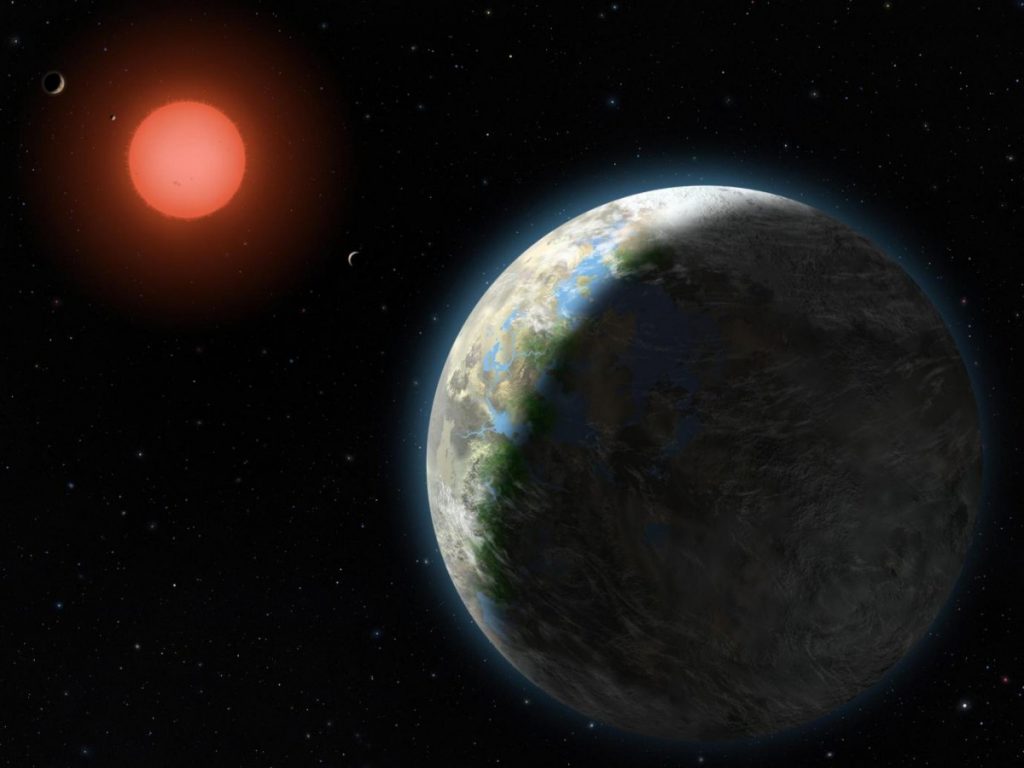 An artist’s conception of an exoplanet with clouds and surface water, orbiting a red dwarf star. Credit: University of Chicago

We have a way to check this. The James Webb Space Telescope (JWST), due to be launched in 2021, will be able to characterise exoplanetary atmospheres. If an exoplanet has clouds, the temperature of the star-facing side would be lower compared to that of a cloudless planet, and vice versa. The recently launched Transiting Exoplanet Survey Satellite is also expected to find plenty of planets in the habitable zones of red dwarf stars. The JWST will then be able to study them further.

The long lifespans of red dwarf stars also mean that life on planets around them will have more time to develop. For example, the TRAPPIST-1 system is older than the Solar System. The long-term evolution of planets around red dwarfs also plays a role, including in the form of changing geological conditions and orbital dynamics.

So, whether (potentially) habitable planets around red dwarf stars are truly habitable remains an open question, one that will take a long time to be settled scientifically. And whichever way it is answered, there are bound to be profound implications. When all the Sun-like stars have died in few tens of billion years from now, red dwarfs will be the only remaining stars in the galaxy. And exoplanets orbiting them might be the only options for life to take root on.

The stage is also set for the much-awaited launch of the JWST, and for its follow-up observations of multiple exoplanets, helping determine their habitability and looking for biomarkers in their atmospheres. One can only hope that it is put up in space soon.