One Year On, the PM's Research Fellowship Is off to a Sputtering Start

In its first year, the PMRF honoured only 135 students out of a promised 1,000, and with a remarkable bias (96.3%) towards applications that proposed applied science research. 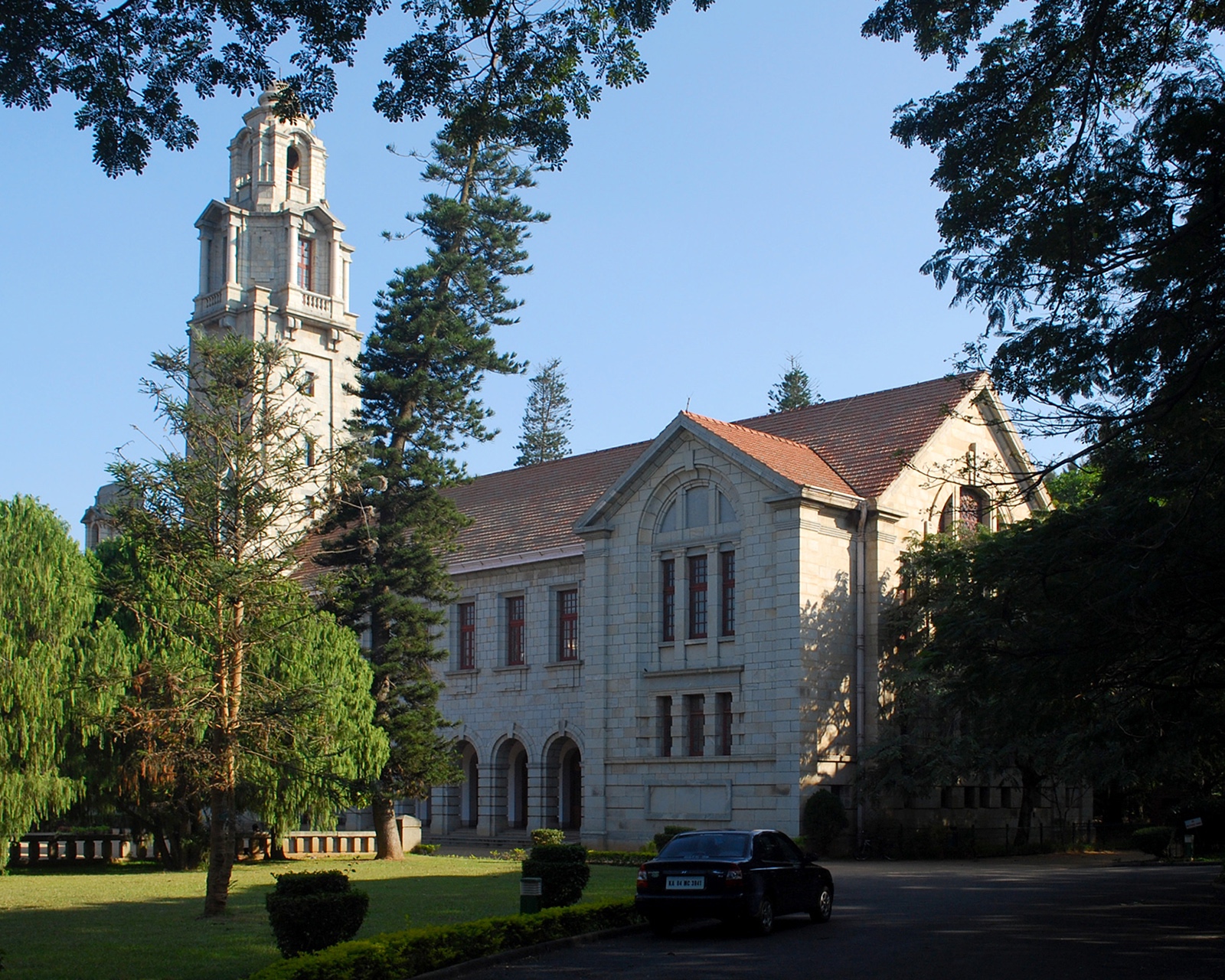 The faculty hall at the Indian Institute of Science, Bengaluru. Credit: mapbox/Flickr, CC BY 2.0 To boost the prospects of PhD students, the Government of India has instituted a large investment in the form of the Prime Minister’s Research Fellowship (PMRF) for 1,000 students from elite government-run institutes in the country. However, only 135 candidates were chosen for the honour this year. We are two PhD students and alumni of these “elite” institutes, and we analyse what these awards mean for the recipients, the students and the science they leave out of consideration.

Quoting from the PMRF webpage, the “scheme is aimed at attracting the talent pool of the country to doctoral programs of IITs and the Indian Institute of Science (IISc) for carrying out research in cutting edge science and technology domains, with focus on national priorities”.

The scholarship is a generous amount starting at Rs 70,000 per month for the first two years (with additional research and travel grants) awarded to 1,000 students pursuing their undergraduate studies in IIEST, IISc, IITs, NITs, IISERs and centrally funded IIITs, which will provide them admission to a full time PhD programme in the IITs or the IISc. Three years ago, while still completing our undergraduate education in one of these institutions and starry-eyed about academia, this would have been an exciting avenue. Today, deep into our PhDs, we are sceptical – and it’s not just sour grapes.

In general terms, the PMRF is certainly welcome news for science funding in India. While the overall funding for science in the country has been increasing year after year, several reports state that the proportion of the GDP allocated to the funding has been stagnant at ~0.7-0.8%. This is not compensation enough for the growing needs of the science sector imposed by an increasing number of students and researchers. Against this backdrop, this grant is welcome news indeed.

Fellowships like these encourage students to take up a science career, which otherwise pays lesser than jobs that demand comparable skills. Science comes at a cost, and securing a good grant such as the PMRF means that PhD students can support families rather than being financial liabilities. This also bypasses administrative costs and red tape. It ensures that the funds can actually be utilised by the students that they were intended for, rather than being used up by the administration for very indirect benefits and non-essential infrastructure development.

Many were the semesters when we came back poor after summer research only to discover that new TV screens had sprung in various corners of the institute and doors were opening automatically. Governmental grant agencies in the past have been notoriously late in disbursing stipends. Our first and second-hand experiences with INSPIRE and CSIR grants are telling of this fact. A direct grant to the student would also help combat the prevalent problem of students not receiving the money at the stipulated time.

Such a grant can also facilitate holistic professional development of an early-career scientist. A scholarship awarded based on a research proposal provides good practice in terms of writing grant proposals in the future, in an independent academic capacity. Many of us don’t have the opportunity to develop this vital skill during our PhDs. Considering the fellowship amount, more than double that of the Junior Research Fellowship awarded by the CSIR, the PMRFs also carry the promise of big and bold research! The enormous budget for travel and conferences will also guarantee a lot of exposure to research across the world, which students in India have limited access to compared to their peers who pursue PhDs abroad.

Despite its obvious benefits, there are some serious issues that we need to consider.

First off, only 135 fellowships were declared this year – about 10% of the promised total. This reduces the winning chance of each applicant by 90%, and these are students who have spent time and effort identifying a question, doing a literature review and researching methods. While even seasoned researchers are stressed by grant applications, this is simply unfair to a young scientist at the threshold of her career.

Besides, how the money for the undeclared 865 fellowships will be utilised – and whether it will still be used to fund scientific research – is an open question. Harsh Vardhan, the Union minister for science and technology, has already been known to talk about several grants instituted by the government but which recipient scientists say are yet to reach them. It would be a shame if representatives of the government use this as an excuse to further such claims.

The low selection rate of 135 out of 1,000 also begs the question of why so much selectivity for an already restrictive fellowship. Only undergraduates being from any of the IITs, IIEST, IISc, NITs, IISERs and centrally funded IIITs are eligible to apply to this grant. By restricting the eligibility to only the “elite” government-funded undergraduate, this fund is adding to layers of privilege that currently shape Indian academia.

The 1,800 students who applied from this pool of candidates were those who had already cleared many levels of implicit selection. An analysis of the student composition of IITs shows that not all economic and social backgrounds have equal representation in these elite institutions. There is a whole chain of filters based on economic and caste status, quality of schooling, the ability to afford the coaching required to clear the various entrance exams, and the ability to pay the prohibitively expensive fees that several of these institutes charge – along with hostel fees, mess fees and peer-pressured booze and pizza fees, which introduce inequality in the opportunity available to Indian students to avail a world-class education. It is only a half-joke that the IISc is often called the “Iyer-Iyengar Institute of Science”.

The fellowship has apparently been designed to pile privilege on privilege rather than provide a fair chance to students outside this elite circle to step in. There seems to be an implicit but unfair assumption that no one outside of this clique can possibly match up to their levels of scientific rigour, insight or dedication. In contrast, a comparable programme, the National Science Foundation’s (NSF’s) GRFP, a landmark grant by the US government providing direct funding to graduate students, accepts applications from students across all universities in the country. Students funded by the NSF have later become world leaders in their respective fields, proving that there is value in broadening the scope of this grant.

There is also the issue of the institutions where the awardees are allowed to do research, which has been discussed earlier. It is odd that while the PMRF is advertised as a research grant, the selected students are admitted into a PhD position only in one of the 23 IITs or in the IISc, narrowing down the scope of choice even further. The research output from various IISERs, and institutes like NCBS, NIO, IITM, IACS, RRI, NIV and PRL is as much as the IITs if not more, and their combined scope is broader.

Basic research being their mandate, these institutes can be expected to have better infrastructure and academic communities than the IITs, whose objectives are primarily technical. The nodal institutes reflect a huge bias towards applied science. Even a quick glance through the fellowships awarded this year makes this very clear: of the 135 declared fellowships, only five (3.7% of awarded grants) have been awarded for basic science research – two in biology and three in physics.

This is embedded in the larger question of what our “national priorities” are. This is a puzzle for the applicants, since nowhere in the application information is this explicitly defined. This makes the application a wild gamble.

Agriculture technology, naval engineering, petroleum engineering, pharmaceutical drug research and biomedical engineering are all fields worthy of being national priorities. But this excludes students with interests in asking basic, relevant questions in fields like biodiversity conservation, natural resources management, protein and enzyme biology, public health, clean energy or thermoelectricity. Amidst water wars, unexpected viral outbreaks and the sixth extinction, are these fields not equally important? Applied research might offer solutions to immediate problems but research in basic sciences sets up a foundation to solve problems that we are unable to foresee today.

The 2015 UNESCO Science Report commented that the trend of prioritising commercial over basic research is a short-sighted approach and recommended a focus on “public good”. The Indian science community is now larger and more diverse than ever before. The time is ripe to tap into this talent pool with a broad and inclusive grant scheme to produce science for the people.

Kshiti Mishra is a PhD student in physics at Radboud Universiteit, Nijmegen (the Netherlands). Krishna Anujan is a PhD student at Columbia University studying tropical forest ecology. She tweets at @KrishnaAnujan.