The Particle Accelerator That Could Fit in Your Pocket

Scientists at Stanford University are working on a tiny particle accelerator with potential applications in materials engineering, sterilisation and water treatment. 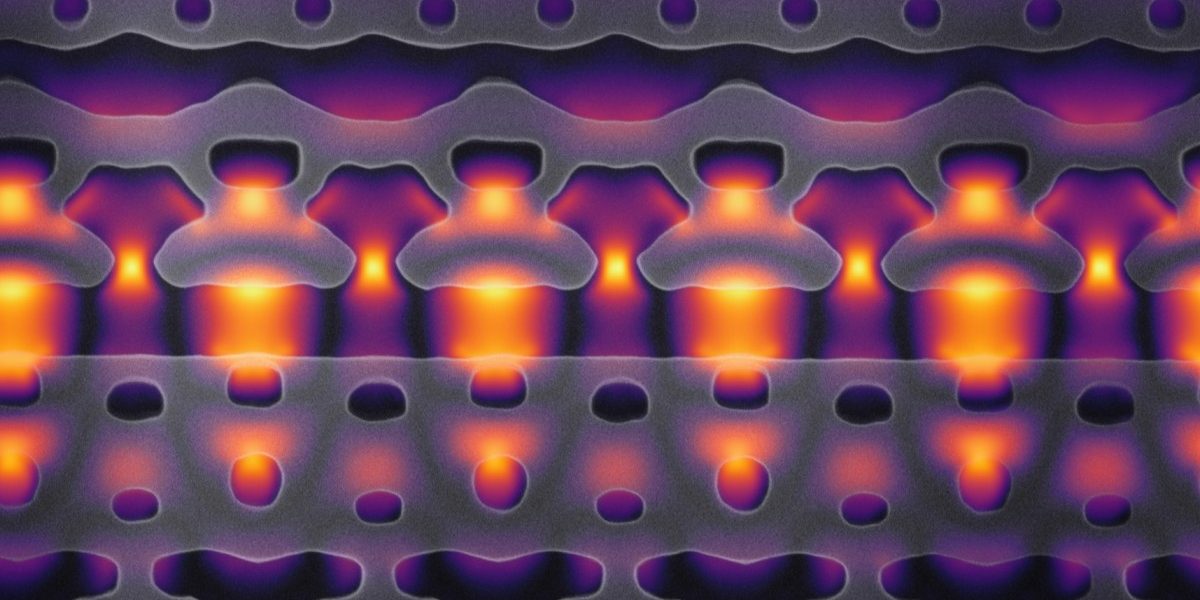 One segment of new tabletop accelerator. The grey structures are nanometer-sized features carved in to silicon that focus bursts of laser light (yellow and purple) on a stream of electrons. As the electrons move from left to right, the light focused in the channel is carefully synchronised to move them forward faster and faster. Image: Neil Sapra

The world’s largest machine is called the Large Hadron Collider (LHC). It’s in the shape of a ring with a circumference of 26 km, and cost $3.4 billion (Rs 24,262 crore) and 12 years to build. Using millions of electrical and mechanical components, it accelerates protons to extreme energies and smashes them against each other.

For the last few years, a team of researchers at Stanford University, led by Robert L. Byer, a professor in the department of applied physics, has been building a machine that also accelerates subatomic particles – but it’s so big, it could fit entirely on your fingertip.

This microscopic device belongs to a class of machines called tabletop accelerators that scientists are interested in for lower energy applications.

The LHC was designed to aid particle physics research, which typically requires particles to be accelerated to more than 1 GeV; the LHC itself can accelerate protons to 8,000 GeV. (A proton at rest has 938 MeV of energy, and an electron is 1,836-times lighter.) On the other hand, medical imaging devices typically use particles, especially electrons, of a lot less than 1 GeV. So the cheaper and smaller tabletop accelerators offer the tantalising prospect of more accessible and affordable diagnostics, plus other industrial applications.

A smaller accelerator could also democratise high-energy physics research: more labs around the world, especially in middle and lower income countries, can then use these devices to conduct their studies instead of having to use data produced by richer countries according to the latter’s own research goals.

“We want to miniaturise accelerator technology in a way that makes it a more accessible research tool,” Jelena Vuckovic, an electrical engineer at Stanford whose lab led the work on a new project, said in a statement.

Most accelerators function on the same principle: generate lots of electromagnetic energy, then transfer it to charged particles using an intense electric field.

The Stanford group accomplishes this with a narrow channel, about 200-times less wide than a single strand of hair, etched in a slice of glass. A rapidly pulsing infrared laser is shined over the channel, its wavelength precisely twice as long as the channel’s height, and then electrons are shot through. The whole setup is maintained in a vacuum.

As the waves of the radiation pass over the channel, they alternatively push forward and slow down the electrons. Byer’s team etched tiny ridges – little mountains and valleys – on the base of the channel such that when electrons passed over a ‘mountain’, they would be pushed forward more than they would be slowed down when they passed through a ‘valley’.

This way, they reported achieving an acceleration gradient of 300 MV/m: for every meter of this arrangement an electron would traverse, it would gain 300 MeV of energy – a sizeable improvement over that of the European XFEL, the world’s longest linear accelerator (2.1 km). Byer et al also claimed in their paper that the apparatus consumed only 10 mW of power.

However, their device couldn’t sustain its impressive gradient over more than a few centimetres and only worked with pre-accelerated electrons.

In a new paper published on January 3, the same group, led by graduate student Neil Sapra, has reported some changes to their device to make it more robust and scalable, with a view to achieving higher energies in future iterations for important medical and industrial applications.

The principal difference lies with the use of a free-space laser in the 2013 design, where radiation emerges from a source and passes through free space before striking the electrons, so to speak. The new design uses “on-chip coupling through a grating coupler to accomplish a waveguide-integrated dielectric laser accelerator,” Sapra told The Wire.

That is, the laser light is first inserted into a slab waveguide, which is a component consisting of one material sandwiched between two others such that light passed into the middle layer is trapped there by total internal reflection. The waveguide is then coupled with the glass channel, improving the coordination between the laser light and force exerted on the electrons. The better this coupling is, the lesser power will have to be expended for acceleration.

The team also used a new technique, dubbed ‘inverse design’, to fashion the device. Inverse design is a software framework that allows researchers to optimise the photonic circuit together with the physical parameters of the apparatus to improve different aspects of the device, such as acceleration efficiency, with a lower computing cost.

But the device isn’t exactly ready to ship. Its pros include the low laser power required (around 3 mW), the robust architecture that allows it to be integrated more easily into larger machines and, of course, the small size – a few dozen micrometers wide, somewhat larger if the laser source and focusing equipment are included. However, the device still needs pre-accelerated electrons to work – in this case of energy 83.4 keV – and the pre-accelerators aren’t very small.

Second, the new device energised electrons by 0.9 keV over 30 micrometers, which implies an acceleration gradient of 30.5 MV/m. This is 10-times lower than what the previous design achieved.

One way to increase the amount of energisation is to line up multiple small accelerators to make a big one. Physicists from California tried this in 2016 using a laser plasma accelerator, which is another type of tabletop accelerator. They found that to push electrons to 1 GeV, the assembled device plus modifications would have to be a few hundred meters long.

These dimensions are still competitive if the goal is physics research. However, hundreds of metres is infeasible for medical imaging and other non-laboratory applications.

Also read: Particle Accelerators May Soon Be Within Reach of the Developing World

Sapra indicated a similar direction for his dielectric laser accelerator, saying that the current study demonstrated acceleration over a single stage, and that in future, he plans to augment this design using a waveguide that will split and “branch off into multiple stages, similar to what I showed on a single-stage level in this work”.

An accelerator composed of a thousand such stages is expected to be about an inch wide, effectively rendered as an ‘accelerator-on-a-chip’. Sapra expects the chip could potentially accelerate electrons up to 1 MeV – perfect for medical and industrial applications, including (according to one report) materials processing, sterilisation, cargo screening, biofuels production, and water and flue-gas treatment.