“People have left Chennai because of war, they’ve left because there were few jobs but they’ve never left because of water scarcity,” said a historian. But in the archives of Chennai city, that could well be the next chapter. 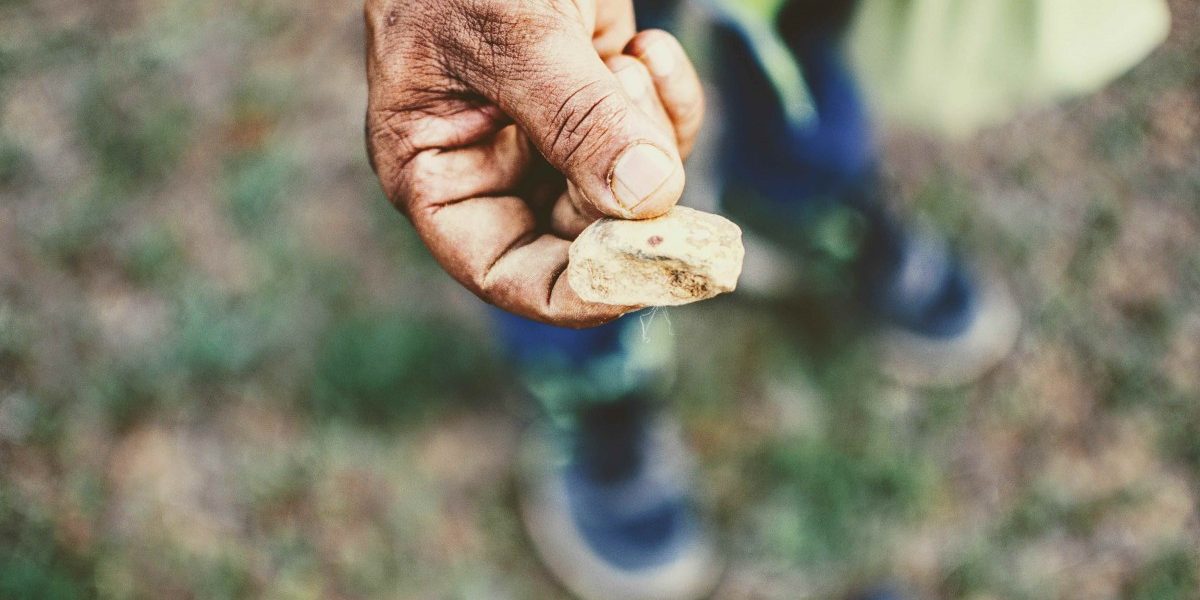 “Look at that,” Hema Achyuthan cried out loud.

She was pointing to an ivory-tinted flake. It was a prehistoric, handcrafted stone tool wedged like a white chocolate chip on a red mud-cake.

Achyuthan, a short-haired, medium-built woman with an easy manner and brisk strides, was trodding along a shrubland on the northern bank of Chembarambakkam lake, a large potable water reservoir outside Chennai.

The 61-year-old geologist hunched to run her fingers over the contours of her discovery before unplugging it from the soil with her rock axe.

Her praise was operatic. “Beautiful, beautiful!”

But in the ballad of Chembarambakkam lake, this chorus could well be a thing of the past. The story that commenced with the percussion of stone-tool-makers now echoes the cacophony of factories around a shallow lake with fluctuating water  levels from climatic changes triggering floods one year and droughts in another. It is set to hit an arid tempo as evident from a layer of sandy deposit on its banks – geological evidence that portends increased water scarcity in this region. 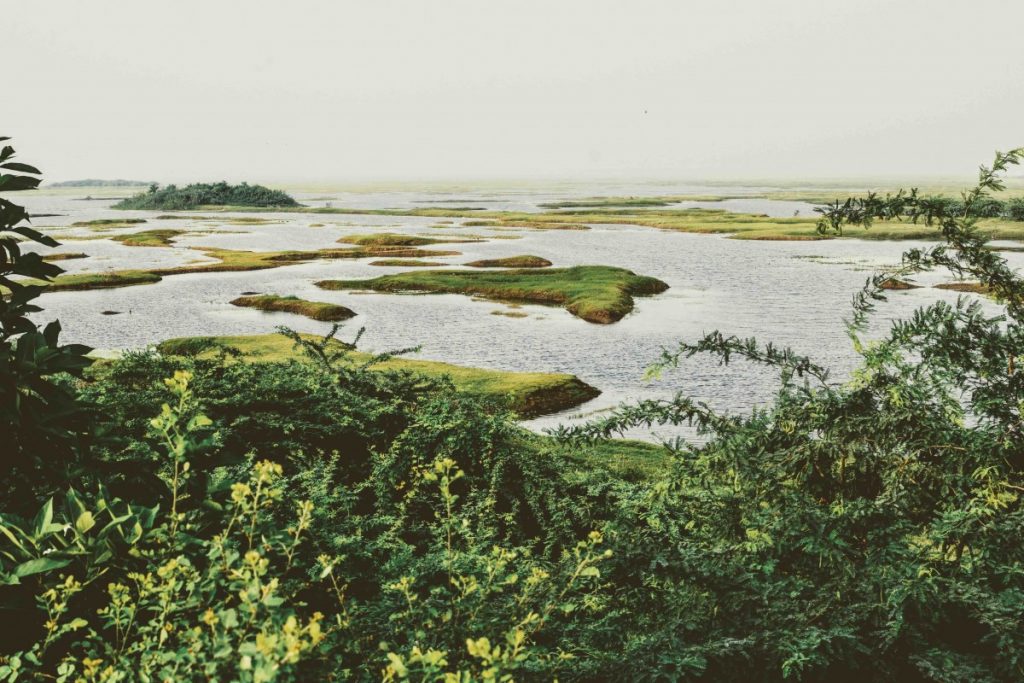 The Chembarambakkam lake wreaked havoc in 2015 when it gushed above its 24-feet level and flooded the city amidst the highest rains of the century. The following year it was an empty cauldron when the city faced a record drought. Credit: Anupama Chandrasekaran

The quartzite flake that Achyuthan cradled in her palm was one of myriad tools littered over mounds, pits and platforms along the banks of Chembarambakkam lake. The expansive site had Martian-red soil. Thorny thickets splashed blotches of green on this terracotta earth.

According to stone-tool evidence found so far, archaeologists believe early humans migrated to India from Africa over a million years ago. It has been suggested that they travelled through parts of West Asia in small bands and moved from India’s north to its south along the subcontinent’s peninsular coast before making a U-turn into the east.

When groups of 15-20 hunter-gatherers settled along the spot that now holds the Chembarambakkam lake, the landscape could have been significantly different. Over thousands of years, rivers slither away and coasts sink into the sea or rocket to a mountain top. When we talk of time in billions of years, it makes correlation to current environments complicated, say archaeologists.

Also read: Chennai May Just Be Masterminding its Next Flooding Disaster

Still, the middle-Stone-Age tools – small, sharp flakes of rock that fit in a pincer grip versus the bulky, palm-held hand axes of the Lower Palaeolithic – found in Chembarambakkam’s lake bed suggests that some sort of water body existed there. Meandering bands of humans usually settle along a thirst-quenching source. Ponds, rivers and streams are magnets for animals and vegetation as well. For troops of ancient humans, it meant that the next meal could have been just a stone’s throw away.

“Man has been here for thousands of years, making tools and taking advantage of the wet, tropical conditions close to this water expanse,” said Achyuthan. The Chembarambakkam lake is surrounded by factories that have devoured farmlands. Credit: Anupama Chandrasekaran

Today, car companies girdle the lake. It is the reason Chennai, a culturally-vibrant city in South India located 30 km east of Chembarambakkam – is also called the ‘automotive capital’ of India.

At 15 sq. km, the waterbody occupies a space that could fit 2,100 football fields. This sprawl is unsurprising as the lake and its watershed supplies water to over eight million people currently living in Chennai.

Studies published about the lake suggest that it was created that more than 400 years ago, during the Pallava rule, when a crescent-shaped wall was built across what may have been a river. For several centuries, narrow canals gushing with water from the Chembarambakkam lake fed thirsty paddy fields.

Today, stone quarries and factories have devoured these farmlands, a smattering of which survive on the lake’s fringes. Automotive companies, car component makers, mobile phone manufacturers and glass producers form the skyline of the region. The spiralling industrialisation, burgeoning population and garbage-gagging of feeder ponds is pushing the lake into troubled waters.

“The lake is currently storing just half the water it did in the 1970s and the rest is going to the sea,” said Venkatesh Ramakrishnan, a Chennai-based historian. “It is hugely silted and if it is deepened to the 1970s depths, it will solve the flood and water problems of Chennai.”

The flood that Ramakrishnan is referring to occurred three years ago, when a record deluge caused Chembarambakkam lake to spill over. More than 400 people were killed.

Environmentalists suggest that the disaster was partly caused by excessive silt deposits shrinking this cauldron to 60% of its capacity. Dumping of garbage and construction rubble, choking smaller satellite water bodies with underground channels, seesawing water in and out of the lake, may have also exacerbated the calamity.

The longer-term concern, however, is just the opposite: water scarcity.

Just a year after the ruinous flood, the city was hit with a record drought. It was the severest in over 140 years and turned the lake from a brimming cup to an empty one.

“It takes a lot of time for a tropical region to turn into a desert but we are facilitating it through human intervention in more ways than one,” said Arun Krishnamurthy, a 32-year-old activist who studies the Chembarambakkam lake and has revived a few of its surrounding water bodies. He added that the vegetation is transforming as well – from a landscape of neem trees, to one cluttered with thorny shrubs of an invasive, arid species. Hints of the lake’s future, and humanity’s long relationship with it, lie in a band of pale soil along its northern fringe.

It is a lightly packed deposit with a fragile, pie-dough-like consistency. Achyuthan, the geologist, scrutinised a chunk and let it crumble between her fingers.

The layer of sediment was sometimes a metre high and was lodged above an outcrop of iron-rich, ice-age period rocks called ferricretes – ‘ferri’ refers to iron oxide and ‘crete’ implies concrete – along the northern bank of Chembarambakkam lake.

Also read: How Official Negligence Turned a Natural Crisis into a Human-Made Catastrophe

According to Achyuthan’s analysis, the wind could be catapulting fine particles of weathered soil and stone from around the lake onto rocks along its banks.

Such airborne sediments are called aeolian deposits, named for Aeolus, the Greek god of wind. The deposit is an indication of slow aridification in South India’s tropical monsoon belt. It is a geological clue suggesting that moisture from the Chembarambakkam lake’s bed is being sucked out, causing the rocks to weather.

“It is clearly evidence of the changing environment,” said Achyuthan. She published this discovery in a 2008 research paper. “Our findings of aeolian deposits over the ferricretes seems to suggest that the climatic conditions are getting drier.” 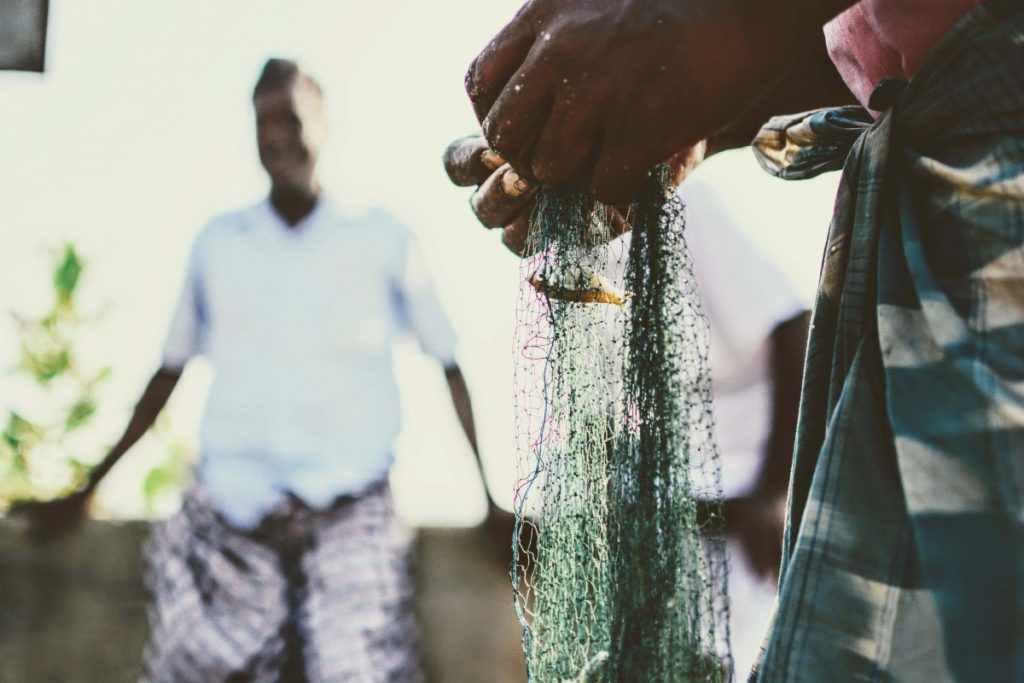 Gajendran is a modern avatar of the lake’s prehistoric hunter-gatherers. The fisherman spidered up the lake’s embankment just after sunrise, dragging fishing nets behind him. It was a four-decade-old ritual that had its roots in the ancient past.

His catch was sparse. He stood watching a fellow fisherman plucking silvery, thumb-sized fish off a blue, hand-cast nylon net.

A few feet away, the Chembarambakkam lake looked like an island stretch – green mounds of the lake bed floating above the shallow water expanse. The nearly empty lake seemed to open thirstily to the sky. Some coots, a hardy water fowl with black plumage, paddled around.

“Back in the days, there was plenty of fish,” said Gajendran, who goes by only one name. He spoke in Tamil. “Now the catch has dwindled. Bird populations have also reduced. What can we do? This used to be a beautiful region surrounded by green paddy fields.”

He rested against a wall of the lake bund, his back to dark plumes that were bellowing from the chimney of a neighbouring factory. The sky above had a smattering of rain clouds.

But in the archives of Chennai city, that could well be the next chapter.

Anupama Chandrasekaran is an independent podcaster and publishes audio documentaries focusing on deep history via www.recordist-in.org.

This essay is from a National Geographic Society and Out of Eden Walk journalism workshop.