It surprises no one that since 1960, barely a dozen of the 56 probes launched to Mars have actually landed on the ruddy surface. 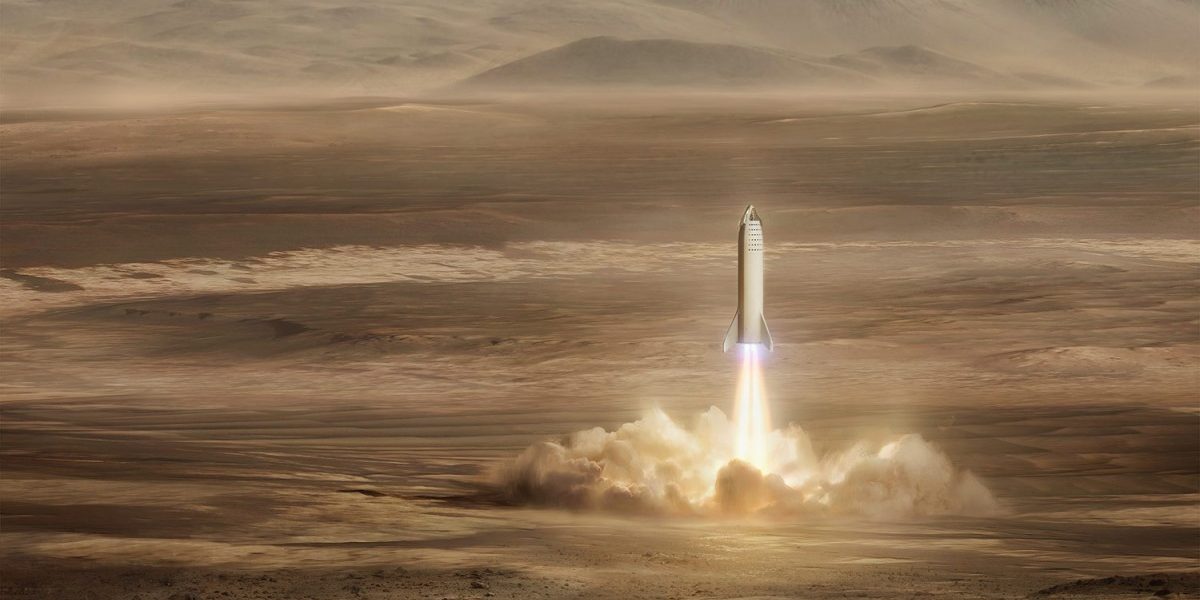 An artist's impression of the Starship descending onto the Martian surface. Credit: SpaceX

Elon Musk, the CEO of aerospace company SpaceX, wants to have his epitaph on Mars. In a television interview last week, Musk spoke of his wish to travel to Mars irrespective of the odds against his surviving the trip or – once there – succumbing to the harsh environs. Musk has been thinking aloud about going to the red planet since March 2013, when he said he would like to “die on Mars, just not on impact.”

Reflecting this, one of SpaceX’s goals is to transport a million colonisers to Mars using a reusable spacecraft it has already christened Starship. It will be equipped with solar arrays, thruster rockets and carbon-fibre fuel tanks.

The idea is for Raptor to first launch Starship into orbit around Earth and return to the launchpad. It is then launched again carrying the refuelling craft, which will dock with the Starship in orbit. After filling up, Starship will begin its Marsward journey.

Musk expects the first flights to begin before the next decade is out. Thereafter, SpaceX will have one mission every 26 months, when Mars is closest to Earth in its orbit.

Also read: Now Playing On Your Timeline, the Cult of Elon Musk

While Musk’s initiative is certainly an idea whose time has come, there is still aways to go before you can book a seat on Starship. Developing a launch system to get off of Earth and set course for Mars is only one part of the colossal engineering challenges that await wannabe Mars colonisers.

Although astronauts have been in space – off and on – for over five decades, except for a few quick trips to the Moon, they’ve never spent much time far from Earth. Deep space is filled with energetic protons from solar flares, gamma rays from newborn black holes and cosmic rays from exploding stars. With no big planet nearby to block or deflect this radiation, those who make the 128.7-million-km, three-year voyage to Mars and back will be tested to their limits.

Notwithstanding some tentative experiments onboard the International Space Station in low-Earth orbit, scientists still don’t know much about the effects of space travel on the human body. On Earth, for example, gravity pulls blood towards the lower body. In the absence of gravity, blood could collect in the torso and precipitate complications like oedema in the face or arms.

Other effects like muscle atrophy, in fact, seem more tolerable than space radiation. Exposure to space radiation, scientists believe, could affect the bloodstream and trigger unpleasant reactions like nausea and diarrhoea. Longer exposures could kill.

If these are not daunting enough, consider the navigation and engineering capabilities required. A successful Mars landing is so difficult that space agencies readily attest to Mars’ reputation for being a graveyard for exploratory spacecraft.

The orbital entry, descent and landing stages of a Mars mission are the most dangerous phase of its voyage from Earth. A major challenge is to decelerate the spacecraft as it drops from orbit on to the surface. The atmospheric pressure in this phase is so low that there is no drag to arrest the craft’s descent.

It is no wonder that since 1960, barely a dozen of the 56 probes launched to Mars have actually landed on the ruddy surface. The others have failed because of reasons ranging from the unexpected – as when a Martian storm destroyed the Polar Lander during touchdown in 1999 – to the bizarre – when mission controllers mixed up metric and imperial data and smashed the Mars Climate Orbiter into the red planet’s atmosphere.

The threats don’t subside even after landing. For example, Japan’s Nozomi had its electronics fried by a solar flare in 2003. The mission had to be abandoned.

Also read: Five Reasons to Forget Mars for Now and Return to the Moon

It is against this backdrop that space agencies and private entities like SpaceX are using bold science to get to know the red planet better, before the first manned missions liftoff. Mars offers a realistic option as a second home for humans. Robotic exploration has indicated the presence of a resource-rich environment, including mineral and metal deposits.

Thanks to these unmanned missions, we may soon have enough knowledge about the planet’s dynamic weather systems and become able to develop mineralogical maps even better than those of Earth. At first glance an arid planet covered in red dirt, Mars is now believed to contain large volumes of water locked up in subsurface deposits. This is an invaluable resource for manned Mars missions.

Once we get there, the possibilities range from using the planet as a second source of fuel, drinking water and oxygen to terraforming its face and prepare it for human settlement. Beyond that, the planet is also an excellent candidate as an interplanetary springboard: a pitstop for human missions going deeper into the Solar System.