Plan S's participants want to set up a global commons of scientific knowledge. But the publishing scheme it proposes presents a distinct set of problems that, if not addressed, could capsize this Titanic reform of scientific publishing.

If Plan S has to work, researcher-funders also have to help reform scientists' and administrators' attitude towards notions like "prestige". Credit: yeaki/Flickr, CC BY 2.0

On February 12, K. VijayRaghavan, the principal scientific advisor to the Government of India, announced that India would join a global consortium of countries attempting to standardise the way their scientists publish their papers, such that the papers are freely available to the public.

The consortium is grounded in a scheme called Plan S. It was originally mooted by Science Europe, a nongovernmental body of “research-funding” and “research-performing” organisations headquartered in Brussels, in September 2018. The burden of achieving Plan S’s goals is borne primarily by the research-funders, including the national government in India’s case, and the journals they will be working with.

At present, there are various ways for a scientist to have her paper published. They can be divided broadly into two groups: open access (OA) and subscription. OA typically is the term used to refer “to the practice of making peer-reviewed scholarly research and literature freely available online to anyone interested in reading it”.

Against this background, Plan S released a now-famous 10-point guideline specifying the researchers’ rights and the funders’ responsibilities, all with the following goal:

After 1 January 2020, scientific publications on the results from research funded by public grants provided by national and European research councils and funding bodies must be published in compliant OA journals or on compliant OA platforms.

In effect, research-funders are required to pay the APCs so that the research they fund can be published in OA journals, and the funders can mandate that studies they enable only be published in such journals. 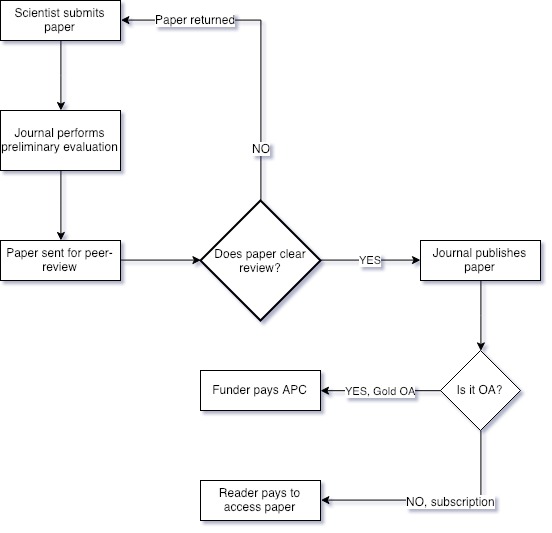 A broad, and oversimplified, overview of the scientific publishing process

With India set to join the Plan S coalition, this means the Government of India, through the Ministry of Finance and the Department of Science and Technology (DST), will pay to have Indian scientists’ papers published in OA journals. In turn, everyone in the world will be able to access publicly funded research from India, and vice versa.

At the outset, Plan S’s participants want to set up a global commons of scientific knowledge. This is admirable because OA publishing removes barriers to knowledge that people working in less-developed and resource-poorer areas might not be able to access – but to which they can contribute or which they can use. However, it’s not all rosy: gold OA, as well as Plan S, come with multiple problems, and if they aren’t addressed, the coalition could fail.

The most immediate issue is the APC. PeerJ, a noted OA title, publishes a “life and environmental sciences” journal whose APC is $1,095 (Rs 77,300). According to Scimago, Indian scientists publish 145,000 papers a year (2015-2017 average). Considering 55% of India’s R&D expense is currently borne by the government, and assuming the PeerJ APC as the baseline, that’s an additional expense of Rs 616.46 crore. And PeerJ is among the more affordable ones.

Where is the government going to get this money from? Its R&D expense is already considered insufficient. State-run institutions are generally worse off than centrally funded ones, PhD scholars have been agitating since last year for higher stipend and fewer arrears, and increasing allocations belie funding for pure science, which has taken a hit.

One quick way out is to turn to business enterprises, whose participation in national R&D expenditure increased from 34.2% in 2009 to 43.6% in 2014, and is likely to have increased further since. Another is to increase private sector participation, which languishes at 38.1%, among the lowest in countries of comparable power. A third is to have the government allocate its existing resources better: in 2014, a full 66% of R&D funds went to the DRDO, DoS and DAE alone. (Source for all numbers here.)

But there are two common issues with these options. First, Indian R&D could become even more biased in favour of “national priorities” and business interests, considering they’re already treated poorly. If the Government of India is considering one of these routes, it will have to ensure research priorities don’t become enslaved by profit motives or official priorities. And second, points 2 and 3 imply that this expense could increase arbitrarily without the right controls.

Plan S in its current form is an aggressive push towards OA that foists a lot of the burden on research-funders. It doesn’t deal with the problem of research-publishers – i.e. the journals – maintaining gargantuan profit margins, which led to the ‘access to knowledge’ crisis in the first place.

In fact, because scientists are also concerned with notions like “prestige” and regularly seek to have their work published in fancy journals like Nature, Science and Cell, there’s no way to keep them from looking at Nature Communications instead of PeerJ. And Nature Communications charges Rs 3.43 lakh per paper.

While it’s admirable to make publications available to everyone through the gold OA mode, Plan S simply pushes the cost from the people to the government, and forces tax money towards atrocious fees charged by private vendors like Nature. Plan S does have a specification that the APCs will be capped, such that no journal can charge more than the cap.

However, “a price cap is de facto unenforceable, as authors pay any price above the cap if they deem the cost worth the benefit,” Björn Brembs, a neurobiologist at the University of Regensburg, Germany, wrote on his blog. “Here in Germany, it has become routine in the last decade to pay any APC above the €2,000 cap imposed by the [German Research Foundation] from other sources.”

So if Plan S has to work, researcher-funders also have to help reform scientists’ and administrators’ attitude towards notions like “prestige”. A top-down mandate to publish only in certain journals won’t work if the institutions aren’t equipped, for example, to evaluate research based on factors other than ‘prestige’. And it’s nigh impossible to understate the difficulty of this challenge, especially in India – so much so that a new idea the DST is mulling to boost research plays along instead of trying to fight it.

This DST scheme proposes paying researchers to have their papers published, with Rs 50,000 for publishing in foreign journals and Rs 20,000 for publishing in Indian ones. This already shows a preference towards foreign titles, although that’s partly understandable (such as because of the pressures of universities wanting to achieve good global rankings).

Also read: How Scihub Is at the Forefront of the Quest to Frame Scientific Knowledge as Public Good

More importantly, it also raises concerns about how the government’s negotiations with journals over the APCs will go. Rs 20,000-50,000 sounds like a big figure but in international scientific publishing, it’s really not. Even domestically speaking, India spent Rs 85,326 crore on R&D in 2014, when 130,891 papers were published (indexed by Scimago), which works out to Rs 65 lakh per paper, excluding patents and other outcomes.

However, if the government is not willing to spend more, then Plan S journals might not be keen on working with India.

5. Power equations remain what they are

Indeed, for all the machinations, it’s an unwritten truth that the centre of power in scientific publishing lies with the publishers – not with the people who pay the funders, the funders who pay the researchers, not even the researchers who fill the publishers’ pages. Apart from reforming academics’ attitudes, Plan S also has to take this beast head-on, lest it is left kowtowing to the journals’ interests.

In 2012, Ross Mounce, the open access grants manager at Arcadia Fund, noticed that the Nature Publishing Group was charging more for admitting papers on which a CC BY license had to be attached – i.e. the gold OA route. Such a license, which stands for Creative Commons Attribution, allows readers to reproduce the contents of the paper elsewhere at no additional cost and together with proper attribution. It also allows authors to retain copyright, instead of transferring it to the journal.

Mounce wrote, “Applying a license to a digital work costs nothing. By charging £100-400 more for CC BY, they’re really taking the piss – charging more for ABSOLUTELY NO ADDITIONAL EFFORT on their part” (emphasis in the original).

His comment spotlights the central animus well: journals can arbitrarily increase their APCs because they can, the researchers and universities will still want to publish there because they think they ought to – and a Plan S that doesn’t prepare for this will simply recast the problem, postponing its tipping point instead of resolving it.

This in turn could come back to bite India in the back, as it will every other country where the government wants research output to grow together with quality even as it underspends on R&D and education.

The larger publishers aside, Plan S will also hit numerous society journals – i.e. journals published by societies dedicated to the study and popularisation of specific areas of science – in which many Indian researchers publish.

These publishers are relatively smaller in scale and more diminutive in their influence on the relationship between research administrators and publishers. In other words, they are less able to modify their business models to make room for Plan S by 2020.

A position paper by the UK-based Association of Learned and Professional Society Publishers drew attention to Plan S’s encouragement of what it calls “transformative deals”. Through these, Plan S wants publishers to waive APCs for low-income countries and discounted rates for middle-income countries, like India and China.

If such deals do come through, it will be great for Asian, African and Latin American researchers, who will suddenly have unfettered access to high-quality titles like PLOS One, PeerJ, etc. But it’s not clear how society publishers, such as the European Molecular Biology Organisation, will be expected to deal with the costs and (not insignificant) technical issues.

As one observer wrote on The Scholarly Kitchen,

… society journals tend to publish hybrid titles, providing authors with a choice. For authors who wish to have their work immediately accessible via liberal reuse licenses, gold OA options are readily available. For those authors who cannot, or do not wish to pay an APC, society journals nearly all support green OA with embargo periods ranging from 3 to 24 months, depending on the field…

According to Publisso, “Green open access is where an author publishes their article in any journal and then self-archives a copy in a freely accessible institutional or specialist online archive known as a repository, or on a website.” (The DST and the Department of Biotechnology already maintain a green OA repository of studies they fund.)

So Plan S will effectively expect society publishers to ‘flip’ their publishing model towards gold OA starting 2020. And society publishers might not be ready to do so by then, especially since Plan S also doesn’t offer any helpful suggestions on this front.