Could All Shapes Have Their Origin in a Universal Genetic Code of Form?

The renowned architect Haresh Lalvani is thinking of ways in which the convergence of synthetic biology and nanotechnology will enable us to shape our environment based on the fundamental laws of nature.

Haresh Lalvani, a professor at the Pratt School of Architecture, New York, and co-founder and director of its Center for Experimental Structures, has long wondered if the way of the DNA molecule, which encodes all living structures, was a way that human-made designs could follow. He was in India briefly to receive a lifetime achievement award from IIT Kharagpur. While passing through Mumbai on his way back, he agreed to speak with S Ananthanarayanan for The Wire about his work.

Lalvani is an internationally recognised ‘architect-morphologist, artist-inventor and design scientist’ who looks at architecture beyond buildings, to take in shapes and forms of all description. His creations, on display as permanent installations in New York, in museums and in exhibitions, show glimpses of new directions and a breakaway from uniformity, with the use of technology and mathematics, for discovery, invention and industrial production.

The images (below) show some of his creations, a sculpture, a set of columns and a set of fruit platters, fabricated out of laser-cut sheet metal. The sculpture in the first image is made of welded pieces of quarter-inch-thick stainless-steel plate, and is installed at a busy street corner in New York. The second picture is of the AlgoRhythm Columns, 8-12 feet tall in folded sheet metal. They are a series from which a set of four in titanium are at the Museum of Modern Art, New York. The third picture is of the Morphing Platters, made of laser-cut steel, which were shown at an exhibition in 2011 presented by Murray Moss. Computer-generated designs have been combined with a mix of computer-controlled fabrication and traditional forming methods. The concept behind the fluid harmony and facility of production of these creations is one that was inspired by the way living things build. Living things are mass-customised, with economy in production, yet each one is harmonious, suits its purpose and is unique. Lalvani conceives of a morphological genome, similar to its biological counterpart, made of DNA and specifies the structure of living things, as a mathematical construct to specify a set of numbers that define a structure. And just as changes in the units along the length of the DNA change the organism, varying the parameters along the morphological genome would alter the form that they represent.

Like the well-known Cartesian coordinates x, y and z, which pinpoint a location in three dimensional space, Lalvani proposes that the many features of a shape or design can be represented by numbers in a multidimensional space – a many dimensional space, one that we cannot physically build, called a hyperspace. Each point in hyperspace would then represent a shape or a form. And a change from one form to another would correspond to a path from one point to another in the space, and the changes in the numbers along the axes of the space. The sequences of these numbers represent the genetic code of form. In simple terms, in the same way we identify a shade of colour by specifying the three numbers for intensity of the primary colours, red, green and blue, we can specify a shape or form by a set of numbers indicated by a location in the morphological hyperspace.

An architect by training, Lalvani brings in a palette of skills and knowledge to guide his thinking. Biology, genetics, mathematics, particularly number theory, geometry and topology, chemistry, the science of materials, computers are all part of his ken. “It was a project we did in the final semester of my undergraduate architecture studies that set me thinking of architecture in a wider sense,” he says. “The assignment, in fact, was no assignment – we were asked to think of our own topic and work on it as we liked. Being set free brought with it a huge responsibility.” And in Lalvani’s case, it brought growth, study and contemplation, and a life-long search. 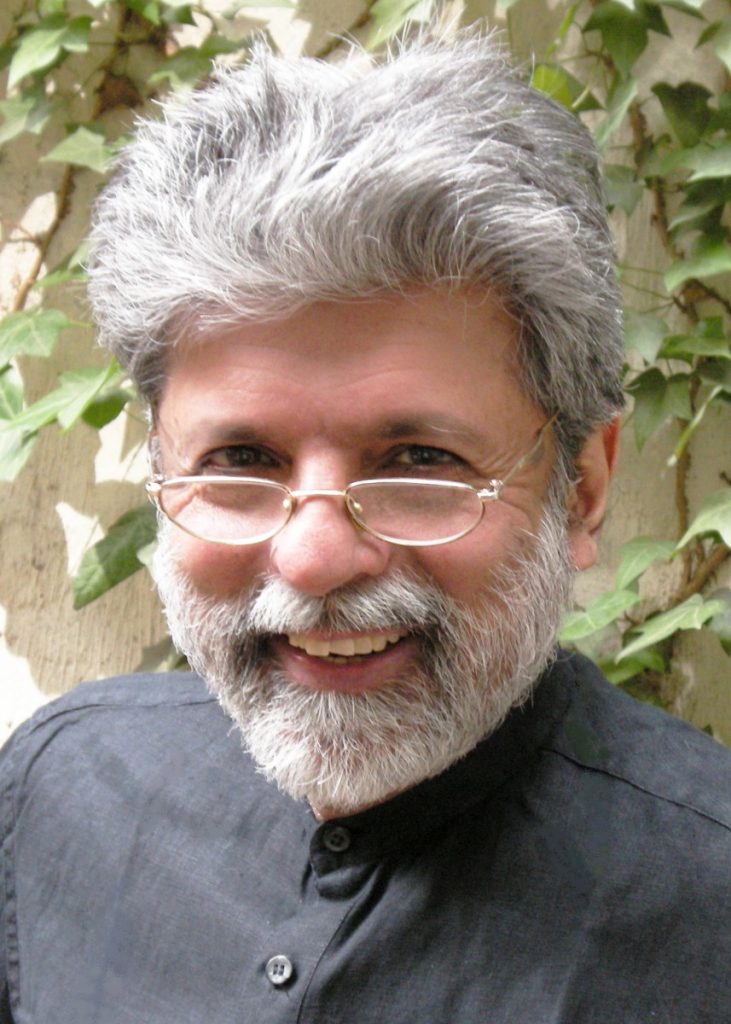 As an undergraduate, thanks to the environment at IIT Kharagpur, Lalvani formed a strong connection with mathematics, engineering, chemistry and biology. At the time, he was in contact with Robert Le Ricolais, the French visionary considered the ‘father of space structures’ and who used mathematics and natural structures in his work. There were also others who shaped Lalvani’s thinking, such as the German biologist J.G. Helmcke, Frei Otto – well-known for tensile and membrane structures – and also the turn-of-the-century Catalonian, Antoni Gaudi.

Buckminster Fuller, under whom Lalvani did his doctoral work, was a powerful influence. As an undergraduate student, Lalvani had reconstructed Fuller’s models using matchsticks and marbles, and reading Robert Horne’s article on the similarities between Fuller’s domes and virus structures – the first connection between architecture and nano-design in nature – along with electron micrographs of single-celled organisms sent to him in stereo images by Helmcke, were watershed moments in his development.

In the early 1970s, when he was deeply immersed in the relationship between architecture and the natural world, he was invited to a conference by James Watson, the co-discoverer of the DNA structure. “It was during this period that an idea struck me. The seemingly infinite variety of forms we see in biology, manipulated by just four chemical alphabets of DNA, raised a fundamental question for me. Is there an equivalent for architecture and human-made designs… is there a universal genetic code of form?”

Over the years, Lalvani has developed the idea to considerable sophistication. The principles of morphogenomics, or morphological informatics, deal with indexing the numbers-based morphological genome so that it could yield families of form, from which architecturally relevant designs can then be derived. Once this indexing is done, similarly classified physical constraints would need to be overlaid so that only practical structures are encoded.

And then, when the limits placed by the program, function, our senses, limits of understanding and cultural constraints are imposed, Lalvani, in his 2003 essay ‘Organic Approach to Architecture’, says that what is left is “a morphologically structured network of information … that permits digital manipulation of form in the design process. When tied to digital manufacturing, this enables mass customisation in industrial production.”

Lalvani describes the egg-shaped sculpture in the street corner in New York, called SEED54, as a tiling structure, a curved surface using geometric shapes like the work of the noted Dutch artist M.C. Escher. SEED54 is made of irregular hexagons welded together, with curving, non-repeating apertures. The structure was inspired by a class of surfaces discovered by the mathematician-physicist Roger Penrose, with whose work Lalvani was deeply involved in the early 1980s, while completing his doctoral work. In the AlgoRhythm columns, single, continuous metal sheets were shaped into fluid forms by computer-controlled machines, into geometries that arose from mathematics. The process, which Lalvani patented in collaboration with the company Milgo-Bufkin (which makes all his metal works), allows structures to be modelled and fabricated with greater freedom and flexibility than with moulds and dies, and obviously of lower cost.

“Integration of shaping (morphology) and making (fabrication) into a seamless whole, like it is in nature,” says Lalvani. “Seams are at the cornerstone… Seams take on hyperbolic shapes … and the seams guide the sinuous bends,” says Lisa Iwamoto, a professor at University of California at Berkeley, whose work focuses on fabrication techniques for architecture, in a review published by the Princeton Architectural Press.

Lalvani has since been interested in new technologies that could create self-forming shapes, or structures that erect themselves rapidly using not joints and rivets but continuous surfaces shaped by forces like gravity, of their own weight. One application that interests him is emergency shelters for people displaced by floods and hurricanes.

The Morphing Fruit Platters were laser-cut from stainless steel according to a computer program that generated patterns based on the mathematical form, the Archimedean spiral, and parameterised by the distance between a pair of points. As and when this distance was varied, the program turned out an unending series of surreal patterns, each different from others, harmonious but not symmetric. As the laser cutter was controlled by the computer, each round of cutting needed no fresh die or template and it used the same inches of cut. “We would have liked it if the patrons at the Design Miami 2011 exhibition, where we launched this product, could have ordered a pattern they saw on the computer screen and collected the product at the checkout.”

“The computer scientist Alan Turing had suggested that patterns like a zebra’s stripes, or a leopard’s spots, were based on interacting chemicals,” he continues. “Stephen Wolfram proposed ‘cellular automata’ rules that relate combinations of adjacent black and white cells as a basis for such patterns. But in the Morphing Platters, we generated patterns based on the distance between a pair of points. This was different.”

Coming back to Lalvani’s vision of structures taking shape based on the “DNA of form”, DNA technology is being used to design better crops, food, drugs and biofuels. We also have artificial intelligence, where machines are self-learning to become better at tasks ranging from image recognition to operating driverless cars. Lalvani’s ultimate vision is to see the link between physical building processes, synthetic or organic, to the morphological genome, to create “artificial architecture.”

There is a long way to go, but when this happens, “form, space, material and process will become one”, as in nature. “Objects will begin to design and shape themselves.”  In the meantime, he is busy refining aspects of this work, filling in gaps here and there, extending where possible, and thinking of ways in which the convergence of synthetic biology and nanotechnology will enable us shape and make things at larger scales so that they, in turn, will shape our environment based on the fundamental laws of nature.

S. Ananthanarayanan has been writing columns for Indian newspapers on developments in science and technology for lay-person readers, and blogs at simplescience.in.