The Sea, the Sea! The Primordial Metaphor That Has Stayed With Science

The progress of scientific knowledge has revealed a cluster of phenomena that can be explained by way of an analogy with waves and the ocean. 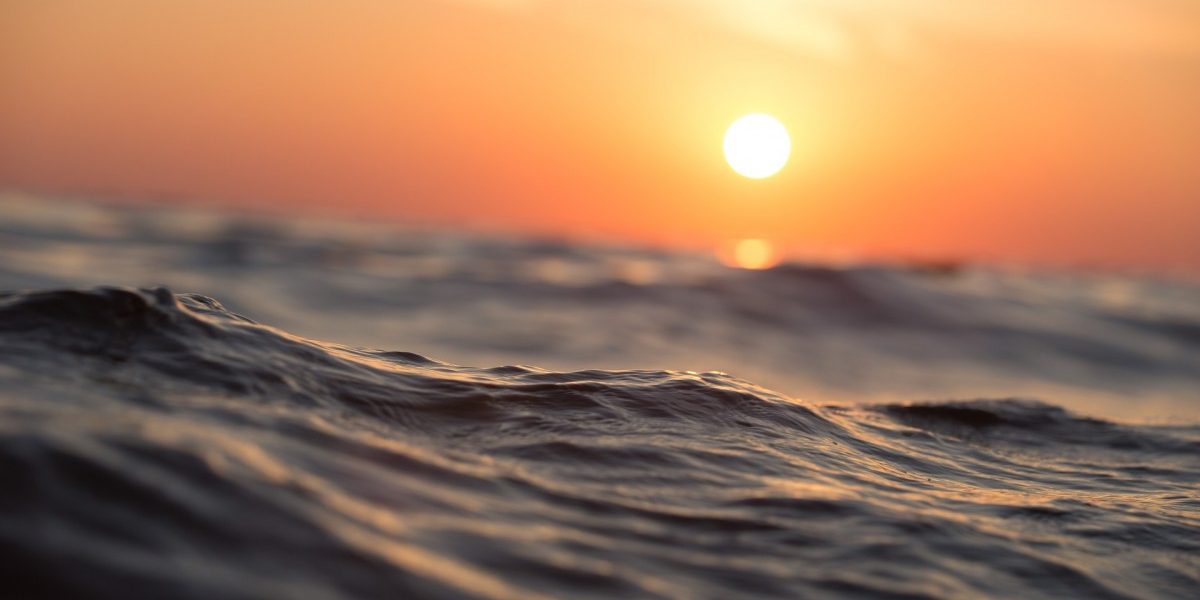 Through poems and creation myths, the metaphor of the sea seems evermore to be passing into actuality. Credit: Pexels/pixabay

The discovery of gravitational waves is now common knowledge, but one of its more fascinating results still remains largely unknown. The waves are described as ripples in the fabric of spacetime, a metaphor that has allowed scientists to model them as sound. In other words, the universe can be said to have a ‘music’ to it, ‘heard’ by human technology 1.3 billion years after two black holes merged, their swansong distorting space and time in its wake.

This music, dubbed a ‘chirp’, harkens to the musical nature of the cosmos that dates as far back as philosophy does. The Pythagoreans believed in music representing the order of the universe, as did Plato. In the philosophic tradition closer home, Akasha – the aether, first of the Panchamahabhoota, or “five gross elements” – was identified as having the essential attribute of sound.

Music has also been central to the thought of Friedrich Nietzsche, Arthur Schopenhauer, Gilles Deleuze and many others. Among scientists, Albert Einstein, whose theory of general predicted the existence of gravitational waves, heralded music as a guide to his own scientific thoughts about the cosmos.

There is much that philosophers have similarly guessed at that science has since managed to expound. For example, the ‘chirp’, compared to the sound of something dropping in a pool of water, ties in neatly with another ancient philosophical guess: the metaphor of our cosmos as an infinite ocean. It sounds like the lost matter of the black holes was simply swallowed by the cosmic sea, and our sages might have agreed. With this new way of investigating the world, we have simply added another piece of evidence supporting the cosmic metaphor.

In fact, the progress of scientific knowledge has revealed a cluster of phenomena that can be explained by way of an analogy with waves and the ocean. The most ubiquitous is the notion of fields, such as the ones used to describe the behaviour of subatomic particles as well as spacetime. Gravitational waves, for example, are formed when massive objects move through spacetime, much like a ship would when traversing the sea. When visualised, the waves’ propagation can be seen to follow the exact formation of a ripple in still water. The equations that describe the flow of fluids such as water are also qualitatively similar to models scientists use to describe the motion of massive objects in spacetime and that of charges in an electromagnetic field.

At the largest scale, the cosmological principle finds an almost perfect analogy with the sea, while at the smallest, quantum fields address particulate activity in the vacuum of space in quantum field theory. Fluctuations in these fields give rise to particles that compose all of reality.

Psychology makes ample use of the metaphor as well, employing it for the unknown about our own consciousness, on which our thoughts and personalities are often represented as icebergs, with only their tips exposed to us.

In a more material sense, evolutionary biology asserts that life evolved from the sea. Therefore, deep within the recesses of our primordial psyche, patterns unknown to us are thought to be encoded, informing our intuitions, including those about the sea and the cosmos.

Predating these formulations by centuries, the metaphor of the sea is recurrent in many traditions of philosophy, not to mention religion and poetry.  The earliest creation hymns, such as the one from the Rg Veda, analogise the universe before creation as being a “signless sea”, devoid of any opposites of being and non-being, night and day, from which all knowable and nameable things including time began. This is close to a description of the universe’s evolution, where matter, elements, stars and eventually entire galaxies evolved against the backdrop of the nearly isotropic microwave radiation left behind by the Big Bang.

Similarly, Dao, the creation principle in Lao Tzu’s Tao Te Ching, is compared to a still sea, unknowable and unnameable in difference, permanent and static, allowing for differences to emerge like ripples. Religions across the world, disconnected by time and geography, each describe eschatological myths that show a regress back into this signless sea for all that exists, followed by a new cycle of life.

What is it that makes the metaphor so effective in so many diverse fields? There are hints to this effect in the phenomena the metaphor applies to: they all refer to things – quantum fields, spacetime and human psyche – when considered in their entirety. They also invoke a sense of timelessness for which the sea doubles up in our representation.

Our lives, like bubbles on the waves of the cosmic sea, emerge and fade away, but the sea endures and the cycle continues. Similarly, our thoughts emerge, evolve and slip back back into consciousness; meanings emerge, change and die out within the movements of language as a whole. 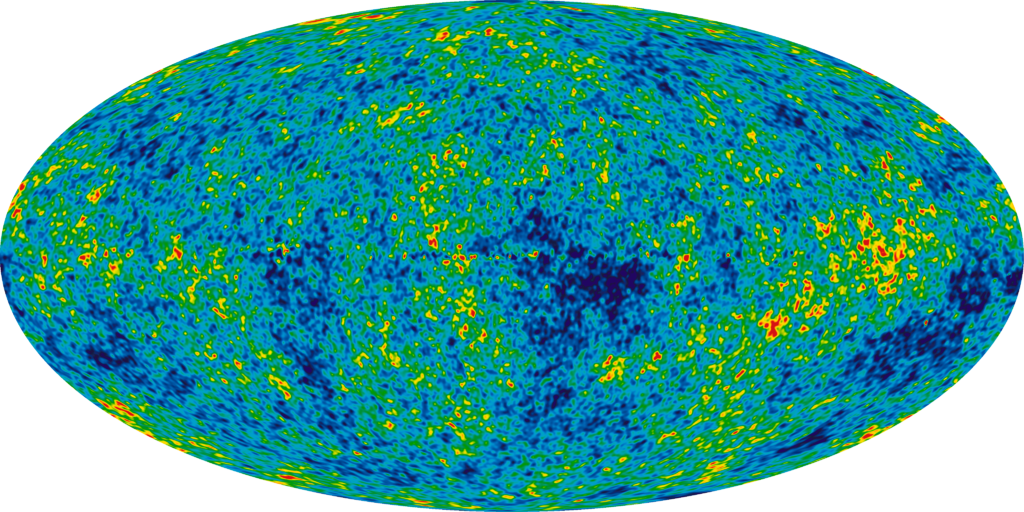 A mollweide projection of the cosmic microwave background radiation across the entire sky, with data from the Wilkinson Microwave Anisotropy Probe, 2012. Credit: WMAP/NASA

Additionally, there is also a correspondence to continuous and perfectly symmetrical phenomena, infinite in their domain, over which some kind of discrete information – a star in the sky, a thought in the mind, a word in language – emerges. It is this general analogy of information as a break-in-symmetry that makes the metaphor click for all manner of human epistemology; meaning-making relies on some form of information as its basis. Similarly, our knowledge of all creation is only available to us because the information of being, directly available in experience, seems qualitatively asymmetrical from non-being.

Consider a sailor stuck at sea with no land in sight in any direction. How would she known the presence of an island when she sees one? How do you distinguish stars on a black night or words on a blank page? It is because they stand out, embodying a difference, a break in symmetry, that forms the basis for perception and understanding of the object as such: as a particular one of its sort, as a separation from uniformity. Emmy Noether’s theorem tells us that each conservation principle – of mass, charge, momentum or energy – can be derived from a corresponding symmetry in the laws of nature that has held since a fraction of a second after the Big Bang. Rewinding this clock, it is easy to imagine an infinitely symmetric primordial universe for which all transformations are invariant. They make no difference.

Such a universe would then be a single conserved entity. In the same vein, a mind empty of differences would also become void of thought, desires, even the conception of its own self, like the teachings of meditative Buddhism. Such a mind would then produce no words either, as even an individual ‘sign’ – a word – derives its reference from its difference from the rest of language and the objects that it names.

In this context, the teachings of the Upanishad, where the master remains silent in his teachings about reality, or similar pronouncements about the master in Tao Te Ching, become, to a certain extent, demystified.

This formulation of information is relatively new to philosophy and science. However, the comparison applies to other ways information has been characterised as well, and which are revealed by asking our observer at sea another question.

Which direction potentially goes towards the shore, and how certain can the sailor be about her choice? Any answer to these questions is as likely as any other. Therefore any particular choice’s falsifiability – whether the path actually leads to shore – is constrained by its infinitely similar variations because all directions potentially lead to the same shore.

These measures of falsifiability and probabilities form other metrics of defining information, described by Karl Popper and Claude Shannon respectively. And using them, we can tell how our marooned sailor has no information about her whereabouts, similar to how we have no information about our position relative to the entire universe as a whole because of the (near-absolute) cosmological uniformity.

These analogies of symmetry and continuity are augmented by those of discreteness and transience, both of which are also apparent in the sea. On the face of the continuity that the ocean represents, islands and peninsulas emerge like galaxies birthed into the primordial universe. Such evolution transforms the potentiality of the cosmos into the actuality of our physical cosmos and its non-physical constituents.

This mechanism, incidentally, also reflects the thoughts of Aristotle’s Metaphysics and the meditations of the creation hymn in the Rg Veda. Creation remains suspended between being and non-being, potentially being both until it is brought into the realm of the ‘actual’, much like waves form where the sea contradicts itself or thoughts form where the mind’s stillness has become agitated. This description closely parallels the Copenhagen interpretation of quantum mechanics, formulated in the mid- to late-1920s by Niels Bohr and Werner Heisenberg.

Almost all of us have had similar poetic intuitions stirred in us in the presence of the ocean. It is remarkable that science, too, ostensibly the farthest removed from poetic flair and vastly more interested in objective truths, is discovering how our reality is symmetric and poetic. Through poems and creation myths, the metaphor of the sea seems evermore to be passing into actuality.