A New Podcast Exploring History, Science and Cultures in Stories from the Margins

The story of cholera anchors the first episode of Scrolls & Leaves, a new podcast co-hosted by Mary-Rose Abraham and Gayathri Vaidyanathan. 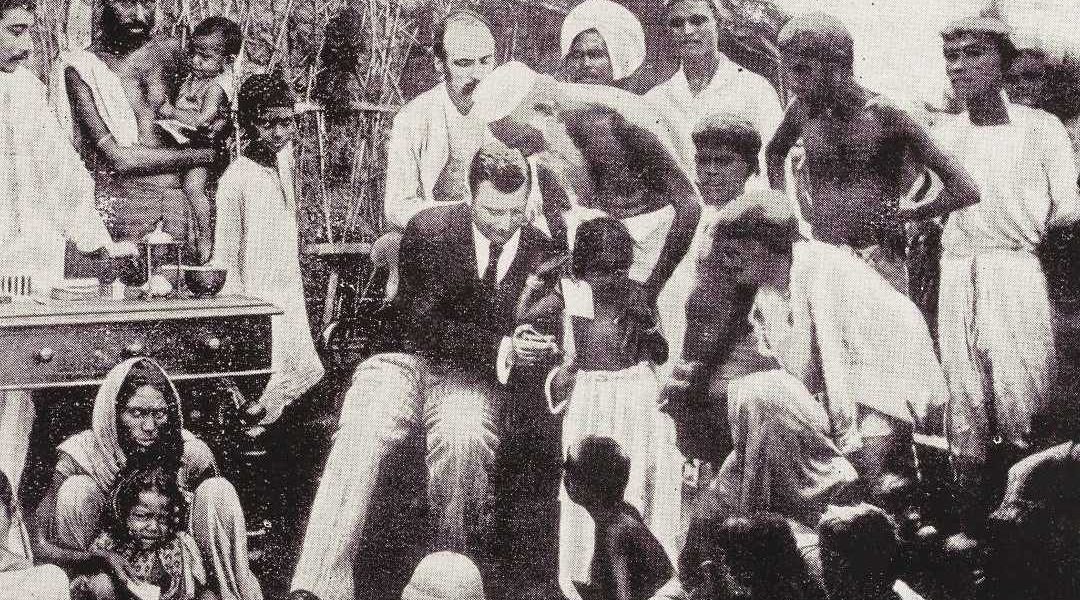 Waldemar Haffkine, who discovered the cholera vaccine in India, inoculates folks in Kolkata in 1894. Photo: @ExploreWellcome In August 1817, Robert Tytler, a British surgeon, enters a hut in the Jessore bazaar and encounters a man with diarrhoea and vomiting. Tytler is shaken. This seems like cholera. Within days, dozens more die, and soon, the funeral pyres burn continuously in Calcutta. The cholera epidemic has begun.

The story of cholera anchors the first episode of Scrolls & Leaves, a new podcast that launched on August 27. The episode explores how the deadly disease unleashed waves of pandemics worldwide, testing the notions of borders. As governments and colonial powers tried to control its spread, cholera prompted drastic action in the form of increased surveillance, quarantines and even assault. The episode concludes by tying these historical events to the experiences of our current pandemic, helping the listener to arrive at a new understanding of the present.

“Cholera redefined our notions of quarantine, trade, commerce, disease,” said Pratik Chakrabarti, a professor and chair of the Centre for the History of Science, Technology and Medicine at the University of Manchester. “[Cholera] you can almost read as a case study of modern pandemics. It’s a useful mirror to understand all subsequent modern pandemics by.”

When cholera emerged in 1817 in Bengal, its movement across the world was swift. The 19th century saw steamships replace sailboats to cut travel time significantly. So cholera was the first disease to transcend and modify borders.

This border was personal – the border of the skin – and what crosses that border as a microbe or a needle that injects a vaccine. But borders were also more conventional, such as front doors or fences – the borders of our homes – to the borders around a town or nation. A border is also breached in the crossover of a virus from forests to human settlements.

“Then more in the 19th, and especially the 20th century, disease borders often became coterminous with national borders and that’s when you get in disease times, a kind of a link between keeping disease out and keeping out people,” said Alison Bashford, Research Professor in History at the University of New South Wales in Sydney.

The reaction to cholera was to tighten borders. This took a variety of forms. European colonisers fear they will catch disease from the Indians. So they draw a border around themselves. They set up “white towns” and crowd Indians into “black towns.” It gets worse. Public health improvements are installed in European areas while Indian areas must contend with dirty, unfiltered water. Controls are put in place to monitor and police devotees at the Kumbh Mela and pilgrims setting off for the Hajj.

Many of the restrictions enforced in India during the cholera outbreaks echo in modern times, especially during the current pandemic.

‘Pandemics and Borders’ is the first of two documentary-style episodes about COVID-19. The second episode, ‘Healing Plants’, releases next month.

These episodes form part of ‘Trade Winds’, the first season of Scrolls & Leaves. The season is set on the Indian subcontinent, when the monsoon winds carried ships across the seas in their quest for the riches of “the East.” The season spans Muziris, the ancient port of 2,000 years ago, to the height of European colonialism in the 19th century. The season’s remaining four episodes will focus on these two millennia of exchange of culture, science, language, literature and the arts.

Scrolls & Leaves is written and co-hosted by longtime audio journalists Mary-Rose Abraham and Gayathri Vaidyanathan, in collaboration with the archives at the National Centre for Biological Sciences in Bengaluru. Abraham and Vaidyanathan have often wondered why global events are usually contextualised using Western histories. By delving into lesser-known histories, the margins, they are hoping to find new ways of understanding a sometimes inexplicable world.

The format of the episodes includes non-fiction storytelling, interviews with noted historians and scientists and sound-rich stories. These fictional soundscapes immerse the listener in the past. Episodes are sound designed by Nikhil Nagaraj, the principal sound designer at 12Hz Sound Laboratories. Scrolls & Leaves is a binaural podcast, creating an immersive, 3D-sound experience for the listener wearing headphones.