Scientists have found 13,000-year-old human footprints on an island off the Canadian coast, making them the oldest found thus far in North America. 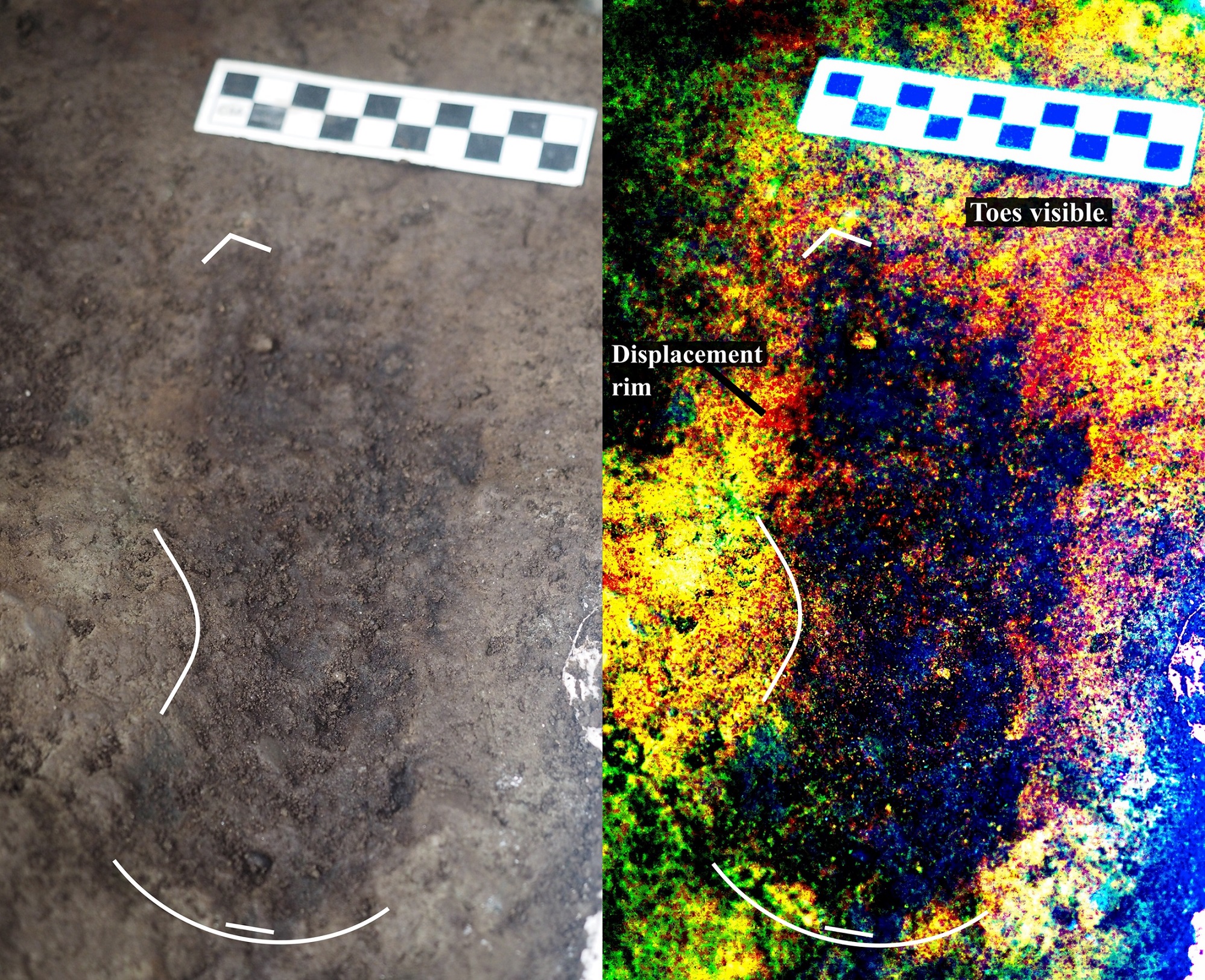 One of the footprints found on Calvert Island, found to be ~13,000 years old. Credit: Duncan McLaren

The oldest footprints of humans in North American have been discovered off the coast of British Columbia, Canada. According to the team of Canadian scientists that discovered them, the prints are about 13,000 years old, proving that humans arrived on the continent before the end of the last Ice Age eleven millennia ago.

The discovery is “very unexpected,” according to Brent Ward, a geologist at Simon Fraser University, Canada, who was not associated with the new study. “The preservation of footprints, especially in a marine environment is rare.”

The find is also remarkable given the terrain along the North American coast today, which is covered in thick forests and peat bogs, making it difficult for researchers to look for archaeological remains. The sea levels were different as well. During the last Ice Age, sea levels on the islands off the mainland coast were almost 150 metres lower than they are today, while further inland they were almost 200 metres higher. However, between the mainland and the island coasts, the levels remained relatively stable. At the time, level on Calvert Island, where the footprints were found, was two to three metres lower today.

This area is believed to be part of the route that the earliest migrants took to enter North America – at least according to one theory that tries to explain how the first settlers occupied the continent. A lower sea during the Ice Age would have exposed a lot of the land along the coasts but which is underwater today. This includes a swathe of land almost 1,000 kilometres across that connected North America and Asia along what is today the Bering Strait.

It is now widely accepted that the early North American settlers walked over this land bridge, called Beringia, from Asia and migrated south along the Pacific coast about 16,000 years ago.

It seems that a group of these early settlers left their footprints on the coastal sands, the first of which was found in 2014. The discoverers came back for a couple years more in 2015 to dig some more and expand their site, and discovered a total of 29 footprints going in different directions. They were buried about two feet under the beach sand and were filled with darker sand, gravel and another layer of clay. All these materials could have helped preserve the prints; some of them even had clear impressions of toes.

The prints were 15-28 cm long and 6-13 cm wide. They probably belonged to three individuals: two adults and one child. 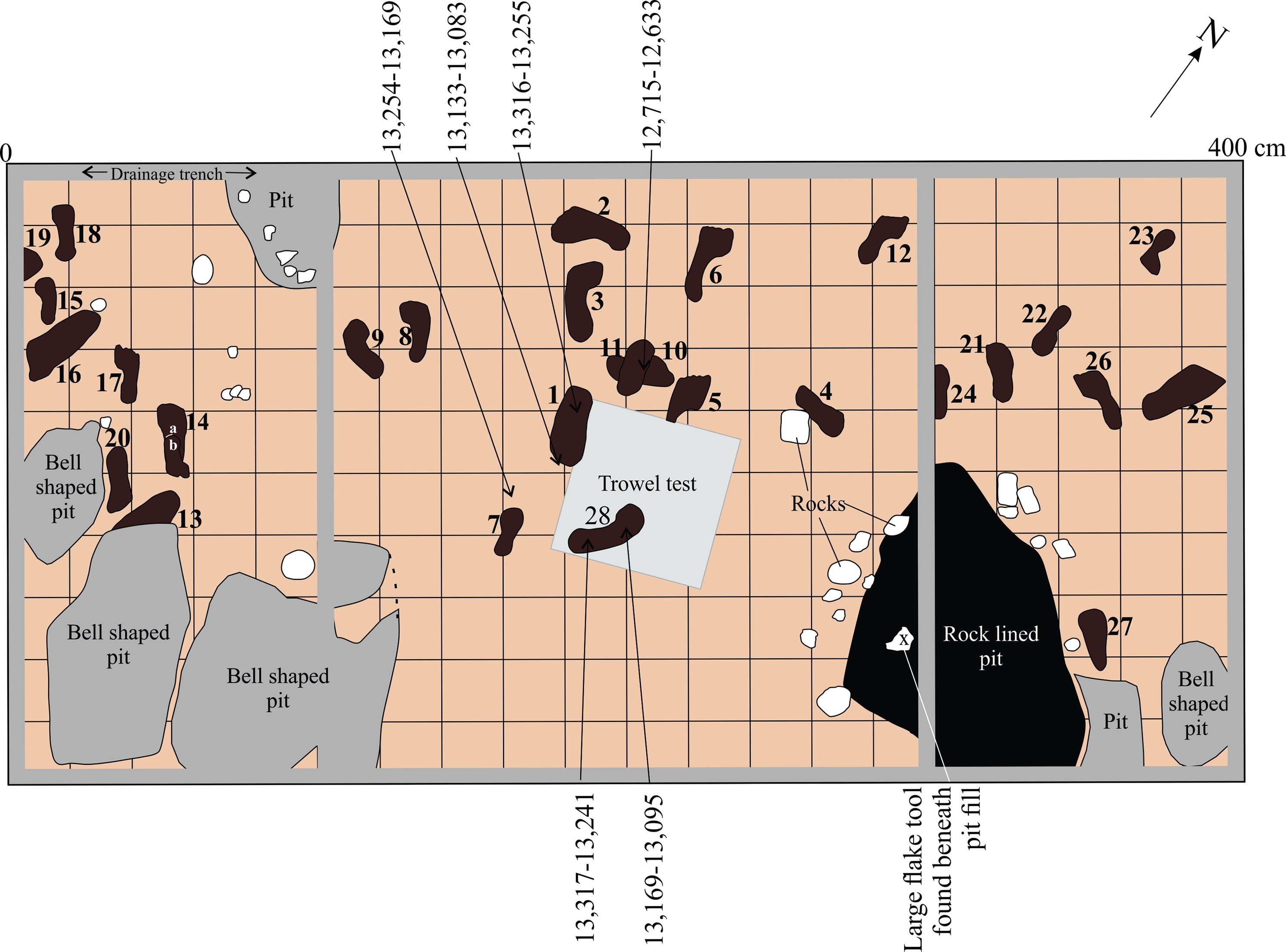 An illustration of the 28 footprints found on the coast of Calvert Island. Their ages as estimated by radiocarbon dating are mentioned for some of the prints. Credit: Duncan McLaren

The scientists used radiocarbon dating to determine the age of the prints by using the layers below and above them, and pieces of wood found embedded in one of them, as proxies. The black clay filling the impression was estimated to be ~12,500 years old and the layer below the prints, ~13,300-12,600 years old.

They’re currently the oldest footprints in North America. “This could push the earliest evidence of humans along the Northwest Coast by about 400 years,” Ben Potter, an archaeologist at the University of Alaska, Fairbanks, told The Wire.

Earlier this year, Potter and co. reported DNA evidence of a child from a burial site in Alaska about 11,500 years old, one of the earliest such finds, coinciding with the Ice Age. Though the genetic material was close to that of ancient Native Americans, it also different in some important ways. The implication was thatat least two populations had arrived in North America. Another study in the Haida Gwaii islands off the coast of British Columbia found stone tools dating back to ~12,600-12,800 years ago.

The new study adds to what we know of how early migrants crossed over Beringia into present-day Canada, at a time when most of North America was covered in ice. One hypothesis says they used routes along the coast, between the glaciers and the sea, where plants and animals survived and created conditions favourable for human settlement. Another hypothesis says the migrants moved south through ice-free corridors.

The latest gives a leg-up to the coastal route idea. The migrants’ tracks do not lead anywhere but congregate along the coast. According to the authors, people getting off from a boat and gathering on the beach could have made these tracks.

Although the dating done so far suggests that the footprints coincide with the end of the last Ice Age, Potter pointed out that there are some outliers in data, which the authors also acknowledge. Only further analysis will be able to pin down the precise age, of footprints as well as “cultural features” like tools, according to Duncan McLaren <>.

“Understanding the human ecology of the earliest Paleo-Indians as they shifted from Beringian to mid-latitude and/or coastal environments is an important problem,” Potter said, “and this discovery provides significant new data with respect to early coastal occupations.”

The authors also believe there may be more footprints in the region. However, they’ve decided to hold back from more excavations for now. This is to let other researchers with better technology to dig here to duplicate or maybe even their findings.