As if wary of being outdone by the science itself, Douglas Preston's story in the New Yorker about 'the day the dinosaurs died' throws up more problems the further you dig down. 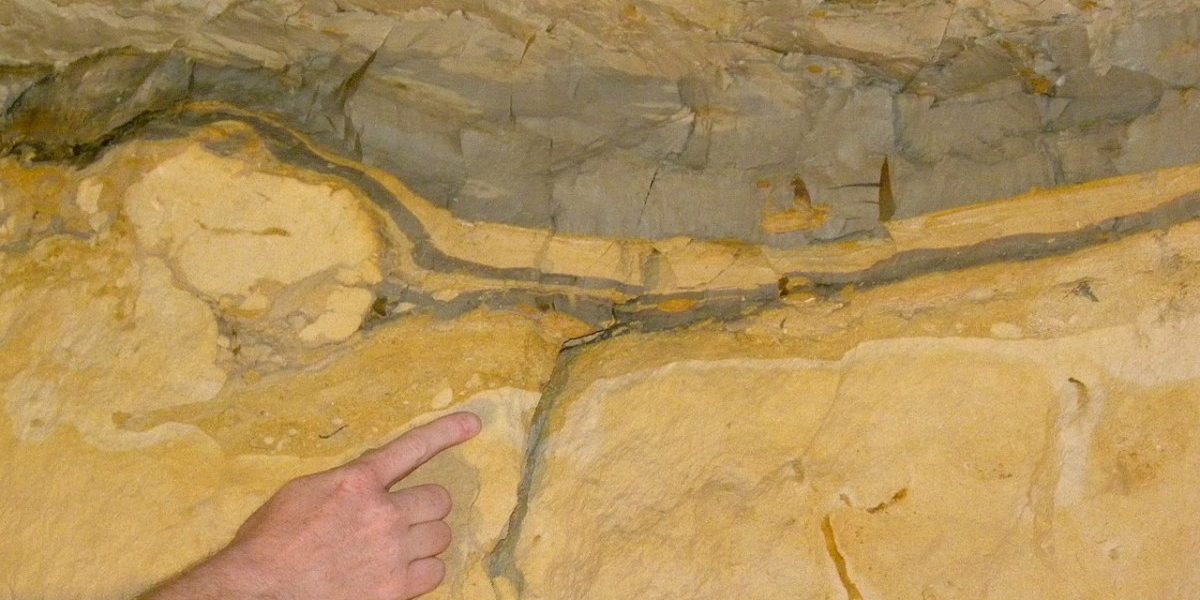 The KT boundary as visible in the Geulhemmergroeve tunnels, The Netherlands. Credit: Wilson44691/Wikimedia Commons

In a sensational announcement, scientists from the United States claim to have found fish fossils in North Dakota containing fragments of rock that were blasted out when the meteor that killed the dinosaurs crashed on Earth 66 million years ago. But that’s as good as the story gets before the heaviness of the hype surrounding its publication brings it crashing down.

The scientists made their announcement via a paper in the journal Proceedings of the National Academy of Sciences (PNAS). PNAS was due to publish the paper next week. However, its authors had requested the paper be released sooner so news outlets could publish their accounts of the study ahead of everyone else. This is where the problems begin.

The discovery is concerned with the so-called KT (a.k.a. K-Pg) boundary. As palaeontologists and geologists dig the ground, they see layers of soil and rock that correspond to older and older periods of Earth’s history. At a depth corresponding to 66 million years ago, there is a centimetre-thick layer of soot to be found at all dig sites on the planet. This is the KT boundary.

Scientists think it was deposited by a meteor that struck Earth at the time and wiped the dinosaurs out. Now, Robert DePalma, a graduate student at the University of Kansas, and his colleagues claim to have found fossils close below this boundary, corresponding to the animals that should have roamed Earth shortly before the killer rock showed up. And based on materials lodged in these fossils, DePalma and co. claim to have pieced together a snapshot of that fateful day.

But as if it is wary of being outdone by the science itself, Douglas Preston’s story in the New Yorker also throws up more problems the further you dig down.

Many scientific journals reach out to journalists to cover a soon-to-be-published paper a fixed number of days before the paper will be actually published, and become known to the wider world. The period between the notice and the publication is called the embargo period, and journalists use it to work on their reports.

But every once in a while, some news publication breaks the embargo and publicises a story, and the paper behind it, before the agreed time. Journals understandably don’t take well to this – but news publications take it worse. Why wouldn’t they: they have just been stiffed of a big break, and have had the rug pulled from under them by a competitor that is going to hog all the limelight now.

The New Yorker committed a version of this mistake in this case as well as hyped up the results, apparently with the encouragement of DePalma, the paper’s first author.

The otherwise frequently celebrated magazine claimed that the team had unearthed a mass of dinosaur fossils at a North Dakota dig site. It then brings together a sequence of dramatic events that could have followed the meteor strike based on intricate clues DePalma and his colleagues supposedly found at the site.

However, scientists say this additional information isn’t to be found in the actual paper whose release PNAS fast-tracked to April 1. As Brian Switek, a natural history writer, put it, the New Yorker‘s final description was “DINO KILLER TIDAL WAVE” when it really should have been “fish pile”.

These are markers of a tendency to ‘perform’ science: to publicise it in the press and to bring it to the people before independent scientists have had a chance to take a thorough look at the paper themselves. Both DePalma and Preston seem to have failed here: the independent scientists that Preston does quote didn’t have access to the paper he did, and their understandably wary comments have been downplayed to suggest DePalma is simply fighting the odds.

But far from discovering a “graveyard” of fish fossils – as a press release from the University of California in Berkeley, where two of DePalma’s coauthors work, claims – the PNAS paper banks only on one fragment of one bone, according to an expert. Palaeontologists agree that the paper still stands for good work even if all the hype is stripped off, but that DePalma and Preston resorted to it in the first place has alarms blaring. As the question goes, why was it necessary?

Also read: The Role of Science Journalism in a World With Preprints

Science that is performed frequently leads people to believe that something more sensational is in play than is actually the case. It feeds unreasonable expectations about what scientists can achieve, about what knowledge we can have about our past, and it biases us against ideas that are actually within the realm of the possible. If this sounds trivial, replace “fossils” with “medicines” and suddenly billions of people are in danger. The underlying principle is the same: don’t fudge, don’t hype, don’t rush.

On the flip side, such performance allows scientists to make a disproportionately bigger deal of what they have achieved. This in turn draws the attention of administrators and funders towards a small group of people that isn’t doing it right, and away from a large group that is. Additionally, the journalists who slipped up got to tell thrilling detective stories instead of unravelling sober but vastly more meaningful histories.

For example, Katherine Crocker, a postdoc at the Mailman School of Public Health, New York, described the paper’s coverage in the Western press as “intellectually sloppy”, “obfuscatory and Eurocentric”. Crocker believes that most people telling these stories – of a white man journeying into an apparent wasteland to make groundbreaking discoveries – are simply feeding this misguided image. She calls instead for more attempts to understand the land and its secrets using the languages and cultures of the indigenous people who have been living there for millennia.

Some scientists have even used Preston-like examples – where journalists are keen to tell gripping stories instead of fact-checking claims and eliminating bias – to demand that journalists shouldn’t be allowed to access preprint papers. However, what DePalma has done here should remind everyone that it isn’t just journalists. Scientists also have incentives to declare fantastical results, and removing preprints is not going to make the problem go the way of the dinosaurs.