For years, experts have said that Goop, the wellness and lifestyle brand founded by the actor and entrepreneur Gwyneth Paltrow, markets pseudoscience and overblown cures. And for years, despite the criticism, Goop has just kept growing.

Now the company, which was valued at $250 million in 2018, seems poised to reach an even larger audience. Last week, Goop announced details of three new ventures: a distribution partnership with the cosmetics giant Sephora; a “wellness experience at sea” with Celebrity Cruises; and — to the chagrin of many science advocates — a six-part series on Netflix, the streaming service with more than 150 million subscribers.

The Netflix show, set to debut later this month, will feature Paltrow and colleagues exploring a range of alternative healing practices, including energy healing, exorcism, and sessions with psychic mediums. “What we try to do at Goop is to explore ideas that may seem out there, or too scary,” Elise Loehnen, the company’s chief content officer, explains in the series trailer, which also boasts that the show will feature risky and unregulated treatments. “We’re here one time, one life,” Paltrow exudes in the trailer, reflecting her signature embrace-new-ideas attitude. “How can we really milk the shit out of this?”

The backlash was immediate. On Twitter, many doctors and scientists questioned why Netflix would partner with Goop. Some upset Netflix customers announced that they had cancelled their subscriptions. “I’m frustrated that Gwyneth Paltrow and Goop and their pseudoscientific empire is being given a platform,” Timothy Caulfield, a professor of health law and science policy at the University of Alberta in Canada and a longtime Goop critic, told Undark.

Medical disinformation can have serious consequences, and it can spread quickly online. But Goop’s continued success raises questions about how experts should effectively respond to questionable information — and about what it is, exactly, that Goop is selling to its many fans.

Paltrow, who won an Academy Award for her performance in the film Shakespeare in Love, started Goop in 2008. Originally a newsletter highlighting some of Paltrow’s favourite recipes and lifestyle tips, the company grew quickly. Today, Goop publishes content on a popular website, hosts pricey wellness summits, and has launched pop-up stores in major cities.

Also Read: How We Can Tackle the Threats Posed to Public Health by Irresponsible News Reports

Its content is often a little tongue-in-cheek – one video series, called “Yep! You Can Drink That!” features a Goop editor wandering around Los Angeles sipping things like camel milk and bone broth – and targeted toward affluent, health-conscious women. On Goop’s website, customers can buy makeup, candles, cookbooks, or a $650 Italian silk shirt. The company sells supplements with names like “Why am I so effing tired?” (loaded with B-vitamins, a month’s supply of 30 pill packs costs $90), along with an $84 “amethyst crystal-infused water bottle” that helps “you tap into your own intuition.”

At times, these claims have gotten the company into trouble. In 2017, after Goop claimed that women could experience numerous health benefits by inserting a $66 piece of jade into their vaginas the California Food, Drug, and Medical Device Task Force investigated the company for unsubstantiated claims about that and other products, resulting in a $145,000 settlement.

These kinds of claims – and prices – have invited skepticism, anger, and outright mockery from many critics. In particular, Jen Gunter, an OB-GYN and author, has built a large public following through her sharp, informed, and often viral takedowns of Goop’s statements about women’s health, which she has described as “a load of garbage.”

Sometimes, though, it can seem as if the backlash simply fuels the Goop brand. A 2018 New York Times profile noted that Paltrow, in speaking to a group of Harvard Business School students, said of such “cultural firestorms”: “I can monetize those eyeballs.”

Indeed, the cycle may sound familiar to observers of the 21st century digital media landscape: a celebrity (in this case, Paltrow) makes a statement. In interviews and on social media, experts clamour to explain why that statement is misleading, false, or dangerous. Instead of apologising, the celebrity rebukes the critics and doubles down on the claim – and in return receives a publicity boost, as well the aura of edginess that comes from controversy. 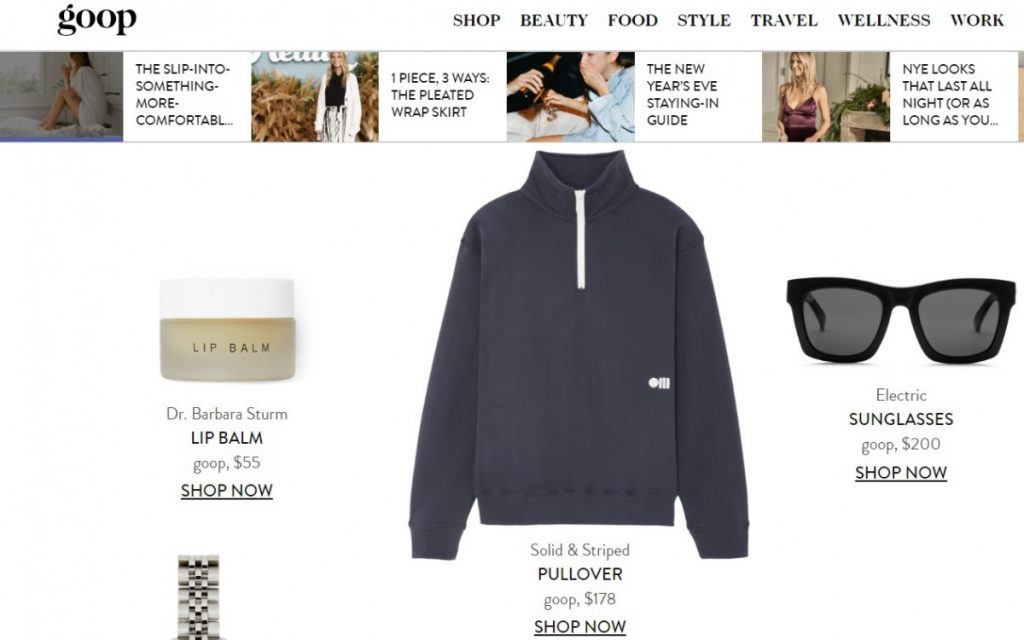 Recently, Paltrow has expressed regret about some of Goop’s past actions. “We made a few mistakes back in the early days,” she told CNBC in a segment that aired last week, adding that the company had recently started its own science and regulatory team that will allow Goop to back up its health claims – or clarify when content is “just for your entertainment.”

But in statements and interviews, Paltrow and Goop have defended their exploration of unconventional treatments, often referencing the long history of establishment medical authorities ignoring or downplaying women’s experiences. “I think the reason why Goop has become as popular as it has become, is because women feel largely ignored when it comes to talking to their doctors about how they’re feeling,” Paltrow told CNBC. “They are wanting to check out alternative ways of healing, and having autonomy over their own health and their own selves and their own sexuality and their own relationships.”

That claim has not satisfied Goop’s critics. “Giving women misinformation and disinformation about their health under the guise of empowerment is not feminism,” Gunter wrote on Twitter last week. “It is the patriarchy.”

Health is not simply about curing ailments

For some of Goop’s fans, perhaps these kinds of condemnations seem beside the point. Goop has emerged at a time when for many Americans – and especially affluent Americans – health is not simply about curing ailments, but about fine-tuning the body, optimising performance, exploring new lifestyles, and even achieving ecstatic experiences. A large wellness industry has emerged to meet those desires, often drawing on practices that seem edgy, exotic, or simply weird.

And that industry has been fueled by celebrities. In many cases, for holistic medicine practices, “the personal anecdote seems just as powerful as citing a peer reviewed study,” said Chelsea Platt, a sociologist at Park University in Missouri who studies wellness culture. Anecdotes and narrative, Platt added, are especially powerful “when you have Gwyneth Paltrow or Kourtney Kardashian or someone telling you, ‘Oh, this is my daily routine, this is what works for me.’”

Platt does worry about the message that companies like Goop may be sending to many people – and her concerns are about class, and about broader conceptions of what it means to be healthy. Goop, after all, offers a vision of wellness that’s also very expensive.

“It’s creating yet another marker of what counts as a healthy lifestyle and a healthy body, and further connects what it means to make moral, healthy choices to a certain type of consumption and commodification,” Platt said. “It narrows who is able to achieve this.”

And yet, while these and other criticisms of the Goop machine achieve rapid currency each time Paltrow and her colleagues announce a new partnership, or introduce a product that strains credulity, it’s unclear if the pushback achieves anything – or even, perhaps, gives Goop added momentum. I ran this question by Caulfield, who has been tracking Paltrow’s health-related statements for close to a decade, and who published, in 2015, a book on medical misinformation and celebrity culture titled Is Gwyneth Paltrow Wrong About Everything? Since then, of course, Paltrow’s platform has only grown.

The tone, though, can matter. “It’s not effective to just mock and make satire,” Caulfield said. “I think I’m guilty of that sometimes.” And yet, when he first started commenting on Paltrow publicly, Caulfield added, people would often react with annoyance, telling him to leave her alone and suggesting that her ideas were kooky but harmless.

“Nobody says that anymore,” he said. “There is this growing recognition that the spread of misinformation is serious.”

Michael Schulson is a contributing editor for Undark.