In October 2018, sky-watchers saw a dramatic change in Gault's lazy swing in its orbit: it had brightened all of a sudden. 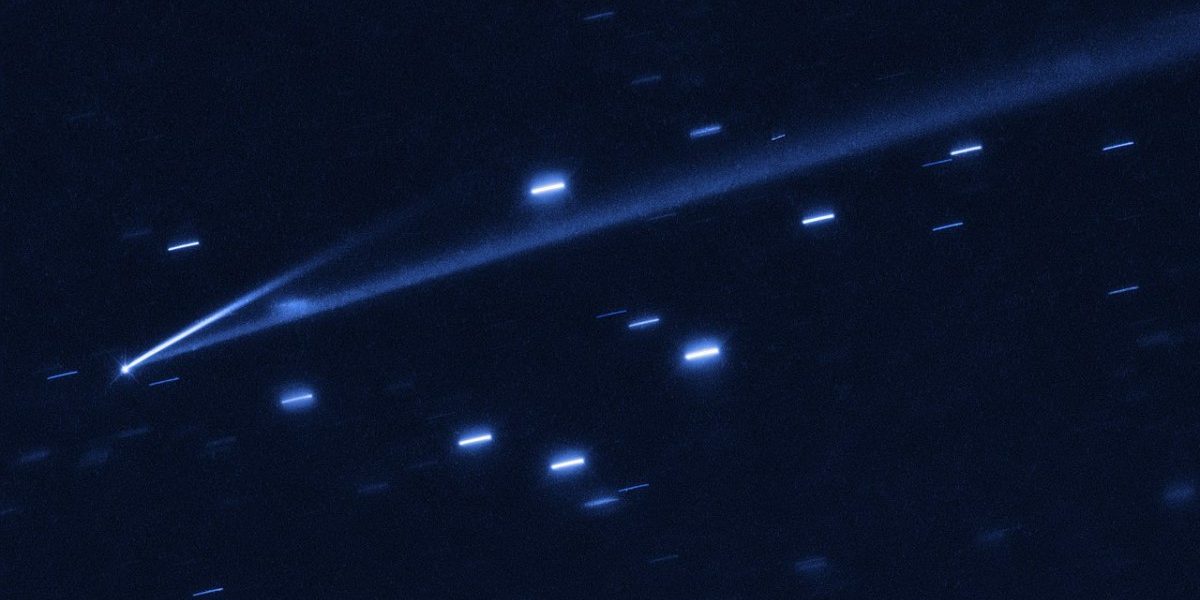 Using terrestrial and space-based telescopes, astronomers recently turned detectives to confirm an unprecedented discovery: an asteroid spinning so rapidly that it is literally coming apart at its seams. Telltale images of the asteroid Gault shot by NASA’s Hubble Space Telescope show two long ‘tails’ of dust trailing the space rock. These images, scientists say, are definitive proof that Gault is slowly breaking apart.

Asteroids don’t disintegrate often; the mechanics of those that do are still hazy for astronomers. Icy asteroids simply sublimate – change directly into water vapour – as they near the Sun and literally melt away. In the case of rocky asteroids like Gault, however, there are two ways they can disintegrate: two asteroids could slam into each faster than a bullet and pulverise themselves into dust or a roid could rotate so fast that it steadily loses its rocky mass and crumbles at some point. With the four-kilometre-wide Gault, scientists were not sure what was going on – until now.

Ever since it was discovered in 1988, Gault has been just another faint, stony asteroid in the main asteroid belt between Mars and Jupiter, which is home to over 800,000 known asteroids. In October 2018, sky-watchers saw a dramatic change in Gault’s lazy swing in its orbit: it had brightened all of a sudden. On closer study using NASA’s Asteroid Terrestrial-Impact Last Alert System (ATLAS) and the Panoramic Survey Telescope and Rapid Response System (PanSTARRS) telescopes in Hawaii, scientists were astonished to see that Gault had sprouted a thin dusty ‘tail’ that streamed out for hundreds of thousands of kilometres.

Also read: An Asteroid From Another Star System Just Zipped Past Our Sun

Most asteroids usually appear like tiny points of light and don’t have tails of dust trailing behind them. Tails are usually associated with comets when their orbits brigs them near the Sun. However, comets hail from the outer Solar System and are in Earth’s ‘neighbourhood’ when their eccentric orbits around the Sun bring them closer to us.

As they near the Sun, some of the ice on the comet’s surface vaporises and is ejected into space in a direction away from the Sun, visible as the tail.

However, scientists were in for a bigger surprise when, earlier this year, European and Canadian astronomers discovered a second debris tail behind Gault. Around the world, telescopes like the ATLAS in Hawaii along with the William Herschel Telescope in La Palma and the European Space Agency’s Optical Ground Station in Tenerife, Spain, turned in unison to focus on Gault. Indian scientists played a key role in working out the actual details of how Gault temporarily morphed into a ‘comet’. Astronomers at the Himalayan Chandra Telescope in Hanle, Ladakh, discovered that Gault had a rotation period of two hours – the critical speed at which asteroids usually start to break up.

So what makes Gault such an oddball asteroid? Did it have a close encounter of the roid-kind with other space rocks so that the collisions caused a sudden eruption of dust particles and produced the ‘tails’? But an asteroid impacting another would cause a big plume of dust to billow into space, and no such event was captured in any of the images taken by the Hubble space telescope since last September.

Astronomers are now more or less united in believing that the only way to explain Gault’s disintegration would be to consider the YORP effect. YORP is an acronym for ‘Yarkovsky-O’Keefe-Radzievskii-Paddack’, four scientists who promoted this theory in the 19th century. When heated unevenly by sunlight, infrared radiation from an asteroid’s surface escapes – along with some of its angular momentum. This creates a thermal torque or spin that causes the roid to rotate faster. As a result, the centrifugal force soon makes its surface unstable, sending dust and debris drifting into space.

Also read: Space Subjects That Will Get the World’s Attention in 2019 and Beyond

Active asteroids like Gault are uncommon and scientists have been able to catalogue barely 20 of them so far. But with advanced telescopes like the PanSTARRS, astronomers can now look more closely at the asteroid belt and spot active space rocks from the dust they leave in their wake. As for Gault, its spin to death is a grim reminder of the unpredictable behaviour of asteroids and the potential threat they hold for Planet Earth.

Look at the so-called “minor planets” of the main asteroid belt: they range in size from Ceres – at 950 km across, the largest – to small pebbles. Some of them have eccentric orbits that bring closer to the Sun than Mercury. Such peculiar orbits inevitably also bring them quite close to Earth. Hermes, a binary roid, holds the ‘nearest approach’ record among large asteroids. It zoomed past Earth at less than 643,600 km in 1937.

So knowing more about asteroids – especially active ones like Gault – and how to approach them could be useful one day if Earth is ever threatened by the ultimate cosmic horror story. For all we know, a runaway asteroid somewhere out there may have our fragile blue-green planet in its crosshairs as it careens through space.