This year’s prizes in the medicine category continue a longstanding tradition of being awarded to people who have also won the Lasker Award. 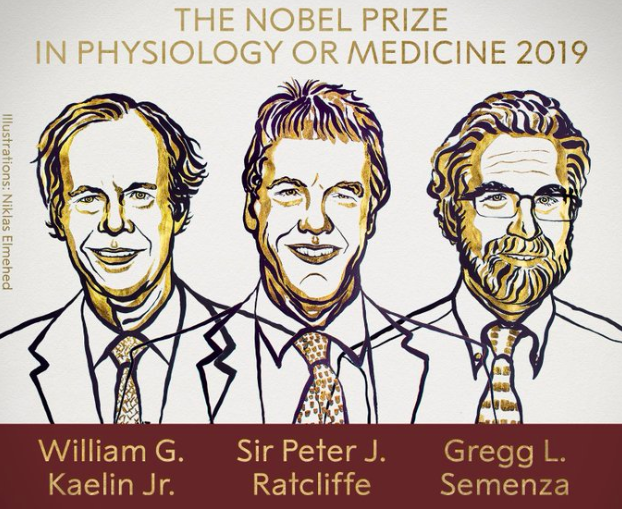 The Nobel Academy at the Karolinska Institute in Sweden has decided to award the 2019 Nobel Prize for physiology or medicine to William Kaelin, Jr., Peter J. Ratcliffe and Gregg Semenza for “their discoveries of of how cells sense and adapt to oxygen availability”.

A statement issued at at the Nobel Forum in Stockholm continued that this year’s prize is for “three physician scientists who found the molecular switch that regulates how our cells adapt when oxygen levels drop”.

This year’s prizes in the medicine category continue a longstanding tradition of being awarded to people who have also won the Lasker Award. All three men won the Albert Lasker Award for Basic Medical Research in 2016.

Their work concerns the hypoxic response, the body’s reaction to low-oxygen conditions. Cells need oxygen to function, and they also need to know how much oxygen there is so they can function efficiently. The hypoxic response triggers the formation of new blood vessels, new red-blood-cell formation, glycolysis, etc.

At high altitudes or when the body is anaemic, there’s low oxygen supply throughout the body. Scientists noticed that in this condition, the kidneys respond by expressing the erythropoietin hormone. More fundamentally, when oxygen levels go down, the expression of the erythropoietin gene (EPO) goes up.

Semenza found that the increase in EPO gene’s expression – triggering the release of erythropoietin hormone – was due to a part of its gene that he called the hypoxia response element (HRE).

Also read: What the Nobel Prizes Are Not

Working with the HRE, Semenza & co. produced a transcription factor protein complex, a set of two proteins that convert the part of the DNA to which this gene belongs to RNA. This complex was made of two proteins: ARNT and HIF-1α. ARNT was always present but HIF-1α is present is when oxygen supply is low and disappears when there’s too much oxygen.

In the same year – 1995 – Kaelin, Jr. and his team found that cells with copies of DNA that didn’t have a different gene, called the von Hippel-Lindau (VHL) gene, behaved as if their oxygen supply was low.

The first half of Ratcliffe’s achievement was to show, with his team, that without the VHL gene, cells couldn’t destroy the HIF-1α protein. Next, Ratcliffe and Kaelin, Jr. discovered that when oxygen supply was high, chemical reaction ensues that destroys HIF-1α proteins.

Specifically, when there is enough oxygen, hydroxyl ions (OH-) attach themselves to two parts of the HIF-1α protein. This modified HIF then catches the attention of proteins born of the VHL gene, which proceed to destroy the HIFs.

This link, between the amount of oxygen available and its connection to the reaction that destroys the HIF-1α proteins, is the body’s fundamental switch that helps it cope in low-oxygen conditions.

Also read: Can a Scientist Working in India Win a Science Nobel By 2035?

Because cells throughout the body consume oxygen to perform a variety of functions, any abnormalities in the switching mechanism can precipitate a corresponding variety of diseases ranging from those affecting how wounds heal all the way to cancer and stroke.

Axiomatically, scientists can treat many of these diseases using drugs that target different parts of the switching mechanism. For example, drugs that increase HIF can be used to treat anaemia and those that decrease HIF to treat some cancers.

So far, 219 people, including this year’s winners, have been awarded the medicine Nobel Prize since 1901. Only 12 of them have been women, and of them, only one has won the prize unshared (Barbara McClintock, 1983) in 39 instances.

The first woman to win the medicine Nobel Prize was Gerty Cori in 1947 and the last, Youyou Tu in 2015. No Indians have won the Nobel Prize in this category.