Madhava and the Uninfluential Discovery of Calculus

Despite references to discoveries being made in the early and mid-19th century, the reigning conception of India's mathematical history remained that there was nothing interesting after Bhaskara II some 700 years prior. Why? 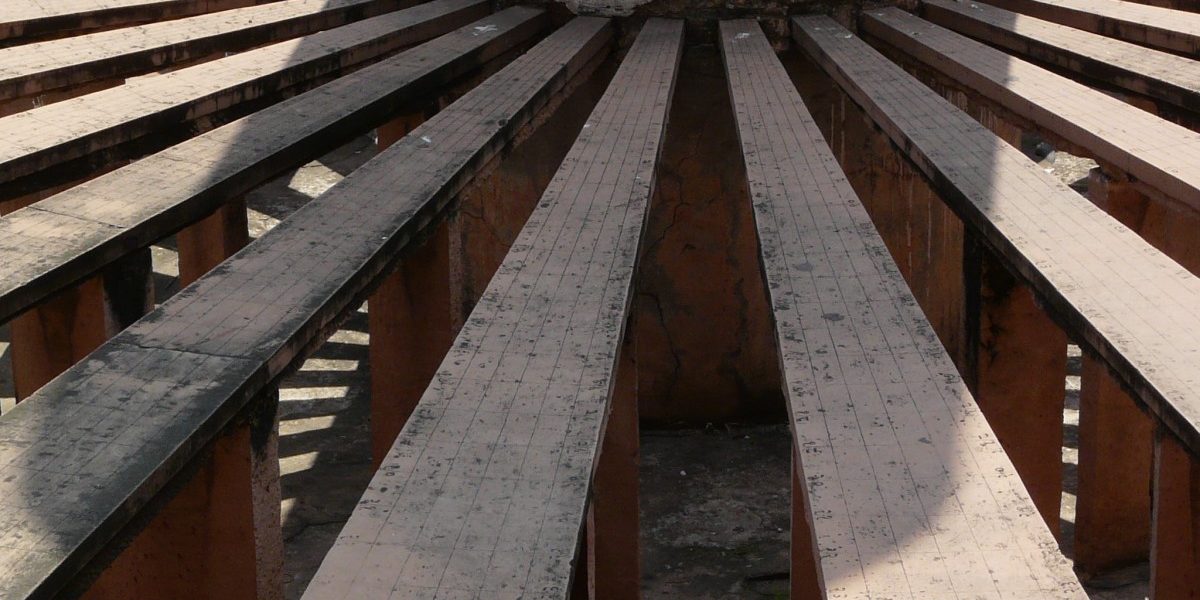 In the history of mathematics in India, one of the most fascinating institutions to exist was the guru-parampara or ‘chain of teachers’ of the Kerala School. This chain of teachers was founded by the mathematician and astronomer Madhava (also referred to as Sangamagrama Madhava, where Sangamagrama is his family or village name). Not a lot is known about Madhava’s actual life other than a few bare details – he was Brahmin and lived in modern-day Irinjalakuda (pronounced Ir-in-nya-la-ku-da) in Kerala during the late 14th and early 15th century.

Most of his work was lost in time and we only learned about his greatest discoveries through the references and commentaries in the work of his successors. In some of these surviving texts, he’s referred to as gola-vid, which means “one who knows the sphere” in Sanskrit. This evocative title comes from Madhava’s stunning discovery of the infinite series for circular and trigonometric functions. His discoveries are known today as the Madhava-Leibniz series for π/4 and the Madhava-Newton power series for the sine and cosine. These discoveries came two or three centuries before his European counterparts would ever put quill to parchment.

While the popular histories available to the average Indian might limit India’s contribution the idea of zero or the life of Aryabhata, Indian mathematics has a rich heritage. Kim Plofker, the author of Mathematics in India (2008), writes, “Hundreds of thousands of manuscripts in India and elsewhere attest to this tradition, and a few of its highlights – decimal place value numerals, the use of negative numbers, solutions to indeterminate equations, power series in the Kerala school – have become standard episodes in the story told by general histories of mathematics.”

Later in the same book, Plofker refers to Madhava’s work as the “crest-jewel” of the Kerala School. (For a better elaboration on the essence of Madhava’s discoveries than this author can manage, you can refer to Plofker’s book or read about the Madhava series.)

In the middle of the 20th century, the mathematicians C.T. Rajagopal and M.S. Rangachari began to publicise the discoveries of the Kerala School in academic circles.

Despite references to these discoveries being made in the early and mid-19th century by scholars like Charles Whish, the reigning conception of India’s mathematical history remained that there was nothing interesting after Bhaskara II in the 12th century. In his book Passage to Infinity: Medieval Indian Mathematics from Kerala and Its Impact (2009), G.G. Joseph, who has written extensively on the Kerala School, says,

“This fashion of ignoring these advances has persisted until even very recent times with no mention of the work of the Kerala School in Edwards’ text (1979) on the history of the calculus nor in articles on the history of infinite series by historians of mathematics such as Abeles (1993) and Fiegenbaum (1986). A possible reason for such puzzling standards in scholarship may have been the deeply entrenched Eurocentrism that accompanied European colonisation.”

Building on these statements of Eurocentrism, Joseph along with D. Almeida and other researchers began to look at something completely counterintuitive: the question of whether there had been any East to West cross-pollination of mathematical knowledge in the medieval era. They started to explore if it was possible that Western mathematicians developing calculus were influenced by their Indian counterparts from the Kerala School with Jesuit scholars that came with the Portuguese acting as the primary vector for this flow of knowledge from India to Europe. It was a radical proposal and no doubt, there were many who saw it as utterly misguided.

To cut a long story short, after a large research project studying correspondence, reports and other documents related to Jesuit missionaries, no evidence was found for any translation or transmission of anything more the most superficial scientific knowledge. As Joseph writes in his review of Passage to Infinity, “It is hard to help feeling disappointed that this hypothesis ultimately came to nothing.” But at the same time, maybe this null result is something to be celebrated.

It is easy to forget that a researcher proposing a radical hypothesis, only to disprove it after years of study, is doing scientific inquiry exactly as it should be done. The fact that we are plagued by the opposite – the current practice of research projects having to somehow convince grant-givers of their results beforehand – is a symptom of how broken our knowledge production system has become.

Also, this situation offers us the opportunity to ponder the idea of the uninfluential discovery. Calculus in the West almost definitely came about in complete ignorance of Madhava’s findings. There are numerous documents in Europe that attest to the sequential development of ideas relating to infinitesimal calculus whilst there is a complete absence of any recorded mention of the Kerala School. But does this reduce the value of Madhava’s discovery? Only if you were applying some shallow utilitarian logic.

It would be an impoverished viewpoint that reduced the history of science to a game of winners and losers, with the winners being those who contributed to the Enlightenment or the Industrial Revolution. While undoubtedly narratives of knowledge transmission from East to West would be a welcome palliative to Eurocentrism, an equally valid palliative would be to celebrate these histories without feeling the need to couple their value to European progress.

It is actually quite heartening to ponder how a society and culture with such different proclivities from Europe could’ve arrived at the same mathematical truths. It implies a world where multiple systems of knowledge and plural philosophies could be used to discover the same secrets of the world. That sounds good to me.

This article was originally published on 3 Quarks Daily and has been republished here with permission.