The Graceful, and Graceless, Pursuits of Peace in the Quantum World

There is a fragility among quantum states that makes mathematical order easier to summon out of the chaos of reality, in a way that gravity never aspires to in its stabler demesne. 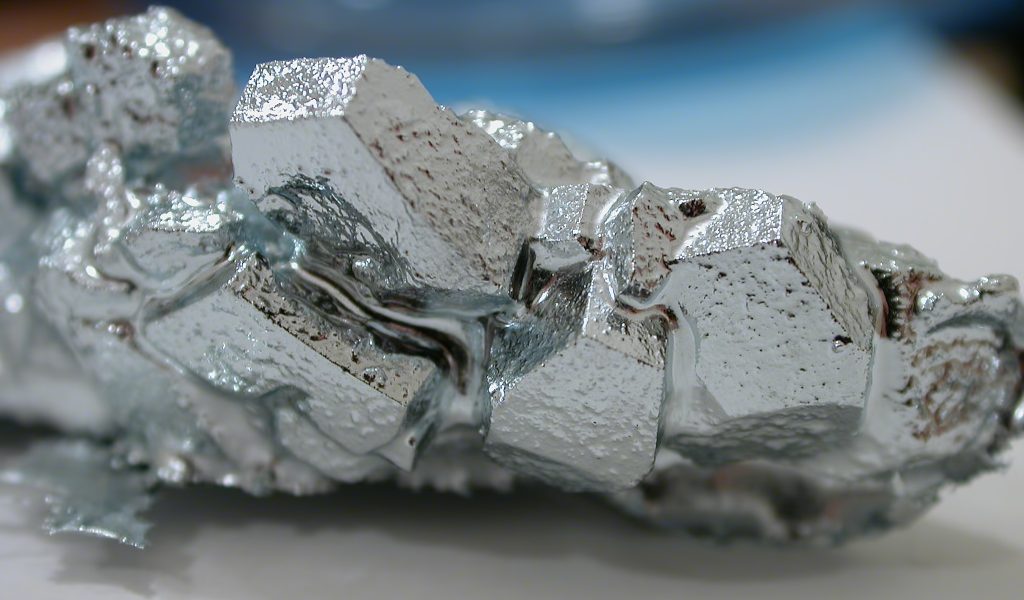 Bengaluru: A wide swath of fundamental physics and chemistry is defined by the pursuit of the ground state. Since we began elucidating the structure of the atom in the 1910s, much of what we know about how particles, quasiparticles and molecules behave can be described by a desire among each of these entities to lose all the energy that they can in the given circumstances and simply exist with the bare minimum. This is why the ground state is both an illuminating and fascinating object of study: the former because it is what particles are always tending towards and the latter because it is the ultimate destiny of the ergic constituents of our world, symbolising a kind of particulate amor fati. The ground state is the home to which all matter seeks to return; by studying the home and the forces that keep it, we can explain to a large extent the nature of the things that want to return there.

For example, the electrons around an atomic nucleus are forbidden from occupying the same… the same what? “Might I suggest an analogy?” Raman butts in. “Electrons are like home-owners: they may live in the same town, or even on the same street, but no two electrons live together. That is the exclusion principle.” And all the electrons in an atom are concentric vis-a-vis the atomic nucleus. By asking why they would do this when they could all simply journey around the nucleus in an orbit that affords them the lowest energy possible, we come upon the work of Wolfgang Pauli, Paul Dirac, Enrico Fermi, among others. By wondering if other particles in other systems are subjugated similarly, we come upon the work of Satyendra Nath Bose and Albert Einstein, among others.

Why, fast-forward to 2011, when the Higgs boson was discovered because the unstable amount of energy it embodied ‘decayed’ into clumps of lighter, long-lived and so more observable particles. If particles didn’t behave this way, the Large Hadron Collider would be completely useless – nor would we have had last week’s exciting blazar neutrino discovery.

A choice example from the realm of physics is the superconductor, which – as we all know – is a material that can conduct an electric current with zero resistance. One way to explain this phenomenon is by taking recourse through BCS theory, which imagines the electrons in a superconductor to have joined up in specific circumstances to form so-called Cooper pairs, effectively getting transformed from being fermions of higher energy to bosons of lower energy. And bosons are exempt from Pauli’s exclusion principle, free to form a phase of matter called the condensate at low temperatures. This condensate sea of electrons is what conducts the electricity. “This, incidentally, is a good example of finding the right ground state,” Raman said.

Superconductors are comparable to time crystals, a hypothetical crystal whose particulate constituents would be in motion in their ground state. The principle difference between them is that time crystals exhibit the spontaneous breaking of time-translation symmetry (as explained here), whereas superconductors don’t. However, superconductors are still cooler – not least for their befuddling variety and their involvement in kooky experiments to uncover anomalous quantum effects and ‘artificial’ particles.

Unfortunately, all these materials and their properties are very difficult to engineer and then observe in action. In most cases, the observation itself consists of watching numbers on a screen or reading pre-recorded data. Compare this to how exciting it would be to observe an object oscillating between either sides of its ground state in a classical setting. Of course, this also would be hard to engineer because the object would have to act against gravity, which takes a lot of work, which in turn takes a lot of energy (think of Newton’s cradle). Perhaps it can be made to work if we went just a little smaller, unto a scale where the object is heavy enough to be affected by gravity but also light enough to be affected by one of the other fundamental forces, preferably in the form of a controllable electrochemical reaction.

This is somewhat the case with the mercury heartbeat experiment. Place a drop of mercury in a small pool of acid with an iron nail at a short distance from the drop. The acid strips off electrons from the mercury atoms it comes in contact with, ionising them and forcing them to repel each other. This causes the mercury drop to flatten out – and make contact with the iron nail. The nail has enough negative electrochemical potential, i.e. functions as an anode, to deionise the mercury atoms and cause them to pull themselves together again thanks to surface tension. As a result, the drop de-flattens into a sphere-like shape, loses contact with the iron nail and starts the cycle all over again.

Last week, scientists from China announced that they’d done something similar with liquid gallium – but with more interesting effect. They filled a petri dish with sodium hydroxide, placed 50-150 microlitres of liquid gallium at its centre and then set up a graphite fence around it. The fence would act like the nail in the mercury experiment if it was positively charged with a DC current. When the dish was tilted slightly, the gallium flowed down towards the fence and came in contact. Its surface became electrified, i.e. gallium atoms lost electrons to become ions, and the surface tension vanished. As the drop spread out over the incline for more of it to come in contact with the fence, the amount of electrification also increased, eventually causing the liquid and the fence to repel each other so much that the former moved back up the incline – cutting contact, reacting with the base to regain electrons, restoring surface tension and flowing back down the incline.

It is an abusive relationship. The liquid gallium is forced to oscillate between being a droplet at the centre of the dish and being a pancake in contact with the fence, whereas all it would like to do is not have the incline and just lounge on its basic bed. Sadly, it is not going to have its paradise anytime soon because the Chinese team found that the gallium’s ‘heartbeat’ movement up and down the incline could be controlled by the amount of DC current supplied – whereas the mercury’s ‘heartbeat’ throb couldn’t be controlled by the iron nail. In their paper, the Chinese group writes,

A comparatively special feature of the gallium-based liquid oscillator is that the electrochemistry allows the beating to be activated or deactivated just using an applied DC voltage. … Without the applied voltage, the drop docks with the inner side of the electrode due to the electrode inclination. The voltage causes the drop to self-actuate and a stable periodic motion is obtained soon afterward. … The oscillations stop after the voltage is removed. The motion can end abruptly; although in some cases, slower irregular beats persist for a few more cycles after the voltage is removed, indicating stored charges on the drop. Despite some background mechanical vibrations in the apparatus, the liquid metal itself shows a behaviour that is self-correcting and self-regulating, governed by a well-defined characteristic frequency… This indicates that the phenomena occur at a steady-state frequency that is relatively robust against mechanical perturbations.

Numerous reports (listed below) have appeared on the web discussing the potential of this gallium pulse to power robot muscles of the future – which is to reduce the quasi-sublime beauty of what is happening here to the pithiness of a battery, and move on. But don’t move on just yet. 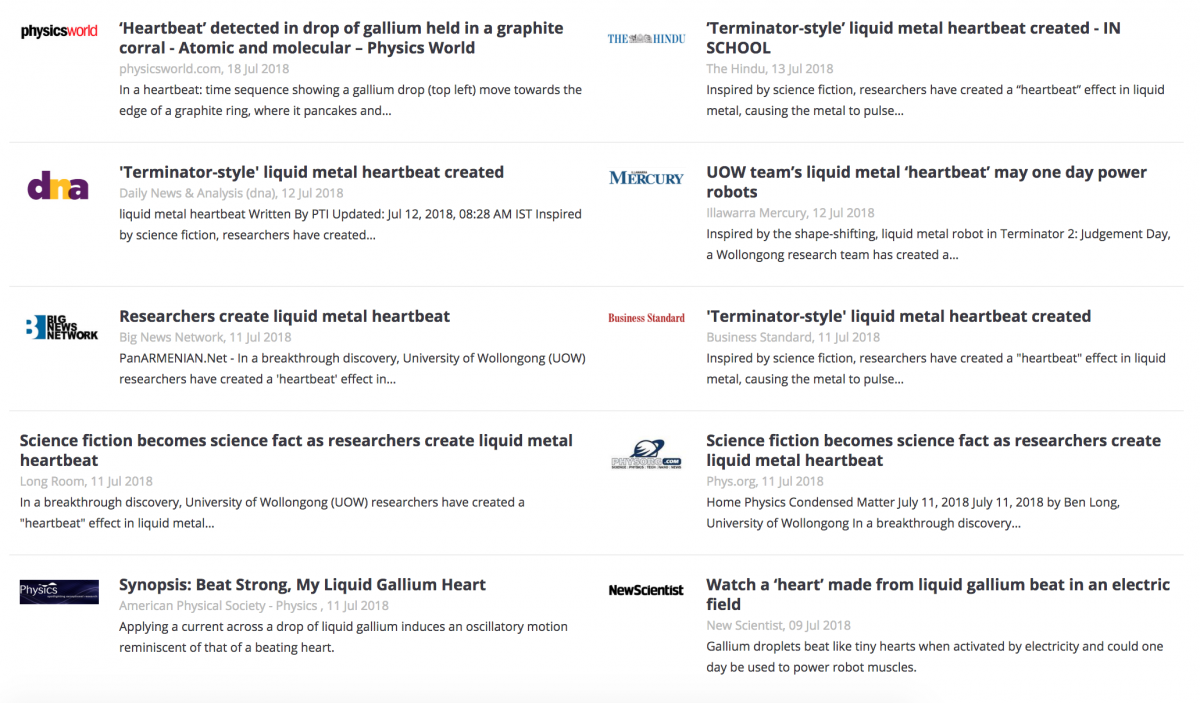 The transmission of forces and the progression of a phenomenon happens faster in the quantum realm than in the classical one. Moreover, the phenomena also seem ‘cleaner’ in that there is no arbitrary, anthropogenic intervention apart from the preservation of certain state variables. For example, maintaining a cryogenic temperature is necessary for a superconductor to come to life – but the performance of superconductivity does not demand continuous human intervention in the form of, say, an iron nail or an electrified graphite fence.

Of course, superconductors are a cherry-picked example, possibly even a flawed one because the line between human intervention and the need to preserve a functionally conducive environment vanishes completely in many other examples. One is the discovery last year of Majorana modes in a topological superconductor: the material in question does not exist in nature, is almost impossible to create by accident and can only be built by an intelligent species. Given this, did the scientists discover the Majorana modes or did they invent them?

Classical examples, on the other hand, don’t present such conundra, at least not as often as their quantum counterparts do. It is easier when gravity lords over the other fundamental forces to tell apart natural occurrences from synthesised ones – just as easily as one can differentiate between greatness and transcendentalism. To illustrate how, consider two objects that behave strangely at or near their ground states: the Cooper pairs condensate and the liquid gallium/sodium hydroxide/graphite ensemble. The condensate has zero viscosity and can keep flowing forever. There is here a deeper alteration of the substance’s nature, so much so that the essence of the sum is not the essence of its parts. But this is not so with liquid gallium, which in comparison is dramatic prose but prosaic nonetheless.

The implicit inferiority of the gallium and mercury examples is further borne out by the introduction of an incline and a nail. The petri dish had to be inclined at some angle to kickstart the experiment, the nail had to positioned at a short distance from the droplet to jumpstart the throbbing. Such considerations are arbitrary – and they’re arbitrary because their precision is inconsequential. Perhaps the petri dish could be tilted at 45º if enough current is supplied to the graphite corral. Perhaps the iron nail could be placed 10 cm away from the mercury if there is enough mercury and enough electrolyte. However, a superconductor just won’t superconduct above its critical temperature, no matter how many electrons are available or what the shape of the material is.

There is a fragility that makes mathematical order easier to summon, and behold, out of the chaos of reality, a sort of principled existence that draws sharper lines between ground states and excited states in a way that gravity never aspires to in its stabler demesne. This is certainly one reason why we choose to be interested in quantum mechanics even as we keep our didactic metaphors in the classical domain. The quantum offers the asymptotically perfect realisation of natural beauty and the classical offers a crude grammar to translate between physics and aesthetics. The ground state, of course, is the pursuit that unites them both.