Review: A Fine Profile of J.B.S. Haldane as Scientist and Scientific Socialist

In a new biography, Samanth Subramanian attempts to make sense of a complex personality by seizing upon Haldane's "greatest moral crisis", one where science and politics collided head on. 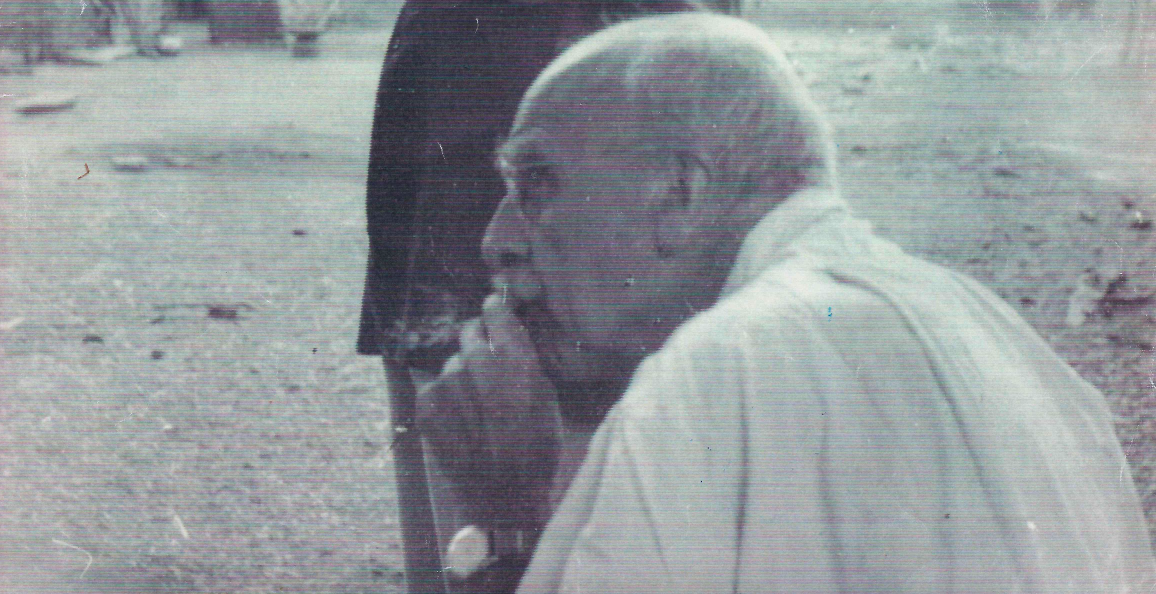 John Burdon Sanderson Haldane (1892-1964) is today best remembered as one of the founders of population genetics, which married Charles Darwin’s and Alfred Russell Wallace’s ideas of natural selection with Mendelian genetics using the language of statistics. His other scientific contributions spanned the fields of physiology, biochemistry, and medical genetics – contributions that the evolutionary biologist John Maynard Smith once said would “satisfy half a dozen ordinary mortals”.

Haldane was also the most brilliant populariser of science of his generation, writing and speaking tirelessly about science and its role in society. A committed Marxist and anti-imperialist, Haldane believed that science and socialism went hand-in-hand, that they were our best means to improve society.

In A Dominant Character, his new biography of Haldane (out in India on December 10, 2019), Samanth Subramanian attempts to make sense of such a complex personality by seizing upon Haldane’s “greatest moral crisis”, one where science and politics collided head on. This was Haldane’s response to the infamous Lysenko affair of 1948, where within a span of just one week, the Soviet Union turned its back on genetics and evolutionary biology.

Trofim Lysenko was an agronomist who viewed biology through the lens of dialectical Marxism. Darwin and Wallace’s ideas of evolution were true, but placed far too much emphasis on notions of ‘competition’ and a ‘struggle for resources’. These ideas smacked of capitalism to Lysenko, who believed that environmental conditions played a dominant role in shaping organisms. He found support for his ideas in a process called vernalisation, and believed it could cure Russia’s food problems.

Vernalisation is the process by which certain plants accelerate their flowering in response to prolonged cold conditions. Seeds develop in both winter and spring, and two crop seasons become possible.

Trofim Lysenko at the Kremlin in 1935. At the back (L-R) are Stanislav Kosior, Anastas Mikoyan, Andrei Andreev and Joseph Stalin. Photo: Wikimedia Commons

But despite the lack of experimental proof, Lysenko went a step further and said plants could inherit such environmental influences. Speaking at the conference of the Lenin All-Union Academy of Agricultural Sciences in July 1948, of which Lysenko happened to be president, he raged about how the West was corrupting biology using genetics and that Soviet scientists had to step in and wage an ideological and scientific battle. Lysenko was a close confidant of Stalin, so the rest of the conference saw biologists line up quickly to adopt this stance. Those standing up for science were ostracised, soon sent to gulags or purged.

Four months later, the BBC invited Haldane and three other biologists – Sydney Harland, C.D. Darlington and Ronald A. Fisher – to comment on this tragic affair. All were roundly critical of Lysenko’s science as well as of how he’d drummed out contrarian voices. Haldane, however, equivocated saying he needed more accurate information, and that science in capitalist societies was ideological as well, that it had its fair share of problems.

Haldane was at the height of his popularity at this time, and in prior essays had even criticised Lysenko for his less-than-rigorous science. But his tepid response to BBC discredited Haldane in the eyes of his fellow scientists, as well as in the public. His sister Naomi Mitchison wrote, “My brother is getting into a tangle, and has made a great many enemies.” Even his devoted student and biographer Krishna Dronamraju called it “disappointing”. 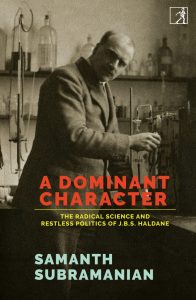 The rest of Subramanian’s biography attempts to understand this dichotomy in Haldane – a stickler for scientific method and truth, unafraid of speaking his mind, but who at times succumbed to political ideologies with shaky foundations.

Subramanian begins by jumping back in time to Haldane’s childhood. Haldane was born to an aristocratic family in 1892. His father, John Scott Haldane, was a noted respiratory physiologist and liberal, and his mother Louisa Trotter, a fiercely independent woman who was also staunchly imperialist. Haldane, Sr. studied the effects of ether, how gases regulated haemoglobin function and what caused pulmonary diseases like silicosis. A famous self-experimenter, he would lock himself in sealed chambers breathing different gas mixtures to record their effects.

Haldane Sr. took his science out into the world to help fix society’s ills. He investigated various mine disasters, noxious gases in sewers, studying what caused the ‘bends’ during diving, how victims of gas warfare could be treated, etc. He wasn’t averse to using his son as an experimental guinea-pig on occasion either.

Subramanian delights in describing these in ghastly detail, although it becomes clear to the reader how they inspired a love of science and experimentation in J.B.S. Haldane. Subramanian also shows how travels with Haldane, Sr., which exposed Haldane Jr. to the conditions of the poorer classes, sowed the seeds for his politics by dissuading him from notions that the poor were inherently inferior. The author also mentions how Haldane’s mother and sister influenced his views on religion, and how they supported him during troubles at Eton.

Haldane majored in the classics at Eton, and like others of the time, was sucked into the maelstrom of World War I. In fact, he ended up writing his first paper, on genetic linkage based on experiments with Naomi Mitchison and Alexander Sprunt, in the trenches of the western front.

Unlike previous biographers, Subramanian does an admirable job describing Haldane’s life at this time – his daredevilry and love of throwing grenades despite abhorring war, and how his military experiences in Iraq and India shaped his worldview.

Also read: The Scientist as Rebel in the Indian Cultural Milieu

Haldane returned from World War I and plunged into biochemistry, using mathematics to describe how enzymes worked, even writing the first textbook on enzymes. He then turned to evolutionary biology, using mathematics to reconcile it with Mendelian genetics. His work on how genes spread, how the peppered moth variant evolved, why harmful mutations like those underlying sickle-cell anaemia persisted and in establishing genetic maps for haemophilia and colour-blindness remain classics. Subramanian is also an able science communicator, especially since Haldane worked long before we had any idea what an enzyme or a gene were in physical terms.

The one criticism that can be levelled here is that the book omits some of the scientific responses to Haldane’s work, such as Ernst Mayr’s critique of ‘beanbag genetics’. 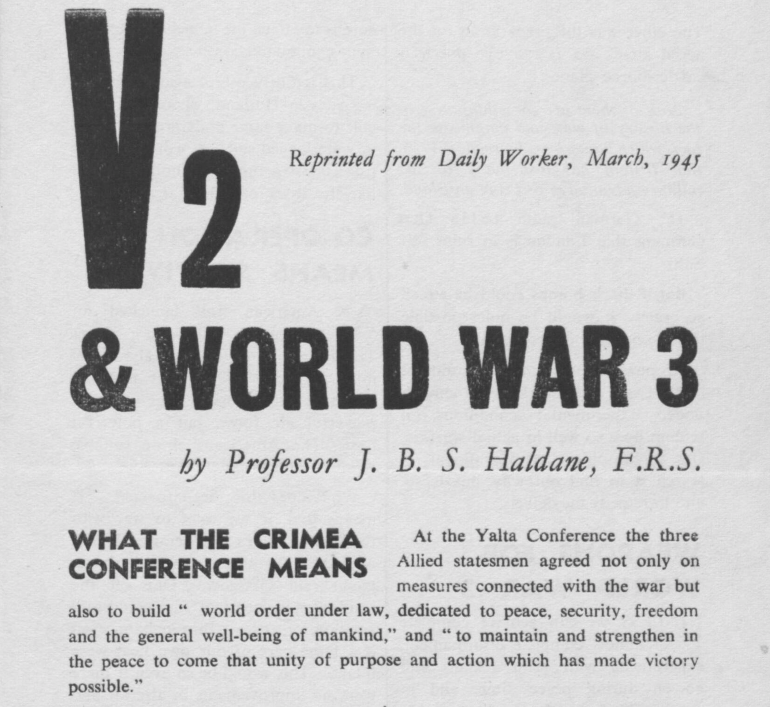 The opening of one of J.B.S. Haldane’s articles as reprinted from The Daily Worker. Photo: Haldane Papers/Wellcome Library, CC BY 4.0

The 1920s and 1930s were also when Haldane developed as a science communicator himself, and an evangelist par excellence. His books, in particular Daedalus (1924), and columns for The Daily Worker were to blame. Subramanian details Haldane’s revolutionary ideas, how he advocated a ‘scientific socialism’ and, contrary to others of his time, a mild form of ‘positive eugenics’. Subramanian doesn’t hold his punches here. For his rigorous and often pedantic attitude when it came to science, Haldane used sloppy analogies and cherry-picked facts to support his political ideology.

(Despite this, the reader will be well served to dip into some of the classic essays, which even now are shining examples of science writing done right.)

Haldane’s move towards the Left and radical politics was more gradual, accelerating after the fallout of his (then) scandalous affair and marriage to Charlotte Burghes, who was already married. His experiences in the Spanish Civil War, the economic conditions of the 1930s and later marital troubles soon rendered him a committed Communist. The book details this slow conversion, using columns he wrote for The Daily Worker to show his political development. The fallout of the Lysenko affair and internal Communist party politics eventually brought this to an end, with Haldane letting his membership lapse sometime in the 1950s. There is not much new to be said here, although Subramanian must be commended for laying to rest any notion that Haldane spied for the Soviets.

Haldane’s disillusion with imperialist Great Britain, on the other hand, was of far greater consequence. The last straw was the kingdom’s participation in the tripartite invasion of Egypt in 1952. Haldane and his second wife, the geneticist Helen Spurway, moved to India in protest, where they attempted to study the genetics of various native species while training a new generation of geneticists. Haldane breathed his last at the age of 72, after a long battle with bowel cancer, in Bhubaneswar.

Could he have continued to influence ‘modern biology’ that was being birthed in the West at this time?

Subramanian ends his fine biography with what this reviewer sees as an exhortation to current day scientists. Haldane was a scientist first but soon realised that communicating science was equally important. He never hesitated to voice his concerns about science or society, even if it landed him in trouble. Given the state of the world today, taking a leaf out of this part of Haldane’s book should serve us all well.

T.N. Avinash trained as a biochemist but is now more fascinated with history, and the history of science.