Infinite in All Directions: Sokal Squared, Sex and Gender, Life as a Jellyfish

It has escaped mainstream attention that the Sokal Squared hoax, perpetrated by three research researchers to expose what they claim is the absurdity of gender studies, chiefly targets research that explores race. 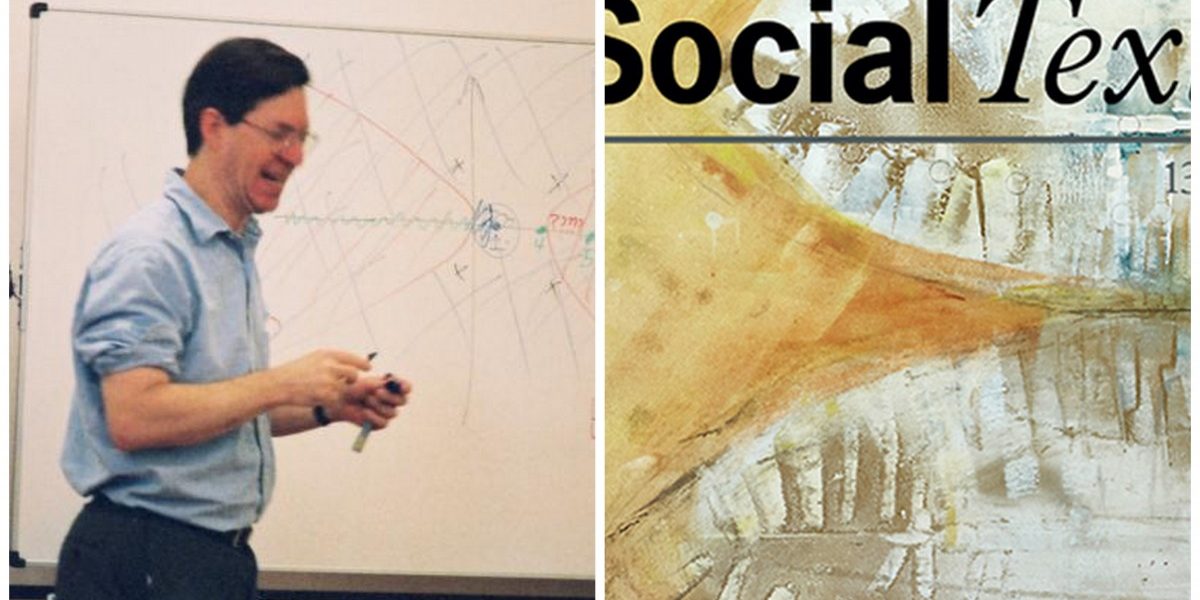 Alan Sokal, the mathematician who perpetrated the famous hoax against Social Text (right), a journal of postmodern studies. Sources: University of Vienna (Sokal) and Social Text

Go where science takes you, even if it is infinite in all directions. Subscribe to the newsletter format here and get this column in your inbox every Saturday morning.

You can’t have all news items on the homepage all the time even though they might each deserve that place, nor can a single publication cover all the notable news in the world on a given day. But if given the chance, these are the stories I would have liked to showcase on my hypothetical homepage November 2 morning:

* World’s oceans could be way warmer than we thought

Science is frequently understood as an enterprise engaged in the unearthing of new facts, or verification of older, supposed facts, through methods that strive to eliminate biases. Missing in this picture is the key role of interpretation itself: science lies in its facts but also in how those facts are interpreted together in various contexts. In turn, this requires us to view science as a knowledge-building enterprise for all of society, beyond just for a group of specialists.

* Anyone notice the Sokal Squared hoax attempts to dismiss race studies? – “By now we have all read too many summaries, critiques and defenses of the so-called Sokal-squared hoax perpetrated by a trio of self-declared liberal humanists who published some faux journal papers to unmask what they see as the absurdity of ‘grievance studies’. …Concerns with race, however, pervade the trio’s work. In their mainstream reveal piece, they take aim at progressive stacking with puerile pranks, they jokingly rewrite Hitler’s Mein Kampf, they specify as among their targets ‘critical whiteness theory’ and they have specifically mentioned ‘white fragility’ – linking to Robin DiAngelo’s seminal article on the topic.”

(For more about the original Sokal hoax, try this backgrounder + analysis by Steven Weinberg, the celebrated physicist.)

* Report blames humanity for 60% of animal populations loss but forgets to name capitalism – “The latest Living Planet report from the WWF makes for grim reading: a 60% decline in wild animal populations since 1970, collapsing ecosystems, and a distinct possibility that the human species will not be far behind. …[I]n the 148-page report, the word ‘humanity’ appears 14 times, and ‘consumption’ an impressive 54 times. There is one word, however, that fails to make a single appearance: capitalism. … By obscuring capitalism with a term that is merely one of its symptoms – ‘consumption’ – [it risks shifting the] responsibility for species loss onto individual lifestyle choices, while larger and more powerful [institutions] that are compelling individuals to consume are, worryingly, let off the hook.”

“Activists” don’t have to demonstrate that the disparity is entirely caused by bias, only that bias exists, because even small biases will have large, amplified effects in scientific careers for many people. /16

Piecing together stories published at disparate times and places but which have a theme or two in common.

Over 1,600 scientists have signed a letter of protest addressed to the White House against its proposed definition of ‘gender’ that purportedly disidentifies transgender and intersex people. According to a press statement issued alongside the letter,

The letter was a grassroots effort. Immediately following the publication of the New York Times article about the administration’s proposal, with its “grounded in science” claim, scientists began voicing their objections on social media. Twenty-two biologists and other scientists in related fields planned and wrote the letter collaboratively.

The letter asks for the administration to withdraw the draft policy and for the petitioners’ “elected representatives to oppose its implementation”. It has been signed by over 1,600 people working as “biologists, geneticists, psychologists, anthropologists, physicians, neuroscientists, social scientists, biochemists, mental health service providers,” and scientists in other fields.

However, subject expertise has little role to play in the context of the letter, and certainly shouldn’t let the Trump administration off the hook simply because it believes only ‘scientific things’ are entitled to legal protection.

If technical expertise were really necessary to disabuse the Trump administration of its misbelief that gender is a biological construct, the experts at the forefront should have included those qualified to comment meaningfully on how people build and negotiate gender. But even this wouldn’t save the letter from its principal problem: it seems to be almost exclusively offended by the Trump administration’s use of the phrase “grounded in science” over anything else, and devotes three paragraphs underlining the lack of empirical knowledge on this count. This is problematic.

In transgender individuals, the existence and validity of a distinct gender identity is supported by a number of neuroanatomical studies. Though scientists are just beginning to understand the biological basis of gender identity, it is clear that many factors, known and unknown, mediate the complex links between identity, genes, and anatomy.

In intersex people, their genitalia, as well as their various secondary sexual characteristics, can differ from what clinicians would predict from their sex chromosomes. In fact, some people will live their entire lives without ever knowing that they are intersex. The proposed policy will force many intersex people to be legally classified in ways that erase their intersex status and identity, as well as lead to more medically unnecessary and risky surgeries at birth. Such non-consensual gender assignment and surgeries result in increased health risks in adulthood and violate intersex people’s right to self-determination.

Millions of Americans identify as transgender or gender non-conforming, or have intersex bodies, and are at increased risk of physical and mental health disorders resulting from discrimination, fear for personal safety, and family and societal rejection. Multiple standards of health care for transgender and intersex people emphasise that recognising an individual’s self-identified gender, not their external genitalia or chromosomes, is the best practice for providing evidence-based, effective, and lifesaving care. Our best available evidence shows that affirmation of gender identity is paramount to the survival, health, and livelihood of transgender and intersex people.

A socio-cultural description of some of the ways in which Americans interpret gender, the challenges they may face and what they believe could be the appropriate way to address them are all conspicuous by absence. People are not rallying to this cause because science doesn’t yet know; that would be disingenuous. Instead, they are speaking up because the cultural experience of gender is missing from the White House’s articulation.

Finally, more than following Trump’s draft policy into its hole of cultural elision, the letter itself seems to fail to distinguish between sex and gender. It says:

The relationship between sex chromosomes, genitalia, and gender identity is complex, and not fully understood. There are no genetic tests that can unambiguously determine gender, or even sex.

The relationship between sex chromosomes and genitalia is much better understood than the relationship between the two and gender identity. Further, sex, being entirely biological, can indeed be determined to a large extent by genetic tests. It is gender that is harder to associate with one’s genes because it is a social/cultural/political construct and genes aren’t its sole determinants.

In transgender individuals, the existence and validity of a distinct gender identity is supported by a number of neuroanatomical studies.

It is doubtful if these studies demonstrate causation together with correlation.

Notwithstanding the legal protections afforded to people of non-binary gender and the terms of their provision, the letter would have benefited by calling the policy out for framing it as an insular problem of science, not putting up an equally insular counter-argument and by being more wary of the language it employs to defend its stance. Specialised expertise is important but it is not everything.

Sciencey things people are trying to do that are out of the ordinary in some way.

* How the immortal jellyfish helps me rewrite my queer childhood – “The immortal jellyfish has no brain or heart. Everything it consumes and extrudes passes through a single orifice (an anus, to be precise.) It does not long for anything. It never feels out of place. It does not understand that it could live forever, just as it has no conception that one day it will probably die. In my eyes, it makes total sense that immortality could only ever exist within the bounds of a brainless life. If anything intelligent was ever given a second chance at adolescence, it may never choose to grow up.”

* Psychology review tries to explain why schadenfreude exists – The “common, yet poorly understood, emotion” of schadenfreude “may provide a valuable window into the darker side of humanity,” according to a review of studies by psychologists at Emory University that draws “upon evidence from three decades of social, developmental, personality and clinical research … The authors propose that schadenfreude comprises three separable but interrelated subforms – aggression, rivalry and justice – which have distinct developmental origins and personality correlates. They also singled out a commonality underlying these subforms”: dehumanisation.

Some interesting articles from around the web.

* Scientists point out ‘blatant’ anti-nuclear bias in latest IPCC report – “Some of the scientists most often cited by the Intergovernmental Panel on Climate Change (IPCC) have taken the unusual step of warning leaders of G-20 nations that a recent IPCC report uses a double standard when it comes to its treatment of nuclear as compared to renewables. … The letter signers include leading radiation experts who expressed outrage that the IPCC had claimed a link between nuclear power stations and leukaemia when in reality ‘there is no valid evidentiary support for it and the supposed connection has been thoroughly dismissed in the literature.'”

* Algorithm identifies best phosphor for use in LEDs from giant list in a minute – “A machine learning algorithm that can swiftly identify the most desirable LED phosphor host compound out of a database of almost 120,000 materials has been developed by researchers in the US. Efficient enough to run on a PC, the program was created by Jakoah Brgoch and colleagues at the University of Houston and has predicted the relevant properties of a highly efficient, thermally stable compound in well under a minute. The team’s algorithm could soon be used to speed up the discovery of new materials for use in commercially competitive LEDs.” Paper describing algorithm here.