Infinite in All Directions: A Lithium Habit, Death's Meaning and DNA Clues

Scientists unearthed the presence of three large ivory cartels in Africa based on DNA analysis of elephant tusks. 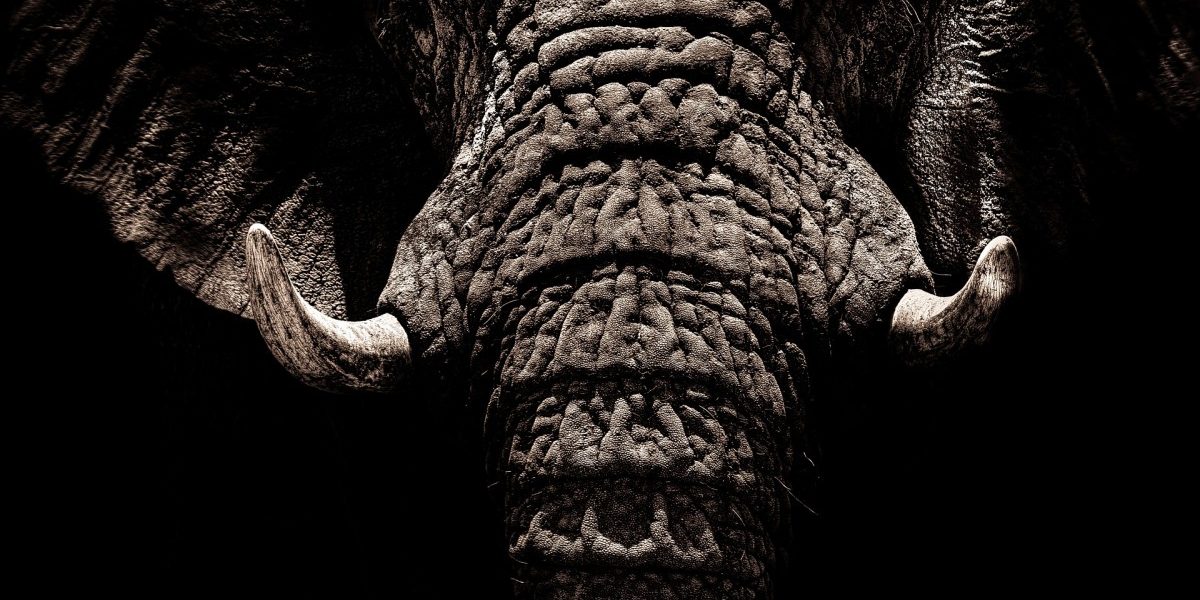 A curated column of sciencey interestingness. Subscribe to the newsletter format here and get this column in your inbox every Saturday morning.

You can’t have all news items on the homepage all the time even though they might each deserve that place, nor can a single publication cover all the notable news in the world on a given day. But if given the chance, these are the stories I would have liked to showcase on my hypothetical homepage September 21 morning:

* Hoppers on Ryugu – On September 21, the Japanese Space Agency’s Hayabusa 2 craft deployed two seven-inch rovers that will hop around Ryugu, an asteroid 3,000 feet wide and orbiting the Sun. The two devices will study the asteroid’s surface characteristics. In the next year, Hayabusa 2 will deploy two slightly larger landers that will collect samples of the rock, return to the craft, which will then return to Earth by the end of 2020. By studying the composition of Ryugu in greater detail, scientists hope to find out if asteroids could have ferried organic molecules from other parts of space into the Solar System.

* Skewed cancer drug trials – A ProPublica investigation has found that though African-Americans make up over 13% of the population of the United States, they make up only around 5% of subjects enrolled in clinical trials for cancer drugs. What’s worse, the underrepresentation persists “even when the treatment is aimed at a type of cancer that disproportionately affects them”. ProPublica found the problem also extends to Asians, Native Americans and Alaska Natives, and does not include Hispanics only because their data isn’t available.

* University bills students for lab water – In an effort to drive up revenue to help fund new research projects and climb national and global university rankings, the School of Life Sciences at the University of Hyderabad has decided to bill its students and teachers for ultra-pure water user for experiments in the lab. While this in fact maybe okay to do, it is bizarre that the university wants students to pay out of their pockets instead of via grant/fellowship money. There are also plans to begin charging occupants of the students hostel for water and electricity.

* A lithium battery addiction problem – Earth’s clean energy future depends significantly on availing and using lithium-based energy storage devices. However, this alkali metal brings environmental damage of its own. According to Wired, “In May 2016, hundreds of protestors threw dead fish onto the streets of Tagong, a town on the eastern edge of the Tibetan plateau. They had plucked them from the waters of the Liqi river, where a toxic chemical leak from the Ganzizhou Rongda Lithium mine had wreaked havoc with the local ecosystem.”

Science is frequently understood as an enterprise engaged in the unearthing of new facts, or verification of older, supposed facts, through methods that strive to eliminate biases. Missing in this picture is the key role of interpretation itself: science lies in its facts but also in how those facts are interpreted together in various contexts. In turn, this requires us to view science as a knowledge-building enterprise for all of society, beyond just for a group of specialists.

* Bioinformatics to the masses – “How … do we bring bioinformatics to the scientific masses? The answer is complex, is multifaceted, and likely involves major changes to the way we train students. As genetic data become all the more ubiquitous in research and healthcare, there are already heated debates about the cost, usability, and availability of bioinformatics and its spoils. Those with first‐class bioinformatics skills will be sought after, and the companies that can provide practical solutions to our burgeoning big‐data needs will cash in. One area that is bound for great expansion and that could become very lucrative is the development of user‐friendly sequence analysis programs.”

* No uniform definition of ‘death’ in India – “If the family of a person declared brain dead agrees to donation of any of the person’s organs, the steps outlined in the Transplantation of Human Organs Act (THOA) 1994 for declaration of brain death are followed, organs are retrieved, after which the ventilator is turned off. … Furthermore, while the diagnosis of brain death is first suspected when an MRI or CT of the brain shows extensive brain injury and there are clinical signs such as lack of pupillary response, corneal reflex, or cough reflex to substantiate this diagnosis, the gold standard test for certifying brain death is to establish the lack of spontaneous breathing through an apnoea test. The apnoea test is done twice and if there is no spontaneous breathing, the patient is certified brain dead by the panel of four doctors as required by the THOA. … there have been situations where after the second apnoea test has been done and brain death has been certified, the family has said ‘No’ to organ donation and asked the doctors to keep the patient on the ventilator till circulatory death occurs. The doctors comply because they do not want to escalate the grief of the family, and they also say that there are no guidelines about disconnecting the ventilator in a situation when organ donation is not authorised by the family. This means many such patients will continue to be ventilated despite being brain dead.”

* Against evolutionary essentialism – “In the past year, at least four fossil finds have been billed as overturning the story of human evolution. The 300,000-year-old Homo sapiens specimen from Jebel Irhoud, Morocco, is hailed as pushing back the age of our species by nearly 100,000 years. Similarly, discoveries in Israel (a fossilised jawbone), Saudi Arabia (a fossilised finger bone), and Siberia (several bone fragments) were each declared to be the oldest H. sapiens in their respective regions of the world. With each new find, researchers and news headlines announced that the fossils significantly altered our understanding of human evolution and dispersal from Africa. But if we have to rewrite the story of H. sapiens evolution so frequently, we might ask whether the plot we’re using is wrong to begin with.”

Piecing together stories published at disparate times and places but which have a theme or two in common.

In early August, scientists announced the presence of an underground lake on Mars near its south pole. Obviously, the next question that was going to be asked was if the lake could contain life. Many scientists have said it could if the lake contained liquid water; however, there is a catch: this Martian lake is understood to be extremely salty. As it happens, five years ago, scientists studying a hypersaline lake in Antarctica – in fact, the saltiest lake in the world – found that there exists a group of microbes in it called haloarchaea. Similar halophilic extremophiles are expected to be able to live in the salty underground lake on Mars.

Interestingly, scientists have been able to conceive of possible ways in which life might exist in various parts of the Solar System, not just on Earth. Two of the most extreme examples: on the hellishly hot surface of Venus, because of the possible presence of supercritical carbon dioxide, and in the ultra-cold hydrocarbon lakes of Titan. Taking it one step further, biochemists from the Foundation for Applied Molecular Evolution, Florida, recently devised two alternative forms of DNA that alien life might be based on.

One of them, Steven Benner, had come up three decades ago with the question whether DNA on Earth was composed of four nucleotides for a reason or whether it had simply been evolution’s first success on the genetic materials front. Since then, Benner and his colleagues have synthesised two new nucleotides that fit together in DNA, the other four nucleotides to, giving rise to a six-nucleotide sequence that could form the basis of new forms of life as well as new routes for evolution itself.

* Stephen Hawking puzzles – To commemorate the publication of Stephen Hawking’s last book, entitled ‘Brief Answers to the Big Questions’, its publisher has commissioned a series of 10 puzzles from a mathematics doctoral student at the University of Cambridge, each of which is based on concepts discussed in the book. The first puzzle was released on Physics World on September 20; the second puzzle is due out on September 25; the third on October 2; the fourth and fifth on October 9; and the last five on October 16 – which is also the day when the book will be out. Winners will receive an “exclusive print” from the Stephen Hawking estate. More details here.

* ‘How aesthetically pleasing is your country’s diffraction pattern?’ – A physicist at Columbia University set up a diffraction experiment – where light is passed through a small slit to observe how it bends around the slit’s edges. So far so good, except in this case the opening, instead of being shaped as a slit or a small circle or whatever, was shaped like a country. The physicist, Albert Rigosi, performed numerous experiments with the aperture shaped like the national borders of 113 countries.

Some interesting articles from around the web

* Turning science onto scientific publishing – “… journalology, a term coined by Stephen Lock, a former editor of The British Medical Journal. Its goal: improving the quality of at least a slice of the scientific record, in part by creating an evidence-based protocol for the path from the design of a study to its publication. That medical journals took a leading role isn’t surprising. A sloppy paper on quantum dots has never killed anyone, but a clinical trial on a new cancer drug can mean the difference between life and death. The field has grown steadily and has spurred important changes in publication practices. Today, for example, authors register a clinical trial in advance if they want it considered for publication in a major medical journal, so it doesn’t vanish if the results aren’t as hoped. And authors and journal editors often pledge to include in their papers details important for assessing and replicating a study. But almost 30 years on, plenty of questions remain…”

* Using DNA to track down ivory trade cartels – “… researchers created a geographical ‘genetic reference map’ of elephant populations across Africa, drawn from elephant dung data. They then sampled 38 large ivory seizures made worldwide between 2006 and 2015, and compared them to the map to identify where the elephants came from, accurate to about 185 miles. An average of 36% of the total number of tusks were sampled in each seizure. … The study [pointed] to the existence of three of the largest ivory cartels in Africa, operating out of Mombasa, Kenya; Entebbe, Uganda; and Lomé, Togo.”

* The unique thing about the exoplanet Indian scientists spotted – “Evidently, some types of planets are more common than others. Apart from the super-Earths/mini-Neptunes, the Neptune-sized and Jupiter-/Saturn-sized planets are prevalent. However, there is also a slim yet distinct group of planets lying between the Neptunian and Jovian/Saturnian worlds. These are the super-Neptunes or the sub-Saturn/sub-Jovians: their physical properties lie between Neptune-like and Saturn-like planets. Only 23 such planets are known till date – and K2-236b is one of them.”

* Twilight of a reindeer-herding tradition in China’s north – “Evenki reindeer herders have dwelled in China’s frigid far north for nearly two centuries. The Evenki are one of the country’s 55 official recognised ethnic minorities and have population of a little over 30,000, but only around 160 still tend to reindeer in the quiet, beautiful forests of larch, prime, and birch in the Inner Mongolia Autonomous Region. Fewer still live in ways that resemble traditional Evenki culture. New Aoluguya is a sleek, modern settlement: families reside in warm, timber-clad houses designed in the late 2000s by a Finnish firm, evenly spaced along well-kept streets with gardens out front. … But some worry that the leaving the forest has eroded – if not destroyed – what it means to be Evenki.“