The Xenon Collaboration's results signify a purely scientific spinoff: developments in one area of research that have led to advances in an unrelated scientific discipline. 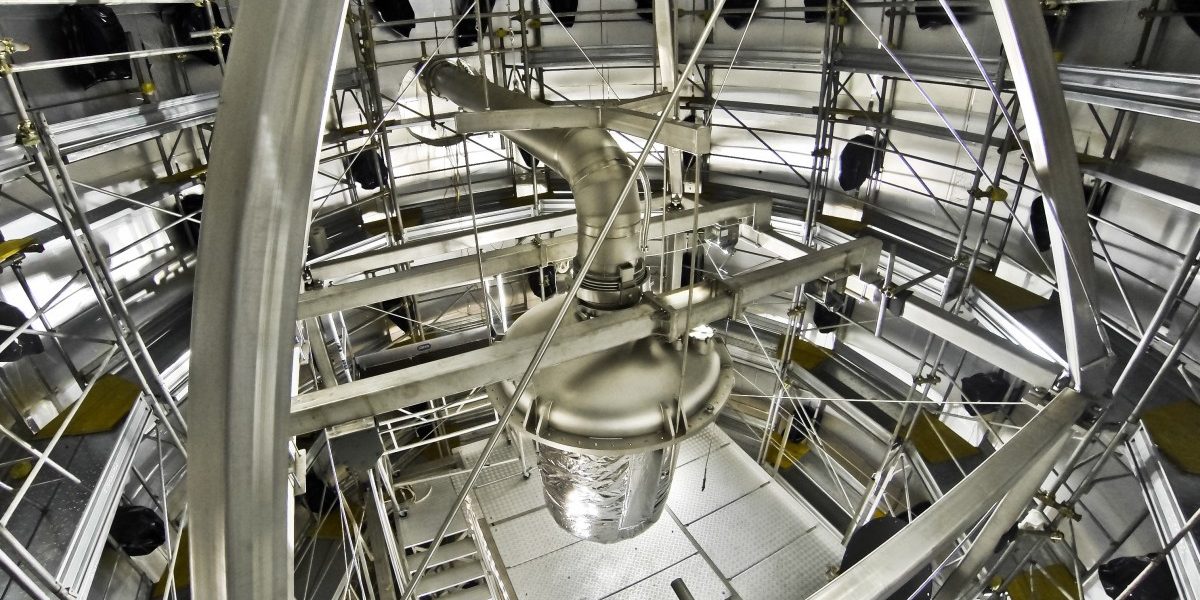 XENON1T: A cryostat containing the liquid xenon hangs from a support structure within the water tank. Credit: Xenon Collaboration

Our story today begins in the early 1970s, when a bright, young astronomer named Vera Rubin pointed a new and extremely sensitive spectrograph at the edges of galaxies.

The sort of galaxies she was interested in were the kind we used to draw in school. They had a central bulge with arms emanating from it, twisting themselves about their axis of rotation. We’re accustomed to drawing them face-on — as if you were looking at them from above — because that way they were perfect for art class. Now, imagine looking at a galaxy like this edge-on: as if  the axis of rotation is perpendicular to your line of sight. You’d still see the bulge but the arms wouldn’t be as apparent as they were before.

Rubin figured that if she was looking at a galaxy edge-on, she’d still be able to tell in what direction it was rotating. She did this by pointing her spectrograph at a short section of the arms of the spiral galaxy and measuring the Doppler shifts of spectral frequencies. Doppler shifts are a change in frequency due to relative velocity. Think about the last time you saw an ambulance pass by: it sounded higher-pitched when it was heading towards you and lower-pitched when it was heading away from you, right? That’s precisely because of the Doppler shift, and it affects electromagnetic radiation just the way it affects sound.

Once these spectral frequencies were measured on both arms, she used this to work out whether the stars and the dust that made up each arm were moving towards or away from her. This way, she was able to tell which way the galaxy was rotating.

Famously, Rubin drew up a plot of how the orbital velocity of the stuff that makes up the arms changes as you move away from the centre, and found something extraordinary. The outermost stars in galaxies orbited the central bulge at roughly the same speed as the inner stars. This in turn implied that the mass of the galaxy increased as you moved away from its centre, well beyond the visible central bulge itself. 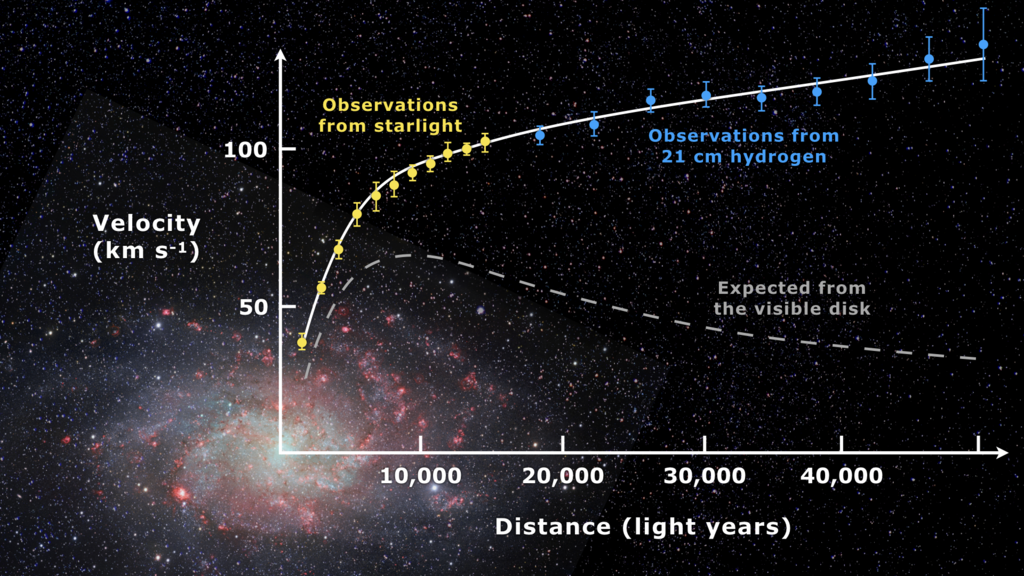 Rotation curve of spiral galaxy Messier 33 (yellow and blue points with error bars), and a predicted one from distribution of the visible matter (grey line). The discrepancy between the two curves can be accounted for by adding a dark matter halo surrounding the galaxy. Caption and credit: Mario De Leo/Wikimedia Commons, CC BY-SA 4.0

This was a paradox: the experimental result suggested that there was more stuff that made up the galaxy, only we couldn’t see it.

A popular way out of this paradox is to assume that there is a halo of dark matter surrounding the galaxy. Dark matter doesn’t emit electromagnetic radiation but it responds to gravity. Whatever smaller particles it is made of, they aren’t like anything else physicists know to be in the Standard Model, which includes electrons and neutrinos. So one way to make sense of dark matter is to ask: can we extend the Standard Model in a way that it naturally incorporates particles that behave this way?

The answer is a clear ‘yes’. Physicists hypothesised that dark matter could be made up of smaller particles called weakly interacting massive particles (WIMPs), and that we could understand their behaviour in certain extensions of the Standard Model. (The funny thing is these extensions were constructed with entirely different goals in mind!) Many experimental collaborations are currently attempting to directly detect these WIMPs.

The “weakly interacting” in WIMPs

One of them is the Xenon Collaboration. It hopes to observe interactions between atomic nuclei and WIMPs that will kick the nuclei around, producing bright flashes of light that can be detected by photomultiplier tubes. Because WIMPs interact so weakly with regular matter, a stronger interaction signal can be obtained if there is more matter to interact with. So equipped with over three tonnes of liquid xenon, the collaboration’s XENON1T detector is buried deep below the Gran Sasso d’Italia mountain in Italy.

While it waits patiently for a WIMP-nucleon event, could it be used to do something else?

It seems so. “Weakly interacting” should really be understood as “interacts via the weak nuclear force,” one of the fundamental forces described by the Standard Model of particle physics. This force allows heavier, unstable nuclei to break up into lighter, more stable nuclei through a process called radioactive decay.

Also read: Is the Universe As We Know it Stable?

A nuclei that’s unstable because it has too many protons can undergo another kind of β-decay: it swallows one of the electrons hovering about nearby in a process called electron capture. Effectively, a proton eats the orbital electron, yields a neutron and spits out a neutrino.

However, this mechanism is forbidden in some situations, and in these cases a weaker effect might kick in. It’s called two-neutrino double electron capture and it’s exactly what it sounds like: the nucleus simultaneously captures two electrons from nearby orbitals.

This capture of electrons leaves behind vacancies in the electron cloud, and it’s favourable for electrons further away from the nucleus to rush in and fill them. And quantum theory respects energy conservation: if we must give an electron energy to free it from an atom, then an electron that wishes to move closer to the nucleus must give up some of its energy. This release is typically in the form of X-ray radiation.

If we know that a certain nucleus decays via two-neutrino double electron capture, then we can measure its half-life by tracking and directly counting each emissions. The longer its half-life, the more stable a nucleus is.

The XENON1T detector did precisely this, and the collaboration that operates it reported its findings earlier this week. It had measured the half-life of an isotope of xenon with 54 protons and 70 neutrons (Xe-124): a whopping 1.8 × 1022 years, or just over a trillion times the age of the universe.

When we speak of investment in basic research, we usually justify them by highlighting the potential technological spin-offs: unintended but serendipitous innovations that find application in industry and medicine. Indeed, some might even become popular consumer goods.

Happily enough, there are purely scientific spinoffs as well: developments in one area of research that might lead to advances in an unrelated scientific discipline. The Xenon Collaboration’s results signify one such. It was designed to detect dark matter and it successfully measured the longest directly measured half-life of a radioisotope.

Jouni Suhonen, a physicist at the University of Jyväskylä, Finland, noted in an article for Nature that the successful measurement “lays the foundations for experiments that aim to detect these rare decays in other nuclei.” He goes on to say that the measured decay rates “contain information about nuclear structure that is extracted from nuclear models and can be applied by researchers in the field of nuclear-structure theory.”

And finally, would any of this have happened had Vera Rubin not turned her attention to the farthest galaxies and assiduously measured their rotation curves?