How Do We Know Supermassive Black Holes Are Out There?

'Normal-sized' black holes are known to be the remnants of dead stars that were once more massive than our Sun. But how supermassive black holes are born and how they even exist remains unknown. 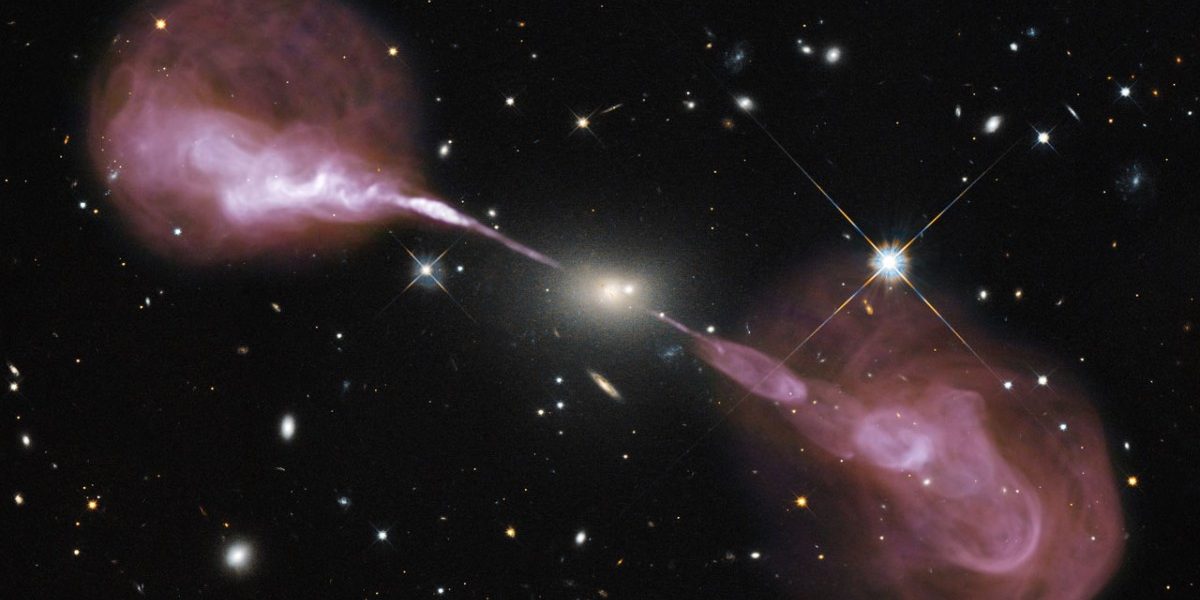 A major unanswered question about the universe’s evolution asks how large galaxies like our own Milky Way formed. Astronomers hypothesise that smaller galaxies could have collided and merged to form bigger ones. However, no observational proof exists to support these views.

What exists at the centres of large galaxies is another mystery that has long puzzled astronomers. These cosmic objects are apparently massive – weighing a million or billion times as much as the Sun, with their intense gravitational pull holding entire galaxies several thousand lightyears wide together. Astronomers call these objects supermassive black holes (SMBHs).

Such black holes are the terrifyingly larger counterparts of regular black holes. According to Albert Einstein’s general theory of relativity, a black hole defines a region of space bounded by what astronomers call the event horizon. ‘Normal-sized’ black holes are known to be the remnants of dead stars that were once more massive than our Sun. But how supermassive black holes are born and how they even exist remains unknown.

What makes black holes even more interesting is that they don’t emit any radiation (from their innards). Neither matter nor radiation can escape their gravitational pull if it gets caught on the event horizon. As with the origins of SMBHs, astronomers don’t know what exactly would happen to an object should it fall into the black hole itself.

If these objects are completely dark, how do astronomers know they’re there, then? They find out by looking for signs of the SMBH’s influence on its surrounding stars and matter.

For example, when SMBHs were first discovered, radio astronomers found many of them emitting narrow jets of radiation with so much power in the radio part of the spectrum that each jet was brighter than all the stars in the host galaxy combined. These highly luminous galactic nuclei are today called quasars (short for quasi-stellar radio source).

How do such jets emerge from objects that let nothing escape? Astronomers have come to understand that many of these objects aren’t stationary but are rotating. The SMBH, together with its rotation and strong gravitational pull, accelerates the material in its vicinity to speeds close to that of light, forming a structure called an accretion disk. Twisted magnetic fields surrounding the black hole collimate this fast-flowing material into twin jets, shooting them in diametrically opposite directions perpendicular to the plane of the galaxy (see below). 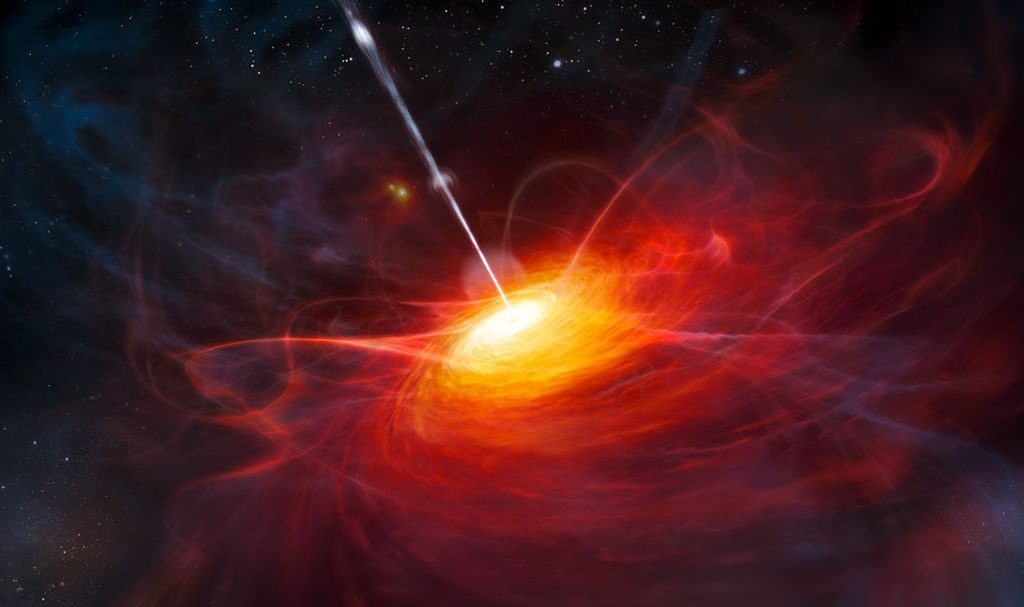 An artist’s impression of how ULAS J1120+0641, a very distant quasar powered by a black hole with a mass two billion times that of the Sun, may have looked. Credit: ESO/M. Kornmesser, CC BY 4.0

However, these radio jets weren’t straight, which they should have been if they had originated from a single SMBH. Instead, they were bent by a few degrees. By studying the physics underlying these jets using sophisticated computer simulations, astronomers realised that the jets were actually moving in a helical pattern that made them precess in a conical shape. Such precession was found to happen even in weaker jets.

A study published in September 2018 predicts that instead of one, these galaxies may be harbouring two supermassive black holes at their centre, orbiting each other. They are technically called a supermassive black hole binary. Astronomers came to this conclusion by comparing the observed radio maps of the jets with computational models.

The presence of a second SMBH would change the direction of the jets made by the first one in a periodic and cyclical manner over millions of years. Astronomers found the appearance of such motion imprinted on the lobes created by these jets. Lobes are volumes of nearby space where these jets end up depositing all of their content and energy. Jets and lobes are labelled in the radio image of the radio galaxy 3C 334 (stars are invisible in radio wavelengths). The image, from left to right, spans a distance of five million lightyears. A periodic change in the direction of the jets, called precession, is what is predicted to be the effect of double supermassive black holes. Credit: Martin Krause, University of Hertfordshire

Of the 33 radio galaxies that astronomers studied, 24 showed clear signs of the presence of supermassive black hole binaries. As Martin Krause, a senior lecturer at the University of Hertfordshire, UK, and the lead author of the study, writes in The Conversation, “We found evidence of such a pattern in about 75% of our sample of radio galaxies, suggesting that supermassive black hole pairs are the rule, not the exception.”

Also read: Black Holes Are Simpler Than Forests and Science Has Its Limits

How might these supermassive black hole binaries be formed? Krause wrote, “Such pairs are actually expected to form after galaxies merge. Each galaxy contains a supermassive black hole, and since they are heavier than all the individual stars, they sink to the centre of the newly formed galaxy where they first form a close pair and then merge under emission of gravitational waves”.

A press release accompanying the study notes, “This confirms the current understanding of cosmological evolution – that galaxies and their associated black holes merge over time, forming bigger and bigger galaxies and black holes.”

But this study doesn’t directly prove the existence of binary supermassive black holes – instead, it points to their indirect signatures. A definite proof of their presence would be to detect gravitational waves emitted by them. This may be done with two upcoming detectors: the space-based Laser Interferometer Space Antenna and the radio telescope, Square Kilometre Array.

Working to unravel these elusive objects, Krause reflects, “This would finally prove their existence – half a century after they were first proposed. It’s an exciting time to be a scientist.”