How Bonobo Mums Are Committed to Improving Their Sons' Sex Lives

Bonobo sons who stayed with their mothers were found to be thrice as likely to sire offspring than those that didn't. 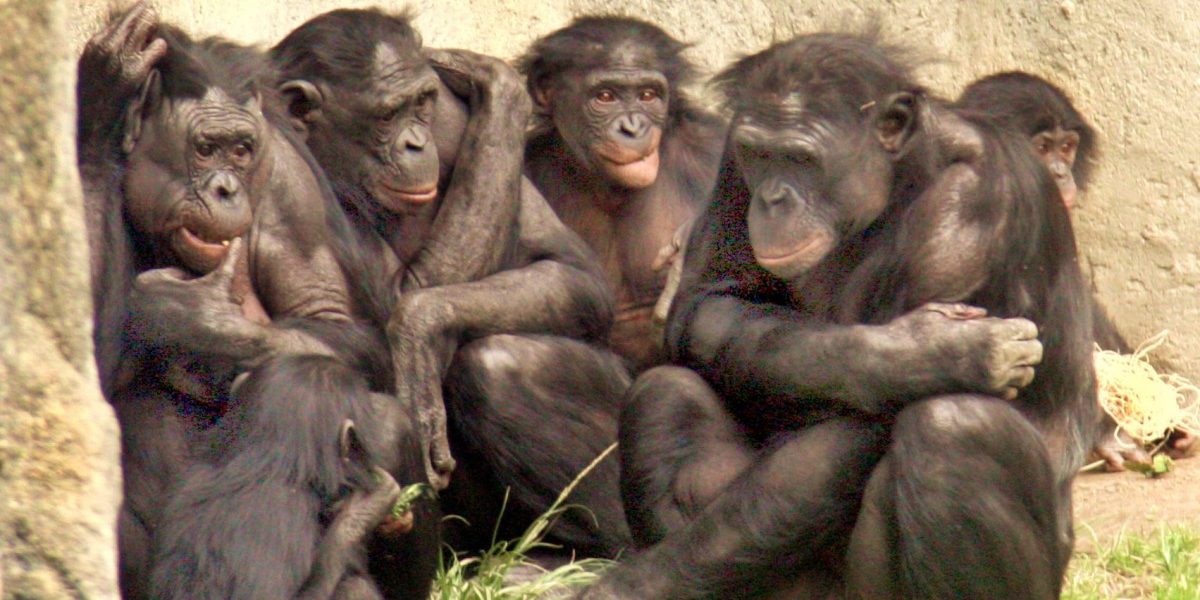 The animal kingdom is replete with examples of mothers helping their young ones. The African meerkats teach their young how to handle dangerous scorpions, a vital source of food for them. The orcas guide their young ones to rich feeding grounds.

So bonobo moms, in this regard, could seem like an oddity. Bonobo societies are mostly matriarchal and male-philopatric, which means the females occupy the highest ranks and their sons live alongside their mothers while the daughters leave the native community.

As a result, male bonobos staying with their mothers get easy access to other females within the community, increasing their odds of mating. While that seems fairly obvious, there are layers to this story.

Martin Surbeck, a primatologist at the Max Planck Institute for Evolutionary Anthropology, and his colleagues stumbled across something unusual while they were studying wild bonobos in the forests of the Congo. Some of the females behaved like males – competing over other fertile females and interrupting some males’ attempts at mating. To make sense of this eccentricity, Surbeck collected the poop of these bonobos, isolated their DNA and ran paternity tests.

Also read: To Learn More About the Origins of Human Language, Look at Macaque Gestures?

The results resolved the mystery. It seems some of the females were mothers, and they were chasing off other males when their sons were trying to court females. In addition to standing guard, the mothers also interfered with mating attempts of other males and occasionally joined forces with their sons to expel rival males and maintain their rank in society.

This study shows that bonobo mothers significantly improved their sons’ sex lives. Bonobo sons who stayed with their mothers were found to be thrice as likely to sire offspring than those that didn’t.

The researchers were curious if the same could be said of chimpanzee society; the bonobos and the chimpanzees are genetic cousins. But it wasn’t so. Chimpanzees also have male-philopatric societies and receive help from their mothers. However, it didn’t seem like their mothers improved their sons’ sex lives in any meaningful way.

Researchers reason this is probably because, in chimpanzee society, the males rank higher than the females.

The “bonobo females do have fairly dominant positions in the hierarchy and they are able to exercise the power they get from these dominant positions in determining their life history strategy – to protect their sons and enhance their reproductive success,” Anindya Sinha, a primatologist and a professor at the National Institute of Advanced Studies, told The Wire. He wasn’t involved in the study.

The study also resolves another question: whether the fitness of bonobo and chimpanzee sons depended only on genetic factors. For example, if a mother had the genes for better fitness, then she would pass them on to her son; his fitness would then be entirely genetically determined.

However, the researchers have effectively deduced that it is also significantly environmental, and not just genetic, because of “the comparison that they’ve been able to make between chimps and bonobos,” Sinha said. The comparison shows that “although genetically they are very similar, the actual behavioural profiles of the females are different” among the bonobos and the chimpanzees, and so it is “likely that these behaviours themselves have implications for the survival and improved fitness of their sons.”

Surbeck and his colleagues are now trying to understand why bonobo mothers root so hard for their sons. They think their strategy offers something like kin selection, where the recipient – the mother, in this case – receives indirect fitness. “If you make sure that your sons have more children, it ultimately translates, in evolutionary terms, to passing on your genes,” Sinha explained.

Also read: Chimpanzees Have a Sense of Morality

Scientists have observed this pattern among orcas and humans as well. They now believe that these animals have an evolutionary incentive to prolong their lives beyond reproduction: to ensure their descendants are fertile and have the best sexual opportunities. This in turn can ensure their genes live on.

However, according to Sinha, that’s just one interpretation. Another is that the females of a species could have a number of roles to play after menopause in the cultural propagation of knowledge.

He provided the example of African elephant herds, the matriarchs of which know “where the water is” and how best to get to it. They “may have lost their reproductive prime but through their knowledge systems and cultures, they contribute to the survival of individuals within that group.

“And that’s enough reason to prolong the life of a post-menopausal female.”

To Sinha, “this is perhaps one example” to understand “how complex social relationships and their effects can be in a non-human society. They have complexities of their own which we are discovering only now.”