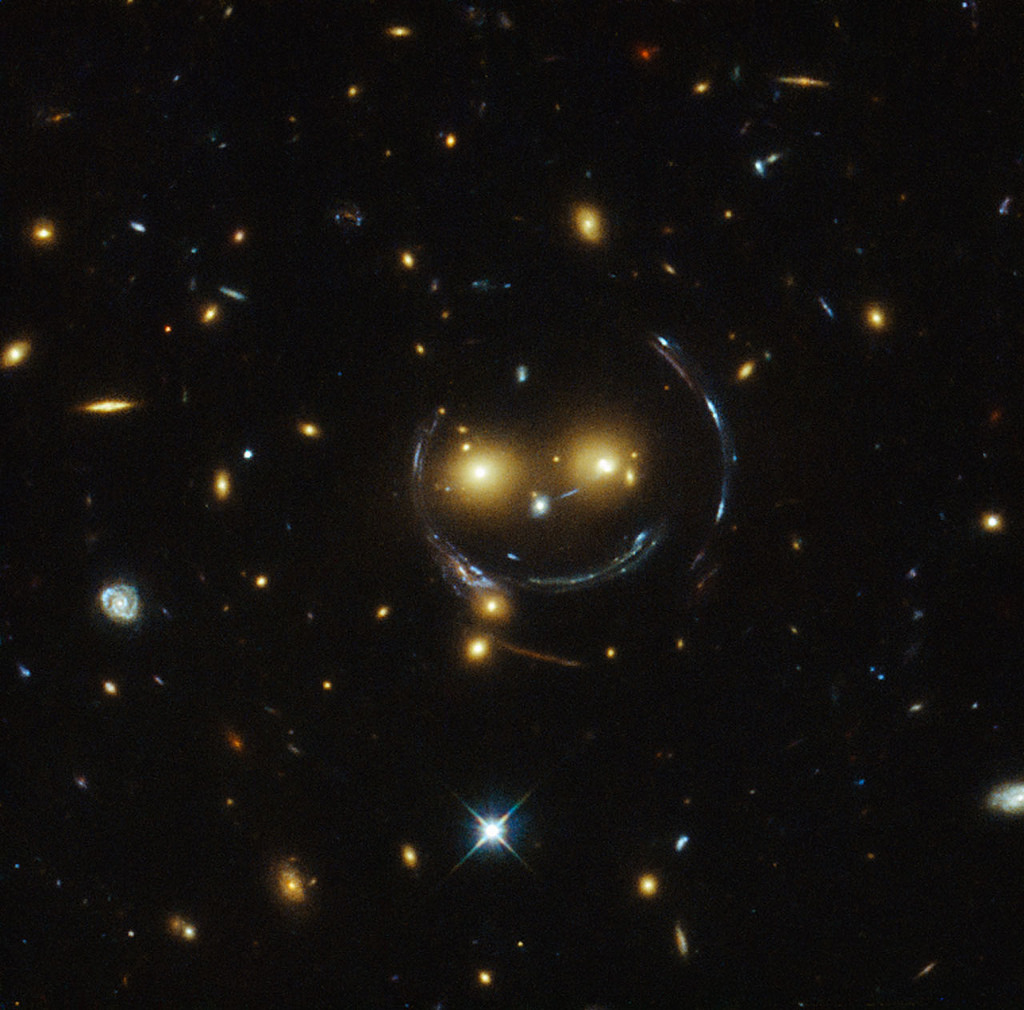 The galaxy cluster SDSS J1038+4849 (seen as two 'eyes' of the face) bends the light of stars coming from behind them, resulting in the arc of light seen as a 'smile'. The phenomenon is called gravitational lensing and is explained by the general theory of relativity. Credit: gsfc/Flickr, CC BY 2.0

One of the most pressing open questions in modern physics is whether Albert Einstein’s description of gravity is complete, or if it is missing some parts. Since he created his general theory of relativity in the early 20th century, scientists have designed several experiments to test if its various parts are correct. Perhaps most recently, astronomers observed how the light from a star swinging around the black hole at the Milky Way’s centre changed due to the black hole’s gravity, confirming one more of Einstein’s predictions.

A cornerstone of this theory is that light bends around massive objects in space – a phenomenon called gravitational lensing, since it is analogous to light bending due to an optical lens. Although Isaac Newton predicted a similar effect in the 17th century based on his calculations, Einstein’s theory predicted a deflection of twice as much. Arthur Eddington confirmed the latter in 1916. However, neither Einstein nor Eddington had high hopes for the practical applications of this phenomenon.

In the early 1920s, a Soviet scientist named Orest Chwolson realised that light from a distant body would produce multiple images of that body when lensed (see video below and here).

However, Chwolson also figured that this would be a rare occurrence because the source of the light, the lensing body and the observer would all have to be in a straight line. Einstein himself wrote in the mid-1930s that “there is no hope of observing this phenomenon”.

However, around the same time, an American astronomer named Fritz Zwicky realised that if a cluster of galaxies was in the foreground of a more distant object that an observer on Earth was trying to see, then the observer should be able to use the cluster as a giant lens to magnify light from the background object. In fact, the amount of lensing could also be used to calculate how much cluster itself weighed: the more mass it contained, the more its gravitational pull would alter the course of light, the more the lensing effect would be.

In the early 1960s, an astronomer from Norway named Sjur Refsdal proposed that observing multiple images of objects whose brightness changed over time can be used to measure how fast the universe was expanding. For this technique to work, however, the objects of interest would have to be much farther compared to the lensing object.

Astronomers verified Refsdal’s idea in 1979, when they observed the first lensed object: a black hole in the centre of a remote galaxy the radiation from which had been lensed by a giant elliptical galaxy. This black hole was ‘eating’ up materials at the galaxy’s centre, belching various amounts of radiation, giving it a flickering appearance. Such regions of the universe are called active galactic nuclei (AGN).

Since the discovery of the first lensed AGN, scientists have discovered several lensed galaxies and other AGNs. This has revolutionised our understanding of how galaxies form and is also helping us get closer to answering what dark matter could be made of. A lot of research groups have also developed techniques based on Refsdal’s idea to measure the universe’s rate of expansion.

In recent years, scientists have used two different techniques to measure this rate, captured in a number called the Hubble constant, and arrived at different numbers. This is puzzling. So in a new attempt to resolve the issue, some astronomers are turning to gravitational lensing, hoping it can swing the verdict in favour of one number over the other.

While Refsdal originally proposed his method keeping in mind light from distant supernovae, a lensed supernova has proven to be a very rare sight. Fortunately, AGNs are more common and scientists have used them instead to measure the Hubble constant.

The technique in question has two parts. First, astronomers figure out how the light source’s brightness changes in time. Second, they determine how exactly the lensing object – a cluster of galaxies, say – will lens the light. The first part is very difficult with AGNs because an AGN’s flickering depends on too many physical parameters. So scientists prefer working with supernovae, specifically a subclass called Type Ia supernovae because the brightness of all these supernovae varies the same way.

Advances in optics and telescope technology have also given us more powerful instruments to work with. For example, in 2016, astronomers used the intermediate Palomar Transient Factory, an experiment that uses a wide-field telescope at the Palomar Observatory, California, to discover a supernova that was extremely bright compared to what is expected for its class of explosion. This indicated that the supernova’s light might have been lensed by other objects in its path towards us.

The astronomers subsequently pointed the Hubble space telescope in the direction of the supernova and, sure enough, spotted the multiple images characteristic of gravitational lensing, in this case by a galaxy.

Also read: Why Scientists Are Confused About How Fast the Universe Is Expanding

The astronomy community plans to repeat this procedure with multiple supernovae being spotted by ongoing surveys like the Zwicky Transient Facility at the Palomar Observatory. In fact, in the next five to ten years, we expect to discover and monitor hundreds of such events with the Large Synoptic Survey Telescope, an ambitious experiment that will come online in Chile at the beginning of the next decade.

While lensed AGNs have allowed us to measure the Hubble constant to better than 3% precision, lensed Type Ia supernovae have notable advantages. Since we better understand their flickering patterns, we can study the multiple images formed by lensing their light with more precision than if the light had come from an AGN. Since we also know the intrinsic brightness of Type Ia supernovae very well, we can better measure the magnification the lensing object provides. (This also allows us to test whether Einstein’s theory of gravity correctly predicts how supernovae should be magnified.)

The multiple images of a lensed supernova can arrive at very different times at Earth depending on the path each beam of light has taken. If some beams arrived earlier than others, that gives us time to point our telescopes towards the exact point in the sky, in time to catch the latecomer beams. These beams will likely carry images of the supernova in its infancy, giving us an opportunity to learn about what kind of star was behind the explosion.

Such opportunities are particularly valuable because, in the absence of gravitational lensing, we have to ‘catch’ the supernova very early very quickly to have a chance to see it unfold. Lensing, on the other hand, can cause a  relative delay between multiple images of the same event, allowing us a bit of time to prepare. All together, lensed supernovae present an excellent route to study gravity, the expansion of the universe and some of the brightest explosions we know.