Like a buffer between the upper atmosphere and Earth, clouds control the amount of energy available on the planet’s surface, and play a very important role in regulating climate. 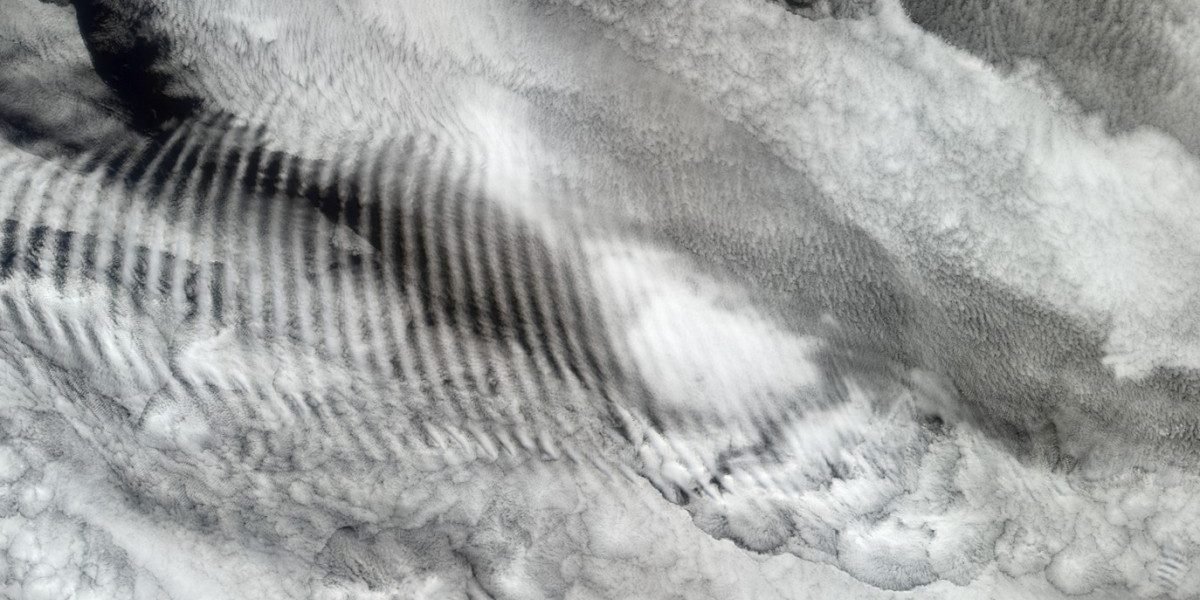 For some reason, the Oxford English Dictionary offers two definitions of gravity waves. The first one is plain wrong because ‘gravity waves’ is offered as a synonym of ‘gravitational waves’. The latter are ripples of energy in spacetime set off by the acceleration of massive bodies.

On the other hand, gravity waves are born whenever the interface between two fluids of different densities is disturbed. This happens aplenty on Earth. For example, disturbances in the interface between wind and water gives rise to harmless waves on the water’s surface. But for all their simplicity and ubiquity, they can also be deceptive. Gravity waves in Earth’s atmosphere can alter the flow of winds at large scales, in turn affecting weather patterns.

Case in point: Last month, a team of climate scientists reported that atmospheric gravity waves may be responsible for driving away cloud cover over the Atlantic Ocean – a serious issue the researchers liken to “pulling away a sun-shade” from over the water.

Like a buffer between the upper atmosphere and Earth, clouds control the amount of energy available on the planet’s surface. They play a very important role in regulating climate. Low-lying clouds above oceans are often dubbed “climate refrigerators” for the part they play in cooling. The formation and sustenance of such lower marine cloud cover depends on a variety of dynamic processes. Modelling how this happens is one of the major goals of climate science. And like all major goals, it is easier said than done.

Most climate models rely on factors that affect cloud cover over a season, sacrificing detail for tractability. But climatologists have often observed that the variation in cloud cover can be very high even over a matter of days.

The authors of the current study analysed climate data obtained between 2012 and 2017 and found abrupt transitions in cloudiness over the southeast Atlantic Ocean – sharp boundaries demarcating overcast and clear skies, in space and in time.

Of course, winds could be responsible for clearing the cloud cover. However, the subtropical southeast Atlantic is characterised by southward and eastward winds. On the other hand, the cloudiness transition boundary towards the west. This suggested that a different mechanism was at play.

The researchers were lead to suspect gravity waves when they realised that winds coming from the coastal highlands of southwest Africa, along with the land breeze, could be interacting with the layer of marine cloud cover. In effect, this interaction gives rise to the two-fluid interface, disturbances in which could lead to gravity waves. After that, the cloud-cover mystery could be explained using well-documented fluid dynamics phenomena.

Atmospheric gravity waves have been known to enhance turbulence. This in turn encourages the mixing of fluids within the cloud layer and the warmer and drier air layer above it. This process can cause clouds to rapidly erode away – much like the reduction in cloudiness over ten minutes or so the researchers observed in real-life data.

The study did not make direct observations to verify its authors’ ideas, using a model instead. So the hypothesis – that gravity waves could be responsible for the substantial flux in marine cloud cover over the Atlantic – is an informed guess, buoyed by arguments from atmospheric fluid dynamics and a favourable topography of the coastal land. A more detailed analysis, together with more modeling and simulations, is needed at the moment and could more lend credence to their hypothesis. The authors mention in their papers that such studies are currently underway.

State-of-the-art predictive climate models operate at a resolution that is often not fine enough to account for gravity waves. However, gravity waves have a profound impact on the flows of fluids and phenomena that these models hope to resolve. A thorough understanding of the processes that trigger these waves and their interaction with cloud layers and the land below will go a long way in improving existing models of weather prediction.

At the same time, lab experiments – instead of those in the ‘field’ – might be a better way to understand these processes because, in nature, they operate at scales both large and small at once, making them difficult to track and record. Even though the study does not provide new insights into the physics of atmospheric gravity waves, it does implicate them in a large-scale weather phenomenon, highlighting a need to include gravity wave effects in climate modelling.

Gravity waves are certainly not gravitational waves, but here on Earth, they are more consequential than their more famous counterparts.