The gravity assist is a versatile instrument in the mission designer’s toolbox. 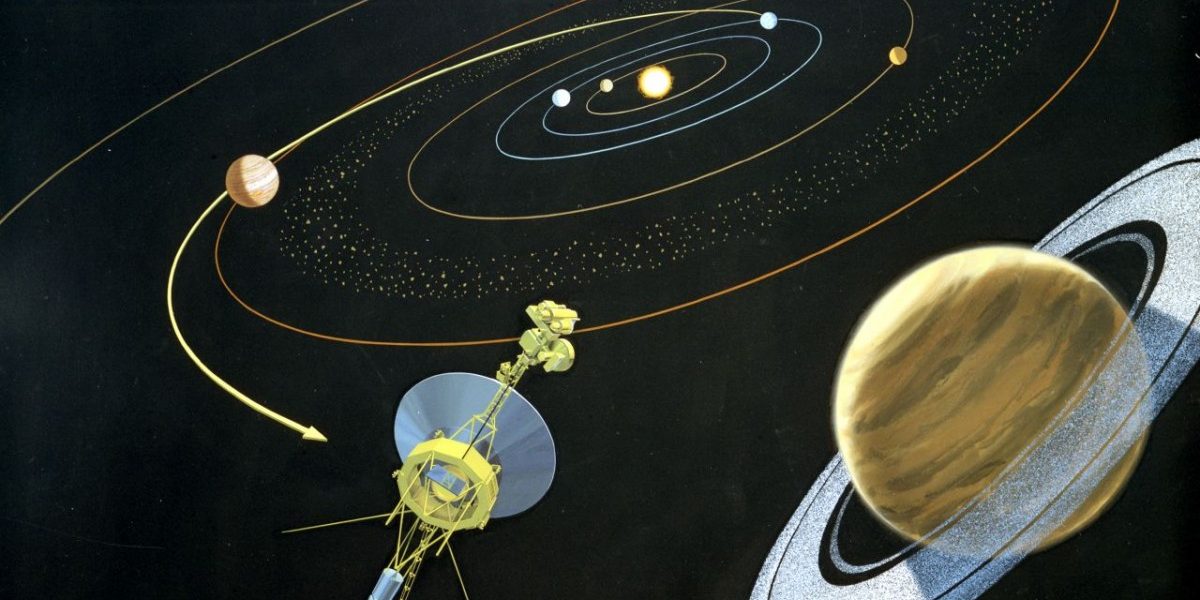 In these manoeuvres, a spacecraft exchanges its momentum in a close encounter with a planet to gain velocity. Gravity assists have been used in numerous interplanetary missions to propel spacecraft towards their destinations.

Gravity assists are also useful because it’s not practical to simply add more fuel to power a spacecraft. Adding more fuel makes it weigh more. This means more fuel needs to be added to the rocket to launch the now-heavier spacecraft. Since including extra fuel also increases the rocket’s mass, more fuel is needed to carry that fuel, and so on.

As a thumb rule, the fuel requirements increase exponentially with more mass added to the spacecraft. Heavier spacecraft may require a more complex rocket to be built to meet the demands. Such increases in cost and technological complexity can be saved by using gravity assists.

They also allow us to do things that are beyond our current abilities. In the 1970s, some of the most ambitious spacecraft in history were launched: Voyager 1 and 2, both by NASA. They would go on to escape the Sun’s gravity and exit the Solar system. Voyager 1 entered interstellar space in 2013 and Voyager 2 is expected to soon. And it wouldn’t have been possible without gravity assists.

After launch, the twin Voyagers didn’t have enough velocity to escape the Sun’s gravity straightaway. It was and remains impossible for us to build a rocket powerful enough to achieve that. The Titan III rockets that launched the Voyagers (10 days apart) left them with enough energy just to get to Jupiter.

To overcome this problem, the Voyagers were made to swing around the gas-giant to acquire the velocity boost needed to escape the Sun. As each spacecraft approached Jupiter, the planet’s gravity sped it up. Such a close gravitational encounter with a planet is called a flyby. 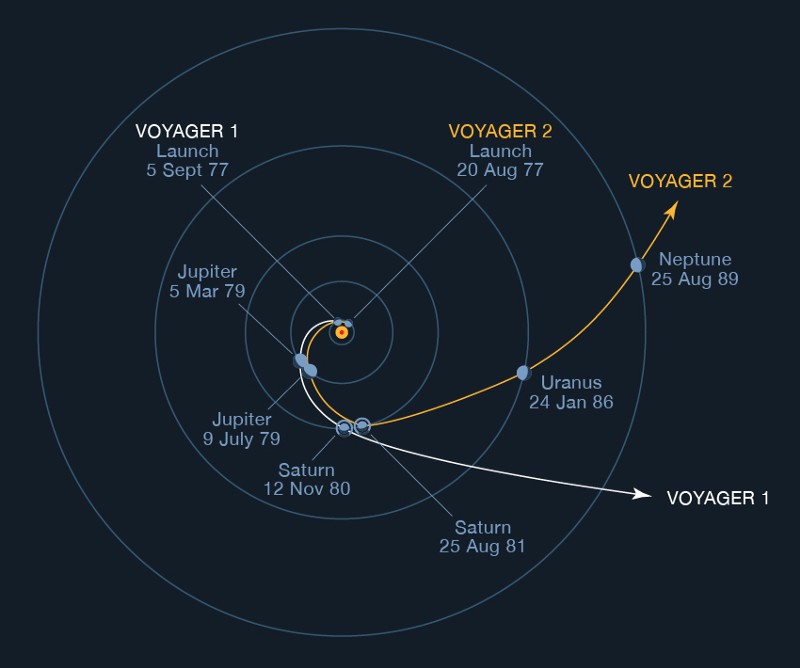 The trajectories of Voyagers 1 and 2, showing gravity-assist manoeuvres at Jupiter and Saturn to escape the Solar System. Credit: NASA

The extra velocity comes from the planet itself. It’s worth remembering that the spacecraft also has some mass, even if insignificant compared to Jupiter. Gravity works both ways: the spacecraft pulls on Jupiter – even as Jupiter pulls on the spacecraft – slowing it ever so slightly in its orbit around the Sun.

Voyager 2 had a velocity of ~10 km/s when it approached Jupiter. After the gravity assist, the velocity increased to ~25 km/s. 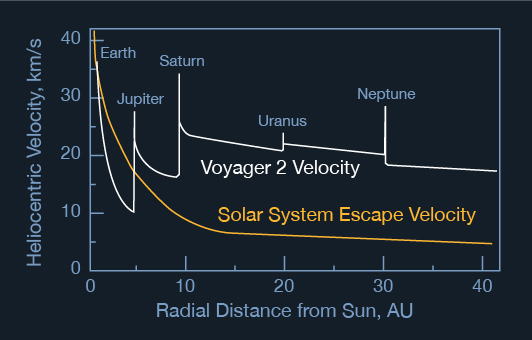 Voyager 2 spacecraft velocity as a function of distance from the Sun, compared to the Solar-System escape velocity. Credit: NASA

Since the Voyager missions, gravity assists have been used to get everywhere in the Solar System. The NASA Cassini probe to the Saturn system weighed over 5,000 kg at launch – on the heavier side for interplanetary missions. The two Voyagers weighed less than 900 kg each. The rocket that launched Cassini, Titan IV, was not significantly more powerful than the Titan III.

The ESA Rosetta spacecraft studied the comet 67P after an arduous journey. To rendezvous with the comet, Rosetta had to match the comet’s high velocity, with three flybys around Earth and one around Mars.

But why slow down at all?

Missions to the inner Solar system face different challenges from those to the outer Solar System. Consider the most recent mission to Mercury – the ESA BepiColombo – that launched on October 20, 2018.

Mercury lies deep in the Sun’s gravitational well. This means a spacecraft going towards Mercury will be constantly accelerated due to the Sun’s gravity. On such a trajectory, BepiColombo would reach Mercury with a velocity too high to allow itself to be captured into orbit.

One way out is to fire the engines through thrusters pointing in the direction of flight as a form of braking. However, this would consume a lot of fuel and that’s not practical. Mercury also lacks a significant atmosphere like Venus, Earth or even Mars, so aerobraking isn’t an option either.

The BepiColombo mission designers approached the problem with a gravity-assist solution. The probe will use one gravity assist from Earth, two from Venus and six from Mercury itself to slow down. With each flyby, the probe will shed a part of its orbital velocity. After multiple flybys, it will be slow enough to have Mercury capture it. BepiColombo is currently scheduled to orbit Mercury in December 2025 if everything goes according to plan.

The NASA Parker Solar Probe was launched this year to study the Sun by being in its atmosphere. As with BepiColombo, Parker will be constantly accelerated when approaching the Sun. So over six years, Parker will use seven gravity assists from Venus to achieve its final orbit in 2024. This orbit will take it to its target destination: just 6 million km from the Sun’s surface. 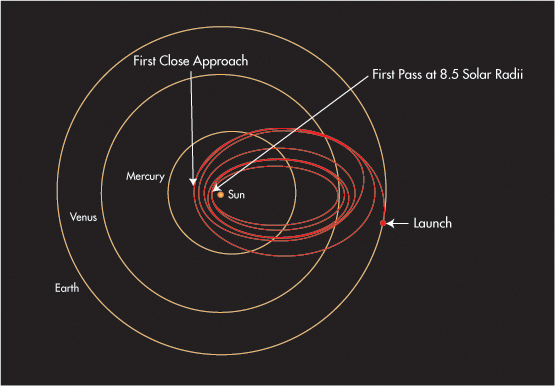 The Parker Solar Probe will use seven gravity-assists from Venus to achieve its closest pass to the Sun. Credit: NASA

The physics of gravity assists can also be used to change an orbit’s inclination.

In 1990, the NASA-ESA Ulysses mission, first to study the Sun’s poles, was launched. To do so, it had to leave the orbital plane of the Solar System – the plane in which the eight planets move – and achieve a strong tilt.

In 1992, Ulysses used a gravity assist from Jupiter, near its north pole. The planet’s gravity bent the spacecraft’s trajectory southward, putting Ulysses in an orbit that took it past the Sun’s north and south poles at an inclination of 80°.

The gravity assist is a versatile instrument in the mission designer’s toolbox. Future space missions could utilise it to accomplish even more – like having an orbiter use Charon to explore the entire Plutonian system.