Unlike countries like the US or even China, India doesn’t have a national repository to store fossil finds. Only this year, there has been some talk of a natural history museum in Delhi – but the damage of this lethargy is evident all over the country. 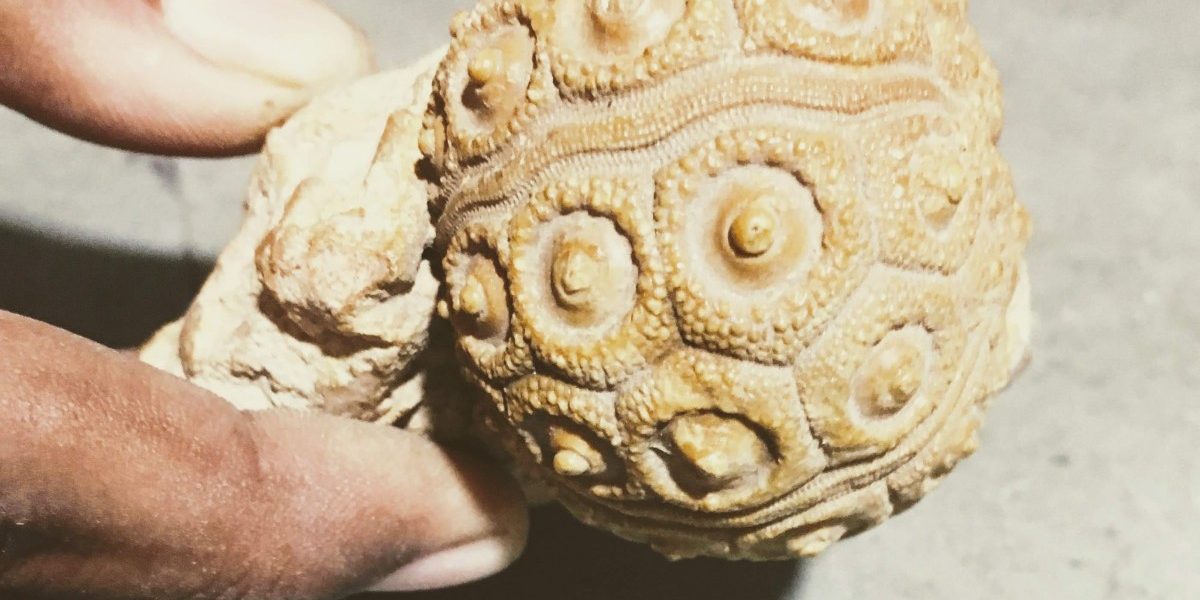 The cidaris fossil, a relic of a slate-pencil sea urchin. Credit: Anupama Chandrasekaran

The fossil of the cidaris looked like a self-embroidered Christmas ornament. It was the relic of a slate-pencil sea urchin, or cidaris, a punk-styled marine critter. Alive, it looks like a golf ball with spikes, or a comic-book version of an exploding firecracker.

Vishal Verma, a 48-year-old fossil-hunter and conservationist, was rummaging through an overcrowded closet, sifting through a wobbly pile of electrical-fan cartons. They were now stuffed with fossils of ancient life, some wrapped in plastic, others in old newspapers.

Entombed in one of these boxes was the million-year-old, petrified fossil of the cidaris. It was blonde from the limestone that had meticulously ripped through every cell of its existence.

Verma had found numerous breathtaking fossils like this one. But one particular kind eluded him: That of the poster children of these relics, the dinosaurs.

Manavar is a sleepy town in central India, surrounded by rolling hills of pale limestone and dark volcanic basalt. Dinosaurs once walked these lands.

On the geological timescale, it was the Cretaceous period, 146 to 65 million years ago. It was overall warm on earth with high sea levels.

Also read: A Brief History of Earth: How it All Began

India had broken free from Africa and Madagascar. It was an island continent in the southern hemisphere. A seaway cut through its centre and a vast ocean spread out to its north, separating it from Asia. The Himalayas weren’t born yet.

Dinosaurs ruled this period – until, of course, apocalypse struck. 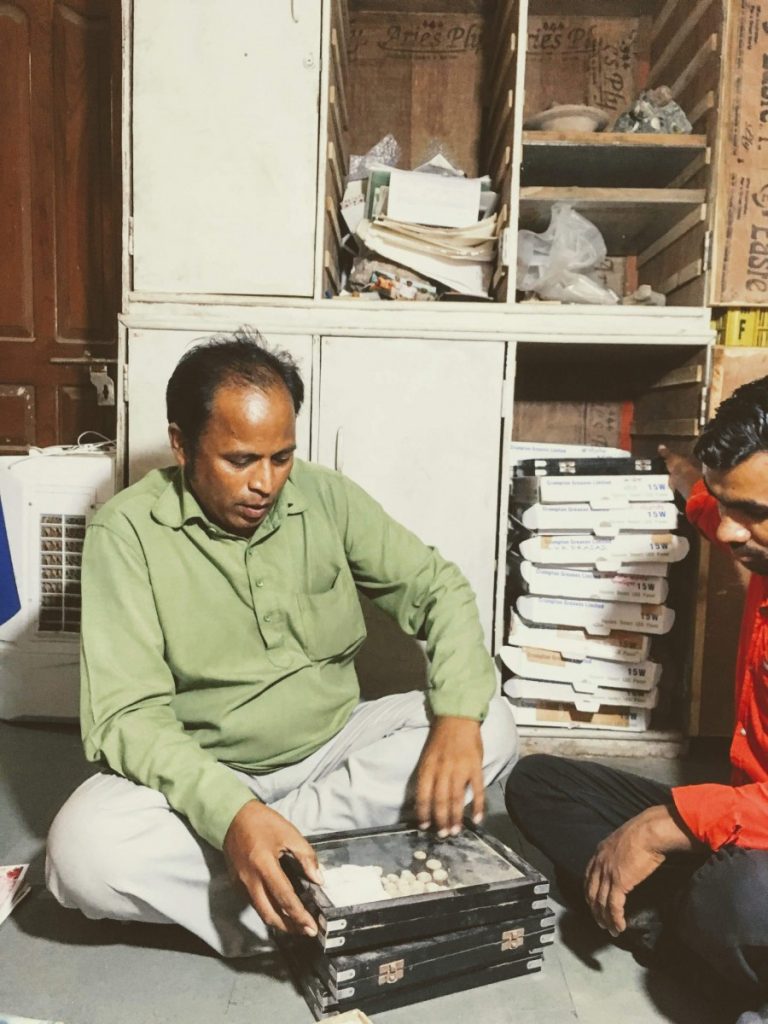 A widely accepted theory is that dinosaurs were killed by a meteor or an asteroid crash. But other palaeontologists believe that a series of colossal volcanic eruptions in a part of western India decimated these megafauna 65 million years ago.

Sediments deposited during what is called the Deccan volcanic activity are a treasure-trove of dinosaur nests and eggs. The fossil-rich rocks along the banks of the Narmada river in Central India were formed during this geological event.

In fact, the first dinosaurian bones in Asia were reported in 1828 from Jabalpur, close to the eastern end of the Narmada river. The bones were of the Titanosaurus indicus, a gentle and giant herbivore of the Cretaceous period.

Since then, a vast collection of dinosaur bones, nerves, teeth, claw, eggs and even dung have been found in the country.

Some of these facts come from a book called ‘Dinosaurs of India’, a 100-pager authored by veteran fossil researcher Ashok Sahni. He is the leading figure in Indian palaeontology, best known for unearthing dinosaur nesting sites in central India.

“It is a thrill that cannot be explained,” Sahni said over the phone from Lucknow. “The joy of finding something is like the joy of creation.”

His amazement at fossil digs in India is understandable. The country’s landscape is a lavish buffet of animal relics.

Its diverse fossil wealth is partly thanks to a 100-million-year odyssey. This Noah’s Ark-like trip kicked off when India chipped away from Gondwanaland, the mother continent. As India waltzed up latitudes, it underwent climatic changes. This isolation also led to a spike in animal and plant species, even a variety of dinosaurs, found only in the floating landmass.

Jabalpur has numerous deposits of dinosaur eggs and nests. The city is located along the banks of the Narmada river. It was amid the barren hillocks of this region that the British soldier William Sleeman found dinosaur bones in 1828.

More than 150 years later, Sahni stumbled upon dinosaur nests around the same spot.

“I saw these rounded bodies and they didn’t look like eggs because they were silicified. They had been covered with silica,” Sahni said. “We started searching for more and found more. One of my MPhil students was with me. He got so excited that he went back with a torch”  Sahni had spent many years on that site and hadn’t come across any dinosaur egg fossils until that day. “A lot is luck,” Sahni added. “A lot of it is perseverance.” Vishal Verma is aware of the patience it takes to find animal relics. In 2000, the fossil hunter started scanning the neighbouring town of Bagh in Madhya Pradesh.

He spent weekends cruising over 40 km of asphalt to Bagh on his motorbike. There, he did his version of a superhero flip. He shed his high-school physics-teacher garb and fastened his amateur palaeontologist cape.

Verma started looking for petrified bones, eggs, even a shard of a dinosaur-egg fossil in this prehistoric graveyard. He was keenly aware of what he should look for, as he had spent hours studying attributes of these elusive fossils.

“To identify an egg, its shell is key,” he said en route to Bagh, speaking in Hindi. “The details on the egg shell tell us whether it is a carnivore or a herbivore dinosaur. The breathing pores, its textures, its shape. If it is spherical, it is a herbivore, and if it is elongated, it is a carnivore.”

He had all these little details tucked in his head but his detective skills proved futile in finding clues in this ancient crime scene.

“He had done a lot of work and had a large collection of fossils and knew where to find them,” said Rajesh Chauhan, also in Hindi. “But there was one thing that he yearned for. He didn’t have any dinosaur fossils.”

Chauhan is a former student of Verma. He is now a forest ranger guarding Bagh’s natural history and wildlife.

A decade ago, when he was a graduate student of zoology, he got in touch with Verma for some assistance on a research paper. Chauhan was really interested in studying fossils.

It was Verma’s sixth year of dinosaur-fossil hunting in Bagh and he decided to persevere. Now, it was with Chauhan in tow.

The morning drive from Manavar to Bagh is stunning. You wheel past lush rolling hills and small fields with saplings of various crops.

“You have corn here and cotton,” Verma said. “The basalt that buried the dinosaurs now is a fertile ground for these crops.”

The Bagh Fossils Park is a 100-hectare conservatory. It was an overcast day and Verma walked down a mud-path that wound around lush mounds to sight a small pond.

Back in 2006, on a cool November morning, Chauhan and Verma chose this very spot for their fossil hunt.

“On the first day itself. We parked our bikes and came here close to the pond,” said Chauhan pointing to a waterbody at the park. “And we kept doing the rounds and I was a bit unsure because I didn’t know to identify a dinosaur egg or its shell. Then Vishal called out, ‘Come here, come here.’ It was the shell of a dinosaur egg.” 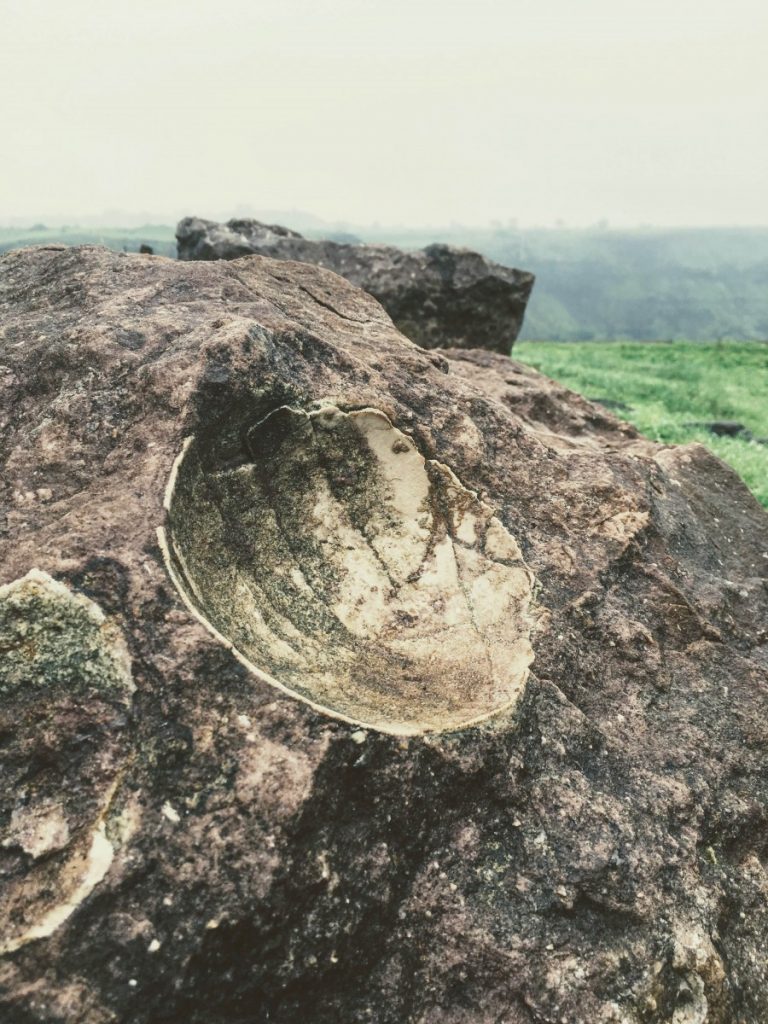 A shell of a dinosaur egg entomed in a rock at Mandav Fossil museum in Madhya Pradesh. Credit: Anupama Chandrasekaran

A while later, there was another shriek. This time it wasn’t just another shard of the puzzle. It was the actual whole: a coconut-sized dinosaur-egg fossil.

But even that wasn’t what left them clicking their heels. Over the next couple of days, they collected about a hundred petrified dinosaur eggs. It was one of India’s biggest finds.

“At that time, we didn’t have any words. Everyone’s happiness was of different degrees,” said Chauhan. “I was excited that we found dinosaur eggs. And we truly had a windfall. We were taking the eggs in sack-loads. And since we couldn’t take them on our bikes, we got a friend to bring along a van and spent a few days ferrying the dinosaur eggs to Manavar.”

It was a monumental find. A few months later, they handed the eggs over to the Madhya Pradesh government. Some of these egg fossils were deposited at a fossil museum in Mandav, a tourist town located 100 km from Bagh on a scenic plateau in the Vindhya mountain range.

But that wasn’t exactly the best decision. 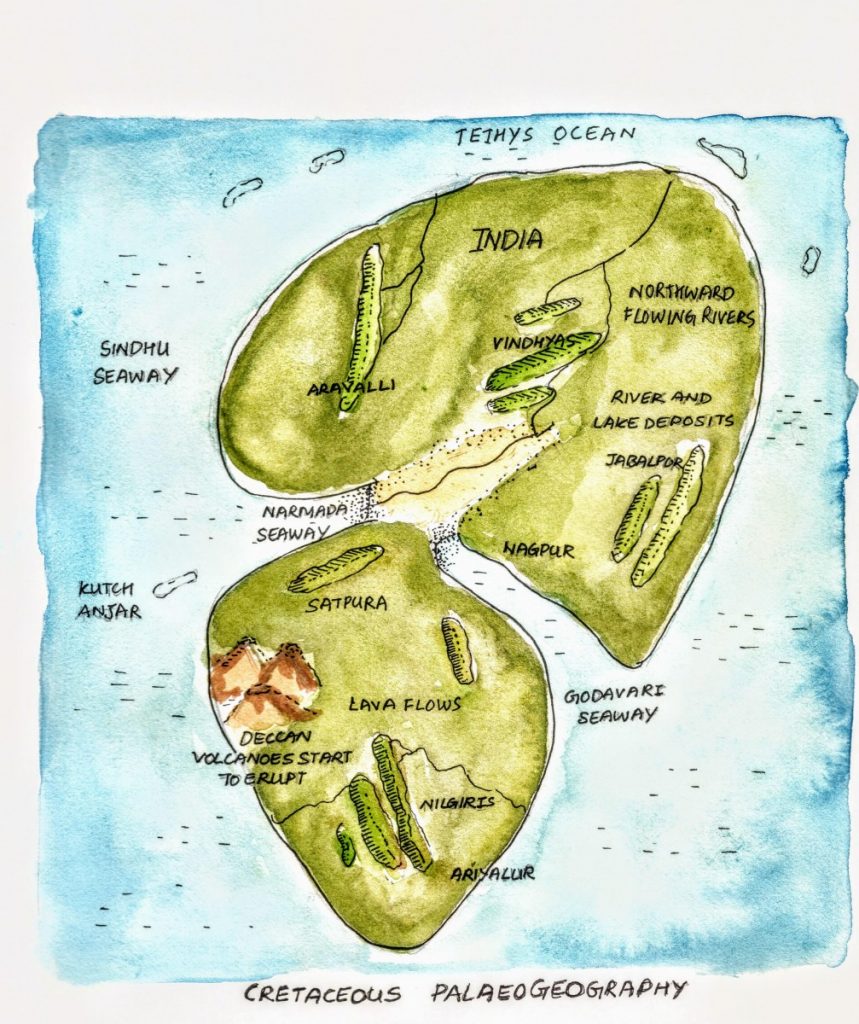 An impression of India as a floating island continent during the Cretaceous period. The illustration is a water colour version of a drawing in the book Dinosaurs of India by Ashok Sahni. Illustration: Kaavya Praveen

When Sahni and his students discovered a whale fossil in Kutch in the 1970s, it was tough to find a place to keep it safe. The seasoned fossil finder literally lugged the meter-long, brittle skull along with him wherever he went. There was always a fear of the fossil being broken, misplaced or stolen if he didn’t keep it within arm’s reach.

“Whale fossils cannot be put in your pocket,” Sahni said. “So when I shifted to another university, I had a problem, you know. How do you transport? And how do you convince your wife and family that I am going to carry these there because they are very important?”

Unlike countries like the US or even China, India doesn’t have a national repository to store fossil finds. Only this year, there has been some talk of a natural history museum in Delhi.

The damage of this lethargy is evident all over the country. Like Bagh, Raiyoli in neighbouring Gujarat was another major dinosaur nesting site. It is close to the western bank of the Narmada. But today, Raiyoli has very few fossils.

“So much of it has been destroyed and is constantly being destroyed. That’s the biggest tragedy happening around,” said Sanjay Kumar, a Delhi-based journalist working with Sahni and others to push the government to establish a natural history museum. “This spot in Raiyoli was a global hotspot, which was to be declared a UNESCO site. Nothing was done and the whole site was destroyed. It’s almost clean now.”

Verma’s find faced a similar disaster. In 2013, some of the dinosaur-egg fossils at the Mandav museum were stolen. 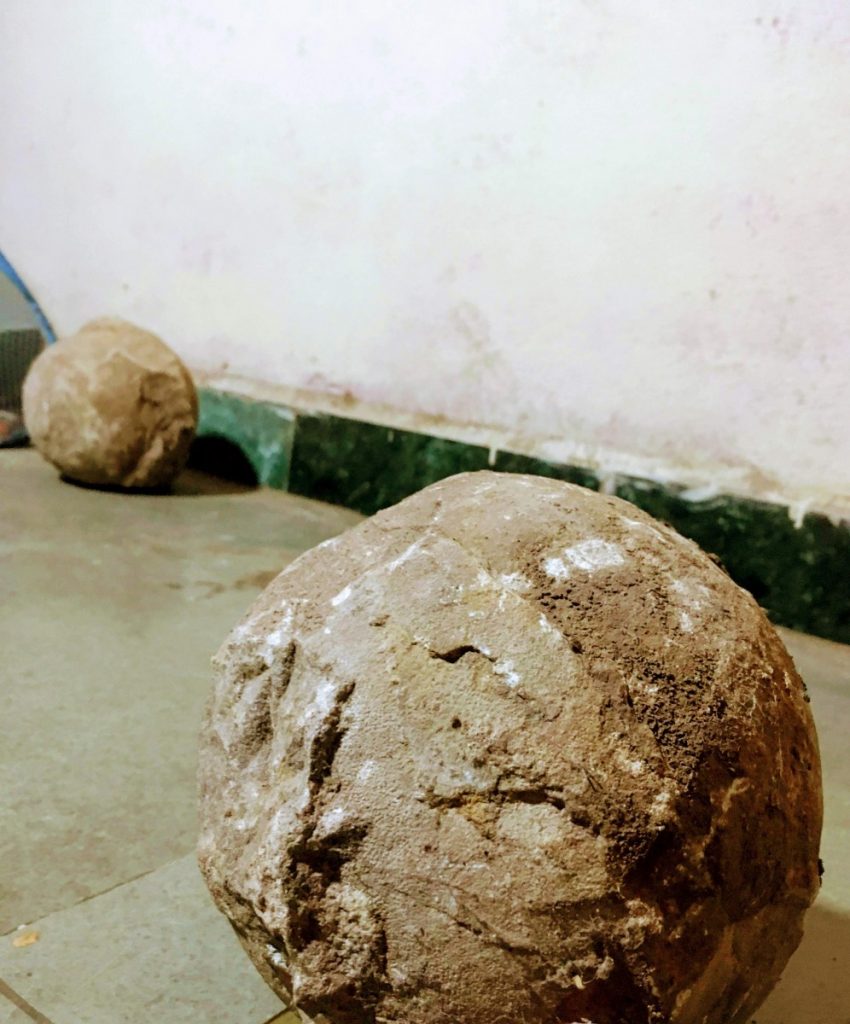 Mandav is located 50 km from Manavar, a good two-hour drive.

Enroute to the Mandav museum, Verma tried to sound optimistic and spoke of the beauty of this tourist hotspot.

“You’ll see when we go to Mandu, there will be waterfalls,” said Verma. “It will be beautiful with a light fog hovering over it.”

But he actually seemed a bit like the frugal urban van he was seated in. The vehicle groaned as it inched up the gentle slopes and grumbled through the mist.

After what seemed like a rickety roller-coaster ride, the museum came into view. It was a stunning site. The building was perched on a volcanic basalt cliff with a view of the cascading waterfalls.

A family with kids arrived as Verma walked through the gate.

They were disappointed to learn that the building containing the dinosaur eggs, a tacky egg-shaped, igloo-like structure, wasn’t open for the public. It had been locked for five years now, since the day some of the egg fossils were stolen.

Verma reveres Sahni. And now, he has started mimicking his efforts in more ways than one.

For starters, he isn’t parting with his finds – whether the beautiful cidaris he possesses or the dinosaur-egg fossils placed just opposite his closet on the floor of his home.

The curios form a part of a traveling museum that Verma pedals to educate locals and children about the region’s fossil riches. At all other times, they remain wedged in pizza-box shaped, electrical-fan cartons, safely tucked in his crummy closet.

“Some people look at fossils with amazement as a clue to the origins of life,” said Verma. “And then there are those who cannot understand why we are investing so much in a piece of stone.”

Anupama Chandrasekaran is an independent podcaster and publishes audio documentaries focusing on deep history via www.recordist-in.org.