Found: First Evidence of Radioactive Molecules Outside the Solar System

For many decades, astronomers have been familiar with gamma rays coming from aluminium-26 dispersed across the Milky Way galaxy – but specific sources have remained out of focus until now. 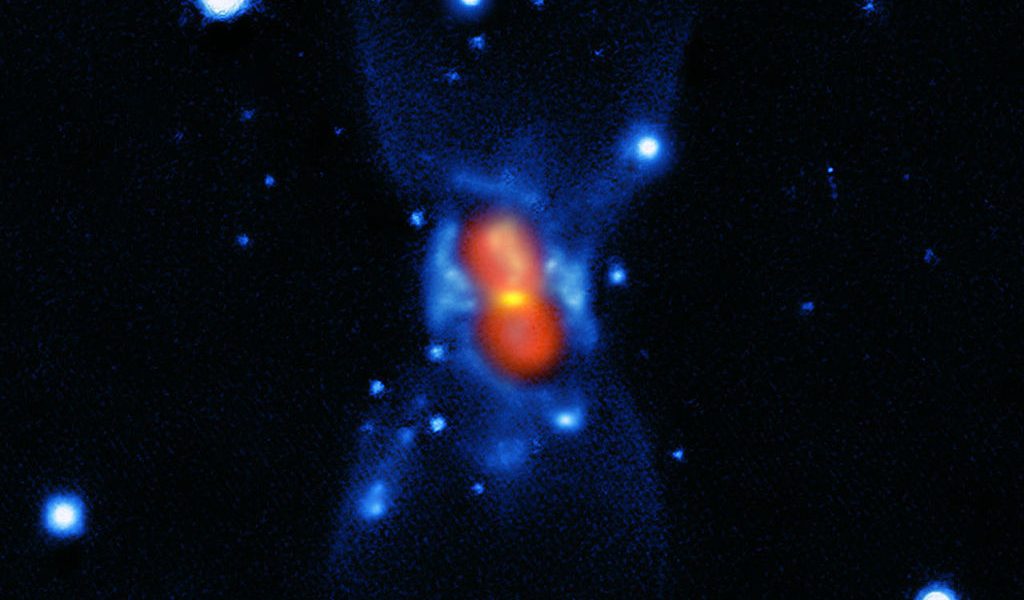 In 1670, a strange object in the night sky caught the attention of Europeans. It was very bright at first, then faded into darkness, again became bright, faded once again and went on until it finally flickered out in May 1672. Every time it brightened, its peak brightness was lower than the previous peak, suggesting that the object – called Nova Vul 1670 – was neither a planet nor a star. So what was it then?

Descriptions of Nova Vul 1670 seemed similar to that of a red nova – a class of objects involving two main-sequence stars orbiting each other, eventually colliding and merging into one new star. A famous example of a red nova is V1309 Scorpii, formed by the explosive merger of two low-mass red giant stars as observed in 2008. It was possible that Nova Vul 1670 could also be a red nova.

In 2013, two ground-based radio telescopes on Earth – the Atacama Pathfinder Experiment (APEX) in Chile and the IRAM 30-metre telescope in Spain – studied the leftover molecular gas around Nova Vul 1670 and found that it contained radioactive isotopes (most noticeably carbon-13, nitrogen-15 and oxygen-18) typically not found in normal cosmic matter. Further analysis of the observational data showed the presence of the stable aluminium monofluoride, indicating the presence of radioactive aluminium-26.

As molecules spin and tumble in outer space, they emit energy in millimetre wavelengths through a process called rotational transition. Laboratory experiments help unravel these molecules in astronomical data. However, spotting aluminium-26 monofluoride was not straightforward because its characteristic energy emissions weren’t readily known. Why? Because aluminium-26 and its compounds are not found on Earth.

One way out was to produce this molecule in nuclear experiments and then study it. The other was to extrapolate what we know of aluminium-27 monofluoride using computer calculations to determine what the emission of aluminium-26 monofluoride could look like. The former option would have been very expensive, so the scientists went with the latter, and it paid off. This is a unique feature of their work, published on July 30.

Aluminium-26 is thought to be produced in massive stars and classical novae (when a star becomes brighter for a short period by around 5-15 powers of 10). However, the observational characteristics of and the abundance of carbon, nitrogen and oxygen isotopes around Nova Vul 1670 did not match with what was expected of massive stars and classical novae.

Instead, astrophysicists found its case could be explained using red giant stars – stars in their twilight years that have expanded considerably to cool themselves down. A single, undisturbed red giant is known to produce a substantial amount of radioactive aluminium close to its core. However, dredging it to the surface could only be possible if the red giant star collided violently with another star. And this could have happened in the case of Nova Vul 1670.

The observation of aluminium-26 monofluoride molecules in the envelope around the newly formed star 348 years after the collision supports this conclusion: that Nova Vul 1670 is a stellar-merger remnant of a binary that contained a red giant star.

For many decades, astronomers have been familiar with gamma-rays coming from aluminium-26 dispersed across the Milky Way galaxy – but specific sources have remained out of focus until now. This is the first time that a definitive source of aluminium-26 has been identified beyond our Solar System.

Unstable isotopes possess an excess of nuclear energy that they shed by emitting gamma-ray photons and so ‘decay’ into a less-radioactive and more stable form. In the current case, aluminium-26 decays into magnesium-26 by emitting a gamma-ray photon.

Since the ALMA and NOEMA instruments can only detect aluminium-26 present in its molecular form (26AlF), astronomers expect there could be more aluminium-26 around Nova Vul 1670 than the scopes have revealed.

The study also emphasises that there could be other astronomical sources of aluminium-26 in our galaxy. To its credit, it also highlights how telescopes like ALMA and NOEMA are technologically capable of searching for these sources with a higher angular resolution than gamma-ray observatories can.