Each new discovery Kepler made took us a step closer to understanding the development of our own Solar System. 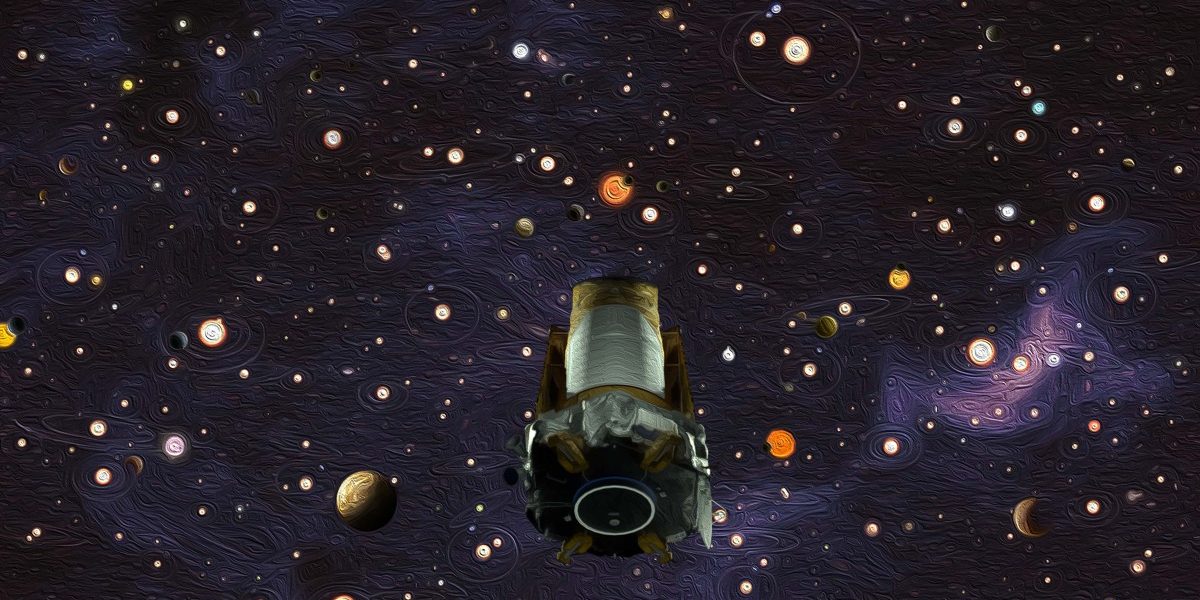 NASA Kepler against the backdrop of outer space, with an oil-paint filter. Credit: NASA

NASA has called time on its iconic Kepler Space Telescope. It was the most prolific planet-hunter ever engineered by humans, and it out of fuel after nearly a decade of amazing discoveries. The timing of NASA’s bidding Kepler goodbye – November 15, 2018 – coincides with the 388th death anniversary of Johannes Kepler, the German mathematician discovered the laws of planetary motion. It was after him that the doughty little spacecraft was named.

Launched in 2009, Kepler trailed Earth as it orbited the Sun, peering into deep space to confirm what scientists always believed: that planets are strewn like chaff across the universe and most stars have planetary systems of their own. But now, with no more fuel left to scan the depths of outer space and send data back to Earth, Kepler becomes just another abandoned spacecraft wandering in a heliocentric orbit, over 156 million km from Earth. NASA says the chances of it ever approaching Earth are practically nil. The spacecraft turns on its own axis while going around the Sun, tracing a path that will slowly take it away from Earth’s orbit into space.

Kepler leaves behind an astonishing legacy. It spotted more than 70% of all known exoplanets, planets beyond our Solar System, orbiting distant stars. Since astronomers began to discover exoplanets less than 30 years ago, over 4,000 exoplanets have been listed – and counting. Of these, Kepler discovered more than 2,600. Indeed, Kepler’s arrival in the heavens revolutionised planet hunting, with the Milky Way galaxy yielding unmistakable proof of its stars teeming with multi-planetary systems.

Also read: The Story of Dust, Through Space and Time

In fact, crowded planetary systems seem to be the rule rather than the exception. Kepler’s findings suggest that nearly half of all stars visible in the sky probably have rocky planets about the size of Earth and, more importantly, orbiting in the ‘habitable zones’ of their host stars. For a planet to be habitable, it must be far away from larger ones – whose gravitational pull could eject it from the system – and from its parent star, or it could be burnt. Earth, for instance, would have been like hot and choking Venus if it were a little closer to the Sun, or like cold, arid Mars if a little farther from it.

The surface of a planet that falls within the habitable zone of a star is able to sustain liquid water, provided there is adequate atmospheric pressure. This is called the Goldilocks zone, after the fairy tale in which a little girl chooses from sets of three items. She rejects those that are too large, too small, too hot or too cold, and picks the one in the middle that is ‘just right’. A quarter of all stellar systems discovered thus far could potentially have such Goldilocks zones.

Kepler’s chief mission profile was to look for alien worlds in ‘habitable zones’ where life, in any form, could exist. The gravitational tugs of planets circling a star induce a wobble in the star’s orbit, and astronomers zero in on the planets by studying the star’s orbital motion. Another favourite technique is the transit method, which depends on a simple but powerful principle. Whenever a planet crosses, or ‘transits’, the face of a star, it blots out a small fraction of starlight, causing a fall in the apparent stellar brightness. To an astronomer, these small regular dips in the star’s magnitude represent the telltale signs of planets that would otherwise be too small to detect.

Significantly, Kepler’s findings indicate that potentially habitable worlds are more common around cold, small red-dwarf stars whose habitable zones seem to be closer to the host star. As a result, such planets have shorter orbits and transit their stars more often, which make it easier for astronomers to study them. Taking their cue from this, astronomers are increasingly narrowing their search for Earth 2.0 to near red dwarfs.

Also read: What Have We Learnt About Exoplanets From the Kepler Mission?

Thus, each new discovery Kepler made took us a step closer to understanding the development of our own Solar System. More importantly, it increased manifold the possibility of finding extrasolar Earth-like planets. Even the detection of a single planet waltzing with a star is significant. Once the proto-planet is formed, it destabilises other rubble orbiting the parent star and prompts the formation of more sister planets – not unlike the way our own Solar System came into being.

Of late, astronomers have found more and more evidence of planets in the dim netherworlds around candidate stars. Dusty discs, comprising protoplanetary material, seem to backlight these stars. The ionising radiation that streams from the hot stellar interiors likely warms these discs and provide energy for planet formation. Since these discs appear to remain stable for millions of years, it is possible for planets to form by agglomeration – one tiny dust grain sticking to the next, and the next, until eventually they build up a whole new world.

Exobiology, the study of the possibility of life on alien worlds, and related sciences are based on these foundations. They take for granted the idea that planetary life depends on the warming rays of a nearby star. It will be a while before exobiologists are able to analyse the treasure trove of data that Kepler leaves behind on the possibility of life in other solar systems of the Milky Way galaxy’s 100 billion+ stars, and the billions of galaxies elsewhere in the universe.