Elephants Living Around Humans Should Be More Stressed, Right? Well…

A new study suggests that if people chase and shout at an elephant all its life, without hurting it, it becomes used to it and doesn't get agitated. A herd of elephants feeding near a tea estate. Credit: Sreedhar Vijayakrishnan

Herds of elephants cross fields of tea as they wend their way from one itsy-bitsy patch of forest in Valparai, Tamil Nadu, to another. The huge animals stand out from the short-stature vegetation for all the passersby to see. Crowds gather to watch them, and they are often not well-behaved. They may yell, throw stones or honk their vehicle horns until the animals go out of sight.

Why do wild animals put up with us? They could move away from the area. That option is often not available. Instead, they learn to live with us by avoiding some parts of the areas they frequent even if that means giving up good foraging habitat. If they cannot yield space, they change the time when they are active, becoming nocturnal.

Researchers expected that elephants forced to live amongst people would be more stressed compared to ones living in forests.

Although stress seems to be a bad thing, it is an essential biological defence. When faced with a threat, it triggers our response: stay and fight or turn tail and flee. The heart beats faster, lungs pump rapidly, glucose surges into the bloodstream and muscles suffuse with blood so they are energised and ready for action.

Our body’s preparations are coordinated by cortisol, a glucocorticoid popularly called ‘the stress hormone’, produced by the adrenal glands that sit on top of the kidneys. Elephants are no different from us. In fact, all vertebrates produce steroidal hormones. Without these secretions, they would be dead.

But too much stress could be a health hazard. How are biologists to determine anxiety levels in wild animals? Capturing them for blood tests is itself stressful. So instead of drawing blood to test for the stress hormone directly, they opt for a proxy. During periods of stress, the body produces lots of the glucocorticoid that gets metabolised and excreted with its waste.

Sreedhar Vijayakrishnan, now at the National Institute of Advanced Studies, Bengaluru, observed six bulls and four herds with adults, half-grown youngsters and calves in the tea, coffee, and cardamom plantations of the Valparai plateau. Although he came across plenty of dung, he couldn’t collect them.

“I had to watch the animals defecate before I collected the samples to ensure I knew whose samples were being collected,” Vijayakrishnan says. But the elephants have to leave the area first before he could scoop up samples. Often, they continued to browse on leaves and wouldn’t move away after pooping. If they didn’t give Vijayakrishnan a chance to collect dung within a two-hour window of time, it couldn’t be used. 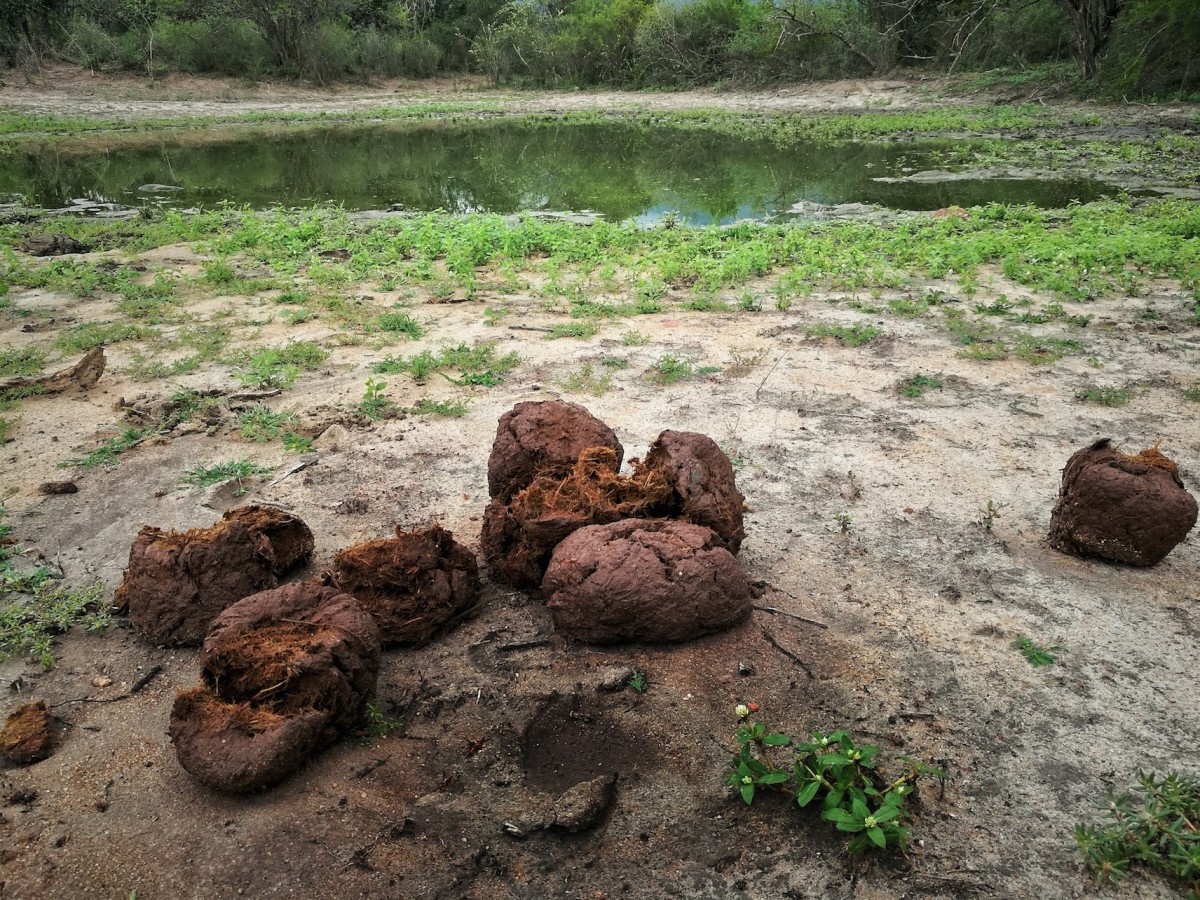 Back in the laboratory at the Centre for Cellular and Molecular Biology, Hyderabad, his research collaborators extracted and measured the metabolised residue, called metabolites, of the hormone. This method doesn’t bother the animals and provides a snapshot of their stress levels.

He also collected dung samples of a herd living in the neighbouring Vazhachal Reserve Forest. Since these elephants didn’t run into people, their stress profile offered a comparative standard.

“It is a little tricky to call it the ‘ideal’ baseline, but in comparison with the elephants of Valparai, we know that the individuals in Vazhachal had hardly any exposure to external stressors,” says Vijayakrishnan.

The findings from these 69 elephants are a surprise and run contrary to expectations. The concentration of excreted glucocorticoid in the estate-living elephants was not all that different from the forest-dwelling ones.

What explains the Valparai giants’ lack of stress? Or were the Vazhachal elephants under similar duress as their estate counterparts?

Vijayakrishnan says in his observations that the forest elephants didn’t show any behavioural symptoms of stress. But they could have been under some pressure even though they gave no outward signs, suggests Prithviraj Fernando, an elephant biologist at the Centre for Conservation and Research, Sri Lanka. He is on Vijayakrishnan’s PhD committee but wasn’t involved in the study.

Vijayakrishnan and his collaborators have another explanation: the Valparai elephants have adapted to people since the plateau was settled a century ago. When they spot their two-legged neighbours, they stop browsing and become alert – but they don’t turn anxious.

Stress is a subjective experience, says Fernando. “For example, the first time you experience someone shouting at you, your stress hormones probably shoot up. However, if you experience this on a daily basis, after a while, it becomes less stressful.” Until, finally, it is not stressful anymore.

The state of calmness varied with age and sex. Adults had higher levels of metabolites than other age groups. Among adults, bulls seemed to be more stressed than females, possibly because they are solitary animals. Having one’s family around seemed to have a calming effect. Some of the bulls were in musth at the time of the study which could be another reason for the higher levels. But there could be other factors such as body condition, rank in the social hierarchy, and how much forage they could access.

Glucocorticoids not only coordinate the stress response but also in controlling daily usage of energy. Ee Phin Wong, an assistant professor at the University of Nottingham Malaysia Campus, suggests that it’s possible the bulls in Valparai require more glucocorticoid than cow elephants for their routine daily activities. 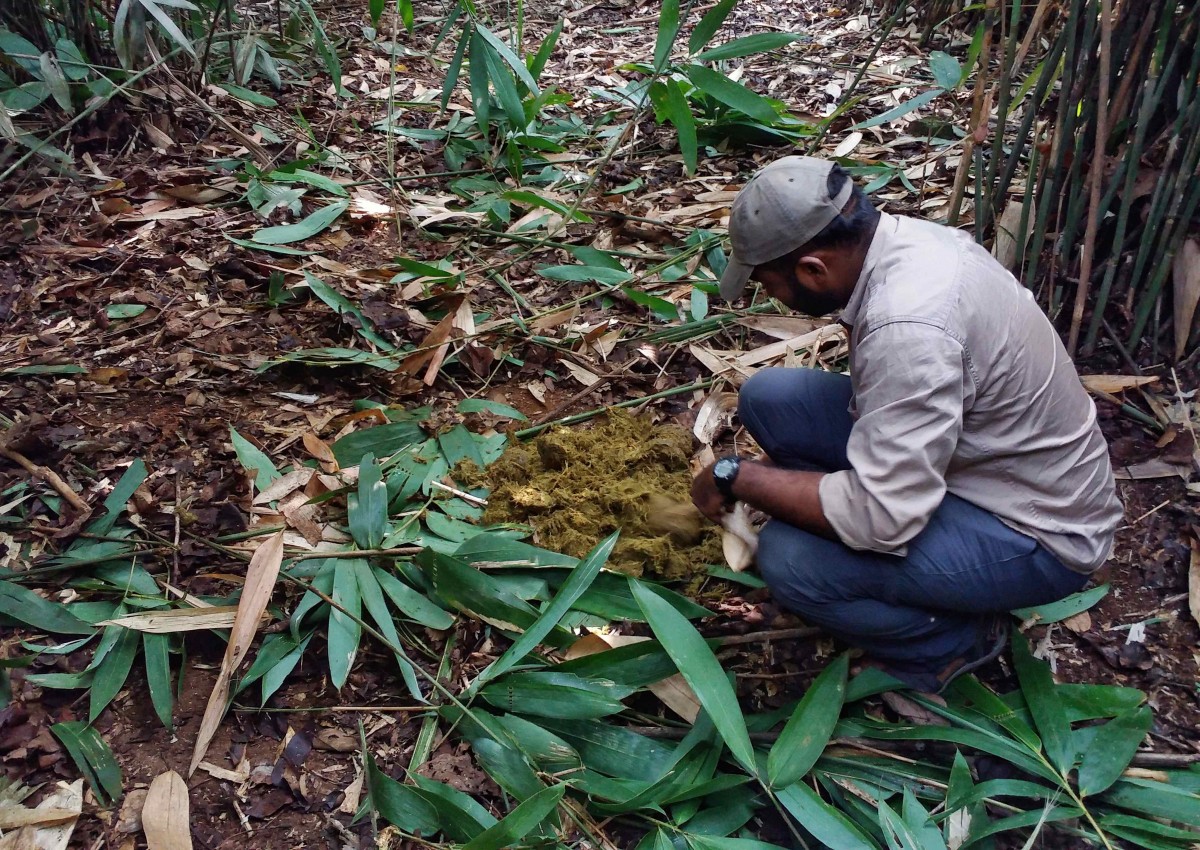 African bull elephants in Kenya also have high cortisol residues because they often ventured into crop fields and had confrontations with humans. But in Valparai, bulls are few and keep their heads down. Herds of cow elephants, however, are more often attracted to banana trees in backyard gardens and rations stored in shops and schools.

When such herds don’t leave the estate area quickly enough, people hurry them up with firecrackers and heavy vehicles. The disturbed animals trumpet, quicken their pace, and stick close to each other. Vijayakrishnan collected dung samples after such drives for analysis.

As expected their glucocorticoid metabolite levels were higher than average. Adults generally, and bulls specifically, seemed to get more agitated. Since cow elephants have youngsters to worry about, they may experience more stress. The ones that seemed to panic the most were the calves. Drives made their stress hormone levels shoot up more than 100 % higher than usual. The authors suggest calves may react dramatically because they haven’t experienced anything so distressing before in their young lives.

Once they have had a moment to relax, their hormone production slows and cortisol levels stabilise.

When such drives become frequent, the acute stress in elephants becomes chronic. In Assam, for instance, drives can last a few days with the animals withstanding high levels of cortisol through the entire period. Starvation and injuries could be other causes of sustained stress, points out Fernando. Intense pressure for long stretches of time makes mind and body suffer.

We become irritable, confused, sleepless and, in severe cases, depressed. When we internalise it, our bodies pay the price – tension headaches or muscular pain, digestive disturbances, heart attacks and impotence.

Chronically stressed elephants may suffer compromised immune systems and lose their appetite while being sapped of their energy. They lose body condition and become incapable of having calves.

The authors call for sustained monitoring of stress levels in elephants living amongst people. Wong agrees, “It is difficult to study stress physiology in wild elephants, and we need more field studies such as this” to understand how human activity disturbs wildlife.

Despite the hazards of fieldwork, studying glucocorticoids in wild Asian elephants is not a simple science yet.

Biologists have to figure out what the metabolite levels mean. For her PhD thesis, Wong compared cortisol residues in two groups of elephants – ones that had been captured and trucked to far away forests and others that continued to live as before. Relocated elephants would be incredibly stressed at finding themselves in strange surroundings and their metabolite levels ought to have been high. But Wong found that even a year later, they were lower than the relaxed ones. She concluded that these low levels of cortisol for an extended period would be bad for the elephants. “Of course, if the levels were increased, one would also conclude they were stressed and it was not good,” Fernando says.

With more studies, biologists would also learn how to interpret the readings and suggest ways to minimise stress in wild elephants.

The study was published in the journal General and Comparative Endocrinology on May 17, 2018.