Did you know an equinox forces GEO satellites to contend with the longest period of darkness in their orbits around Earth? 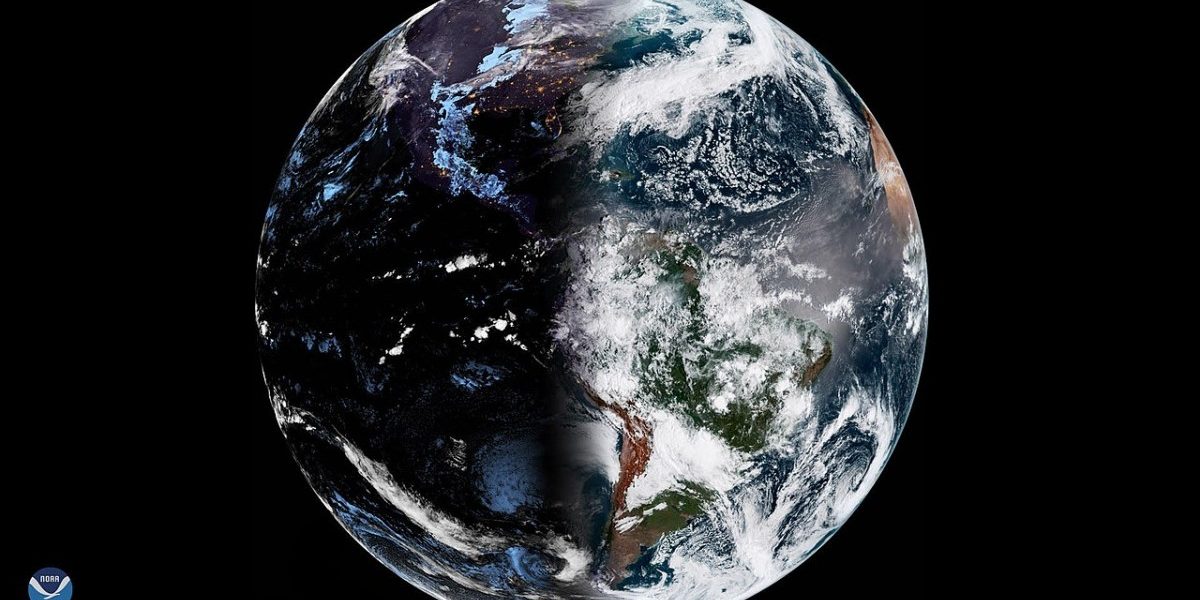 Earth as seen by the NASA GOES satellite on the vernal equinox in 2019. Photo: NOAA

At 1.20 pm (IST) today, it will be the autumnal equinox of 2019. You might not make much of this moment on the calendar: the date on which day and night will be equally long. But this date is more interesting than it seems at first glance because the application of simple geometrical concepts can, and does, yield multiple tidbits about this occasion.

Today, the Sun will have an ecliptic longitude of 180º relative to Earth and the line dividing day and night on Earth will be perpendicular to the equator. The ecliptic is the plane on which the Sun appears to move around in Earth’s sky. The ecliptic longitude measures the extent to which the Sun’s position on the ecliptic deviates from the central direction, which marks the Sun’s position on the vernal equinox (March 20, 2019). On the autumnal equinox, this deviation is 180º. This definition is only valid in the northern hemisphere, however. In the southern hemisphere, it is flipped: the autumnal equinox happens in March and the vernal, or spring, equinox in September.

The ecliptic longitude provides a geometric definition of the equinox that the label itself doesn’t quite capture: although days and nights are technically supposed to be equally long on the equinoxes, the moment doesn’t actually come to be thanks to distortions caused by Earth’s atmosphere. Observers can see daylight before the Sun rises over the horizon thanks to atmospheric refraction, so daylight has a natural advantage. Because the extent of refraction is greater than the Sun’s diameter, the star could appear to be above the horizon when in fact it is not at all. Scientists have estimated this effect adds 7-8 minutes of daylight at the expense of ‘night’ at the tropics, increasing all the way up to 24 hours at the poles.

Further, today, the Sun’s centre as seen from Earth will be directly over the equator, and the subsolar point – the location at which the star is directly overhead – will move further south after this moment until late December. The star will also appear to rise due east and set due west. In fact, the point from which the Sun will rise in the east will be exactly in the middle of the two distended points between which it rises throughout a year.

There could be some days on which days and nights are equally long but anticipating them is tricky because daytime depends on the observer’s latitude, longitude and altitude, and Earth’s speed around the Sun. Such an endeavour is also trivial in the sense that the effort to perform the intricate calculations and arrive at the perfect moment is not matched by its significance, at least for scientific studies. There is a more recent coinage called equilux to refer to equally long periods of light and darkness on a single Earth day.

The equinoxes have traditionally been associated with various religious festivals. In Hinduism, for example, Ugadi roughly coincides with the vernal equinox and Navaratri with the autumnal equinox. The vernal equinox is also associated with Nowruz and the autumnal one with Kōreisai. According to the Talmud, the equinoxes and solstices are the days on which angels protecting water change guard, leaving the liquid unwatched for some time and during which it becomes poisoned. Similar superstitious beliefs make the rounds in India and advise fasts and the avoidance of certain foodstuff. There is of course no scientific basis for such claims but often enough financial basis.

Also read: This Is No Way to Remember P.M. Bhargava and Yash Pal

Because of the nodal nature of the Sun’s positions in the sky on the equinoxes and solstices, scientists record the dates on which these days occur to help calibrate the locations of various astronomical observations. The equinox dates are also of consequence for communications satellites in the geosynchronous equatorial orbit (GEO).

The GEO is a circular orbit 35,786 km above Earth’s equator. Satellites in this orbit have an orbital period of 24 hours and in the same direction as Earth. Because the subsolar point is directly over the equator on the equinoxes, these satellites fly directly between the Sun and Earth. Seen another way, a ground antenna pointed to the satellite to receive its signals has to contend with the Sun dominating the background on an equinox, flooding the antenna with its radiation and triggering large amounts of noise.

Additionally, Earth casts its largest shadow of sunlight on the equinox relative to other days. During these ‘eclipse seasons’, the amount of shadow increases towards the equinox over 22 days, peaks at the moment of the equinox and then decreases over the next 22 days. At the equinox itself, GEO satellites have to be prepared for 72 minutes of continuous darkness – the longest such period in a year and during which they need to shift from using solar cells to energy stored in lithium-ion batteries for power.

In case you’re wondering what sort of point this article could be approaching after 800 words: it’s just interesting, you know?