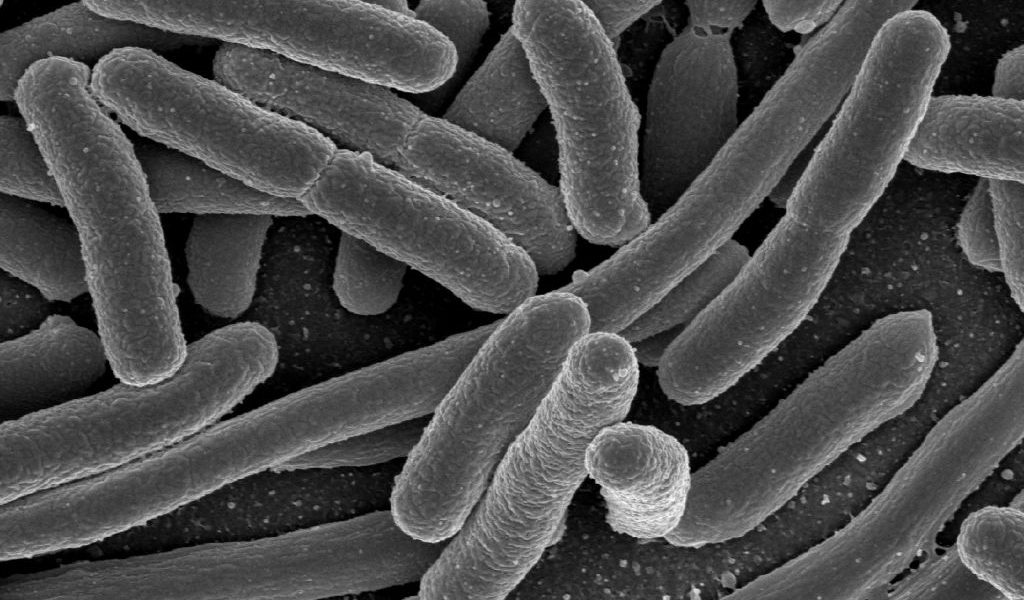 Escherichia coli, a bacterial species present in the human gut, as seen by a scanning electron microscope. Photo: US NIH 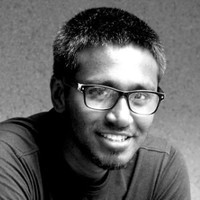 A new study has found that microbes living in the gut could cause autism spectrum disorders (ASD). Researchers found that when bacteria from the faeces of humans with ASD were injected into mice, the latter developed autism-like symptoms. This gives us hope that we could treat ASD with simple dietary supplements called probiotics.

All probiotics are simply concentrated liquids with a very large number of ‘good’ bacteria that, when consumed, colonise the intestines and neutralise ‘bad’ bacteria. They have been shown to help with many intestinal disorders. However, there is now a growing body of evidence that probiotics could also help treat anxiety, depression, multiple sclerosis and Alzheimer’s disease. How could bacteria living in our guts have an impact on brain disorders?

And why do we have so many microbes, anyway? The intestines harbours about 100 trillion bacteria, which is 10-times more than the number of ‘human’ cells in the human body. The entire colony of all kinds of microorganisms living in the gut, including about 1,200 species of bacteria, is collectively called the microbiome. They participate in mutually beneficial relationships with the human host called commensalism.

In exchange for the human gut providing them with a nice, cool, nutrient-rich living environment, they confer a host of advantages to the human body. For example, they protect the gut against intestinal injuries, regulate metabolism, help the gastrointestinal tract develop properly and help absorb nutrients. In fact, it would be safe to say that we humans wouldn’t be able to live the way we do without them, and that if the microbiome is unhealthy, the human is going to be unhealthy as well.

We have come to understand that the gut microbiome is an integral part of being human. Even so, it may not be immediately clear how bacteria in the stomach could affect the brain, which is physically far away and protected from most microorganisms by a layer of cells around it called the blood-brain barrier. The bacteria in the gut are themselves enclosed in the intestines by a layer of cells.

How do the gut and the brain manage to communicate?

The gut and the brain

To answer this question, we need to understand how the nervous system communicates with the gut. The digestive system possesses some (obvious) dense nerve connections with the brain because eating, digestion and excretion are all complex behaviours and the brain has to orchestrate them with care. The gut also sends signals back to the brain about when it is empty and when it has an infection, etc.

There are a group of molecules that behave like messengers to make all this back-and-forth possible, called neurotransmitters. These chemicals move from one cell to another by crossing a small bridge between the two (called the synapse), and their movement across the neurons is akin to the transmission of a signal.

Sometimes, however, the gut bacteria produce molecules that are similar to the neurotransmitters and which can interfere with normal signalling. As a result, these microbes can hijack the signals of the nervous system and affect our behaviour.

Studies of the role of gut microbes were revitalised when scientists developed a way to raise germ-free mice in the lab. These mice were sterile; even their guts had no microbes. The character and composition of the human microbiome depends on diet, region, genetics and other physiological factors, so the sterile mice provided a way to understand how the presence or absence of gut microbes could affect the body as a whole. 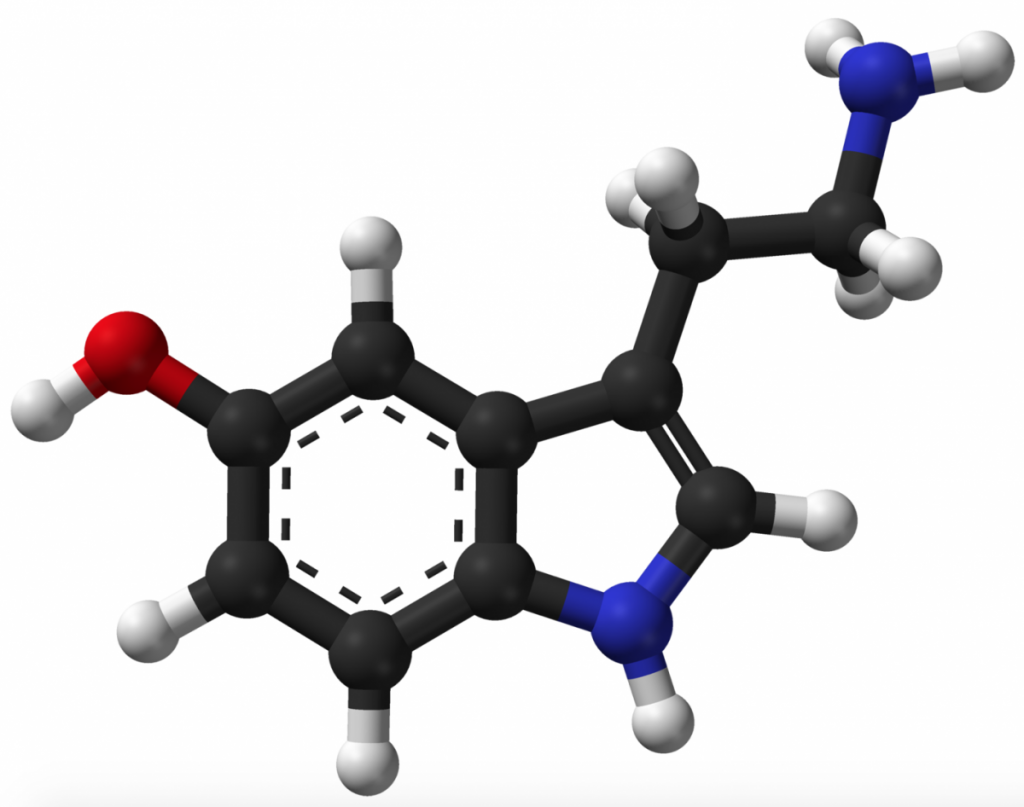 Serotonin, a neurotransmitter involved in feelings of wellbeing, is produced in the gut. Credit: Benjah-bmm27/Wikimedia Commons

Autism is effectively a spectrum of disorders: the ASD. It presents itself in the first three years after birth and has lifelong repercussions. Individuals with ASD show repetitive behaviours, impaired language skills, etc., and have trouble pulling off normal social interactions.

Although ASD has a strong genetic component, scientists don’t fully understand its causes. They suspected gut microbes could be involved when some children showed symptoms of ASD after an antibiotic course and then chronic diarrhoea.

In 2000, scientists reported in a paper that vancomycin, an antibiotic, briefly ‘suppressed’ autism’s symptoms. By 2010, others had found that children with ASD also had gastrointestinal problems and, in 2013, that the bacterial species in their gut microbiota differed from those of normal children. The metabolites (substances secreted by microbes that could interfere with brain functioning) found in the faeces, serums and the brains of children with ASD were also different from those of children without ASD.

In 2016, a study led by Sarkis Mazmanian, a medical microbiologist at the California Institute of Technology, found that symptoms in mice with ASD could be reversed with an oral dose of ‘healthy’ bacteria. This ground-breaking finding further strengthened the connection between gut microbiota and autism.

However, whether gut microbes were the sole cause of ASD remained unclear. For one, scientists induced ASD in the mice in Mazmanian’s study by injecting their pregnant mothers with a substance that triggers an exaggerated immune response.

In the latest study, published in May 2019, scientists injected germ-free mice with faecal bacteria from humans with ASD. Soon, these mice developed the hallmark symptoms of ASD: heightened repetitive behaviour, fewer ultrasonic sounds that mice emit to communicate with each other and decreased locomotion.

Twenty-seven of their 313 metabolites in faeces and serum were also different, and of the 313, two – 5-aminovaleric acid (5AV) and taurine – were also present in lower quantities. These two molecules are neurotransmitter agonists: their molecular structures resemble that of the GABA and glycine neurotransmitters, and they interfere with the latter’s functions.” As it happens, both GABA and glycine, help the brain develop normally.

And when the scientists injected the mice with 5AV and taurine, the rodents developed ASD-like symptoms. Ergo, bacteria probably interfere with brain functions using these molecules.

Also read: Why Knowing What Autism Looks Like in Children Is More Necessary Than Ever

These metabolite molecules cannot directly affect the DNA, but they can affect the RNA, which is an intermediate product when a gene produces proteins. Mouse with ASD were found to have an altered RNA profile compared to normal mice, especially in genes implicated in ASD in humans.

This study leaves with the intriguing hypothesis that gut microbes cause ASD, possibly bringing us closer to understanding autism’s causes.

We are also slowly coming to terms with what the ‘normal’ microbiome looks like, and the profound influence it can have on brain states and human behaviour. These studies are also improving our knowledge of microbes in general, which has thus far mostly been put together by studying diseases and epidemics. Finally, we’re also discovering the extent to which substances as unassuming as probiotics can improve the quality of life.

(However, probiotic interventions in humans still have a way to go as there is no consensus about which bacterial population can provide the required intervention. This is because the gut microbiome varies so much depending on geography, age, etc.)