Scientists extended the idea behind a discovery made in 1981 – and combined it with an insight from the US presidential elections. 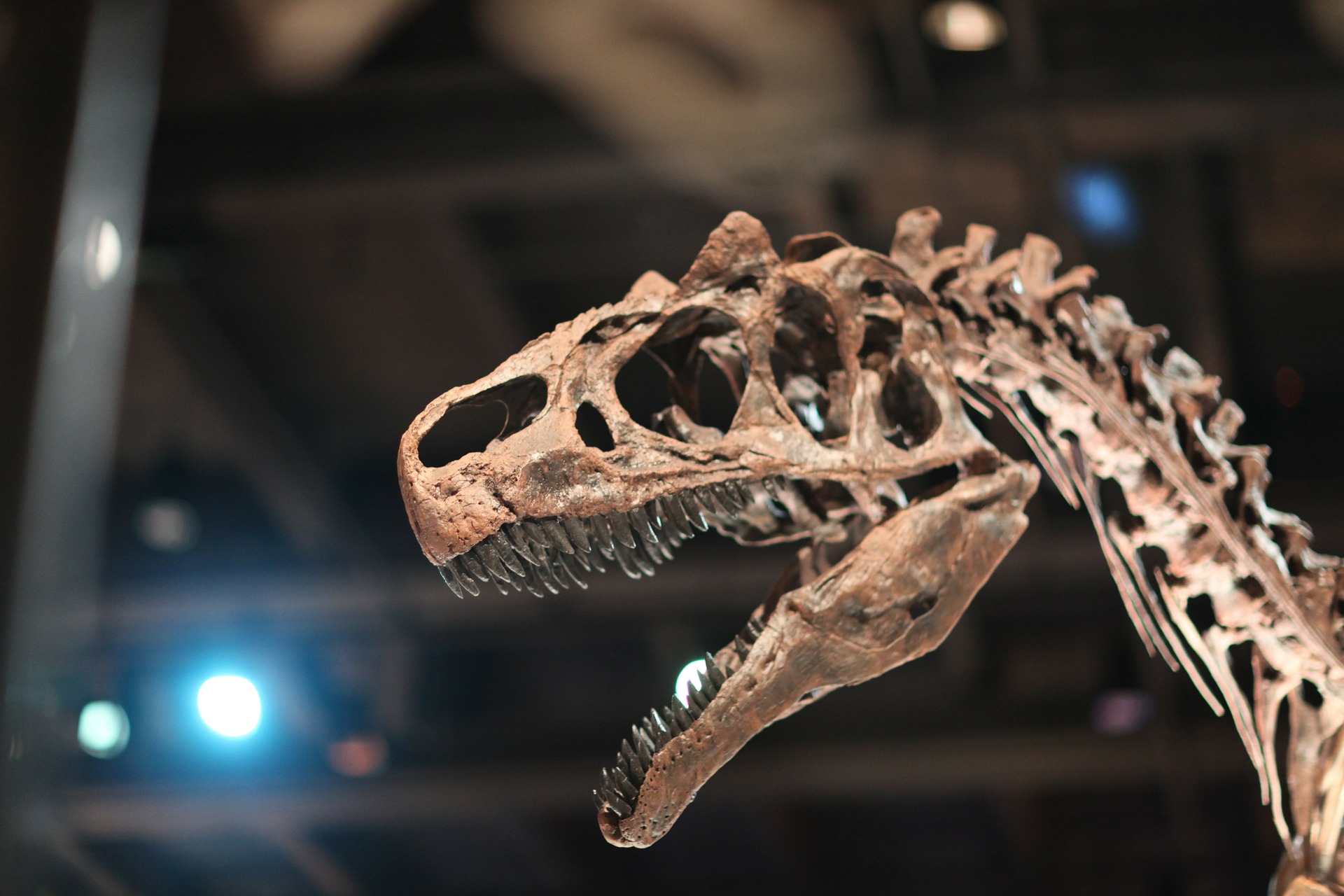 Like good old Greek drama, the history of life on Earth has five acts – and each of them has been bracketed by mass extinctions. Each mass extinction wiped out more than 50% of plant and animals at the time.

In the past, scientists have used the fossilised remains of these poor creatures to learn how life has evolved through time.

But Andrew Knoll, a professor of Earth and Planetary Sciences at Harvard University, Cambridge, believes that only analysing the number of species that disappeared or emerged after mass extinctions is simplistic. “This approach also disregards changes in ecology,” he told The Wire.

The study of ecology and ecosystems deals with how organisms interact with each other and with their physical environment. Together with the fossil record, such knowledge provides a new perspective on evolution. This has prompted many scientists to try and accommodate these changes in different ways-  like assigning a number value to ecological changes. For instance, the appearance of a new reef can be allotted a number – say, 1 – while plants establishing themselves in a new environment (thought to have a stronger ecological impact) is assigned a higher number, say 3, and so forth.

Such attempts have not lived up to their potential because there is no established hierarchy for measuring ecological changes – so there’s a problem of scale. Additionally, all these effects can have wide-ranging impacts given the time over which they materialise. It thus becomes difficult to compare the ecological changes between different eras.

All in the numbers

A team of researchers from Harvard University, Cambridge, Rensselaer Polytechnic Institute, New York and the Carnegie Institution for Science, Washington DC, has now found a way around this problem. Their solution is rooted in the works of Jack Sepkoski, an American palaeontologist who used fossils datasets to unravel patterns in the evolution of life.

In 1981, Sepkoski had discovered that three groups of animals dominated marine ecosystems at different points in Earth’s history. He found that the number of organisms within these three groups remained constant for long periods of time, until they were decimated by mass extinction events and replaced by animals of a new group.

During a mass extinction, the number of animals in each group underwent drastic changes. Sepkoski referred to these groups as ‘evolutionary faunas’. In 1981, he postulated that changing ecosystems can be defined by changes in the population of theses faunas.

“Different animals can dominate an ecosystem under different ecological conditions,” Drew Muscente, a postdoctoral researcher at the Department of Earth and Planetary Sciences, Harvard University, and the lead author of the new study, told The Wire.

For instance, about 521 million years ago, animals with external skeletons first appeared on Earth. They flourished in marine ecosystems along with certain worms and simple hard-shelled animals collectively called ‘small shelly fossils’, about 485 million years ago.

Then their populations started to decline, and corals and large-headed animals like squids and octopuses came to dominate the scene. Still later, following the Permian-Triassic mass extinction about 250 million years ago, marine communities largely consisted of snails and slugs, hard-shell animals like clams, oysters and scallops, and bony fishes and sharks.

Drawing upon this idea, researchers set out to check if changes in community dynamics could somehow correspond to the ecological severity of an event.

Most fossils are found buried within sedimentary rocks. These rocks are formed when layers of sand, minerals and other sediments cement together over time. Scientists can trace the rocks’ origins by studying the different minerals they contain. This subsequently helps determine when and where which animals lived in the past, Muscente explained. The guiding principle: “Only those species that co-occurred in the same place and time would have been able to interact.”

The scientists tracked changes in the marine animal community throughout the Phanerozoic eon. This period spans the last 542 million years, during which virtually all animals evolved.

They downloaded data on fossils from a central database and used network analysis to study interactions among ancient organisms. “This technique is not new, but it is the first time that it has been applied to assess the entire range of fossil records,” Knoll said.

Using this approach, researchers were able to forge all known and probable interactions among marine animals  that lived thousands of years ago. This revealed a network (see image below) within which the fossils appeared to have organised themselves in clusters. Each fossil of the marine animal was represented by a dot and the interactions among any two species, by lines. 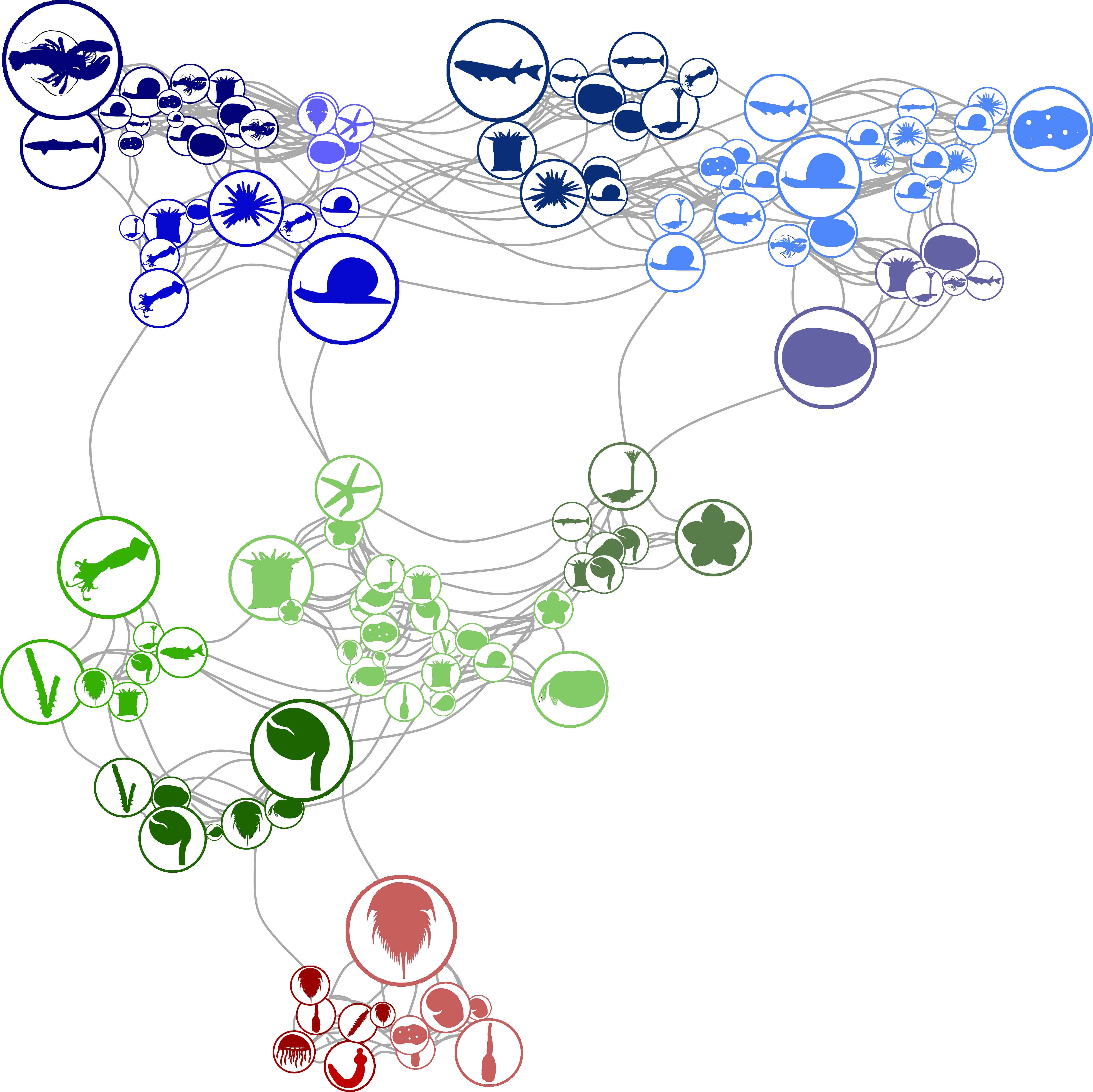 The oldest fossils bundle at one end of the spectrum while the youngest forms dominate the other end. Because the grouping is based on co-occurrence,  it is safe to assume that the authors have identified ecological communities, Niranjan V. Joshi, a former faculty member at the Centre for Ecological Sciences, Indian Institute of Science, Bengaluru, told The Wire.

The team then dug deeper into these associations. Unlike Sepkoski – who could could only study biodiversity changes within faunas – the researchers explored finer networks of association between fossils. They determined how families and orders of animals had changed over time and found that, apart from Sepkoski’s three marine faunas, there were five other groups of ancient animals – or palaeo-communities – that could serve as indicators of ecological change.

Here, the change in the number of animals within each palaeo-community in a given time-frame reflects the period’s ecological impact – “a metric called the swing factor,” according to Muscente.

He came up with this measure while thinking about the recent US elections. “I noticed that successive elections introduced huge changes in the proportions of conservatives and liberals within the Congress. Each election resulted in some degree of electoral swing: the greater the degree of this change, the greater the political impact.”

By applying this logic to ecosystems, the researchers developed a scale to measure the amount of ecological change. They reasoned that, just like in the elections, a large impact would cause larger changes among members of the five palaeo-communities. The swing in their representation would then reflect the intensity of change.

Joshi, who was not involved in the study, believes that this is a new and interesting way of characterising the impact of mass extinctions. The researchers’ calculations show that the Permian-Triassic event had the largest swing.

That this event was the most severe extinction episode in Earth’s history is also supported by evidence from other fields. Studies have shown that as many as 96% of all species may have become extinct during this event, including synapsids, the giant lizard like ancestor of reptiles and mammals that walked on all fours. Although there is still some debate about the exact percentage of species that were wiped out, the fossil record indicates that life on Earth nearly ended at the end of the Permian period. The smaller subset of animals that survived went on to conquer Earth.

Using the swing factor, palaeontologists can now compare the ecological impact of the Permian-Triassic extinction event with others.

In the same vein, the team found a large swing in diversity during the Devonian period about 360 million years ago. According to Muscente, its impact was “as intense as the extinction period that wiped out the dinosaurs.”

However, the Late Devonian extinction is not considered to be an extreme event. Extinction during this period transpired during a prolonged phase of sea level rise. This change likely led to a loss of habitat and may have facilitated the introduction of invasive species into various environments around the world. While it sounds subtler than an asteroid attack or volcanic activity, it is important to understand that this period of ecological change lasted for 50 million years. By contrast, other drastic extinctions occurred over 10 million years. So the ecological impact of the Devonian era could have been intense – if not rapid.

“This is an interesting point! To me it suggests if conditions for life are ‘only’ moderately bad, but persists for a long enough time, they could have the same effect as a severe ‘one-time’ blow,” Steffen Kiel, an expert in deep-sea ecosystems at the Swedish Museum of Natural History, Stockholm, told The Wire. “That such a thing didn’t happen more often indicates that the conditions on our planet were conducive to life for most of the Earth’s history.”

But with humans in the picture, this these patterns might no longer hold.