2018 Medicine Nobel Prize: Who Are James Allison and Tasuku Honjo?

Allison's and Honjo's work focuses on proteins inside our bodies that hold the immune system on a leash.

The Nobel Prize for Physiology or Medicine has been awarded to James Allison and Tasuku Honjo “for their discovery of cancer therapy by inhibition of negative immune regulation.” This extends the record of Lasker Award-winners – Allison in 2015 – going on to win a Nobel Prize for medicine.

Allison is American and Honjo, Japanese.

Their field of work is called cancer immunotherapy.

Allison’s and Honjo’s work focuses on proteins inside our bodies that hold the immune system on a leash.

Allison found that a protein called CTLA-4 was responsible for holding T-cells back. So by forcing CTLA-4 to go easier on the T-cells, the T-cells could be released with greater effect to combat diseases.

Honjo’s work is concerned with a protein called CD279, also known as programmed cell-death protein 1 (PD-1). Similar to CTLA-4, the PD-1 protein suppresses the action of T-cells against the cells of one’s own body. This action prevents autoimmune disorders – but also prevents T-cells from fighting cancer cells. By selectively blocking the action of PD-1, T-cells can be unleashed to fight cancer cells.

CTLA-4 and PD-1 inhibitors received major validation in two studies in 2010 and 2012 respectively. In fact, scientists found that the body’s immune system could fight off even advanced stages of some cancers, including melanoma. 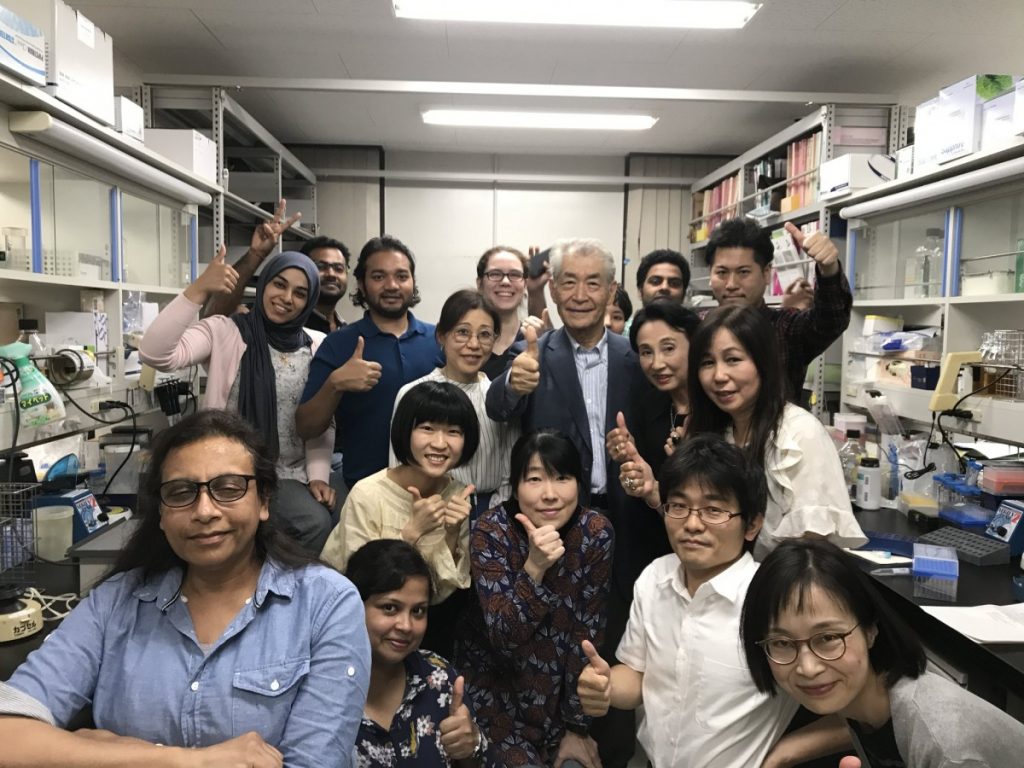 Tasuku Honjo surrounded by his team at Kyoto University, immediately after news of his winning a Nobel Prize was announced. Credit: @NobelPrize/Twitter

In 2015, Allison gave an interview to Scientific American, in which he explained the significance of his work and how it differs from other cancer treatments that typically target the tumours. Excerpt:

Traditional cancer therapies are typically drugs that attack the mutations causing the cancer. That’s a good idea but there are a few problems there including the fact that the tumour becomes resistant to the drug. What we call “checkpoint blockade” therapy – the immunotherapy we’re talking about here – differs in a few ways. We get the immune system to attack the process of carcinogenesis itself. Checkpoint blockade actually employs T cells to affect tumour cells. … Then, once you have T cells, unlike with chemotherapy or radiation, there is memory. You have T cells for the rest of your life, so if the tumour reoccurs, those T cells can mobilise themselves again against the tumour. The last difference is adaptability. Since your immune system is a dynamic thing, if the tumour changes, the immune system can change its response as well. (emphasis added)

The outcome of their work has allowed the development of certain drugs that enable the body’s in-built immune system to fight certain types of cancer. For example, Nivolumab is used to treat melanoma, lung cancer, head/neck cancer, etc. Pembrolizumab is used to treat melanoma and lung cancer. Drugs that combine CTLA-4 and PD-1 inhibitors are expected to be even better.