Woodstock 50 Music Festival Is Back After Winning Court Ruling

Woodstock 50, planned for August 16-18 in New York state, was thrown into doubt last month after its Japanese investors announced that they had decided to “cancel the event". 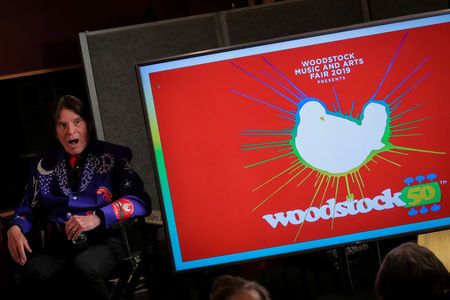 Singer John Fogerty speaks during the announcement event for the lineup for the Woodstock 50th Anniversary concert in New York, March 19, 2019. Credit: Reuters

Los Angeles: Organisers of a three-day concert marking the 50th anniversary of the Woodstock music festival said on Wednesday the show was back on after winning a court ruling against a lead investor.

Woodstock 50, planned for Aug. 16-18 at the Watkins Glen motor racing venue in New York state with a lineup that includes rapper Jay-Z, and pop singer Miley Cyrus, was thrown into doubt last month after Japanese investors announced they had decided to “cancel the event.”

New York State Supreme Court Judge Barry Ostrager on Wednesday ruled that Amplifi Live, a unit of Japanese company Dentsu Inc, “does not have the right to unilaterally cancel the Festival.”

“Woodstock 50 is on! We can’t wait to bring this important event to the public this summer,” Gregory Peck, one of the owners of Woodstock 50, said in a statement after the decision.

Ostrager in his ruling cast doubt, however, on whether the festival could still proceed. He wrote that “it appears it is no longer feasible to conduct the festival,” and declined to order the return to the organizers of $17.8 million that Amplifi has withdrawn from the Woodstock 50 bank account.

Dentsu said in a statement that while the court had ruled that Amplifi Live could not unilaterally cancel the festival “at this time we do not intend to further invest in the festival.”

Woodstock 50 is backed by the co-producer of the 1969 Woodstock festival, which was billed as “three days of peace and music” and is regarded as one of the pivotal moments in music history.

Amplifi said the event was plagued by delays in obtaining permits, arranging security, water supplies and sanitation. A mid-April sale date for tickets was postponed and has yet to be rescheduled.

Woodstock 50 announced in March that more than 80 musical acts, including 1969 festival veterans John Fogerty, Canned Heat and Santana, would take part. Some 100,000 fans were expected to attend and camp at the Watkins Glen site, but the court documents said that number of tickets had been reduced to 60,000.