His many self-portraits provide a fascinating account of how he coped with the many demons that tormented him.

The Vincent van Gogh print that hangs on our living room wall is a self portrait that I had bought at a museum store many years ago. I didn’t know then that this was the last of Van Gogh’s many self-portraits, or that, among major artists, perhaps only Picasso and Rembrandt did more self-portraits than Van Gogh.

Now, Picasso lived to be nearly 92 and Rembrandt 63, while Van Gogh’s life was all of 37 years long. And that short life was not a happy or a particularly fulfilling one, either: till his last days, Van Gogh wasn’t sure if he was getting anywhere as a painter.

And yet, he painted himself again and again during the most productive years of his life. For admirers of Van Gogh’s work, therefore, it is important to try and locate his nearly 40 self-portraits in his personal history.

The first surviving self-portrait is a drawing done soon after Van Gogh arrived in Paris in February 1886. The last, painted while he was at the asylum in Saint Remy, was completed in September 1889. (There happens to be another claimant to this ‘last portrait’ tag, also painted in September 1889, but more on that later.)

After Van Gogh moved to his last port of call – Auvers-sur-Oise, near Paris – in May 1890, and during the few remaining months of his life, he never again made himself the subject of another portrait.

So his self-portraiture was confined to a three-and-a-half-year period out of the ten or so years he was productive as a painter. Of this period, again, his time in Paris (approximately two years) accounts for a large majority (29) of his self-portraits.

Stylistically, too, this period saw him evolve at a frenetic pace: from the dark, sombre hues of his pre-Paris days, his palette now became increasingly lighter and sunnier, and he began to work around many different tonal compositions in his self-portraits also.

The transition clearly parallels Van Gogh’s journey from The Potato Eaters (1885) to Starry Night over the Rhone (1888). If anything, from now on, he was to use brighter shades and strikingly bolder backdrops for his self-portraits as well.

But Paris, the bustling metropolis, had begun to get on his nerves and Van Gogh longed desperately for the peace and quiet of the countryside. In February 1888, he moved to Arles, in France’s sunlit south where his canvas erupted in a riot of brilliant colours. The Sunflowers series, The Yellow House and the many magnificent frames capturing harvest and ripe wheat-fields came to life. He did not do too many self-portraits while here – not more than six or seven – but, in dramatic quality and in the range of his palette, these portraits stand out from the rest.

In December 1888, Van Gogh quarrelled violently with his friend Paul Gauguin as the realisation sank in that the artists’ colony that he had so fondly hoped to set up in collaboration with Gauguin was to remain a mirage. He felt a mad urge to kill Gauguin, and was filled with horror and self-loathing when later he calmed down.

In anguish, Van Gogh clipped off a portion of his right ear himself. The two portraits that he made of himself in shimmering yellow and splendid green in January 1889 show Van Gogh with his bandaged right ear. He mustn’t have found it easy to do these paintings, but he did not shrink from the job. Indeed in one of these canvases, he even introduced a lively Japanese motif so dear to his heart in his last years. 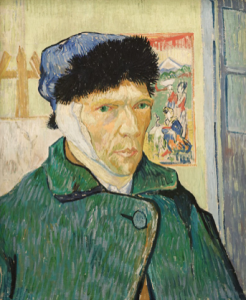 Self-portrait from January, 1889, after the tragedy

That brings us to this question: why did Van Gogh opt for himself as his own subject so often during these years? A part of the answer has to be found in the answer to the broader question: why do painters explore the medium of the self-portrait, generally speaking? Why does the artist choose to be his own client, sitter, and viewer?

Possibly because this is the most direct mode of communication the painter can visualise between himself and his viewer. Here. the artist leaps off the canvas to meet the gazer’s eye, and he hopes that the viewer will give to the image the same degree of attention, and empathy, as he himself did when he was working on it. By merging his own identity with the viewer’s, the artist also stands outside of himself for a while, thus freeing himself, however fleetingly, from the pensive self-absorption that so often takes hold of his personality.

Since the story of Van Gogh’s life is widely known, it is not difficult to see why he, more than many other artists, felt the need keenly to stand outside of himself, to look at himself through others’ eyes.

“I’d love to know what I am the larva of,” he once wrote to Emil Bernard, and his self-portraits hold the key to this process of self-exploration. Through frequent portraits of himself, he renewed the searching gaze at himself, unceasingly, almost obsessively.

Was he really ‘mad’, as others often thought he was, as even his friend and comrade, Paul Gauguin, saw him as, in that famous, but troubling,  portrait that Gauguin made of Van Gogh in Arles  in December, 1888 – Van Gogh painting Sunflowers?

As there was no getting away from this disquieting question, Van Gogh looked at himself again and again, in different situations at different points in time, each canvas presenting a different version of himself. Verisimilitude, or visual realism, never being his goal in his own work, he was searching for his inner core, for ‘what he was the larva of’, and not just what he looked like. That must be why no two self-portraits look even remotely similar, or are painted in the same colour code.

“It is said – I believe it very willingly – that it is difficult to know oneself,” Vincent wrote to brother Theo. He goes on to say next: “(B)ut it is not easy either to paint oneself”.

As hard as it must have been to do these self-portraits even as he was tormented by self-doubt – even as, indeed, disaster stared him in the eye – Van Gogh held his brush steady and innovated ceaselessly as he sat before the mirror to fix his own image on canvas. Even as he was getting back upon his feet after a dreadful attack of his disease, his mind worked with surprising lucidity as he drew his own picture.

He was remarkably calm as he stood before his easel in this period, even though repeated attacks laid him low and drained him of all energy for weeks on end. But, this capacity for staying focussed, for regaining the lucidity of thought and calmness of mind once the threatening storm-clouds had passed, seemed to have abandoned him in his last few months at Auvers.

Here, he painted with feverish energy, but his restlessness often got the better of him. His compositions sometimes appear to lack their poise, his lines their steadiness, and even quiet and restful subjects such as Cottages at Cordeville and The Church at Auvers look as though they are being jolted, convulsed by some elemental power. The whirling, dizzy shapes and lines speak to the creeping sense of hopelessness that was overpowering  Van Gogh, and probably he could not bring himself to take a steady look at himself in the circumstances. It is not surprising that he did not produce a single self-portrait in this period.

The recourse to himself as the subject may partly have been prompted by another, more humdrum circumstance as well – Van Gogh’s inability to engage live models. He was always strapped for cash – Theo’s generous and steady help notwithstanding – and his reputation for an irascible temper never made it easy to get someone to sit for his paintings.

Critics have also noted some interesting traits in his self-portraits that can be traced to how he painted himself. Since he looked at himself in the mirror while he painted, what he had before him was a reversed image of his subject, the left side having been swapped with the right. Since he was rarely looking for verisimilitude, this hardly bothered him.

But the method left its mark in the finished product: thus the buttons on his jacket/coat often appear in his portraits on the ‘wrong’ (left-hand) side (while the flap appears on the right side). It has also been noted how, in the few self-portraits he made after he left Arles, he never again showed his face full-frontally or except in the left profile: the damaged right ear must have been too painful a memory to be countenanced with equanimity.

I had begun by talking about the print in my possession which I would very much like to believe is of the last self-portrait from Van Gogh’s oeuvre. Alas, there is another claimant: a painting, done in the same month as the one I have a print of – September 1889, which Van Gogh gave to his mother as a birthday gift.

It is not known for sure which of these two canvases predates the other, but the clean-shaven, somewhat-stocky Van Gogh we come across in this other painting is not a very familiar sight to Van Gogh aficionados because this canvas is now part of a private collection. 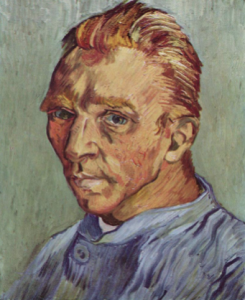 The other self-portrait from September, 1889.

Let us take a parting look at my Van Gogh (see lead image) – the ‘original’ self-portrait from September 1889. The flowing, pulsing forms of the background – reminiscent of The Starry Night – are not just ornamental. Unconfined by a fixed rhythm or pattern, they overflow onto the subject itself, in a sense becoming part of the subject, suffusing it with intensity and a fierce mobility.

The artist’s figure and even his head are painted in close-packed, coiling and wavy lines similar to the ones dominating the background. The restless rejection of harmony and tranquillity to which these snaking and swirly lines attest, sets the keynote of the painting: a sense of vitality and strength. It looks as though Van Gogh has had enough of examining his own features for signs of madness and has decided to get on with his work, with his life.

Referring to this portrait in a longish letter to Theo written on September 5/6 1889, he had this to tell his brother:

I am even inclined to believe that the portrait will tell you better than my letter how I am, and that it will reassure you – it took me a lot of trouble.

Van Gogh had made up his mind to take things as they came. Meanwhile, he would work on regardless, for

There is no remedy (for his condition), or if there is one, it is to work with a will.

In all his self-portraits, but especially in this one, his primary effort was to come to terms with this unalterable fact of his life.

Anjan Basu freelances as literary critic, commentator and translator. He can be reached at basuanjan52@gmail.com.