The Ugly Side of Wildlife Tourism

Kirsten Luce's photographs focus on the problems with 'selfie tourism'. 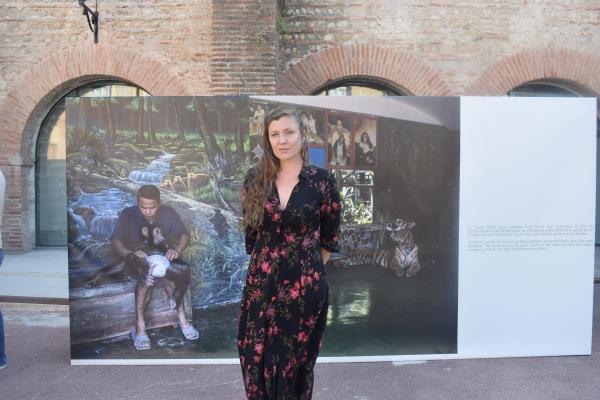 Kirsten Luce at her photo exposition 'the dark side of wild life tourism' in Perpignan, September 5, 2019. Photo: RFI/Anne-Marie Bissada

With the growing popularity of Instagram and the “selfie” has come the search for the ultimate photo.

People have even died trying getting the ultimate photo.

Now a growing industry offering access to animals in wildlife sanctuaries is emerging as the latest trend on social media.

“Without a doubt, the demand for this type of photo, to sit down next to a wild animal and have your photo taken, has grown exponentially because of social media,” says Kirsten Luce, an American photographer whose work previously concentrated on Latin American migrants in the state of Texas.

While working on a project in Brazil, Peru and Colombia on the rise of selfie tourism, Luce realised just how big a problem it was.

She felt more research was needed and decided, along with her reporter, to focus on Thailand and Russia. 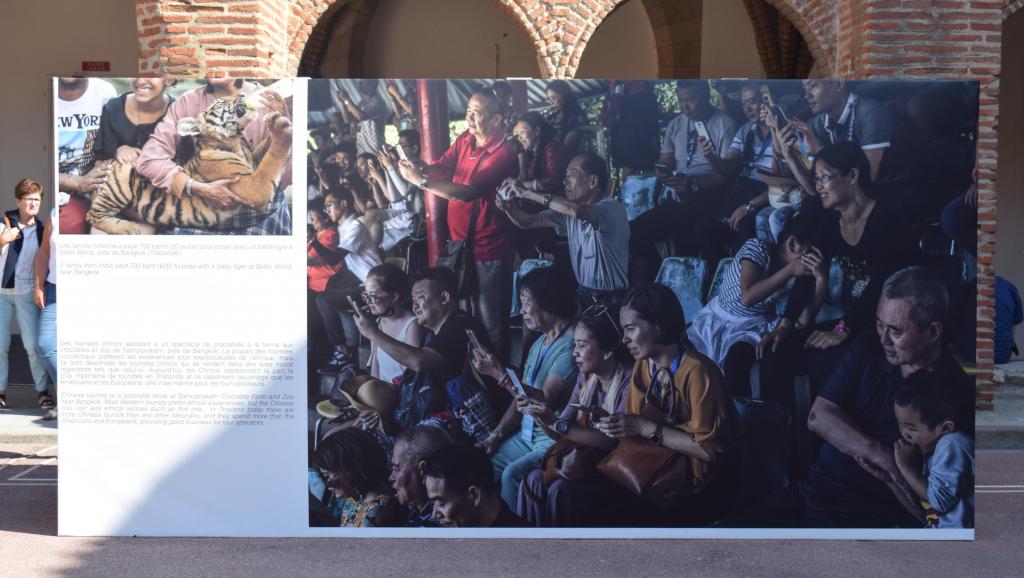 “We were looking at where native species were exploited for the entertainment of tourists,” Luce explains on the sidelines of her exhibition at the Visa pour l’image photojournalism festival in Perpignan, France.

“In Thailand, everybody goes looking for an experience with the Asian elephants. They also have a lot of tiger experiences, so that was an obvious choice.

“Since we had already looked at a lot of tropical places, we wanted something tonally and texturally different. In Russia we found that travelling marine mammals are exploited at a large number as are bears and even polar bears.” 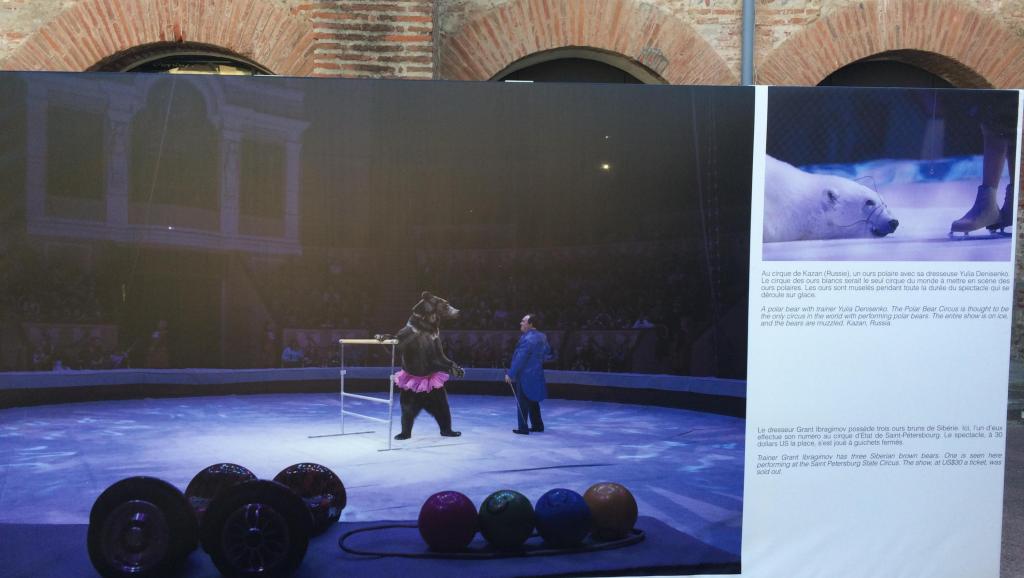 It’s a topic that hits hard through its raw imagery.

Many people at the expo took the time to talk to Luce about what she saw and how they can help.

“With a project like wildlife tourism, I think because people have never really seen the topic tackled, they are universally responding by condemning it,” she says.

“I’ve never produced a body of work that has gotten such an emotional response from virtually everybody. Everybody wants to do something to stop it and I’ve even had people say to me, how are you able to sleep at night, it must be the hardest thing to witness?”

Access to elephants, tigers, bears and dolphins was not difficult – precisely because these venues are made for the public. 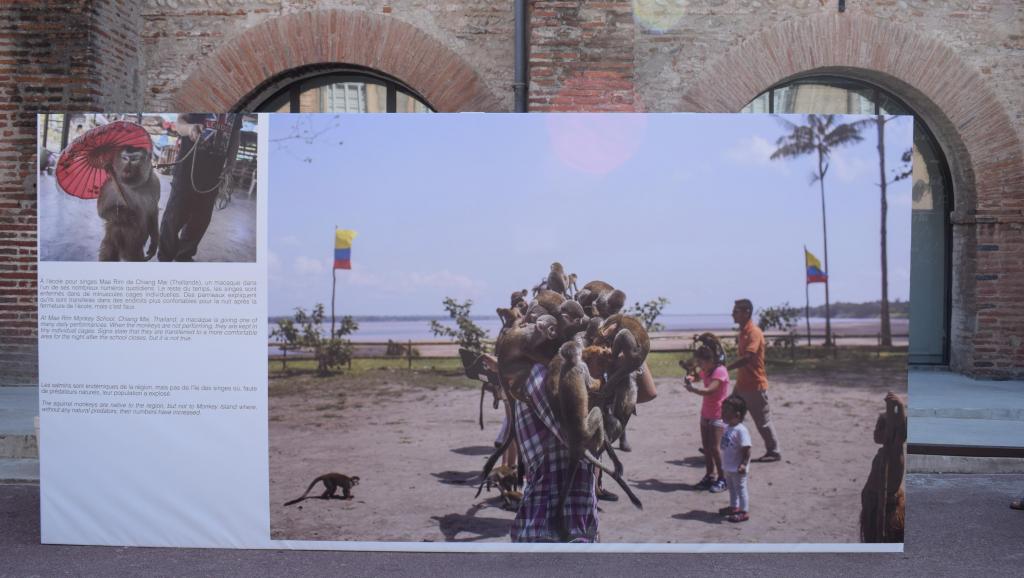 But prior to visiting the sanctuaries, Luce and her reporter met former trainers, veterinarians and animal rights activists. They would explain how the animals were often mistreated or prepared before an audience to look healthy, especially if tourists were visiting an “ethical” venue such as those offering bathing with elephants.

“The animal rights activists and trainers that had turned away from the field would give us tips and clues as to what to look out for in behaviour, and also whether or not teeth or claws had been removed,” explains the photographer. 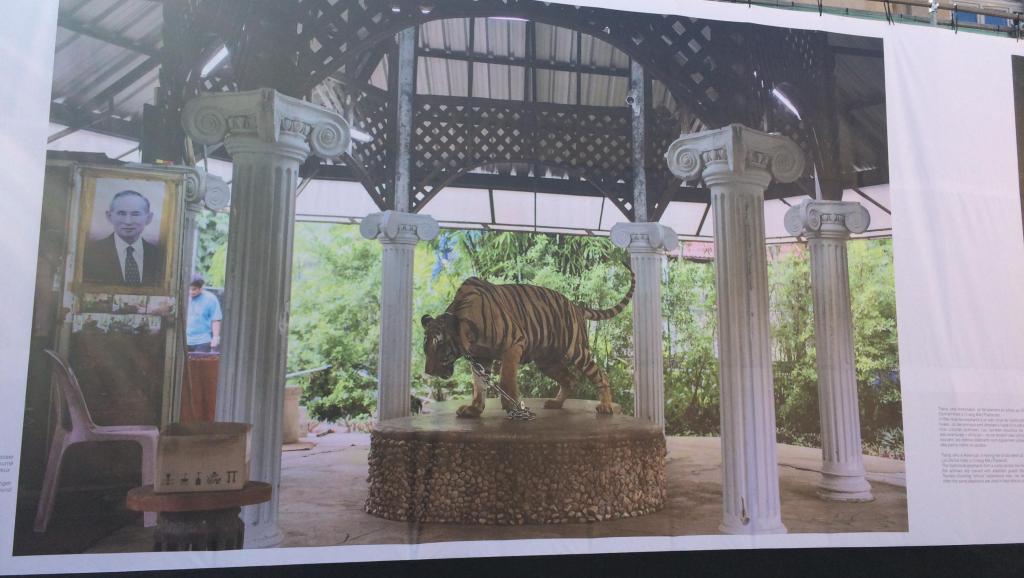 Image of a chained tiger seated on a platform in Kirsten Luce’s exposition. Photo: RFI/Anne-Marie Bissada

The beauty of photography is in capturing a moment in time – and how that moment can make an instantaneous connection with viewers.

In an elephant sanctuary in Thailand, one such photo brought about change.

“It was clear he needed vet care,” says Luce about the young elephant that was kept away from the public because he had a broken leg. “They claimed they were treating him.

Also read: The Story of How the Orphaned Tigress of Bandhavgarh Was Rehabilitated

“We had a fixer go back a couple of times to check on him – he would be in the exact same position. We knew that the elephant was not getting the care he needed.

“That photo got a lot of movement. There was a lot of pressure, and he was finally purchased and moved to a sanctuary,” Luce says, adding that it was a rare occurrence of a happy ending.

But the owner of the wildlife centre has many more elephants there, and the wider industry continues to thrive, catering for wildlife consumers.

In Russia, a burgeoning industry has kept photographer Olga Barantseva busy, fulfilling people’s desire to pose with a big bear.

Barantseva has nearly a hundred thousand followers on Instagram.

During her time in Russia, Luce says she attended a workshop where 12 new photographers were being trained in the art of bear portraiture.

Stepan, the bear used in Barantseva’s photos, was a former circus bear, likely abused into submission, says Luce, which would explain his apparent docile nature that allows him to pose with humans.

Also read: What Happened to the Women in Photography?

Another phenomenon Luce experienced in Russia was the travelling dolphin shows.

“These marine mammals are living and performing in inflatable tents, almost like a circus would come to town for six weeks,” she says. “These belugas and dolphins would be living in tanks for six months.”

The travelling shows do not provide proper water filtering or medical attention, which almost certainly leads to premature death, and to keep up numbers, fresh stock is replaced illegally through poaching in the Black sea, according to Luce.