An annual festival in Miraj keeps the Ustad's legacy and a tradition of secularism alive, in a time when communal passions rage. 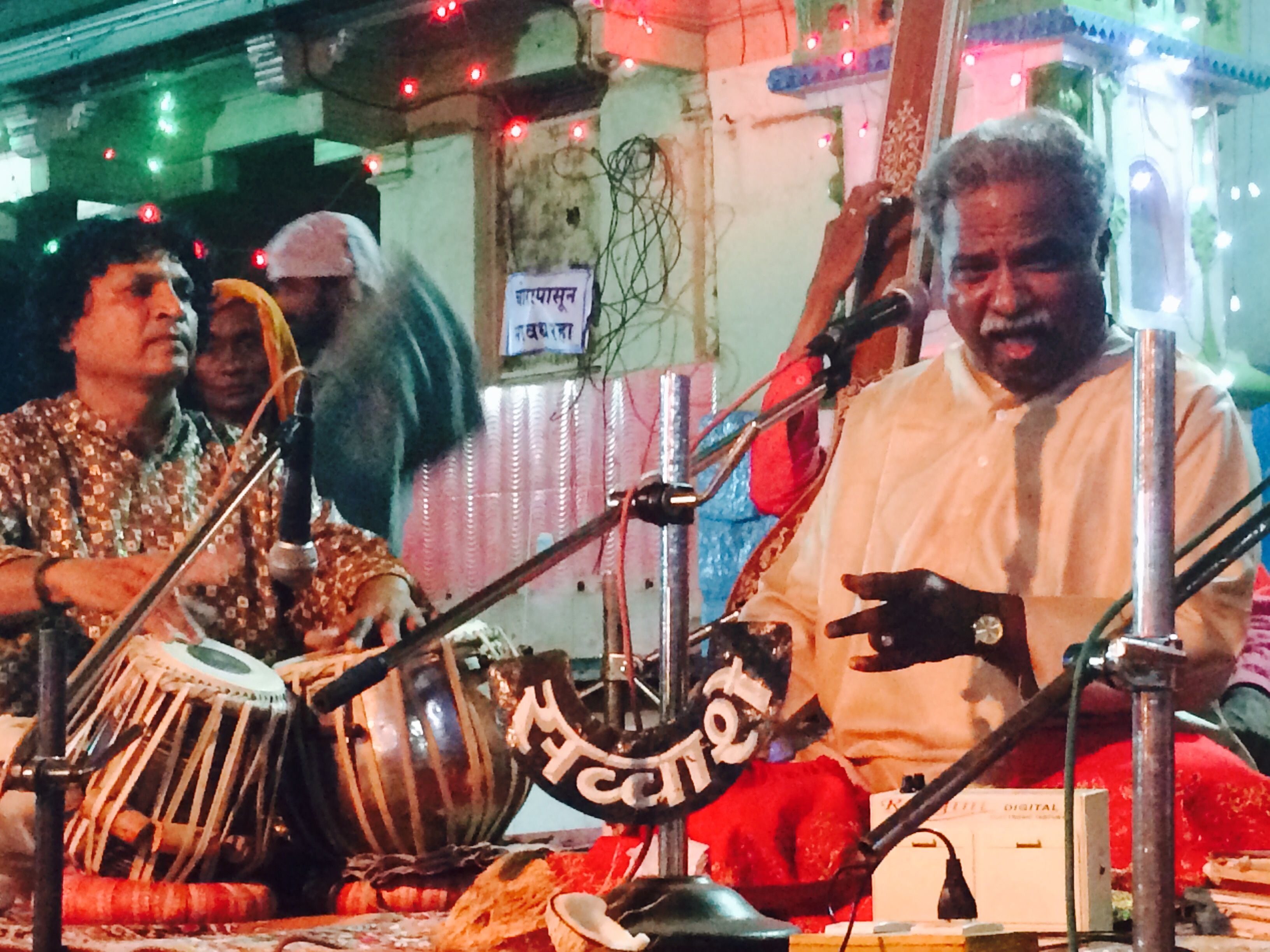 It is thanks to the bubonic plague that the musical town of Miraj can boast of its most illustrious resident to date.

In 1889, young Abdul Karim boarded a train from Bombay to Bangalore, to perform at a concert hosted by the Maharaja there. He was also escaping a scandal that would enthral lovers of Hindustani classical music for decades to come. His audacious affair and subsequent marriage with Tarabai Mane, daughter of a sardar in the royal court of Baroda, had provoked such societal tumult that it no longer made sense to remain in Bombay, where the couple had sought shelter to begin with.

By the time his train pulled into Miraj, a town at the border of Karnataka, Abdul Karim was so unwell that he decided to halt his journey.

There, fortuitously, he met a fakir who asked him to go to the dargah (shrine) of Khwaja Samsuddin Mira Saheb of Kasgar and seek a cure. At dawn, the ailing Abdul Karim arrived at the shrine, sat on the blessed ground under the tamarind tree and sang a prayer. His disease was miraculously cured.

It is under this very tree that 120 years later, an annual concert commemorating Ustad Abdul Karim Khan is held.

For 40 years, until he breathed his last in October 1937, the doyen of the Kirana gharana expressed his devotion through his music at the dargah during urs festivities. On one occasion he even declined a summons from the king of Kashmir because a trip to the court would have disrupted his musical services at the shrine. The emir of Afghanistan was similarly rebuffed.

When his first death anniversary coincided with the urs, a group of preeminent musicians of the time (including the Ustad’s foremost disciple Sawai Gandharva, Balkrishnabua Kapileshwari, Roshanara Begum, his daughter Hirabai Barodekar and All India Radio chief Z.A. Bukhari), decided that the Ustad’s legacy would be best honoured with three nights of musical seva, or devotion, during the urs every year.

Early this May, this exquisite musical tradition saw its 82nd edition, despite facing an uncertain future.

The Miraj concerts have always been devoid of the PR, scale and splendour of Pune’s Sawai Gandharva Festival, which is a valued addition in the calendars of Hindustani performers. Even so, over the years an incredible array of artists have performed here, from Pandit Bhimsen Joshi and Gangubai Hangal to Pandit Jasraj and Prabha Atre.

On the first night this year, Padmashri Venkatesh Kumar’s luminous and robust Raga Jog set the tone for the 3-day event, which went on to feature the exponent of the Agra and Jaipur gharana Shounak Abhisheki and the distinguished 6th generation sitarist of the Dharwad tradition Ustad Rafique Khan. A view of the audience during the concert, seated i the central courtyard. Credit: Nikhil Inamdar

The programme’s setting is a memorable one. The dargah’s central courtyard is flanked by an elevated arched portico, where a small stage is set. The performer faces the direction of the domed shrine, which is raised and houses the Khwaja’s tomb, draped with silks and ceremonial finery. The minars or turrets are vibrantly illuminated with coloured lights. Devotees – both Hindu and Muslim – stream into the shrine all night long to offer their prayers. It is within this sacred, and secular, compound that “Khan Saheb” lies, alongside his third wife Saraswati Latkar or “Banubai.”

“I come here every year, not to showcase my artistic prowess, but to pray that my music gets better,” said vocalist Upendra Bhat, who performs without payment as a result, like all the other artists.

The audience must adhere to this seva bhav as well. Clapping is discouraged. Incongruous with the genteel nature of the classical soirées of larger cities, begging fakirs are not shooed away. The homeless poor are allowed to occupy the elevated platforms, and for this one night, share the space with the town’s elite who come to listen to the music. Punkha-walas fan the artists with tattered cloth fans. The festival is a magical mélange of religion, class and culture. A fakira fans the musicians during the concert. Credit: Nikhil Inamdari

“There is resistance building up, though,” reflected Suresh Kapileshwari, the frail octogenarian son of Balkrishnabua, one of the Ustad’s disciples, who has kept the tradition going for the last 35 years. “The younger generation that make up the dargah committee do not grasp the importance of keeping this tradition alive. They aren’t very cooperative.”

The disinclination on the part of the committee to form a trust, to avoid keeping official accounts of the paltry contributions that trickle in for the concerts, has starved the event of further funds and kept it hanging by a thread. As of now, Kapileshwari bears all the ticket and accommodation costs for the artists and their accompanists, which is unsustainable in the long run.

Politics and a striking cultural apathy among officials have also kept Kapileshwari’s efforts to carry on the Ustad’s legacy teetering on the brink.

His plans to restore a memorial hall near the dargah, originally built by Khan Saheb’s daughter Hirabai, into a concert venue, and the atmospheric though somewhat melancholic bungalow (now not in the possession of the Khan family) where he spent his last days, into a museum, have remained frozen. An old copy of the official biography of Abdul Karim Khan, written by his disciple Balkrishnabua Kapileshwari. Credit: Nikhil Inamdar

Kapileshwari is the guardian of several of the Ustad’s prized possessions, including his tanpuras, a harmonium, a gramophone, several pieces of furniture, a treasure trove of live recordings that have never been available on the market and a small collection of rare photographs. A few years ago he sent an appeal to the Mumbai Mantralaya asking for the Ustad’s home to be designated a heritage property and converted into a museum. The issue was discussed in the Legislative Assembly but, when the government got embroiled in the Adarsh scam, was pushed to the background. The 2012 fire at the Mantralaya purportedly gutted the file.

Ever since, fresh appeals have been sent to several Maharashtra Chief Ministers, including Prithviraj Chavan. These appeals have fallen on deaf ears. Now, a fresh petition has been sent to Prime Minister Narendra Modi via the Khansaheb Abdul Kareem Khan Sangeet Prachar Mandal, with a proposal to keep the varied activities under the Ustad’s name running.

“Without active political intervention, there is little hope that we can carry on. We do hope the PM takes cognisance of the matter,” says Kapileshwari, who sees little motivation at both the committee and the government level to keep the flame burning after he is gone.

The Ustad’s life and music embody the qualities of syncretism and harmony. The annual festival in Miraj is an example of a secular heritage that transcends religious boundaries. The festival keeps a composite culture alive in a time when communal passions rage high. It must be preserved and continued.

At a recent lecture-demonstration in Mumbai, the living legend of Hindustani music Padma Vibhushan Kishori Amonkar warned: “A country that cannot guard its fine arts cannot build a culture of peace.”