The Burning Purity of Zarina Hashmi

Zarina is the rare artist of Indian origin who manages to conceive a profound monochromatic, minimalist aesthetic that is shorn of clutter and ornamentation. 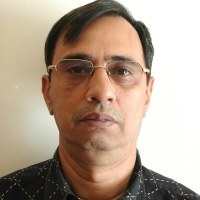 On the first day of Ramazan, April 25, 2020, the extraordinary artist and feminist Zarina Hashmi died in London. The day is significant because Zarina was an Indian Muslim and a believer. And it was in the auspicious month of Ramzan that the Quran was first revealed to Prophet Muhammad.

It was poignant for me personally, because it is also the day my painter father J. Swaminathan died in 1994. Like my father, Zarina too was, essentially, a self-made, self-taught artist who had taken on both life and the art world upfront and fiercely on her own terms.

Among all major Indian artists, it is easily Zarina who achieved, towards the end of her life, the most international acclaim with major museum shows at the Guggenheim, The Met in New York, The Chicago Art Institute and the Tate in London. Neither Francis Newton Souza who had lived in London from the 1950s and later in New York, nor M.F. Husain could match Zarina’s quiet but unrivalled success and acclaim in the global art scene in their lifetimes. 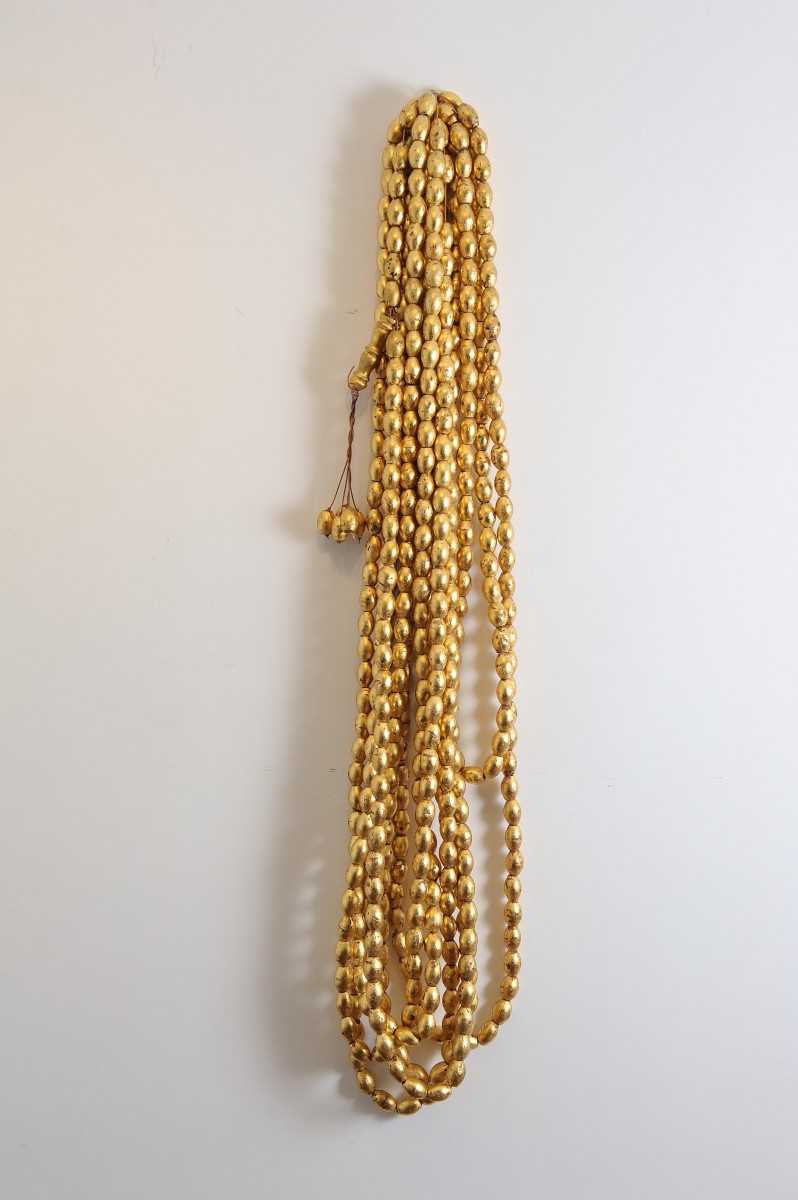 Zarina’s preferred medium was ink on paper, though she has done sculptures in wood, bronze and steel too. On her last trip to India, she took me to Aligarh where she was born in 1937 and her father Shaikh Abdul Rashid had taught medieval Indian history to the likes of Irfan Habib. Unlike most women of her generation, Zarina graduated with a BSc in mathematics. It here that she met and married the dashing and genial Saad Hashmi, who had just qualified for the Indian Foreign Service in 1957. On our last visit there, she went to visit and pray at his grave.

Life with Saad had been tumultuous but not quite what either had wanted from it. Zarina was not cut out to be a typical diplomat wife. She was too intelligent to make small talk and never quite took to making samosas and drawing up table placements. During Saad’s first posting in Bangkok, she came across Japanese woodcut prints and started to learn woodblock printing. She enjoyed the process of carving and gouging the wood with knife and chisel and then inking it and pressing it on paper to make the final print.

Also read: Usha Ganguli, a Theatre Artist Who Stood Apart From the Norm

Within a few years Saad was posted in Paris where Zarina joined Stanley William Hayter’s legendary Atelier 17. Zarina had now found her metier and she delved into it with full focus. In Paris she met with Krishna Reddy, the famous Indian printmaker and sculptor, who was to remain a lifelong friend. She also developed contacts and friendships in the art community of Paris including other Indian artists living there like S.H. Raza and Akbar Padamsee.

Life with Saad moved on and Zarina kept an awkward pace, many cities of the world became transitory homes but Zarina steadfastly continued to practice and learn art. Japan was one significant milestone, where apart from Japanese tradition of printmaking and Sumi-E drawings, she absorbed the Zen way of life and developed a minimalist, uncluttered, Haiku-like aesthetic. Soon, Saad was posted to New York and they lived in a grand apartment on the Upper East Side. 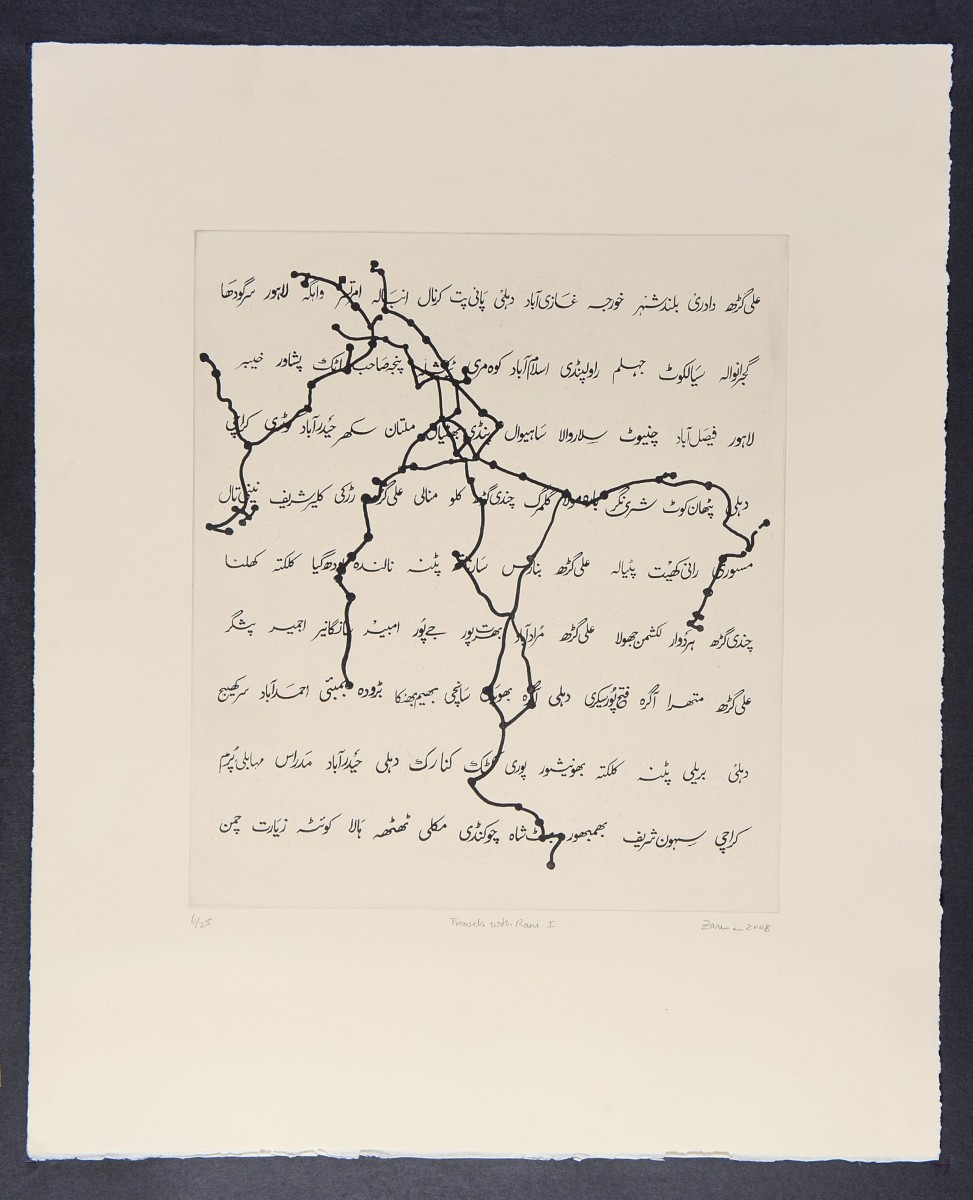 Travels With Rani I, a mind map of the places Zarina visited with her sister overlaid with names of the cities. Photo: Anup Sood

However, their relationship was floundering and when Saad returned to India, Zarina decided to stay back in New York. Then Saad Hashmi suddenly died of a heart attack and Zarina had no family left in India. Her parents had moved to Karachi, Pakistan, in 1959. New York offered the milieu and opportunity to work as an artist and keep in touch with her family in Pakistan.

By then Zarina had set up a studio in a rented loft that was also her home. In this period, she engaged with the early feminists and joined the New York Feminist Art Institute and served as a member of the editorial board of the feminist art journal Heresies. Living in New York was liberating but a sense of displacement, a feeling of ‘otherness’ prevailed. To support herself she took on teaching jobs and worked as a printer for other artists.

With no home to call her own, she turned that sense of insecurity into an artistic device. When she saw notices of spaces to rent, she read them as Spaces to Hide. This idea of loss of home and shelter has been a recurring theme among her favourite Urdu poets Meer and Ghalib, and Zarina encapsulated their lines in an amazingly tight visual vocabulary resulting in a seminal series of works with cast paper titled variously as Corner, Homecoming, Home is a Foreign Place etc.

While doing so she was also devising new techniques and methods of making, casting, sizing and printing of paper to give form and materiality to her oeuvre. Paper, she asserted, is like skin: “It can be stained, pierced and moulded and it still has the capability of breathing and ageing. It has a fragility and resilience.” Through the 1980s and 1990s in India Zarina’s work was increasingly being recognised by her peers as outstanding. She was a leading name among the artists of her generation, and not just as a woman artist. 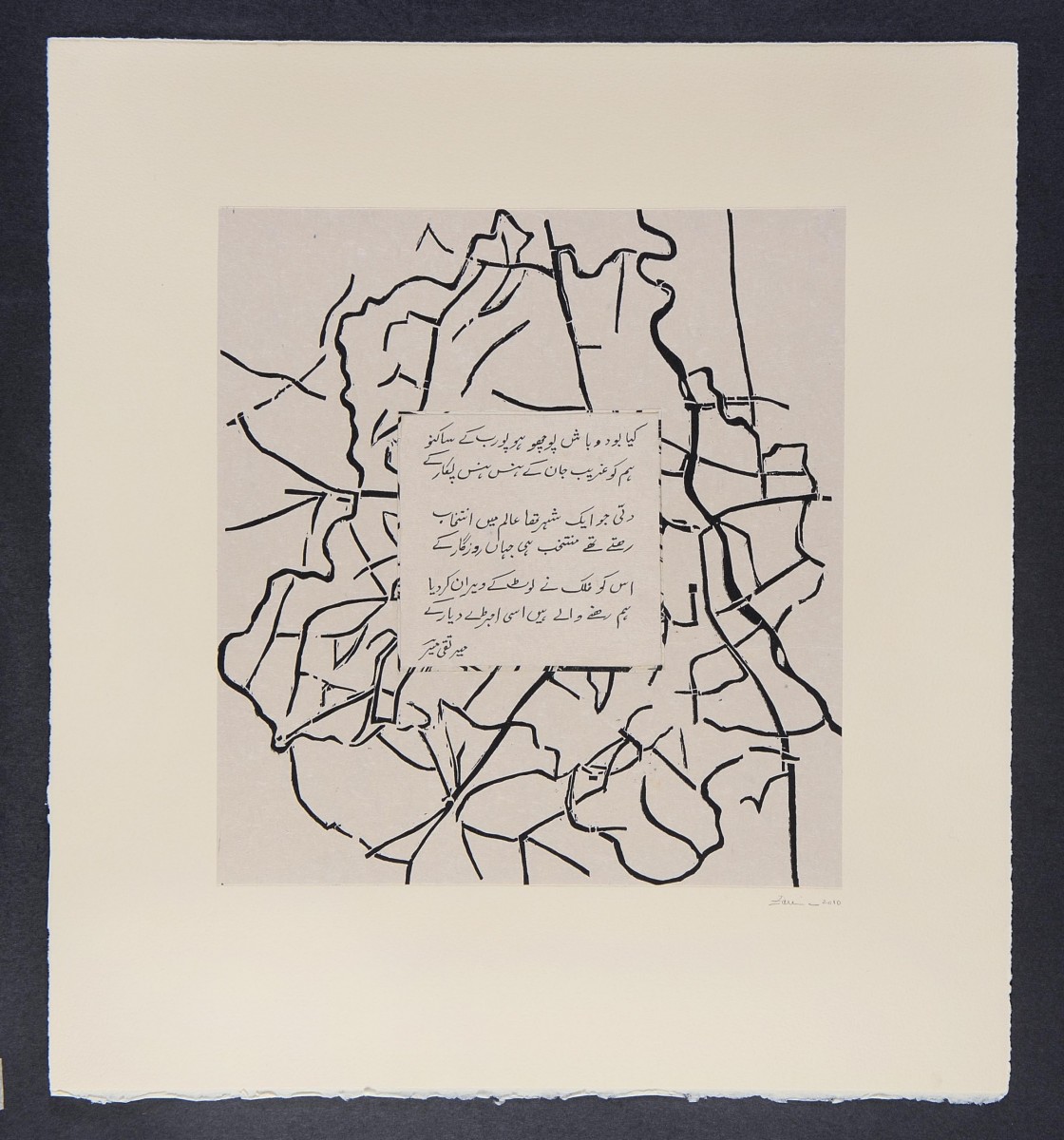 However, it was only in the new millennium that Zarina got her full due from the Indian governments and the market. She was presented by India at the Venice Biennale as an official entry and was soon represented by major galleries in New York and Paris.

In India she was shown by Gallery Espace, Delhi, in 2007 with an exhibition evocatively titled Kagaz ke Ghar or Paper Houses. Apart from the play on words (recalling the phrase “a house of cards” in English; and Guru Dutt’s classic Kagaz ke Phool in Hindi/Urdu cinema), in that exhibition Zarina had used a line from Ghalib: bedar-o-deewar sa ik ghar banaya chahiye / koi hamsaya na ho aur pasban koi na ho (Make me a house without doors or walls /no need for a companion, no sentry required). In her reclusive realm of a wall-less self-celebrated solitude, Zarina had realised full autonomy as an artist and as a Single, Self-made, Muslim, Woman.

Steering clear of both Indian and Pakistani nationalities, Zarina now declared herself to be an Urdu artist. In several works over the last decade of her life she kept returning to the notion of the ‘self’ in transit through memory. So from the floor plan of her father’s home in Aligarh (as in the work ghar), to the places she visited with her sister (Travels with Rani), to cities she had lived in or travelled through or had seen in conflict (Cities, Countries and Borders) – all make for an opus that weaves a vulnerable thread of personal history within the harsher grid of geopolitical time-space.

Zarina is the rare artist of Indian origin who manages to conceive a profound monochromatic, minimalist aesthetic that is shorn of clutter and ornamentation. Her display of an amazing leap of imagination or a dazzling flash of technique is invariably tempered by an equally grave sense of restraint. There is austerity and starkness in her articulation, but there is also an intense clarity of tone and warmth of timbre. Her visual haikus encapsulate whole narratives of experience, of memory, or just an abstract emotion or a fleeting feeling with incredible intelligence and economy of expression.

Zarina’s passion for geometry is palpable. Geometry, Zarina maintained, was “sacred practice”. She loved working with a geometry box, using the ruler, the compass and the triangle. As a much-travelled artist she could not have been oblivious of the trajectory of geometric abstraction in European art history. Yet Zarina’s art manages to remain resolutely rooted in the Indo-Persian tradition through condensed images and forms of step wells, niches and arches; through Urdu poetry and through personal history. Urdu-Persian poetic traditions had developed concepts for division of space – both private and public – in relation to society and the visions of paradise (bahisht). So, there is a God-made/ man-made; worldly/ other-worldly; nature/ culture dialectic happening there which puts Zarina’s practice of the Sacred Geometry in an orbit of its own.

In her last phase, Zarina played with the concept of noor, or divine light, in Sufism. Like a darvesh in the throes of ecstasy, she let go of her habitual reserve and splurged extravagantly with pure gold. Being an Indian and having lived in Thailand, she associated gold with the divine and the auspicious. Using 22-carat gold leaf she gilded strings of wooden beads shaped to resemble giant tasbihs (rosary), or she made large hanging screens (purdah/chilman) that were cut or sliced in geometric grids, or woven like a mat.

“Initially, I thought a screen this size in gold might be garish; I put it off until it became necessary to express the title, Blinding Light. The title is inspired by the legend of Moses asking God to reveal himself. God warns him that he would not be able to stand the light of His presence but Moses insisted. When God revealed himself, Moses fainted and the surrounding hills and bushes burned…”

Invested with a lifetime of experience, painstakingly honed skill and the final surrender to Faith, Zarina’s art will ever remain in burning purity.

S. Kalidas has been an active commentator and participant on the Indian arts scene for well over four decades. Besides English, Kalidas can read, write and speak in Hindi, Urdu, Bengali and Tamil.