Sister Rosetta Tharpe: Elvis's Inspiration But One of Many Women Sidelined From History

Tharpe’s vocal performances dance the line between speech and song, clearly drawing from a lifetime of listening to charismatic preachers. 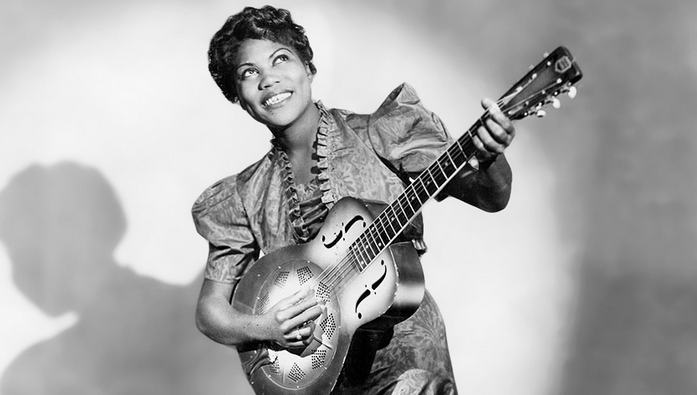 Elvis Presley is the perfect subject matter for Australian film director Baz Luhrmann. Not just because the opulence of Presley’s showmanship and Lurhmann’s trademark visual style are perfect bedfellows, but because the “Presleyverse” itself is not about Elvis Presley. It’s about the idea of Elvis, the great myth of Elvis – and Luhrmann trades in great myths.

What this particular myth is about is the inspirational story of a white man and how he changed everything – what it’s never about is the black women singers and musicians who forged the way.

We can summarise the conundrum by comparing two quotes. In Luhrmann’s screenplay, Elvis acknowledges: “Rock’n’roll is basically gospel and rhythm and blues”. Off-screen, the “godmother of rock‘n’roll” Sister Rosetta Tharpe spoke wearily from the flip-side of that truth: “These kids and their rock‘n roll is just sped up rhythm and blues. I’ve been doing that forever.”

And indeed she had. Born in Arkansas in 1915 to a family of sharecroppers, Tharpe spent her formative years immersed in the musical world of the Church of God in Christ, a Pentecostal denomination with a largely African-American congregational base.

Pentecostal churches generally were at the heart of the development of gospel music in the United States, most famously in black communities but no less so among white Pentecostals, actively encouraging the passion and fervour that music could arouse in a congregation.

It was in this context that young Rosetta learned to play guitar and inspire people through music. Tharpe swiftly earned a musical reputation among the religious community in Chicago, and at the age of 19 she moved to New York City, where her performances broadened out into the popular sphere. Throughout her career, she moved seamlessly between the sacred and secular musical worlds, enjoying high-level success in both.

Tharpe’s vocal performances dance the line between speech and song, clearly drawing from a lifetime of listening to charismatic preachers. It is exactly the vocal choreography on which rock‘n’roll was built. Her guitar performances pioneered distortion and string-bending techniques on newly emerging amplified instruments whose very use was championed in its earliest years by another woman, Memphis Minnie.

In Tharpe’s groundbreaking technique, we can hear the direct sonic ancestors of the canonical guitar players of popular music history, players whose lineage is far more commonly credited to male guitarists such as Muddy Waters, Chuck Berry, or B.B. King.

The sidelining of women from musical history is nothing new. Bach, Mozart, Schumann, Mendelssohn and Mahler could testify to that – Anna Magdalena, Marianne, Clara, Fanny, and Alma – the wives or sisters of the more famous male classical composers, I mean. In the sciences, there’s even a name for the specific phenomenon to which Memphis Minnie and Sister Rosetta have been subject: the “Matilda Effect.

First described in 1870 by Matilda Joslyn Gage, it describes the tendency to attribute discoveries solely to the male colleagues of women working on particular projects. Consider, for instance, Rosalind Franklin, whose work was central to the discovery of DNA’s double helix structure, but whose name has long been overshadowed by those of Francis Crick and James Watson.

In music, it might be harder to point to specific moments of “discovery”, because identifying an exactly “new” thing is not always so straightforward. But still, we could talk of a “Rosetta Effect,” wherein a woman’s musical contributions are eclipsed by those of the men nearby.

In 20th century popular music, there is admittedly something of a canon of great women. Even a cursory interaction with pop history 101 would yield names like Aretha Franklin, Billie Holiday, Ella Fitzgerald, Dinah Washington, Mahalia Jackson. But these women are primarily remembered for their voices, not their musical innovations or instrumental technique.

In the grand narratives of popular music history, women have been carefully contained in particular roles and sidelined from others. Even Nina Simone, a classically trained pianist, is known as the voice of Civil Rights-era America, not its piano accompanist.

And even acknowledging that Simone’s exceptional piano playing is part of the overall brand, the instrument itself is notable. Female singer-pianists are easy enough to find: in addition to Simone, there’s Tori Amos, Regina Spektor, Alicia Keys, Norah Jones, and Carole King. But Karen Carpenter was encouraged out from behind the drums, Delia Derbyshire’s technological wizardry on the Doctor Who theme was hidden behind the anonymity of the BBC Radiophonic Workshop, and Memphis Minnie’s name is nowhere near as well-known as that of her contemporary Muddy Waters.

The history of women in popular music is not as hard to trace as it may be for their classical counterparts, but the story (and indeed the reality) boxes them in to particular functions. Timeless, iconic voice is one of those functions – trailblazing musical innovator is not.

Luhrmann’s film faces head-on the musical debt that Presley – and by extension rock‘n’roll – owed to African American musical culture. It does so sympathetically to Presley, setting up black gospel music and the Beale Street music scene as his creative homes, sound worlds he shared with white America because he had been steeped in them since his childhood.

It’s not without its problems as a representation. Presley also sits in a long and complicated history of white artists’ relationship to culture outside of the white mainstream. This includes capitalising on musical styles with black origins (including Eminem in rap, or Amy Winehouse in jazz), making popular covers of songs by black artists (The Beatles’ ‘Please Mr. Postman‘ or Eric Clapton’s ‘I Shot the Sheriff‘), or simply straight-up cultural appropriation (think Iggy Azalea’s ‘Bounce’ or Justin Bieber’s dreadlocks).

The question of authenticity hangs heavy over Presley’s musical legacy, and it’s not a simple one to answer. The history of rock‘n’roll is inextricably linked to the long, grim history of racial politics in America, and telling it requires great care and sensitivity.

We may, though, be long overdue for an equivalent story on the subject of women like Sister Rosetta Tharpe in popular music history.

Freya Jarman, Reader in the Department of Music, University of Liverpool.