Top Delhi collector pays 15 times the estimate for an oil on canvas painting of a sensual figure by Hemendranath Mazumdar at Christie’s. 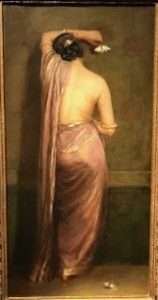 But Christie’s produced the surprise result of the week with an astonishing hammer price of £450,000 – 15 times the £25,000-35,000 estimate – for Abhiman (Wounded Vanity), a sensual female figure by Hemendranath Mazumdar (1894-1948), whose works were often bought by India’s old maharajas in the last century.

Believed to have been bought by Kiran Nadar, India’s leading collector who has a large art museum in Delhi, the 32in x 16in oil on canvas fetched a total price of £548,750 ($732,000) including buyer’s premium. That was five to ten times the prices that have paid for similar works by the artist in other Christie’s auctions, and was inevitably a personal world record.

There is strong competition between the four or five main auction houses for South Asian art sales at a time when the top collectors are only interested in an artist’s best works and when it is becoming increasingly difficult to find lots of sufficient quality.

In sales three months ago, Mumbai-based Asta Guru, the most recent entry into the market, beat other Indian and international auction houses with a two-day on-line sale that yielded a total of Rs 89.16 crore ($13.93 million). Christie’s achieved $10.29 million in New York and Saffronart came third with a Rs 27.64 crore ($4.32 million) live Mumbai auction.

The Christie’s South Asian modern art sale started amazingly well but later showed signs of auction fatigue for some of the most famous mid-late 20th century “moderns” such as Syed Haider Raza, Vasudeo S. Gaitonde, and Maqbool Fida Husain, who failed to shine while older artists from the classical Bengal school did extremely well. 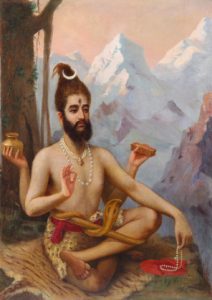 Kiran Nadar (it is assumed) won the Mazumdar after just a few minutes of dramatic bidding that began at £24,000 and immediately jumped to £40,000. With just her and another bidder (possibly from the UAE) contesting by telephone, it then rose quickly through the hundred thousands and then in £30,000 jumps to the final figure that was made on the phone to Deepanjana Klein, Christie’s international department head.

Observers said that the purchaser had not expected such competition and tried to explain the price by pointing to the extremely fine detailed work, some in gold, on the woman’s bracelet and sari, and flowers in her hand and on the floor. Several people at the auction preview talked about how there were many similar portraits in Delhi and elsewhere by the highly productive artist.

Basically, it was a case of two determined bidders pushing up a price till one of them backed off. If only one of them had bid, the work would have probably gone for little more than £40,000.

That was the sixth lot in the Christie’s sale. The first three lots had also done well, albeit at lower levels. All by Rabindranath Tagore (1861-1941), they went at several times the estimates. These works are regarded as non-exportable national art treasures in India (like the Ravi Ravi Varma above left) so realise a premium when sold abroad.

By contrast, the moderns by members of Mumbai’s Progressives group of artists that began in the 1950s did poorly. They usually dominate auction headlines but two by Raza and one by Husain failed to sell. 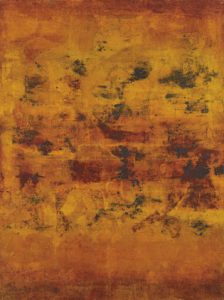 The hammer price for a medium sized 39in x 30in saffron coloured oil on canvas (left) by Vasudeo S. Gaitonde (1924-2001), which was on the front cover of the auction catalogue, did not even reach the low estimate and sold after just a couple of desultory bids for £850,000 (£1.3 million including buyer’s premium).

Perhaps the most disappointing result was the £700,000 (£848,750 with the premium) achieved by a gigantic 10ft x 10ft red, black and white acrylic on canvas of a falling figure by Tyeb Mehta, one of the best selling Progressives (see image at the bottom of this article). That was far below the £1.2 million-£1.8 million estimate.

Too large for many private buyers to contemplate, the work has a memorable history. It was painted by Mehta in 1992 as the central backdrop for an Artists against Communalism sit-in at Mumbai’s Shivaji Park at a time when the city was being submerged by communal riots.

“Tyeb Mehta got up from a very sick-bed, against his doctor’s orders, and painted the outstanding blow-up of his traffic leitmotif ‘falling figure’ for the extensive back-drop of the stage,” the Economic Times reported at the time.

“The red that he uses is equally the colour of love, and of blood”, said Hugo Weihe in 2012 when he was Christie’s international director of Asian art, just before he auctioned the work in New York for $722,500. “This was the obsessive theme that moved him—human suffering—and it was a painting that was incredibly important to him. It represents what was at his core”. 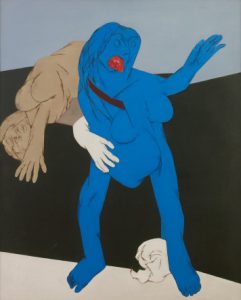 Offsetting that low result for what most buyers would see as an iconic but difficult work, was the record price achieved by the Saffronart auction for Tyeb Mehta’s 67in x 54in oil on canvas. Depicting Kali, the often-violent goddess who represents the ultimate triumph of good over evil, it is one of only three works that Mehta did on this subject.

It was originally owned by Ebrahim Alkazi, one of India’s most famous and expert collectors, and was sold by Saffronart for Rs 5.72 crore, then a record price, in June 2007.

The bidding on this work – trackable because Saffronart’s website shows bids as they are made – was by two proxy potential buyers who, by 6pm (Delhi time) on the first day, had pushed the bids to Rs20.46 crore ($3.1 million). That was more in dollars than the hammer price of £2.3 million ($2.9 million) which produced Mehta’s existing record auction price of £2.74 million ($3.56 million, Rs 19 crore) including buyer’s premium in May last year at Christie’s in London.

So a record had already been made, but after that there was no more activity till a few minutes before the lot closed. Two bids then brought the price to a record of $3.998 million (Rs 26.38 crore) including buyers premium.

Its success helped 18-year old Saffronart celebrate its 200th auction with strong results, including good sales for the moderns that had been slow at Christie’s – the competition continues.

John Elliott is a Delhi-based journalist who writes a blog ridingtheelephant.wordpress.com