On May 19, two artists working on a public, Delhi-government approved project to celebrate the city’s culture were allegedly threatened by a group of RSS members and then treated aggressively by the police. 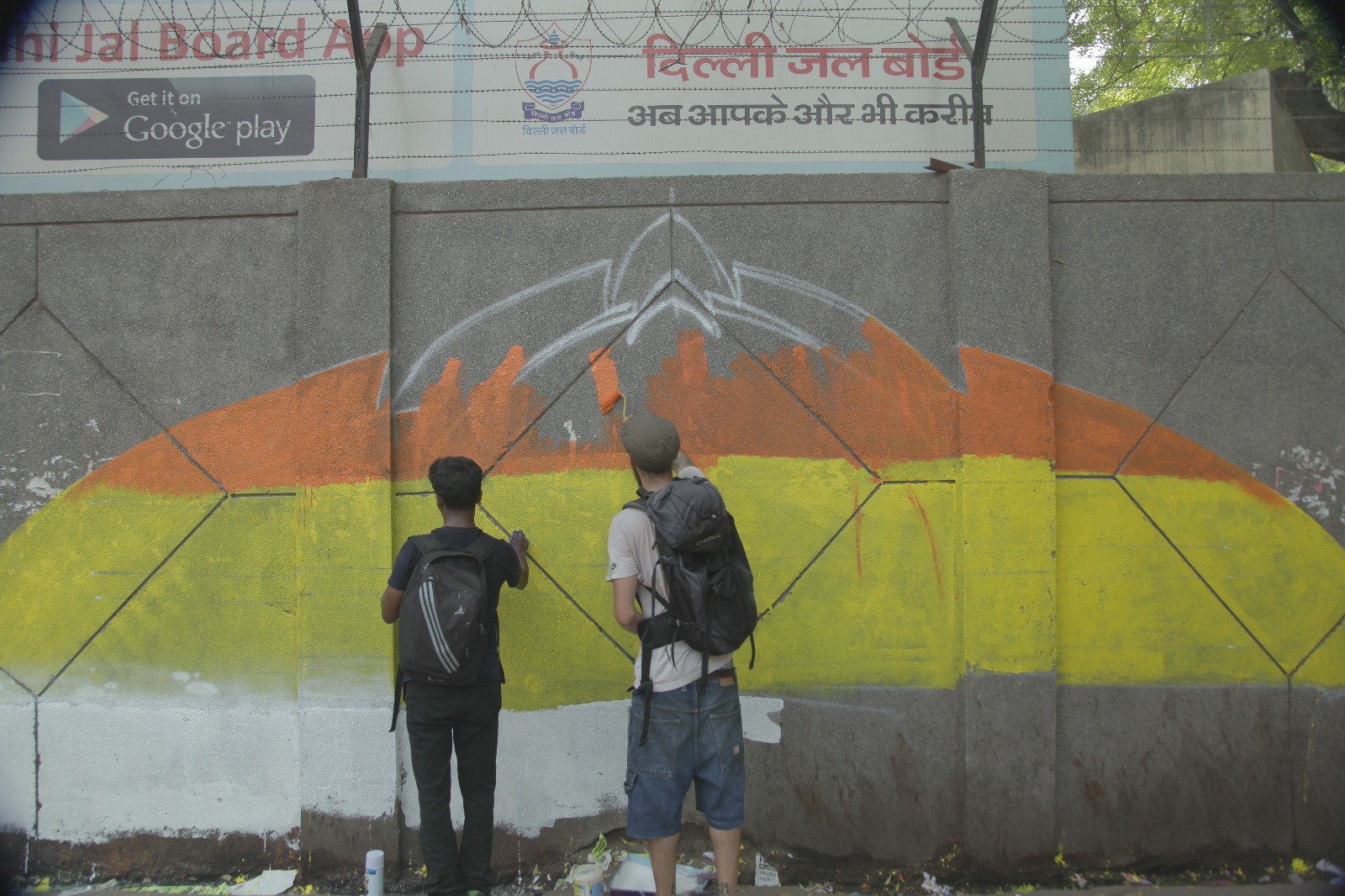 On May 19, two artists working on a public, Delhi-government approved project to celebrate the city’s culture were allegedly threatened by a group of RSS members and then treated aggressively by the police.

The two artists Akhlaq Ahmad and Swen Simon were painting a couplet in Urdu on a wall of the Delhi Jal Board in Shahdara when two or three men accosted them, the artists said, and demanded to know why they were painting the Urdu script and ordered them to stop. The men identified themselves as RSS members and said that they “could bear anything, but not the Urdu script”. They forced the artists to paint in Hindi over the Urdu line they had already painted: ‘Swachh Bharat Abhiyan’ and ‘Narendra Modi.’

Ahmad, a signboard painter better known as ‘artist Shabbu’, and Simon, a visiting French artist, were commissioned the wall as a part of a 30-month-long project called ‘#MyDilliStory,’ which the umbrella art initiative ‘Delhi, I Love You‘ began in 2014, in collaboration with artists and NGOs. In its first phase, #MyDilliStory invited people to share their stories, poems and quotes in celebration of Delhi, on Twitter, in one of the city’s four official languages – Urdu, Hindi, Punjabi or English. A jury consisting of academics from Delhi University, Jamia Milia Islamia and other institutions selected 40 winning tweets.

In the second phase, now underway, the city’s signboard painters and other artists are hand-painting the winning entries on prominent public walls.

Kush Sethi, a member of ‘Delhi, I Love You,’ told The Wire that the project aims to “start online and offline conversations about Delhi’s culture – its art, history, ecology and food,” and also to revive hand-painted typography.

The project is being undertaken in partnership with the Delhi government, Delhi Tourism, Twitter and Hindustan Times.

On May 19, when they were accosted by the men, Ahmad and Simon were painting a couplet in Urdu composed by Delhi University student Zeeshan Amjad that read:

(“O Delhi! You were ruined and again you overcame your ruins/ No city has a heart like yours”).

Speaking to The Wire, Ahmad said that the men threatened to beat him and Simon up, verbally abused them, smudged the Urdu letters they had already painted and snatched their paintbrushes from them. They began to chant “Jai Sri Ram” (“Long Live Lord Ram”). Gradually, a crowd of over a hundred people formed and the atmosphere grew increasingly aggressive. Ahmad said he attempted to take pictures on his phone, but the men snatched his phone away from him and deleted the photos. The mural, with ‘Swachh Bharat Abhiyan’ in Hindi overlaying the couplet in Urdu. Credit: Delhi, I Love You

“The police then appeared,” Ahmad told The Wire, “It seemed that one of the men had called them, but as soon as they arrived, the men vanished and the crowd dispersed. The police began to aggressively ask us why we were writing in Urdu, like the men. We explained that we were artists doing a government-approved project. Even so, they took us to the police station and continued to question us and say random things to us disrespectfully. One of the policemen took my phone away, so I couldn’t call Kapil Mishra, the culture minister, who had given us permission.”

One of the policemen then received a call from Kapil Mishra himself, after which, Ahmad told The Wire, all the policemen present “completely transformed.” Ahmad and his partner suddenly became ‘bhai sahab’ (gentlemen) and were offered cold drinks and food. Finally, after the policemen returned their phones to them and saw Mishra’s letter of permission on the phones, the artists were allowed to leave.

Ahmad is now back to painting his walls and the #MyDilliStory continues. How ironic, however, that a project to express ‘love’ towards the city and to celebrate its culture should have been met with such hostility and aggression. At other times while painting public walls, however, Ahmad hastened to add while speaking to The Wire, he has been supported and his work appreciated.