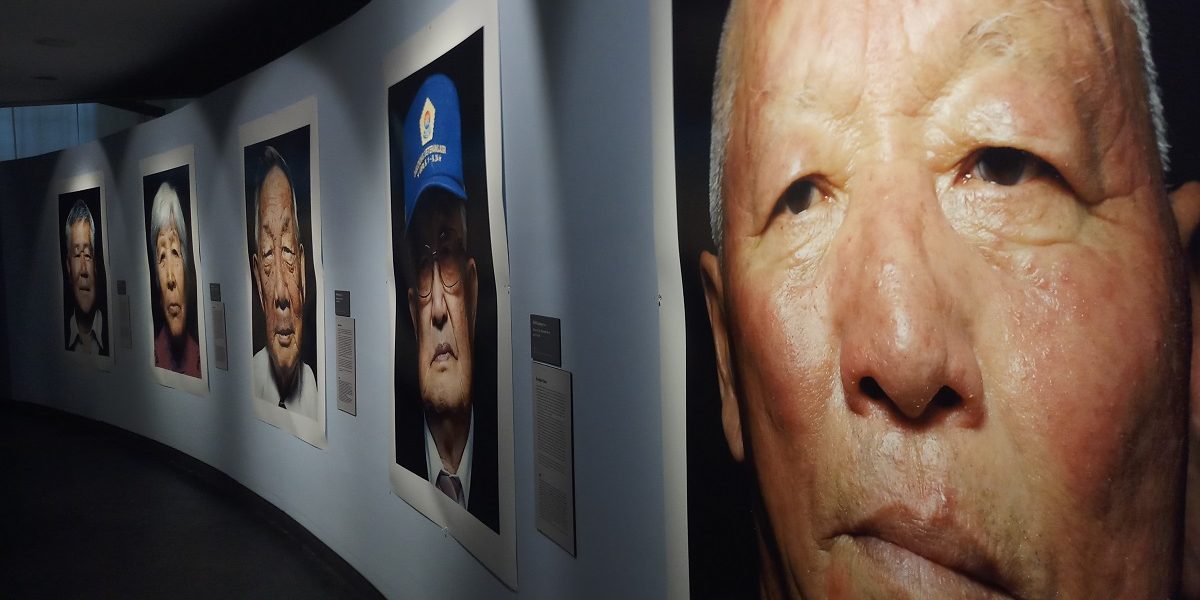 New Delhi: History textbooks have – many a time – failed to capture the individual lives of commoners during tumultuous times. Histories of war and popular movements have always been enriched by individual stories of remembrance. Such historicity has always touched hearts.

A walk through the on-going exhibition at New Delhi’s National Gallery of Modern Art (NGMA) is a journey through these stories. “One Shiny Day”, an artistic commemoration of the 100th anniversary of the March First Independence Movement of Korea against the brutal 35-year Japanese occupation, captivates the eye. It speaks of the everyday struggle of common people during those times – narrated through remarkable individual accounts interposed by sketches, film, photographs, woodprint work, typography and new media.

Artwork of as many as 12 top South Korean artists are on display at this must-see exhibition, which began on August 14 and will continue till September 29, brought to the NGMA by the Daegu Art Museum. It has been channelised through the cultural exchange programme between India and South Korea.

The movement is a significant event of early 20th century Asian history and is considered to have been a catalyst to the creation of a free and modern South Korea. In the centenary year, the artists – through a variety of mediums – not only succeed in chronicling it but also a close comprehension of how individual lives must have been affected during those 35 years of Japanese colonial rule (from 1910) before on August 15, 1945, finally achieving freedom.

The March 1 movement, locally referred to as the Samil movement, was the first public display of Korean resistance. The story goes that historian Choe Nam-seon drew up an independence charter which was read aloud by 33 activists around 2 pm on March 1, 1919, at a restaurant in Seoul. They signed on the document and submitted it to the governor. This was followed by a chain reaction of thousands of common people reading the charter out. The Japanese military unleashed a ruthless clampdown on such gatherings, throwing people into jails in thousands and killing many.

The black and white drawings of Jo Donghwan and Jo Haejun, a father-son duo, encapsulate the charter’s declaration. Drawing from the memory of an educator, the Jos recalled how Japanese was imposed on the Koreans. “My teacher went to Gobu Elementary School for his entrance exam with his father at the age of 11. He came back home without passing the exam because he could [not] speak Japanese”, read a caption explaining a drawing.

Other sketches represent the colonial government’s discrimination against locals in employment, food supply; how colonialism triggered a disparity in the quality of education, leading to mass illiteracy in the rural areas – that Korean teachers in rural areas were forced out of jobs because they didn’t know Japanese. One such drawing said, “When I was in my 4th grade at the agricultural school in Jeongup in the autumn of 1944, I was mobilised as a labourer for 10 days for the project to construct Gunsan Airport.”

Another memory, from the Pacific War, shows how every student needed to pay homage to a Japanese Shinto Shrine to remind the Koreans that they are imperial subjects of Japan. “It was an era when those fleeing without paying homage at a Japanese Shinto shrine could be subject to an ideological crime, for which the entire family could be punished.” 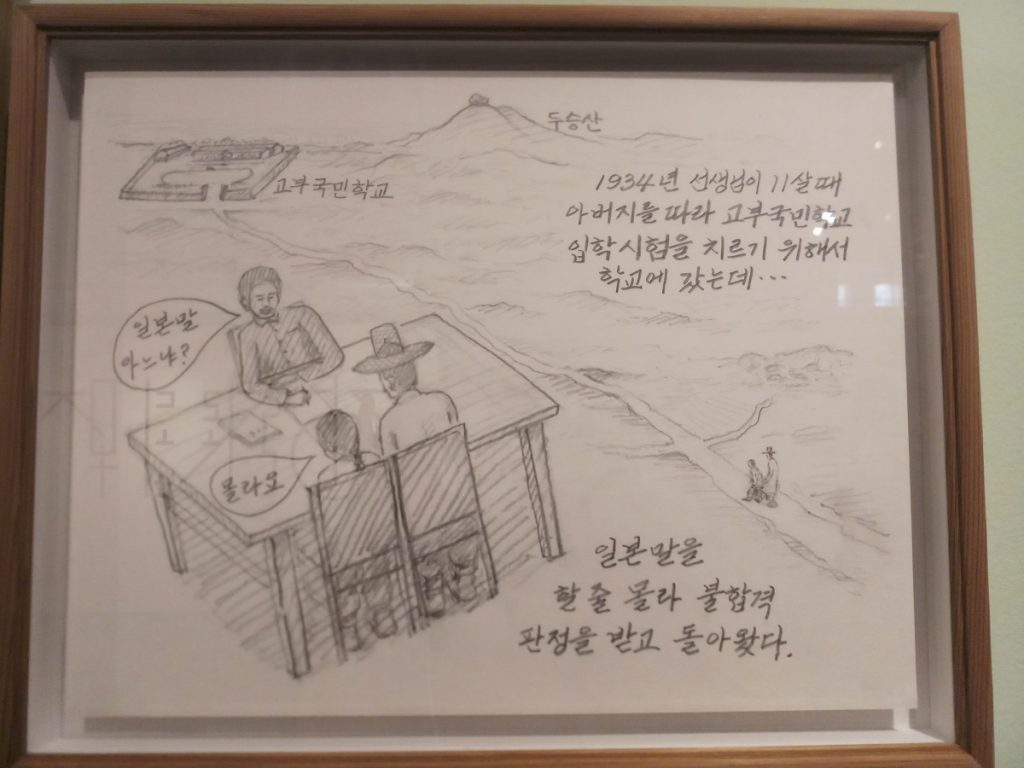 Through sketches, the artists also recalled how the Pacific War caused famine in Korea, leading people to eat short-awn foxtail with brown rice and even white sand dug deep from the ground. Eating sand often left people sick “with headache and stomach ache,” a drawing shows.

The drawings of the duo also go on to chronicle what happened after liberation. “There was a movement to teach the Korean alphabet for two years from 1946 to 1947 (to eradicate illiteracy). The movement even took place throughout the village at night.” The memories tell of an educator visiting every village to teach people how to draw the Korean flag and sing the national song.

This was followed by Communist rule and the division of the country, leading to the burning of documents and the North Korean flag.

Yet another section of the exhibition displays life-size photographs of faces, with captions telling their life stories. Clicked by Sohn Sungyhun, the portraits concentrate on Korean diaspora who were forced to stay away “due to political and historical tumults in Korea.”

One such story is of Arkadiy Ligay, born in Uzbekistan. “His father was a veterinarian and mother a homemaker. His parents told him that Stalin put Koreans on a train in 1939 and forced them to move to Kazakhstan. The land they arrived on was too barren to farm and when their leader Byeong Hwa Kim insisted that they ‘will survive if they move to Uzbekistan where it is warmer’, all Korean immigrants walked 45 days together to Uzbekistan and settled there.”

Then there is “The Trains” created by Kim BoMin. Against the street map of Seoul of 1910, the artist places framed snapshots of the modern buildings of Seoul. Just like a train connects distant places, her photos represent a bridge between Korea’s past and present, between Seoul and Pyongyang. Outside the map, she marks Mt. Geumgang situated in North Korea, and expresses her desire to visit it one day.

Among the impressive displays is “The Floating and Crashing”, a new media artwork by Bae Sungmi. Onto a spell of sea waves hitting the shore, she has dropped words like ‘desire’, truth’, ‘relation’ and ‘justice’ on to the moving visual. As you stare at the work, the words feel like waves crashing against rocks. Quivering, they stay afloat, thus driving home the point that there are certain unchanging sides to the world.

The exhibition ends at a ground-to-ceiling black and white photograph by Lee Woosung – of young people looking at one direction under a flag, holding a torch or a candle, signifying resistance, representing a collective force.