Locked Down by the Pandemic, Culturally Important Nomadic Communities Struggle to Survive

Because these iterant vendors of folk arts are unable to travel to carry out their traditional occupations, their generations-old customs and practices are at risk of being endangered. “We make this musical instrument, play it and repair it with our own hands. In our childhoods, we never received any education through textbooks, we only learnt to play these instruments to make a living out of them for ourselves and our families,” said Mohammed Sher Khan*, holding a dholak in his hand.

The dholak, a two-headed Indian instrument, is all that Sher Khan has known his entire life. Familiar with every sound, every crevice and every variational use of this musical instrument, the 27-year-old is a nomad and heir to the centuries-old tradition of being a dholakwala of Barabanki, Uttar Pradesh.

Despite having perfected the craft of making dholaks, the dholakwalas, ever since the pandemic, have been unable to play or even sell their instruments in any town they visit due to a lack of demand and the restricted gatherings of people in markets.

Propagators of the arts

In a recent field study undertaken by our team at the Centre for New Economics Studies (CNES), we spoke to members of different nomadic communities settled across slum-like settlements in Pune, Maharashtra, ever since restrictions on mobility were announced after the second wave of the pandemic.

Many of our respondents were nomads originally belonging to the states of Uttar Pradesh, Chhattisgarh, Bihar and Jharkhand, engaged in a peripatetic lifestyle, going village to village, city to city, selling their craft and playing instruments across states like Tamil Nadu, Maharashtra and Karnataka. As propagators of music who navigate a vagabond-like existence across India, each nomadic community inherits a craft that is an integral part of both their identity and their livelihood.

Unfortunately, any discussion on their lives and vocations escapes the prism of mainstream conversation, even though nomadic communities have perennially played a crucial role in shaping the kaleidoscopic view of India’s rich cultural landscape. Often engaged in fine craftsmanship and the performing arts, they are unrecognised and under-appreciated artists. 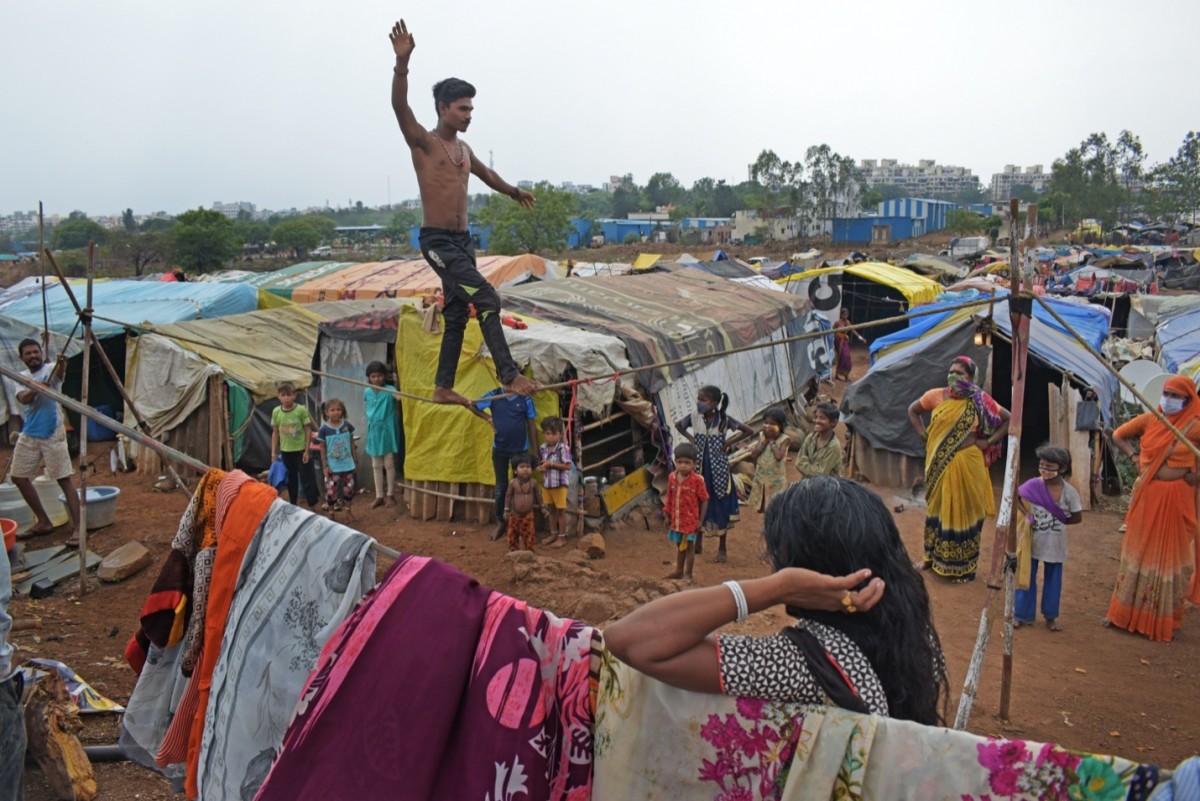 Consider the tight-rope walkers of Chhattisgarh called damuris. Adept in performing ropework and circus tricks, they left Raipur and Bilaspur to perform shows in Mumbai, Nainital, Rishikesh, Hyderabad, Bangalore, Delhi and other cities. Much like the dholakwalas, they realised the need for an itinerant style of living since they could not keep performing the same show in one place for too long. After travelling the country for decades, the damuris pass on their talent to their children even today, forming a long lineage of performers.

Also read: The Making of Khwaabgaon: How an Idyllic Village in Bengal Became an Artist’s Canvas

Rajesh*, a member of the damuri community, explained, “Our grandfathers and their forefathers have been practicing this work; we learnt from them and today our children learn from us. This is what we grow up with, starting as early as four years old.” 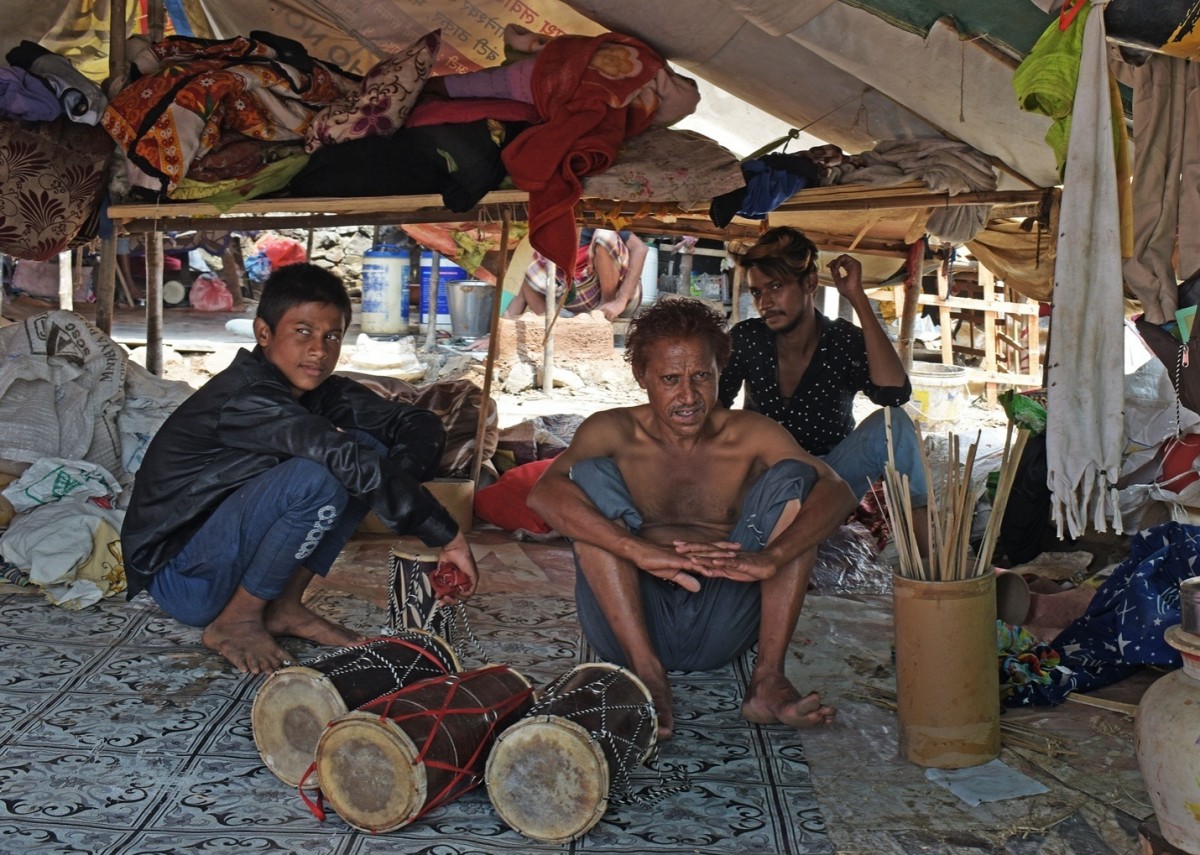 Exposure to the ancestral occupation from a young age has ensured that the heritage of nomadic communities like damuris and dholakwalas is carried forward by the next generation. As children are taught about their community’s craft and art, they are skilled by the time they reach their teens and take forward the work of their (fore) fathers.

The Nandiwale, devotees of Lord Shiva who our team spoke to during their travels across Maharashtra with their nandibail (ox), entertain their crowd with a practiced craft reliant on soothsaying. With their ancestral hometown in Baramati, Pune, most Nandiwale travel across the state in search of an audience and pasture to feed the nandibail. Unlike many other nomadic tribes, they do not charge the audience for their performances because of the deep integration of religious values in their culture and occupation. They are dependent on donations, or dakshinas (received in the form of money or rations) for subsistence. Over time, faith in the nandibail tradition has declined. Photo: Jignesh Mistry

Over time, faith in the nandibail tradition has declined which has lowered donations as well. Given the nature of their work and their limited resources, the Nandiwale have not been able to provide their children with stable education, rendering most of them unqualified for other jobs. Amit Salunke, a nandibail peddler, said, “We have to continue this tradition. There is no other work. Due to our lack of formal education, we cannot do anything else.”

Conversations with members of the communities about their deplorable conditions of living since the pandemic brought into question their legal status and political representation. While de-notified semi-nomadic and nomadic tribes are recognised by their family profession or peculiar lifestyle, they have also been categorised since colonial times as ‘hereditary criminals’ or ‘criminal tribes’. This is because in British India, certain communities had formed a cult committing extraordinary crimes. The British imperialists thus sought to unfairly identify and label each individual of these communities as habitual offenders and born criminal.

Having been classified under the Criminal Tribes Act 1871, members of these communities due to their ‘criminal’ identities had been forced to work and survive in the ‘informal’ nomadic space. The purpose of this inhuman law was to provide for the surveillance and control of these tribes. While travelling was a fundamental part of their survival, the colonial law sought to restrict the movement of these notified tribes by arresting those found ‘beyond the limits so prescribed’.

Although this Act was repealed post-independence and the communities were ‘de-criminalised’, the after-effects of being excluded from any form of administrative support remain detrimental to most nomads and are conspicuous even today. Not much has been done by the Union government to offer them more equal opportunities or tools of affirmative action to enhance their capabilities. 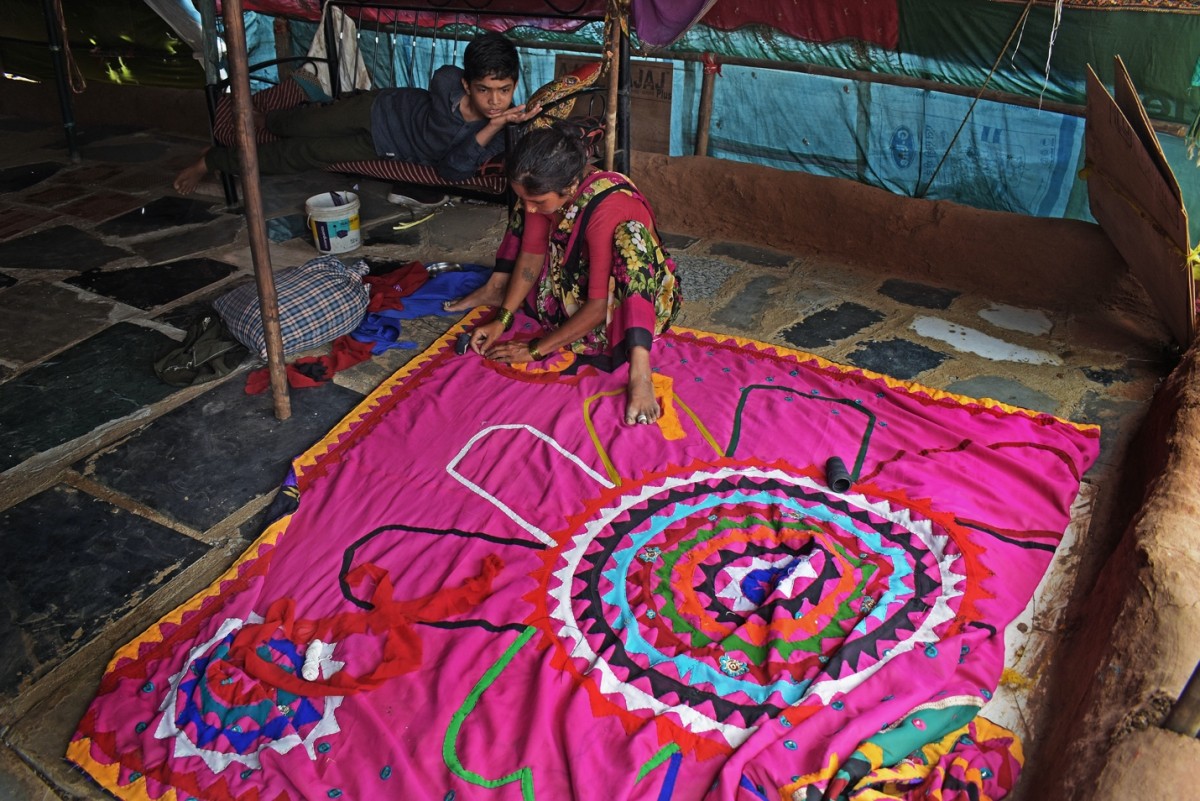 Most members of the nomadic tribes get no access to state-specific government aid. Photo: Jignesh Mistry.

Pushed by the pandemic

As communities that have already been pushed to the margins of society due to discriminatory laws and indifferent political treatment, their state of destitution has been further impaired by the COVID-19 pandemic. Travel restrictions imposed by state governments where the spread of the virus is higher have threatened an integral part of the nomadic community’s identity and survival: their freedom of mobility.

Unable to travel and carry out their traditional occupations in the marketplaces of cities and rural areas, most nomadic crowd pullers are unable to practice their generations-old customs which are now at risk of being endangered. Moreover, due to their lack of documents and permanent locations that can be authenticated in official documents, most members of the nomadic tribes get no access to state-specific government aid.

According to Amit Salunke, the nandibail peddler, the travel restrictions across states have prevented his community from accessing pasture, leading to the death of his sacred nandibail. Since apart from the religious and cultural value of the ox it also serves as the primary source of income for his family and community, losing a nandibail has forced him and his family to borrow and survive on debt. 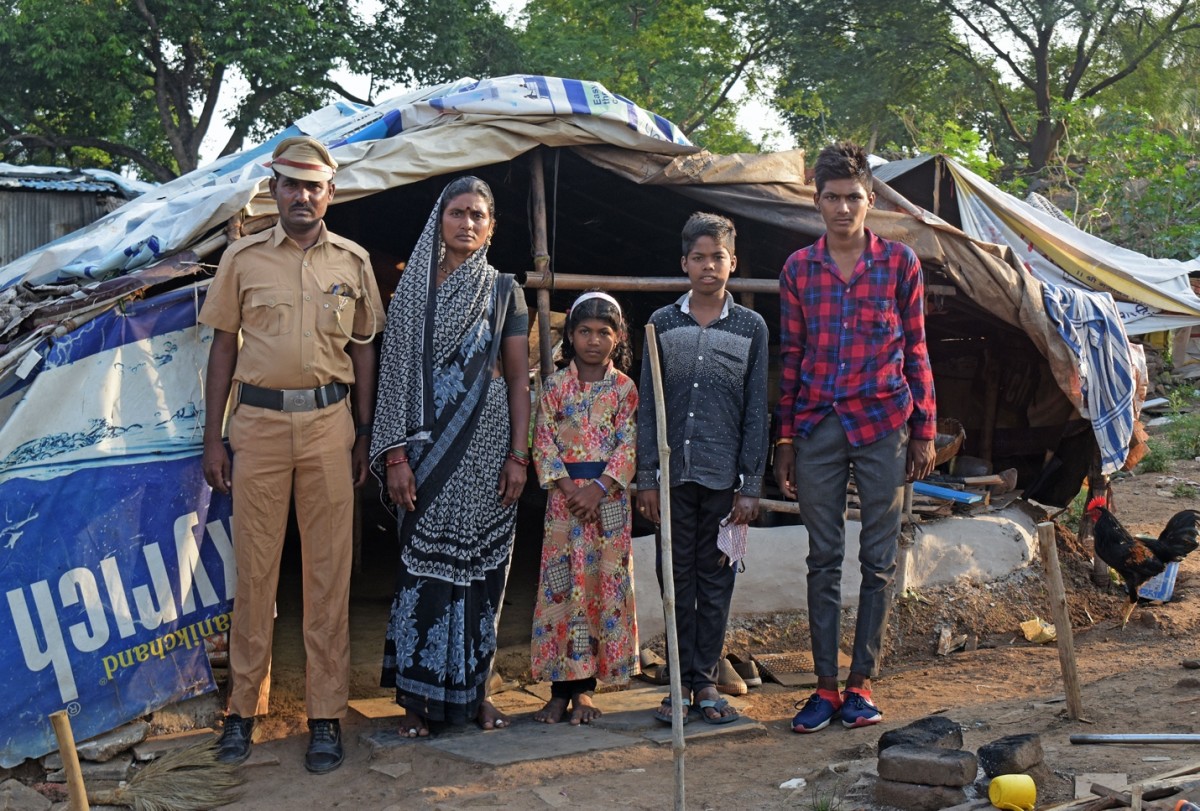 The impact of the pandemic on these denotified communities that belong to an unknown, informal landscape is grossly unrecognised. Photo: Jignesh Mistry.

Similarly, pandemic-linked restrictions have also adversely impacted another nomadic community, the bahurupis or thespians of the Nath Panthi Davari Gosavi community. As theatre performers who dress up as policemen and other characters to offer live entertainment, the bahurupis left their hometown, Bhigwan village in Maharashtra, to stage shows across the country.

Earlier they were crowd pullers providing entertainment to people through their street performances. Today they are often beaten up by the police when they try to perform during the pandemic while the locals refer to them as ‘coronavirus carriers’ because of their mobile lifestyle. In many ways, the pandemic has only intensified the social stigma that has haunted nomads for decades.

Also read: ‘Our Lives Are Shaped by Violence’: Kashmiri Artist Detained for ‘We Are Palestine’ Mural

The impact of the pandemic on these denotified communities that belong to an unknown, informal landscape is grossly unrecognised and warrants immediate administrative attention. The closure of live performances has adversely harmed the thespian bahurupis, the tightrope-walking damuris and the soothsaying nandiwale. Most are settled on the outskirts of cities (like Pune where we travelled), helpless and indefinitely unemployed from being unable to practice their vocation. 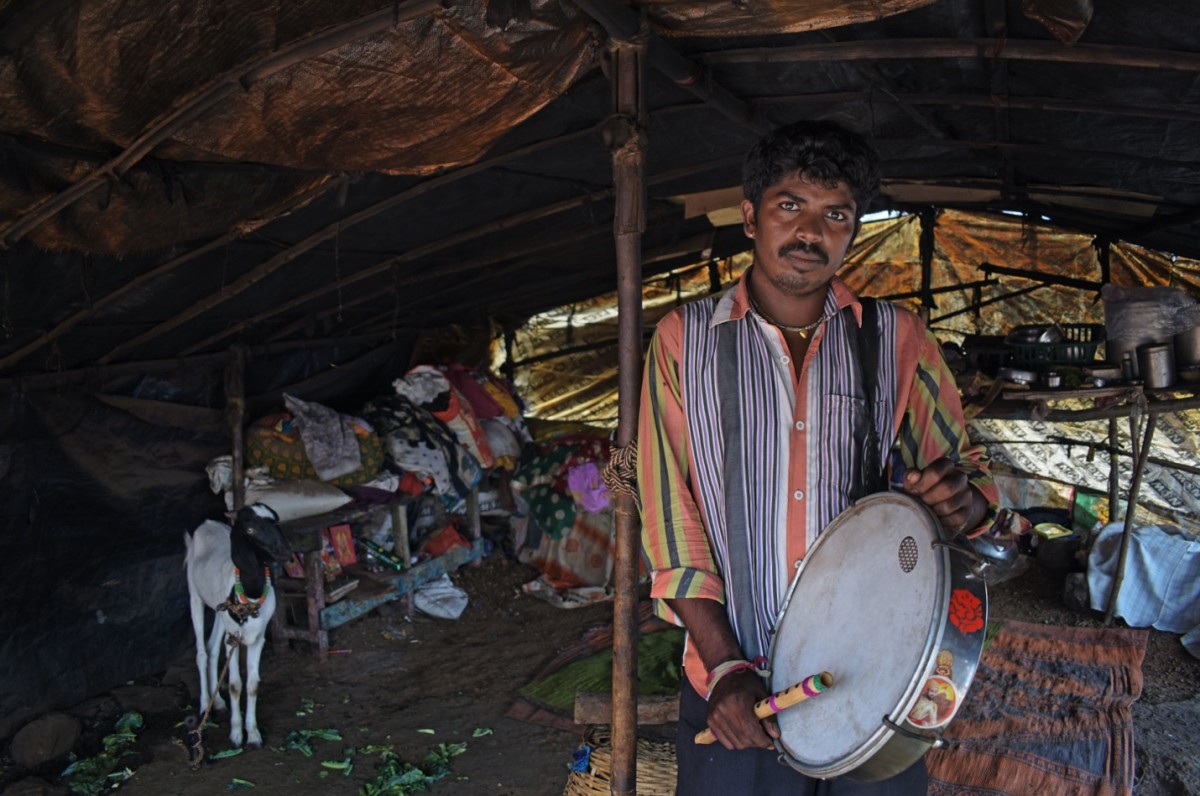 Without any governmental aid or financial support, these tribes find it difficult to survive and are apprehensive about their future. Photo: Jignesh Mistry.

Preserving the heritage of India’s nomadic communities is not just an issue of cultural importance anymore. In a desperate scenario where most are fighting to make ends meet, it becomes necessary to recognise and safeguard their right to life and the freedom of mobility that enables them to practice their craft.

Without any governmental aid or financial support, these tribes find it difficult to survive and are apprehensive about their future.

The least one can do in the collective ordering of our state and civil society is to include them as part of our socio-cultural fabric, providing them with all the help, basic amenities and rights available to our citizenry.

*The names of all the respondents have been changed to protect their identity.

This study was undertaken as part of a Centre for New Economics Studies (CNES) Visual Storyboard initiative. The authors would like to thank Ada Nagar and Vanshika Mittal for their support and assistance in archiving the team’s work in the form of video essays.