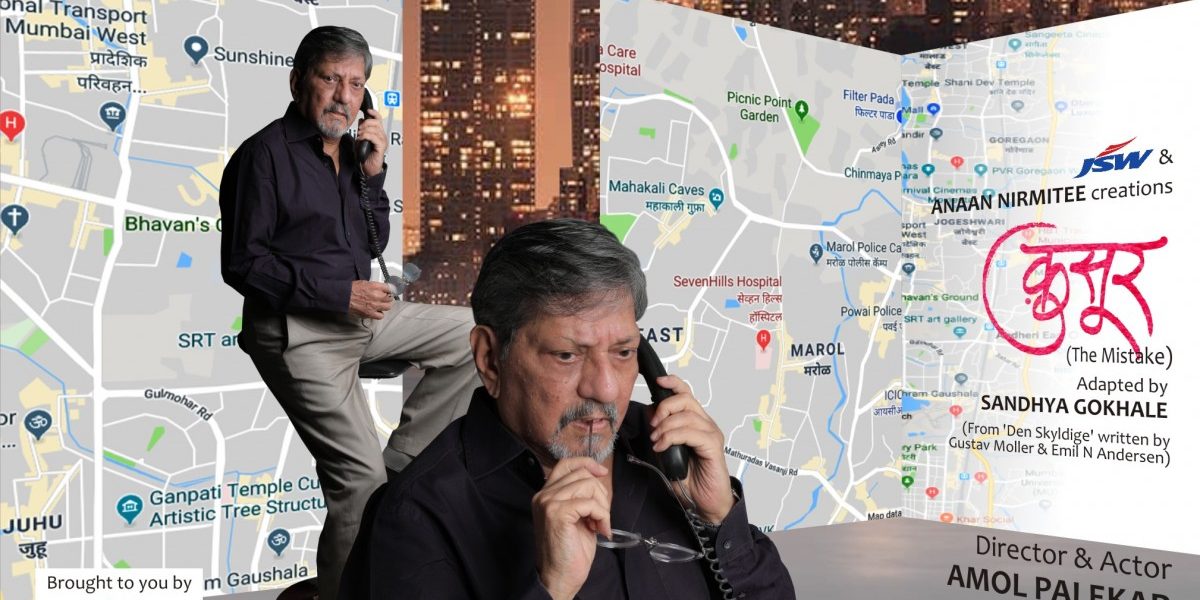 A poster for 'Kusur'.

“And if you gaze long enough into an abyss, the abyss will gaze back into you.”
∼ Nietzsche

After the performance of a new Hindi play, Kusur (The Mistake) directed by Amol Palekar and Sandhya Gokhale, I came out of the auditorium unsettled and anguished. This was not merely because of the provocative and eminently relevant nature of the content. Rather, it evoked a visceral response that made me wonder how a thinking individual assesses his or her own actions. It also forced me to confront how one copes with the irrevocable aftermath these actions inflict on others.

Kusur, an 80-minute single-act play, deals with the inextricable duel between actions and repercussions, and thus between conscience and guilt.

The play takes its inspiration from the Danish film Den skyldige, a very assured debut by Gustav Möller. Typically, this kind of adaptation is arduous, for a couple of critical and perhaps partially overlapping factors. The more obvious reason pertains to the nature of the medium. Unlike a film, in a play, the action is restricted within the confines of narrowly defined settings.

Even more importantly, the story line, while keeping the core of the original material intact, needs to organically evolve to reflect the indigenous context. Amol Palekar (director and lead protagonist) and his frequent collaborator Sandhya Gokhale (writer and co-director of Kusur) had the rather onerous task of adapting a social thriller film to the stage. Together, in this highly successful endeavour, they have turned both of these challenges into a rare opportunity.

Gokhale has chosen to restrict the entire play to a tiny, dingy control room. The dimly lit, small space, with a background suggesting an urban landscape, creates a claustrophobic ambience right from the beginning. These silhouettes complement the sparse furnishings, including an awkwardly shaped, cluttered table with control panels, telephone lines and blinking lights.

This seemingly quiet, spartan backdrop plays a quasi-metaphorical role for Dandavate, the protagonist. The set design transcends a realistic ambiance created typically by box sets. The minimalist setting does not distract the audience from being immersed in the dramatic pace of the play. 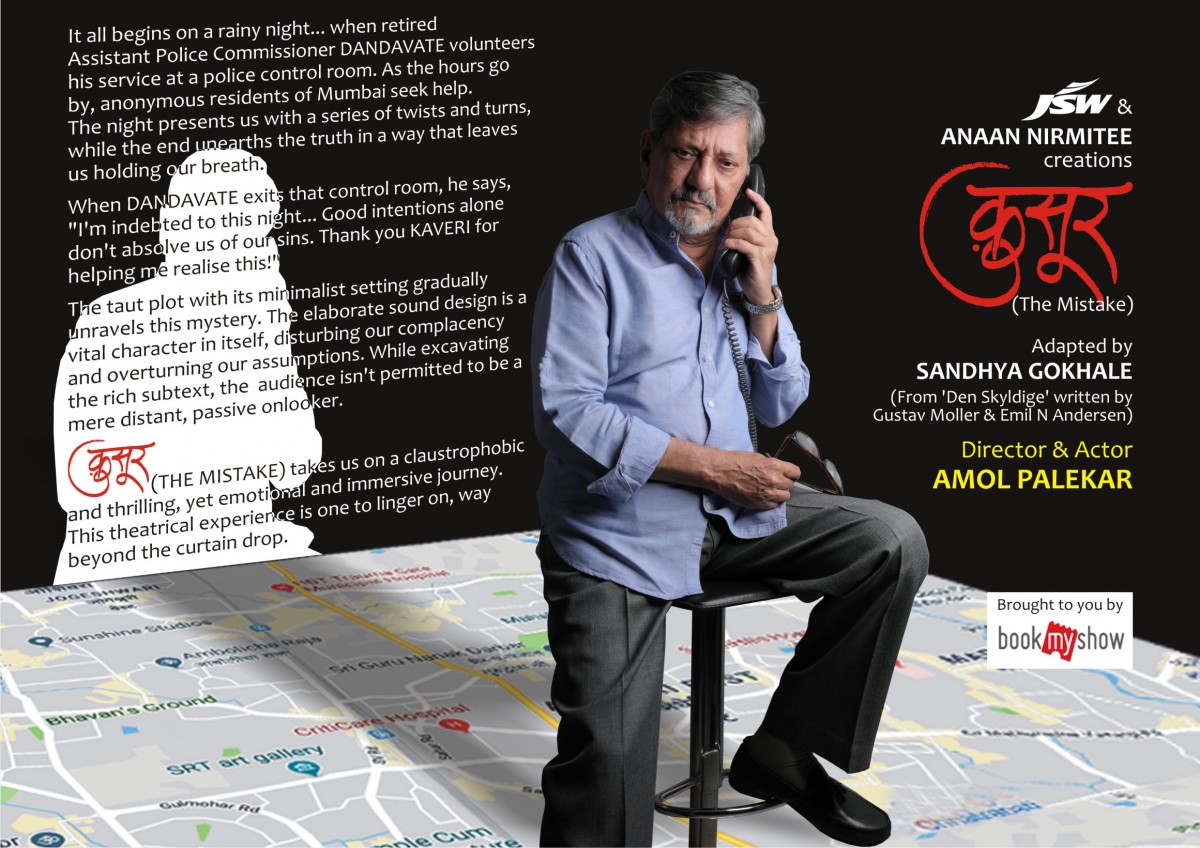 A poster for ‘Kusur’.

The story revolves around a retired assistant police commissioner who wishes to contribute to society almost as a penance. Therefore, he has chosen to serve in a police control room to help people in distress. Gokhale cleverly exploits his reticence to convey unspoken tensions not only in his professional life but also in his emotional universe, likely permeated by memories of past turmoil.

As a result, the atmosphere on stage is fraught with tension throughout. On the surface, it seems to be only about his demanding, yet thankless, job of assisting people who are in need of urgent help. But it has a deeper subtext: it reflects the societal peril looming over us, in the form of prejudices that have gradually acquired an all-pervasive status.

Almost right away, Gokhale hands over the baton to Dandavate. Seventy-five-year-old Palekar (for whom this play marks a ‘comeback’ to theatre) runs with it in an instant, like only someone of his stature and experience can do. The phone lines ring at a regular interval, mishaps are reported and time is ticking away, exactly like Dandavate’s life…well almost.

Dandavate responds expertly, though struggling to meet the pace of the demanding calls. A self-aware and dependable man of the world, who like his grey hair and weathered face brings respectability to the table. He keeps his composure while chiding his younger subordinate for being uncouth, and is only a tad informal with the friend who visits him the night before their trial begins. He maintains his distance, and his calm, dispassionate demeanour. Like his ironed, manly exterior.

But nothing is as it seems in the world we inhabit. Almost immediately, Gokhale’s screenplay begins to prod at Dandavate’s inner world. At first gently, in an unobtrusive manner, and then more insistently. This veneer is thus about to crack in a matter of a few hours, stimulated by an anxious phone call from a member of a helpless family in distress.

The dutiful officer (and also the protective man) in Dandavate rises to the occasion instantaneously. He takes charge and starts barking orders, consoling the young voices on the other side who are scared out of their wits. The story unfolds through and between the conversations Dandavate has with various unknown callers.

In the process, we are offered a ringside view of the modern world through the eyes of an officer of the law who has been relegated to a menial job. This is a world that has been partitioned in the name of barriers like religion, caste and gender.

All the questions Dandavate is asking the family members on the other end are, in fact, questions he is posing to himself. And therefore, the answers reveal small details about the situation at hand but also about Dandavate (and all the others who empathise with him). The questions get progressively uncomfortable, and the answers in turn, unbearable.  These queries are challenging his carefully cultivated value system, his beliefs, his perception of the truth and thus ultimately his humanity.

It is to Gokhale’s credit that this drama, while unfolding, allows the same questions to knock at the viewer’s doors. Palekar is in absolutely top form here. He gives Dandavate an ageing but firm body, and importantly a damaged soul that is terrified of peering inward even under duress. He gives the character a unique identity, using specific mannerisms and nervous ticks.

Also read: Theatre of the Liminal – Where the Real and Imagined Worlds Meet

When the inevitable ultimately is upon Dandavate, his transformation is at once devastating and just. Palekar does not reduce Dandavate into either a sympathetic figure or a villain. Despite the early bravado and a continuing façade, Dandavate is essentially a flawed and timid human being – perhaps like most members of the audience. He is an officer who has not been able to resist the caustic malice of religious hatred.

Naresh Suri, who plays Pande, a colleague and friend from the yesteryears, is also effective in a small yet significant role. The audience gets to see two contrasting acting styles when Dandavate and Pande face off on the stage.

As the resolution of the crisis engineered by Dandavate is in its final act, the turn of events ultimately coerces him to peer into a mirror. He is horrified and disgusted by what he sees. Post-meltdown, as the guilt-ridden Dandavate walked out of his cabin leaving behind his bewildered colleague (and perhaps, an equally puzzled audience), I wondered if he is going to be able to pick up the scattered pieces of his life.

At what point in one’s life is it possible to face the shadows from the past, the ghosts of prior bad acts? Did he wish for redemption in the form of a punishment? And what is the appropriate punishment for majoritarian prejudice-based justice, if there exists one?

Girish Deshpande is a faculty member in the Department of Molecular Biology at Princeton University, USA.