"Here are a few couplets of mine that I had written keeping you in mind. I want you to paint them when you have the time." 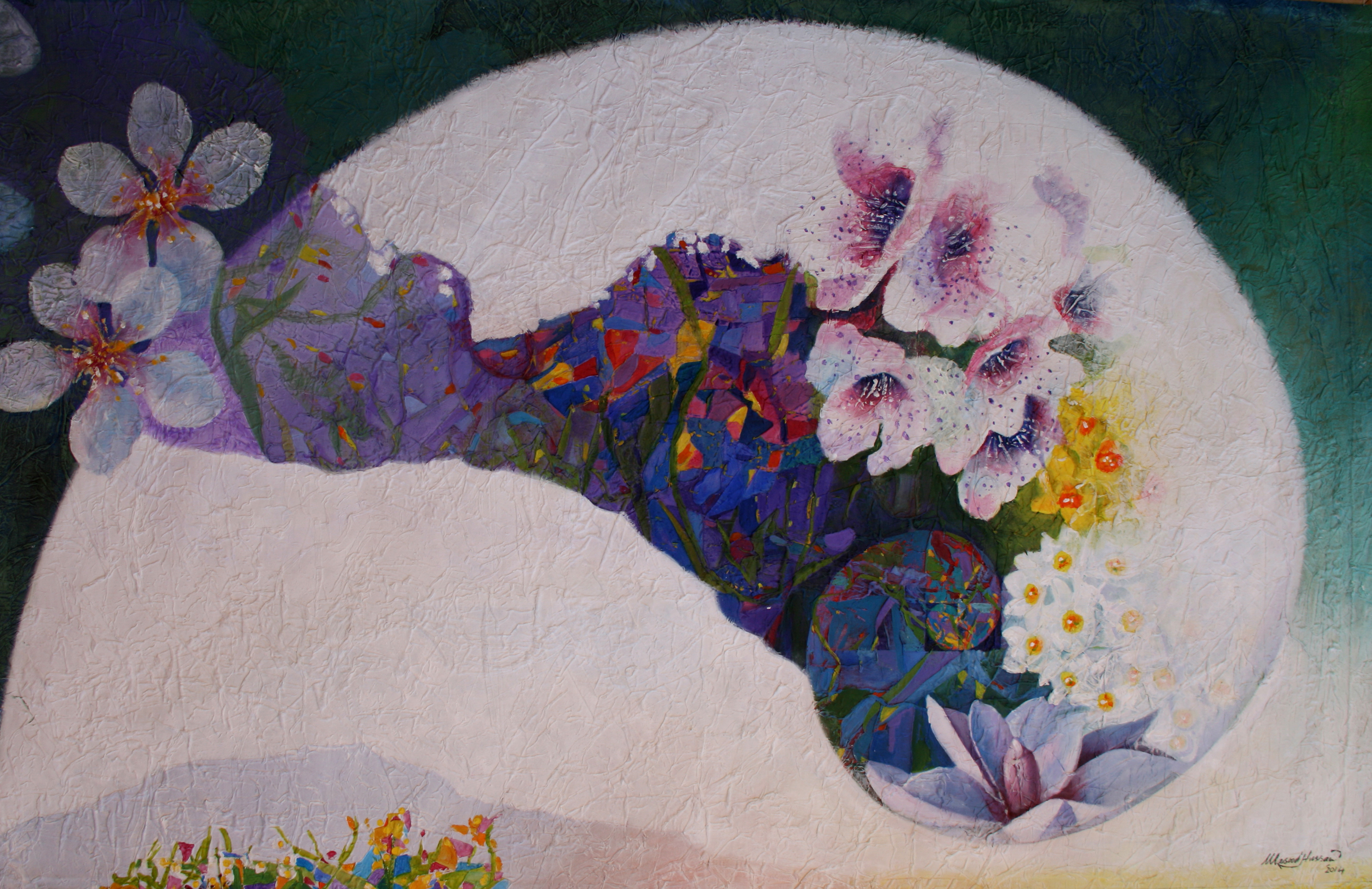 Shahid – Agha Shahid Ali (February 4, 1949 – December 8, 2001) – and I met in the summer of 1997 when he was working on his celebrated collection of poems, The country without a post office. He wanted to use my relief work as the cover image for his book. The cord of similar thoughts, ideas and love for Kashmir that bound us in a deep friendship live on in my heart.

I clearly remember my last meeting with him in the summer of 2000 at his residence in Rajbagh in Srinagar. He was sitting on the veranda overlooking his garden, typing away on his electronic typewriter. After a couple of minutes, he handed me three sheets of paper, saying here are a few couplets of mine that I had written keeping you in mind. I want you to paint them when you have the time.

To my surprise, the couplets were about the beauty of Kashmir – they presented a contrast from the nature of our works which largely were a testimony to the ongoing turmoil in the Valley. These couplets gave me a feeling of hope at a time when there was none.

I kept the three sheets of paper safe in a file that was never far from me. Our last conversation, in 2001, was held across continents – he was in a hospital in the US where he was undergoing treatment for brain cancer and I was in Srinagar. I telephoned him to enquire about his health; he asked me to pray for him. The next news I received was of his departure from this world, on December 8, 2001.

Shahid’s seven couplets remained with me for years as an unfulfilled dream trying to find the right hues to manifest themselves. In the meantime, the feeling of hope that his couplets had kindled in me, found expression in a painting titled Hope, which, fittingly, was the concluding work of my series titled Resurrection of a time past. This series was exhibited in Delhi’s Art Heritage gallery in March 2005.

It took me 14 years to fulfil my friend’s wish. The thought of not being able to devote enough time for it burdened my heart for 15 long years. Finally, when I had completed the seven canvases, they came close to being destroyed by the 2014 flood, a fate suffered by many of my works. I kept this precious bundle, work born of the words written by Shahid years ago, in the only place the water would not be able to reach.

The wish of my friend is now fulfilled.

My friend, Kashmir still looks hauntingly beautiful to me, but every beautiful thing still reminds me of the misery and pain that never leaves us alone.

At the gates of paradise

Yes, that is where you are. Open them softly…and you see that you can multiply variety: what carvings, what intricate designs, what refinements of paisleys! Kashmir awaits you at its gates and only hospitality is our style…

In this painting, I have painted a red kani shawl flying in the sky, casting a dark shadow over the gates of paradise. The kani shawl depicts a craftsman’s lifetime of painstaking work that is clearly visible in their intricately woven designs. It is a fabric that has covered the wounds of Kashmiris for generations. Its red colour is symbolic of bloodshed, death and destruction.

What measureless measures, the colours of fire clinging to the chinars, to the reflections of chinars, to your eyes as from them you see the last grand crimsoned spillage… The chinar tree, which has for long epitomised Kashmir, is one of its kind in grandeur, volume and height. It is almost as if these trees have been watching over the whole of Kashmir, witnessing our history since the age of the Muhgals. The crimson tinge of fallen leaves around the trunk spread out like a carpet, reminding me of a wounded man being dragged by someone on the leaves, leaving behind a trail of blood.

Such tinted distances that you can touch the shades that have disappeared till summer! The coming cold testifies to the earth’s fidelities, stronger here than anywhere else…

To paint on the theme of this couplet I was not content with the sketches of mountain ranges that surround our Valley. I also never imagined that there was much more to see beyond these ranges until I visited Gurez Valley in 2013. That visit, which needed special permission, made me feel as if I was a foreigner in my own land.

What I saw was huge pyramid-shaped mountain in the centre of Gurez Valley, with the tinted shades of mountain ranges behind it vanishing into the sky. The early morning sun that rose behind the mountain cast a strong reflection on the crystal blue river flowing in front of it, forming a perfect square, half in water and half in air. To me it seemed as if the four corners of the square have been witness to the four seasons since the days of the famous Kashmiri poetess Habba Khatoon – Nightingale of Kashmir – after whom this mountain has been named. The 16th century poetess is believed to have disappeared in this mountain looking for her lover Yousuf Shah Chak, ruler of Kashmir, who had been imprisoned by Emperor Akhbar.

I could not have envisaged a better subject for this painting. The red and orange shades that dominate at the foot of the mountain are symbolic of human intervention that has destroyed the delicate ecological balance of this valley by installing a power project in the area.

Snow gleams as if a lover’s gaze has fallen to earth. How the season whitens! Even the evergreens are peppered with salt, and only love can take the place of the mountain.

The moon appears from behind the clouds, its strong light falling on the snow and isolated homes, making them glow with a yellow and orangey light. They somehow remind me of the shadowy gunmen crossing the snow covered fields surrounding these homes. Through a loudspeaker they demand that the residents, who are in deep slumber, assemble in the open field and sit on the crispy snow for an entire day, their feet numb with cold.

A mind of winter for the vale

Find the invincible summer in your heart when you, in the depths of winter, come to the slopes of the Vale where even gods have sought refuge…and then regard the frost and the pines crusted with snow.

In the deep winter months, humans – and their minds – are cocooned in deep slumber to blot out any violent noise and to protect themselves from the harsh iciness of their surroundings. The gods, too, seem to have done likewise, taking refuge in the lonely temples.

Again, the festival of blossoms: first, the almonds, those ancestors of paisleys. And then? Hold your breath for the naricissi, the magnolias, the roses, the gladioli… In a perpetually snowbound state it may appear to be wishful thinking on my part, and on the part of millions of others like me, to raise our eyes heavenwards and pray that the long winter which has chilled us for so long, makes way for the fragrance of spring to spread far and wide – the fragrance of hope and of peace.

They conspire so that someone, on the shores, awaits the vendor of flowers. And the other side of earth awaits Kashmir’s sun, its message that water and fire are at peace.

‘So that someone, on the shores, waits…’ I see the long wait, from sunrise to sunset, of the shikara walas, who return home disappointed every day as there are no tourists to take around or sell bouquets to. The shikaras parked on the shores of the Dal Lake seem to give a misleading impression of calm in a world that has long been burning.