P.S. Jaya painted herself black and roamed Kochi's streets for 150 days – bringing the public face-to-face with their prejudices and sparking a critical debate on her 'Artivism.' 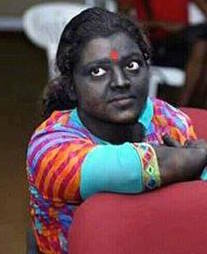 In 2013, Petr Pavlensky, a Russian activist who had already made headlines for his cringe-worthy performances – in one, he wrapped himself in barbed wire, in another, he sewed his lips together – went beyond even his own standards by nailing his scrotum to the Red Square. He did this to protest the policies of the Putin administration.

A year later, he went further by cutting off his right earlobe, this time protesting the use of forced psychiatry on dissidents.

In 2011, artist Alice Newstead suspended herself with metal hooks inserted into her body in front of a London cosmetics company as a form of dissent against the usage of shark products for cosmetics and food stuffs. About half a decade before Pavlensky and Newstead, in 1959, John Howard Griffin treated himself with drugs and sunlamps in order to pass as a black man – his way of attempting to understand and study the plight of African Americans in the deeply segregated areas of the southern United States. His experiences were later published in the book Black Like Me.

Of course, there are differences, both apparent and subtle, between these performances’ approach and aims; each is also unique and complex in itself – no doubt the artists themselves would argue this and object to any kind of collective classification. Pavlensky and Newstead’s performances could be characterised as corporal self-punishment, while Griffin could be said to have engaged in bodily appropriation. That being said, it is Griffin’s work that could be correlated to the recent performance of the 26-year-old Kerala artist P.S. Jaya. Outraged by the death of Dalit scholar Rohith Vemula at Hyderabad University, Jaya painted herself black each day before stepping out onto the streets of Kochi, for 150 days starting in January 2016. By the time it ended, her performance had elicited the result it desired: she had sparked a debate, albeit a highly polarised one.

The mixed reactions to the performance of the public and the intelligentsia throw light on the challenges posed and faced by ‘Artivism’, or the wielding of art to converse with the public on issues of socio-political relevance.

Over the past few years, this form has witnessed a resurgence, with the emergence of new-age filmmakers, writers and artists confident enough to jumprope within the narrow boundaries between the commercial and the art house.

On social media, visual artists have made strong public statements decrying governmental inaction on the brutal rape and murder of a Dalit woman in Kerala, with the help of minimalist posters that were later used in protests. A collection by one of the movement’s main proponents, Nipin Narayanan, is set to be published in book form.

In the field of film, award-winning director Sanal Kumar Sasidharan heralded a new era in the Malayalam film industry with his production Off Day Game. Unprecedentedly realistic, the movie was compelling, ominous and unforgiving in its critique of discrimination and corruption. The multiple award-winning film went on to become an unexpected success at the box office.

In her own words

Jaya’s intention was to trigger a discussion among the general public on caste- and skin colour-based discrimination. “The collective conscience of the public always relates darker skin with the lower castes. With the use of black paint, I am merely mirroring these pre-conceptions and raising my voice against such notions,” explains the artist, who herself is not a Dalit. Children look on as Jaya walks the streets of Kochi with other artists. Credit: Facebook

She is currently writing a book on the daily discrimination she faced during her 150-day performance. She hastens to add, however, that her experience could in no way be compared to the day-to-day problems faced by the Dalit community. “Their issues cannot be trivialised to merely [discrimination based on] skin colour,” she says. This disclaimer comes as no surprise, given the highly polarised reactions the performance prompted. Prominent Dalit and tribal activists like M. Geethanandan and Dhanya Raman proclaimed their support for the cause. “Growing up, I still remember how kids as young as three years catcalled my grandfather, a man with a very dark complexion, using his name ‘Kariyan’,” said Raman.

In contrast, Vaikhari Aryat, a Dalit scholar and classmate of Vemula at Hyderabad University, wrote a scathing article in Malayalam decrying the entire experiment as damaging to the self-respect of her community. Calling the project an attempt at the “race bending” or “white washing” prevalent in Hollywood, she says the exhibit debased the Dalit community.

“This project equates the entire community to those with dark skins, a laughable ignorance of our identity. What is the difference between the police officers who distinguished the Muslim students who participated in the [Hyderabad Central University] protest as ‘Pakistanis’ and terrorists’ and this performance which strengthens the race and caste based notions of the collective public morality?” she questions.

Another Dalit activist, Mridula Devi, echoes her concerns. “In many spheres, the scheduled castes have risen up to the level of Savarna communities. With all respect to the artist, I feel that the project has merely fortified the wrong notions among the public,” she says.

A similar controversy enveloped a recent art exhibit in the US by a Mormon painter who depicted a nude black Eve with a bitten apple. Praised initially as racially groundbreaking in the art scene of the Latter Day Saints (LDS), the painting was later criticised by a section of feminists and the African American community. A report in the Salt Lake Tribunal cited critiques of the image as portraying an exoticised Eve, a black woman who finds herself naked at the hands of a white man. “White nudity is completely different than black female nudity. Black women and nudity equal nakedness, sexual brutality and enslavement,” Mica McGriggs, a doctoral candidate in psychology at the LDS Church-owned Brigham Young University says. “Unless it is carefully crafted by another black woman, it is a type of pornography that white people flock to fund.” Bryndis Roberts, a black convert to the Church of Jesus Christ of Latter Day Saints, says that the depiction focuses more on Eve’s breasts than her face, far too similar to pictures of black women on the auction block. By minimising Eve’s facial features, Roberts says, “you are essentially erasing the personality of all black women, just as we have been historically erased.”

There is no denying, however, that Jaya’s exhibit has opened a can of worms for a self-anointed Left, progressive state like Kerala, which boasts the highest literacy rate in the country.

The artist recounts numerous experiences of discrimination: “Once in public transport, an elderly woman called me a ‘Poothana’ [a female demon in Hindu mythology], because of the colour of my skin.” Similarly, “just one or two weeks into my performance, I had entered a supermarket where they were already familiar with me as a customer. The employees started laughing and pointing fingers, commenting on my appearance and clicking pictures on their mobile phones. Soon, the other customers in the shop started laughing along.” On yet another occasion, a Dalit girl, also dark-skinned, struck up a conversation with her on a bus. “She was very interested in art forms like dance, but discrimination on the basis of caste and skin colour in her school makes it very difficult for her to follow through with her interests.”

Initially, the strange looks and comments passed weakened her will to plod on with the project. “There were some days I feared I wouldn’t be able to complete the 150 days,” she recalls.

Kalakakshi, a collective of 25 painters, musicians and writers of which Jaya is a member, stands firmly behind her performance, as captured in the words of one member:

“Art should be countered with art. If anybody has any problems with the manner in which Jaya conducted her performance, they should retort in kind. Our sole intention is to converse with the general public with the help of such performances, not to engage with academia or intelligentsia of any sort. To that extent, we believe her performance to be a success. Moreover, the discussion sessions which were held after the exhibit, featuring numerous Dalit and tribal activists, was an eye opener with regard to the treatment of such subjects. In a state with proud traditions of strong left-wing theatre groups like Kerala People’s Arts Club, art has to evolve enough to intervene in the socio-politics.”

What examples can be found in the history of Kerala with this modern-day resurgence of ‘Artivism’?

Very few, according to noted art historian Vijayakumar Menon. “If you look at the history of Kerala,” he says, “visual language had never been encouraged in the early days, except in the context of temples or other places of worship. It was Raja Ravi Varma, who initially had been criticised as a stooge to the British, who pioneered a ‘silent revolution’ by democraticising art and helping it reach every corner of the country. His influence is made clear by, for instance, the reference to his style in the preface of Indulekha, the first major novel in Malayalam by O. Chandu Menon. Art first became an effective tool of resistance during the independence struggle. After the 1980s, it became a norm for artists to explore every topic of relevance to society.” When Lord Curzon decided to partition Bengal in 1905, artists resisted strongly. Abanindranath Tagore painted the epic Bharat Mata, four-armed and indigenous – a style completely different from that of Varma’s works, which were influenced by Western realism.

“The painting caused a political revolution of sorts,” says Menon. “There were also artists like Chittaprosad, who created graphic prints on topics like the 1940 Bengal famine, and Pradosh Das Gupta, with his sculptures which represented India in bondage.”

After the emergency was declared and lifted, Menon explains, there came a radical change in artists’ visual language. Almost every subject of socio-political importance would come to be explored through art – the Muthanga incident, for instance, when police fired at tribals agitating for land and killed one, and the Marad massacre, the Hindu-Muslim riots that claimed seven lives, both of which took place in Kerala in 2003. A notable exhibit on the Marad massacre was by the Thrissur-based artist Lathadevi. When the Babri Masjid was demolished, countless artists, including Ghulam Mohammed Sheikh and Nalini Malani, reacted. “The works by Jaya are in keeping with this tradition of resistance and should be supported,” Menon says.

In recent years, narratives of communities like those of the Dalits and tribals have found their place in public discourse like never before, owing mainly to incidents like the rape and murder of the Dalit woman student and the incarceration of two Dalit girls and an eighteen-month-old baby in Kannur.

“Only in the past two years have such issues found their place in mainstream discourse. When the Muthanga incident happened in 2002, not even the media was fully aware of the problems that the tribals faced,” says Raman.

Kalakakshi maintains that no matter what the opposition, the work will go on. “We will be forming broader collaborations with other groups like ours,” says one member. “There is already a visible change, in that the public functions have started giving centre-stage importance to the process of art along with the artist.”